Many people consider tropical islands mini-paradises: sanctuaries cut-off from the rest of the world. Some species flourish on islands for the same reason. With few predators and a largely consistent environment, once a species has comfortably adapted to its habitat there’s little to do but thrive. That is until something changes: like humans showing up. Changes in confined island ecosystems often have large and rapid impacts, too fast and too big for marooned species to survive.

Numerous island species have vanished in recent centuries due to this very fact: stuck in a small ecosystem that doesn’t suffer change lightly. Sometimes it was due to direct human impact, other times it was what the humans brought with them: rats, dogs, cats, disease etc. For example, the moa-nalo, giant duck-like megafauna in Hawaii, was likely hunted by humans to extinction; the dodo bird probably succumbed to predatory animals that humans brought with them to Mauritius’; and the Falkland Islands’ wolf is though to have been killed-off by fur traders and shepherds. These marooned species have vanished forever, but the Critically-Endangered pygmy three-toed sloth of Escudo Island hasn’t—at least not yet.

As per their name ‘pygmy’, the Escudo sloth is the world’s smallest sloth, about 40 percent smaller than its mainland relatives. They are also, according to sloth-expert Bryson Voirin, the most laid-back.

“While mainland sloths will fight with you or run away if you are trying to capture them, pygmy sloths have had no contact with the outside world for 10,000 years. When they see me they have no clue what to think. They must just think I am some big, very strange sloth coming to say hello,” Voirin told mongabay.com.

Not described by scientists until 2001, Voirin is one of the few researchers to have spent significant time studying the island sloth.

“Working with a genetic lab in Brazil, we recently found a species specific genetic marker for Escudo sloths. This genetic mutation is found only in Escudo sloths,” Voirin says, explaining the fruit borne by a number of his studies. “A research colleague in Finland has classified the algae found in the fur of Escudo sloths, and found it is related to that of other sloth algae. Amazingly, this algae can withstand saltwater! In my sleep research, I recently completed a study comparing sleep in mainland sloths experiencing high predation by nocturnal cats (ocelots, etc) versus sleep in Escudo sloths, which have no predators. We found that Escudo sloths were more likely to be active at night, which would suggest that they are less afraid of being eaten by nocturnal cats.”

“To get there, you have to take a boat several hours into the middle of the ocean,” Voirin says. “Then, when your boat hits the sand bar, you have to jump out and hike through the mangrove swamp, trying not to get stuck in the deep muck. The whole area of mangroves on Escudo is only a few acres, so it is not all that big. But it’s surprising how well camouflaged these sloths are. They blend in almost perfectly! You can be looking right at one, and you might not realize it for 10 minutes.”

Like most species confined to an island, the pygmy three-toed sloth has become a specialist, a mangrove-specialist to be exact.

“The mangrove trees are usually only about 10m high, so I tend to not use my climbing harness and ropes. I usually just scamper up the limbs and grab the pygmy sloths with my hands,” Voirin says, adding that though the sloths are calmer than their mainland relatives “they can still claw you pretty good.”

Despite being far from the mainland and perfectly adapted to their habitat, the sloths are in deep trouble due to recent invaders—humans.

“Local fishermen come over from the mainland and camp out on the island for a few weeks at a time. Unfortunately, they cut down the mangroves to use as charcoal for their fires at their campsite,” explains Voirin. “These sloths live exclusively in the mangroves on this one island, so every large mangrove tree is essential to their survival […] When I was out on Escudo this past summer, I saw about 25 percent of all the large mangrove trees had been cut down and burned. This normally uninhabited island was the temporary home to about 150 fishermen and their families (and dogs).”

Here is the tragic story of the moa-nalo, the dodo, the Falkland Islands’ wolf, and innumerable other island species being retold again on the little island of Escudo.

“It is heart wrenching to watch these locals thoughtlessly pushing the pygmy sloth into extinction, says Voirin. “Many times I have talked with them, and mentioned about the impact it will have to the animals. Their typical response is that when they are fishing and they don’t catch enough fish to eat, they eat the sloths. Considering the sharks, lobsters, and most game fish are nearly extinct around Isla Escudo due to unregulated fishing, I fear that pygmy sloths are becoming more and more of a staple food for the ‘temporary residents’ of Isla Escudo.”

Voirin explains it wouldn’t take much to save the sloth, but simply enforcing already established laws. While the government deemed Isla Escuda a National Park last year, “the locals continue to come pillage the land as they see fit, with no consequences in sight. Unless the government begins to enforce some basic regulations on these seasonal residents, such as ‘no cutting mangroves’, I would estimate the pygmy sloth has only a few years left on this planet,” he concludes

If Voirin’s prediction comes true then this ‘forgotten species’ may, like the dodo, only become known to the world after it has vanished forever. 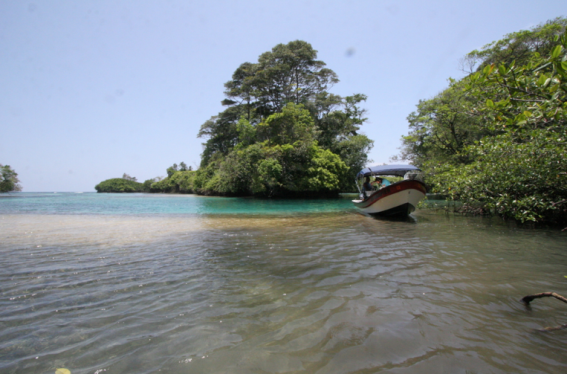 Visiting Escudo Island off the coast of Panama. Photo courtesy of Bryson Voirin. 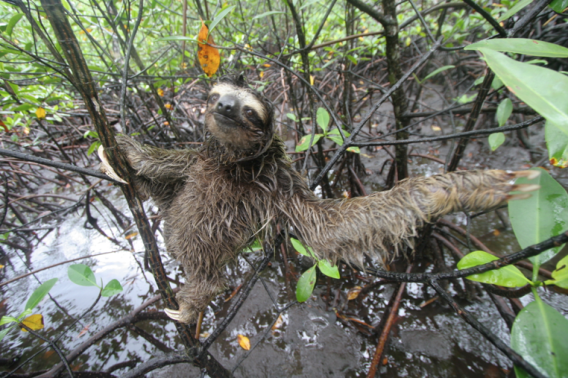 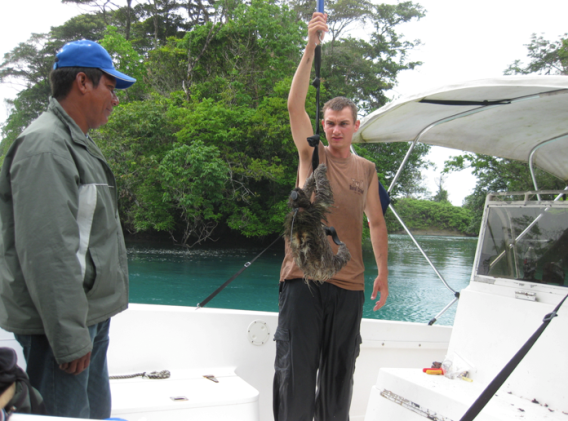 Bringing the sloths aboard for inspection. Photo courtesy of Bryson Voirin. 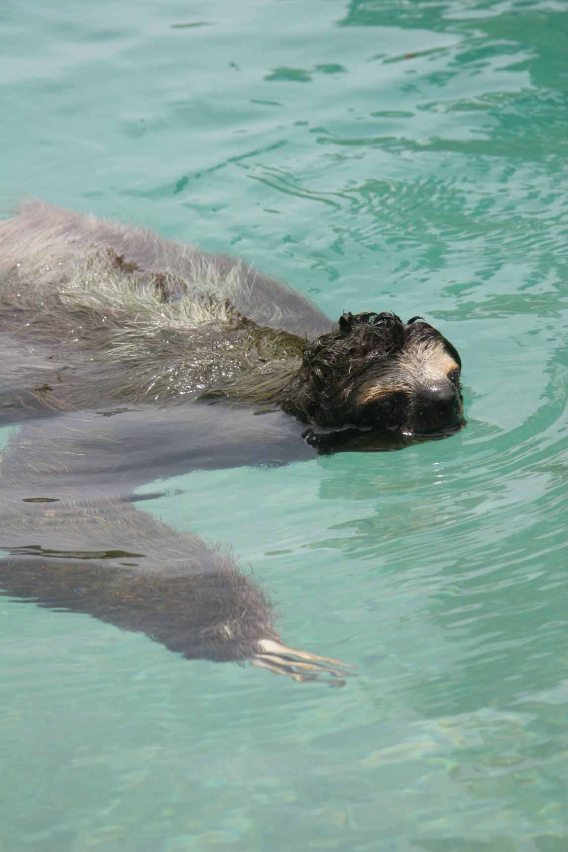 A second view of the sloth swimming. Photo courtesy of Bryson Voirin. 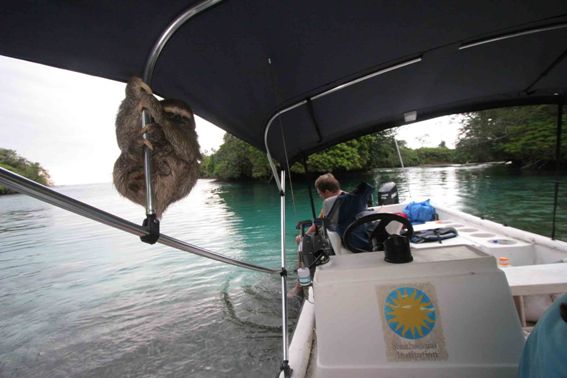 Pygmy sloth hanging on the boat as if it were a mangrove. Photo courtesy of Bryson Voirin. 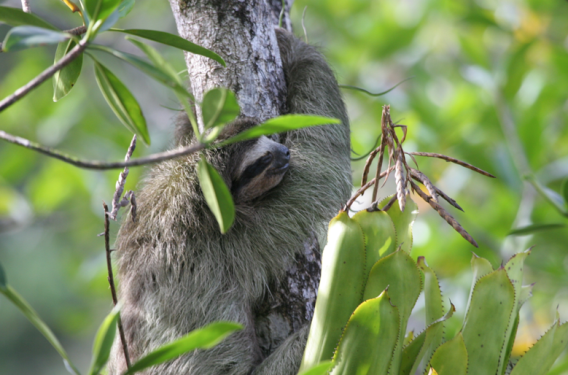 The pygmy three-toed sloth requires rapid action from the Panamanian government if it is to survive. Photo courtesy of Bryson Voirin. 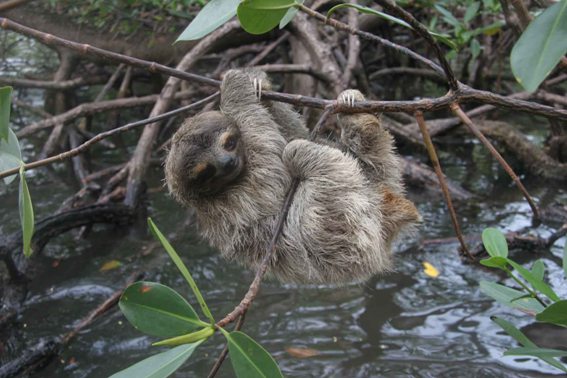 The faster, fiercer, and always surprising sloth, an interview with Bryson Voirin

(10/25/2009) Sloths sleep all day; they are always slow; and they are gentle animals. These are just some of the popular misconceptions that sloth-scientist and expert tree-climber, Bryson Voirin, is overturning. After growing up among the wild creatures of Florida, spending his high school years in Germany, and earning a Bachelors degree in biology and environment at the New College of Florida, Voirin found his calling. At the New College of Florida, Voirin “met Meg Lowman, the famous canopy pioneer who invented many of the tree climbing techniques everyone uses today.”

(05/14/2008) Wild sloths are considerably more active than their counterparts in captivity, reports the first electrophysiological study of sleep in a wild animal.