The Copenhagen Accord signed in December is widely seen as a disappointment. The Accord set no binding targets for greenhouse gas emissions targets and did not even commitment to a legally binding treaty in the future. Serious work is needed to bring the process back on track.

But some progress was made. Countries agreed on international monitoring of emissions (a point of conflict between China and the United States) and funding (rich countries pledged $3 billion a year for the next three years and up to $100 billion a year by 2020) for mitigation and adaptation in developing countries. Furthermore, there were gains for the REDD mechanism, a U.N.-backed plan to compensate developing countries for reducing emissions from deforestation and degradation.

While the underlying concept of paying tropical countries to protect their forests as a climate change mitigation strategy has been around for decades, REDD’s rise to prominence over the past four years has been startling.

REDD arrived on the international stage during climate change negotiations in Montreal in 2005 when the Coalition of Rainforest Nations—a group of tropical countries led by Papua New Guinea and Costa Rica—argued that reducing deforestation could be developing countries’ commitment to climate change mitigation. The potential co-benefits of REDD—including biodiversity conservation, provision of ecosystem services, and a new development model for sustainable enterprise in the rural tropics—made the concept appealing to a wide range of interests and won it broad, if still tentative, support. By December 2009, REDD—which had evolved to become REDD+ (reducing emissions from deforestation and degradation, conservation of carbon stocks in low deforestation countries, sustainable forest management, and afforestation/reforestation)—was poised to become a central part of climate talks in Copenhagen.

Sure enough, REDD was one of the few areas of progress in Copenhagen. While explicit deforestation reduction targets and a framework for REDD failed to emerge from the conference, the resulting operational text does include provisions on indigenous rights, biodiversity, and natural forests—critical concerns going into discussions. The text allows sub-national projects to serve as demonstration projects and sets reference levels for determining deforestation baselines. Although some important issues remain unaddressed, including a definition of sustainable forest management and resolution on long-term financing, six countries pledged $3.5 billion over three years to fund activities needed to lay the groundwork for an eventual REDD mechanism.

The U.S. share of the commitment—$1 billion—was announced at a side event put on by the Avoided Deforestation Partners, a group pushing for a strong role for forest conservation in U.S. climate policy. But the U.S. announcement wasn’t the only big news at the Avoided Deforestation Partners event. Google unveiled a partnership with the Carnegie Institution for Science and IMAZON to make advanced deforestation tracking tools available to tropical counties. The technology could eventually allow near real-time monitoring of deforestation across large swathes of the tropics. 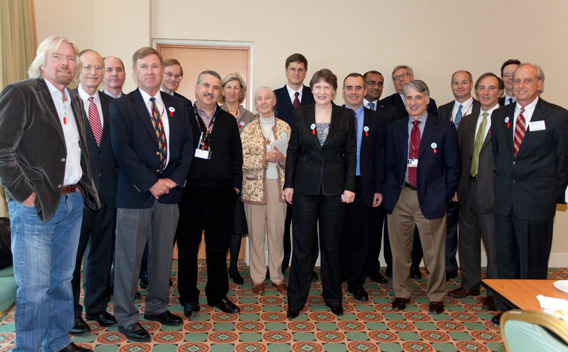 It may seem surprising that such an esteemed group would come together to discuss deforestation, but Jeff Horowitz, founder of Avoided Deforestation Partners, says the gathering is a testament to the opportunity tropical forest conservation offers in helping mitigate climate change.

“People are finally getting to the point where they understand that we can’t solve the climate change crisis without solving the deforestation crisis,” Horowitz told mongabay.com. “The core group who participated at our AD Partners high-level event is made up of people who are passionate about the need to protect forests in order to save our climate – and that group is getting larger and larger.“

Horowitz says that forest conservation now figures prominently into U.S. climate legislation, offering an opportunity for the United States to take a leadership role on the issue, provided Congress can pass a climate bill. On this front, he is hopeful. Horowitz believes rainforest protection can make the bill palatable to a broader range of lawmakers by reducing the cost of emissions reduction and “buy[ing] us critically important time we need to make the transition to the clean energy economy of the future.”

In a February 2010 interview with mongabay.com, Horowitz discussed the process of coalition-building and his outlook for forest conservation in U.S. climate legislation.

AN INTERVIEW WITH JEFF HOROWITZ

Mongabay:
The AD Partners meeting turned out to be one of the marquee events in Copenhagen. How did you pull together such a strong and diverse group?

REDD has arrived! People are finally getting to the point where they understand that we can’t solve the climate change crisis without solving the deforestation crisis. The core group who participated at our AD Partners high-level event is made up of people who are passionate about the need to protect forests in order to save our climate – and that group is getting larger and larger.

Also, many developed countries are starting to realize that there is no way to meet this great challenge without the participation of the developing world, which means funding activities like tropical forest conservation. Of course, it also helps that countries such as Norway and now the United States (and others) are prepared to put real dollars on the table in advance of a UN agreement. Saving forests must truly be a global effort.

Lastly, it is important for everyone to see the enormous support that has resulted from different sectors of society all coming together. For REDD to succeed, it will require a partnership that bridges government, NGOs, scientists, and the private sector.

Mongabay:
Most people seemed pretty disappointed with the outcome in Copenhagen. Did you see signs of progress in the effort to advance forest conservation as a way to fight climate change?

There is no question that REDD took a very significant step forward at Copenhagen. The challenge now is to operationalize the commitments across the board, not just with REDD. The resounding endorsement of the need for REDD as part of the solution and the inclusion of financial commitments earmarked for REDD should be viewed as a very positive sign of progress.

We were particularly pleased to see the United States take a leadership role on REDD at our event. Secretary Vilsack’s $1 billion pledge was an important signal and immediately triggered other countries to step up with an additional $2.5 billion in REDD funding. We are now working closely with all parties to help insure that these funds will be used wisely.

Conversation about the urgency of REDD+ and the International Framework. Photo courtesy of AD Partners and Jacob Crawfurd, photographer.

Mongabay:
How does REDD figure into proposed U.S. legislation? What needs to happen on a legislative front to get the proper incentives in place?

Jeff Horowitz:
Thus far, REDD is playing a major role in the US legislation. Last spring, AD Partners assembled some of the largest U.S. environmental and conservation groups and major power companies. Our goal was to reach a consensus on how to include tropical forest protections in U.S. climate policy. That process yielded the Unity Agreement, consisting of 14 principles intended to guide international forest protection legislation, and the formation of the self-governing Tropical Forest Climate Coalition (to view agreement go to www.adpartners.org).

The Coalition worked hard to ensure the inclusion of forestry provisions consistent with the Unity Agreement in the Waxman-Markey climate bill. Currently, AD Partners and the Tropical Forest Climate Coalition are all working on a common strategy to advance the climate change bill in the Senate to parallel gains made in the House version of the bill.

We believe the legislation’s tropical forest protections can attract more senators to support the overall climate legislation because they cut the cost of the legislation in half while allowing the United States to meet reasonably strong pollution reduction targets. Because protecting rainforests is an immediate and scalable solution, it buys us critically important time we need to make the transition to the clean energy economy of the future.

Mongabay:
Do you think that once the U.S. policy has a REDD policy in place, the rest of the world will largely follow suit or do you see the potential for competing systems and conflict?

Jeff Horowitz:
I believe that in the area of climate forest protection, the United States has an opportunity to lead by example. Once we have climate legislation in place, there are obvious opportunities to provide models that other countries may wish to follow.

Mongabay:
What do you see as the biggest hurdles/challenges domestically?

Jeff Horowitz:
Getting 60 or more U.S. Senators to vote for a comprehensive climate change bill is the biggest current challenge. We are working with many members and staffers to support strong international tropical forest protection provisions as a way of helping the Senate bill gain support for REDD. Many still do not know the full range of benefits that tropical forest provisions offer the American people. Beyond the obvious and most significant benefits of reducing pollution, saving our biodiversity and protecting forest-dependent communities, protecting tropical forests will cut the cost of U.S. climate legislation almost in half — saving Americans billions.

Mongabay:
There seems to be growing concern about dodgy REDD deals taking place in an unregulated market (i.e. PNG). Do you feel that a strong U.S. REDD policy will help mitigate these by establishing a legal framework for carbon projects?

Jeff Horowitz:
No system is perfect. Policy makers must work toward creating rules that root out fraud. In all cases, and especially REDD, we must have transparent pay-for-performance mechanisms which guarantee that all carbon projects that receive credits produce measurable and verifiable climate benefits. To date, there has been excellent progress in creating voluntary carbon standards for REDD in advance of a compliance system. The scientific, conservation, and policy communities have learned an enormous amount from early demonstration projects, and you can now see that knowledge being put to use in more than 100 forest carbon projects around the world. These exercises will help ensure that practical and effective regulations will be adopted as part of a US policy framework. I am confident that U.S. legislation will set appropriate standards, from verification and legal frameworks to environmental and social integrity.

Mongabay:
Activist groups are campaigning against cap-and-trade and the concept of “offsetting” emissions? Is there a way to alleviate some of the concerns that the inclusion of forest carbon will undermine efforts to curtail emissions?

Jeff Horowitz:
We’re working alongside many watchdog organizations to make sure that offsets are being used properly. Whenever possible, efforts must be made to reduce pollution at the source. At the same time, we all know that climate change has become an urgent matter – we need to make reductions in pollution as fast as possible if we’re going to avoid a global tipping point. There is no faster way to reduce pollution than by protecting forests.

While we’re making what I hope will be a very rapid transition to a clean energy economy, protecting forests is a way to buy time. We should remember that annual emissions from deforestation are approximately equivalent to the annual carbon emissions from the United States, and are a greater contributor to pollution than all the world’s cars, trains, planes, and ships combined.

We believe that a mix of policy measures, including market-based measures, can achieve this vital objective over a relatively short period of time. The fact that this solution is more affordable should make it highly desirable to everyone who cares about controlling the damaging effects of climate change.