Constructing a record of fires dating back to 1960 for Sumatra and Kalimantan (on the island of Borneo) using airport visibility records to measure aerosols or “haze” prior to the availability of satellite data, Robert Field of the University of Toronto and colleagues found that the intensity and scale of fires has increased substantially in Indonesia since the early 1990s, coinciding with rapid expansion of oil palm plantations and industrial logging. The researchers’ data shows dramatic spikes in haze coinciding with el Niño years, when dry conditions facilitate cutting, clearing, and burning of vegetation. 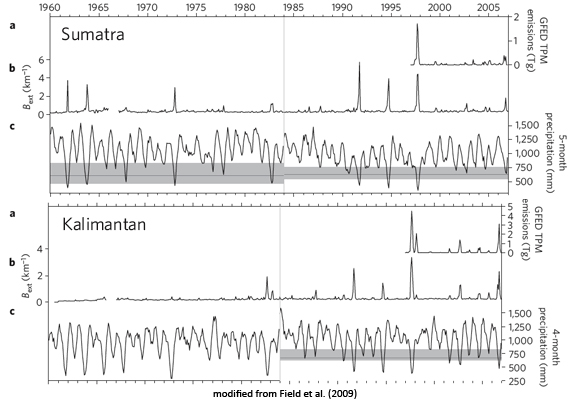 “We’ve had a good understanding of fire events since the mid 1990s, but little before this due to the absence of fire data from satellites,” said Field, who collaborated with Guido van der Werf of VU University Amsterdam and Sam Shen of San Diego State University. “However, one of the major impacts of large-scale fires is a reduction in visibility due to the smoke produced. Visibility is recorded several times a day at airports in the region, and these records proved to be an excellent indicator of severe fire activity. We were able to piece together visibility observations back to the 1960s, and hence develop a longer term record of the fires.”

The authors found that Sumatra has suffered from large fires since the at least 1960s, but Indonesian Borneo — where industrial conversion of forests was delayed by geography and politics — didn’t begin to experience massive fires until 1982.

“During the late 1970s, Indonesian Borneo changed from being highly fire-resistant to highly fire-prone during drought years, marking the period when one of the world’s great tropical forests became one of the world’s largest sources of pollution,” said Field. “Ultimately, this abrupt transition can be attributed to rapid increases in deforestation and population growth. The resulting occurrences of haze currently rank among the world’s worst air pollution episodes, and are a singularly large source of greenhouse gas emissions.”

The fires associated with the 1997-1998 el Niño released more than 2 billion tons of C02 into the atmosphere and caused billions of dollars to the regional economy. Undaunted by these impacts, last week Indonesia announced it will press ahead with a plan to convert millions of hectares of peatlands across Kalimantan, Sumatra, and Papua. Environmentalists and scientists say the move will trigger massive emissions and increase Indonesia’s susceptibility to fires like those documented in the Nature Geoscience study.

“The extent of large-scale oil palm plantations is projected to increase, partly to meet growing demand for biofuels,” write the authors. “As droughts are inevitable and may become more severe, Indonesia’s future fire regime depends strongly on the extent of these types of human activity.”

“This should give pause to further agro-forestry expansion in Indonesia, particularly for oil palm as a source of biofuel,” said Field.

Drought and deforestation in southeast Asia linked to climate change
(12/09/2008)
Researchers have linked drought and deforestation in southeast Asia to climate change. Analyzing six years of climate and fire data from satellites, Guido van der Werf and colleagues report that burning of rainforests and peatlands in Indonesia, Malaysia, and Papua New Guinea released an average of 128 million tons of carbon (470 million tons of carbon dioxide – CO2) per year between 2000 and 2006. Fire emissions showed highly variability during the period, but were greatest in dry years, such as those that occur during El Niño events. Borneo was the largest source of fire emissions during the period, averaging 74 million tons per year, followed by Sumatra, which showed a doubling in emissions between 2000 and 2006.

Clinton, Obama botch opportunity on climate, forest conservation
(02/20/2009)
The Obama administration squandered a chance this week to show U.S. leadership on climate and forest conservation issues, when Secretary of State Hillary Clinton, during a visit to Jakarta, failed to bring up a new Indonesian government decree allowing conversion of carbon-rich peat forests to oil-palm plantations.