Civil strife of Chad — a consequence of the calamity in Darfur — is taking a toll on the country’s elephant population, reports the Wildlife Conservation Society (WCS) which has launched an emergency appeal for funds to support conservation efforts in the country.

WCS estimates that organized poaching in Chad has wiped out two-thirds of its elephants. Ivory poachers using automatic weapons have decimated elephant populations living in and around Zakouma National Park, the last stronghold for the species in Central Africa’s Sahel region. Park rangers have also been targeted, although WCS says safety is improving.

“The situation in Zakouma is dire, but there is still time to save the park’s remaining elephants provided we can marshal the forces we need to stop poaching,” said WCS President and CEO Dr. Steven E. Sanderson. “We need to continue to work closely with Zakouma’s dedicated park guards and give them what they need to do their jobs, while our own field staff provide aerial reconnaissance and technical support.” 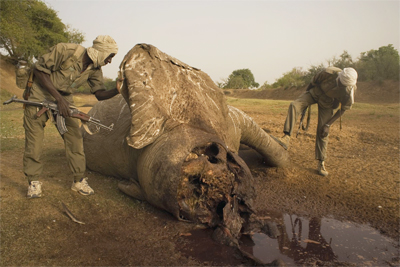 “Zakouma is a last stand for elephants in the Sahel,” said Mike Fay, a WCS researcher and National Geographic Explorer-in-Residence who led a ‘MegaFlyover’ of some of Africa’s last wild places two years ago. “It’s incredibly heartbreaking to stand before a dead elephant missing only its tusks. How can we stand idly by and watch this population continue to get slaughtered because of simple human greed?”

African elephant populations have fallen by 90 percent since 1900.