Tropical rainforests are declining across most of the world. Since the close of the 1990s deforestation rates have only accelerated as growing levels of consumption and consistent population growth paint an increasingly bleak future for the world’s forests and their resident biodiversity. These trends make it easy to lose hope. As such, stories that show local people earning a livelihood from biodiversity conservation are an inspiration.

Returning from his educational workshop in Ecuador, Dr. David Pearson, a research professor at the School of Life Sciences at Arizona State University (ASU) in Tempe, Arizona, offers a hopeful example of two Ecuadorian campesinos who prove sustainable entrepreneurship is not only possible, but profitable. 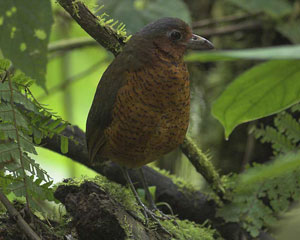 I was teaching a biodiversity workshop at the University in Loja, Ecuador, and one of the participants insisted we meet one morning at 4:30 am. Three of us drove to the crest of the Zamora road (about 25 minutes away). We were already at 10,000 ft in the paramo and started climbing away from the road. My Ecuadorian friends said “No falta mucho.” Then every time we got on our hands and knees and crawled through a tunnel of vegetation and then up another steep climb to the next crest, they said it again. Two hours later, 2000 feet higher, another kilometer of walking, and four crests farther, we came to a high overlook where you could see forever.

There below us 300 feet away were two Spectacled Bears. With the sun to our backs, the wind in our faces, and barely a cloud in the sky, we sat down and watched them feed for a half hour. We could have stayed longer, but the workshop classes began at 9 am. So slipping and sliding down the mountain we left them still eating tubers and leaves.

I never thought I would see a wild Spectacled Bear in my life, they are so rare and hard to see. Now maybe I really do have chance to see Jaguar as well. 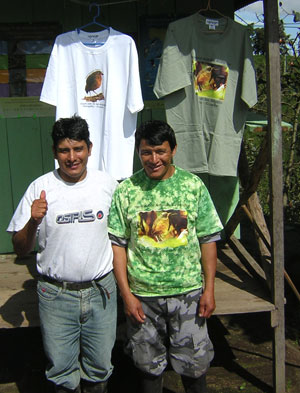 Pearson visited an ecotourism site for birders established by two brothers, Angel Paz and Wilson Rodrigo Paz located near Nanegalito, about and hour-and-a-half west of Ecuador’s capital city Quito. The Paz brothers once planned to clear their plot of cloud forest for agriculture but then discovered that the antpitta birds they hunted with slingshots loved disemboweled earthworms. They began to wonder whether these elusive birds could attract tourists to their land so they set up an ecotourist operation.

Pearson says that the brothers, charging $10 a tourist while permitting no more than 15 visitors a day by appointment only, now earn $5000 to $7000 a year, much more than they would have earned with their original plan to cut down the forest and grow fruit trees and bushes.

“Angel and Wilson said they will never cut it down now. The money is better and the work is easier,” reported Pearson.

Meanwhile there is also payoff for dedicated bird watchers.

“Antpittas are VERY hard to see under the best of conditions,” explained Pearson. “They are shy ground dwellers, and they tend to rely on camouflage and extreme wariness to escape their many ground predators. They are best known by their haunting calls and low whistles, but these tend to be ventriloqual and almost impossible to locate.”

“The Giant Antpitta is especially sneaky in its limited range, and up until the effort by these two men, they had been seen only by the luckiest and most persistent birders. Being able to see three species so well and so close is exceptional and a lifetime event for anyone who has spent hours trying to see even the most common species before. Usually they drift in silently on the ground showing an eye, or a back before disappearing in the undergrowth of the forest floor. They can seemingly hide where no bird should be able to.”

Pearson describes his own experience with the Paz brothers as an unparalleled one.

“They sat me down on the edge of a path in the cloud forest and started rattling a can of worms (disemboweled) and calling ‘Maria!’ In came trotting a Giant Antpitta (Grallaria gigantea) to beg worms at my feet, then two Yellow-breasted Antpittas (Grallaria flavotincta) came in and finally a Moustached Antpitta (Grallaria alleni). I have never had an experience like that. If that weren’t enough, one of the campesinos said, ‘Oh, by the way there is an Olivaceous Phia overhead,’ another life bird that had eluded me for 40 years.

“This is truly a fabulous story of business acumen by two Ecuadorians protecting the antpittas in Ecuador,” said Pearson. “This shows that self-driven, grassroots-level conservation can create livelihoods for local people.”

Contacting the Paz Brothers to make reservations for the antpitta site: