Currently, most energy production generates carbon dioxide, a potent greenhouse gas that contributes to global warming and local pollution. At the same time that carbon dioxide concentrations are rising in the atmosphere, fueling higher temperatures, burgeoning population growth of humans and livestock is producing ever-increasing amounts of organic pollution and waste. Now researchers at the Center for Biotechnology at the Biodesign Institute of Arizona State University are working on a way to solve both problems using bacteria to convert organic wastes into a source of electricity.

Bruce Rittmann, Director of the Center for Environmental Biotechnology at the Biodesign Institute, and his team of researchers are developing microbial fuel cells (MFC) that can oxidize organic pollutants and create electricity from pollution.

“We have to tremendously reduce our use of fossil fuels,” said Rittmann at his lab at the Biodesign Institute. “Someday we will run out of fossil fuels and perhaps more importantly, someday the environmental impact these fuels will catch up with us. Global warming is a real threat, but fossil fuel combustion also causes local pollution. We need to stop burning things as much as possible.”

Rittmann says the advantage of the microbial fuel cells is they take renewable organic materials and capture the energy value within them.

“I call it ‘energy within goup’,” explained Rittmann. “There are plenty of organic materials, especially waste materials, around that have energy value. The problem is the energy is in an inconvenient form. There are piles of energy we can’t use. We need to convert it into a form of energy we can deal with, something society can use as a reliable energy source.”

Rittmann says microorganisms can convert organic material into one of three energy sources: methane, hydrogen, or electricity. “Using the microbial fuel cell we can get energy value out of organic stuff and convert it into electricity,” he said.

The microbial fuel cell is powered by bacteria growing as a biofilm on an conductive solid surface serving as an electrode in a bath of organic waste. The microorganisms oxidize the organic pollutants — for example pig manure — “transferring the electrons to the electrode, into an electrical circuit, and eventually to oxygen at the cathoode.” The current of electrons flowing through circuit are electrical energy, explains Rittmann.

“The microbial fuel cell takes advantage of the microbes’ ability to oxidize almost anything that is organic,” he added.

“Most fuel cells are currently limited to using just hydrogen derived from fossil fuel as its energy source. This isn’t solving the full problem since we’re still using fossil fuels to generate the hydrogen,” said Rittmann. “Microbial fuel cell can solve the entire problem, converting organic waste directly into energy. Further, because biological fuel cells operate at room temperature there is no need to waste energy on heating or use expensive catalysts like platinum. Finally since there’s no combustion involved, biological fuel cells produce no pollution — in fact they actually help reduce pollution since organic pollution is their fuel source”

Rittmann says commercialization is still some time away and more research is needed to scale the technology for industrial applications. Nevertheless, he says that have a lot of potential. 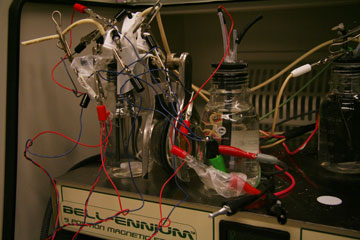 Water is shaping up to be one of the most critical problems facing humanity. With water consumption far outstripping population growth rates due to surging industrial and agricultural demand, the World Bank estimates that 40 percent of the world’s population — more than 2.5 billion people — are enduring some form of water scarcity. Still water experts argue that the problem is not a fundamental lack of water — there is in fact plenty of freshwater to go around — but where it’s located and growing levels of pollution. Even in places where water is not scarce, it is often contaminated or “impaired” with natural containments and fertilizer runoff containing nitrates and perchlorate. While systems exist for dealing with these problems, they typically concentrate compounds and are costly to maintain, especially in poor parts of the world where water is most needed. This may all soon change. Researchers at Arizona State’s Biodesign Institute have devised a way for bacteria to do the dirty work — converting wastewater to clean drinking water using a minimal amount of energy and generating no harmful waste.