Illegal gold mining is accelerating deforestation in one of Venezuela’s most threatened national parks, a new report from Amazon Conservation revealed.

Satellite imagery analyzed by the NGO shows that thousands of excavators, bulldozers and other illegal mining equipment are clearing the rainforest in the southwestern part of Yapacana National Park, located in the Venezuelan state of Amazonas.

The images, taken between 2021 and 2022, recorded over 750 hectares (1,870 acres) of deforestation in one of the most active mining areas of the park. “Seven hundred and fifty hectares in two years in a national park is quite significant,” Matt Finer, senior research specialist at Amazon Conservation and the Director of Monitoring of the Amazon Project (MAAP), told Mongabay.

Previous reports from Amazon Conservation quantified just how much equipment there was in the area — approximately 4,100 camps and 3,800 pieces of machinery — but it wasn’t clear whether they were staying in place or pushing into new parts of the park.

“I thought they were just kind of hunkered down and not really expanding,” Finer said of the mining sites. “It wasn’t until we did this report that I saw they’re actually expanding. The density of mining activity is some of the worst we’ve seen anywhere in the Amazon.” 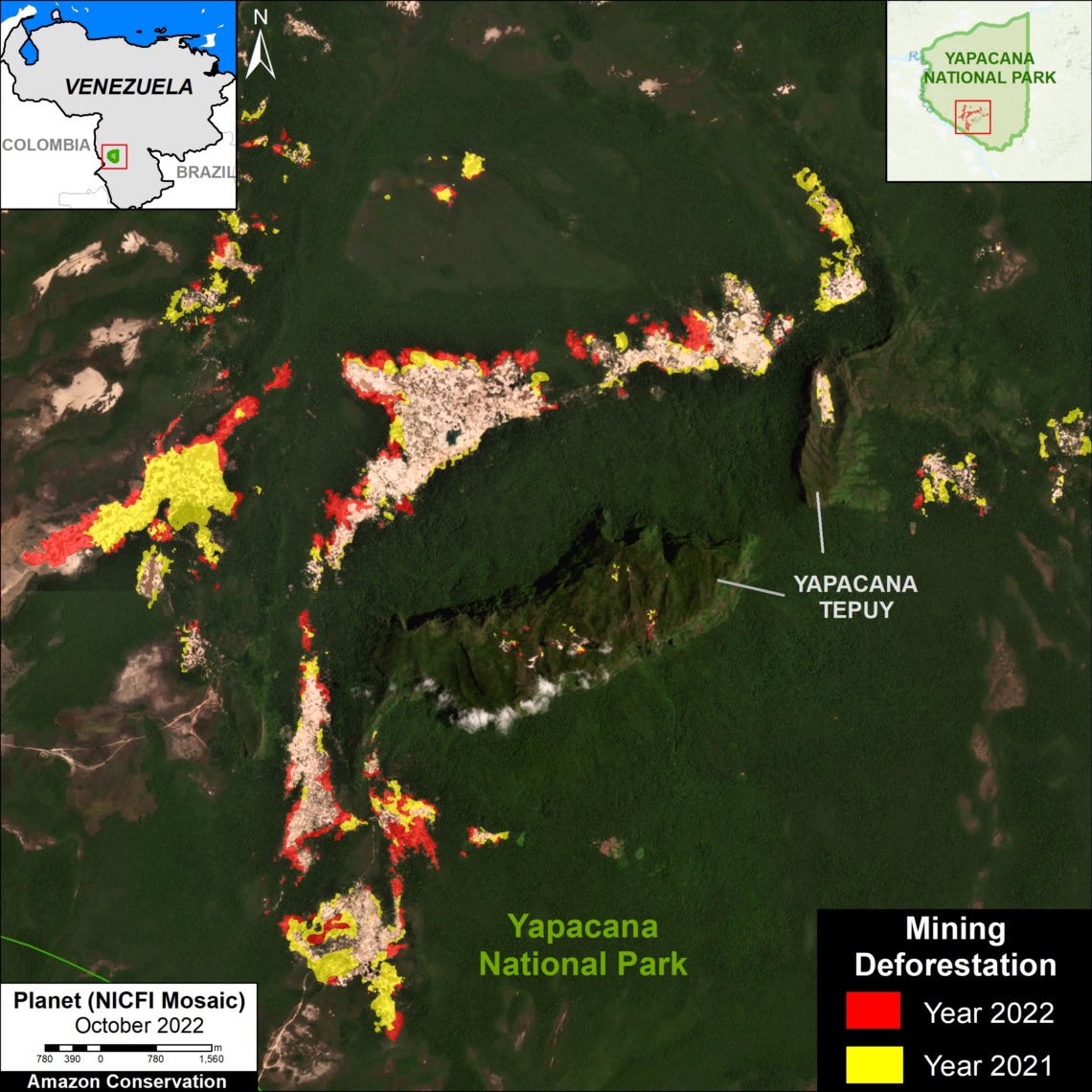 The satellite data comes from Planet. Forest loss alerts come from the University of Maryland and the World Resource Institute’s Global Forest Watch platform. Amazon Conservation’s report is part of its Monitoring of the Amazon Project (MAAP).

The satellite imagery of Yapacana also shows that nearly half of the deforestation in this part of the park occured in the last two years. Seventeen hectares (42 acres) was on top of Tepui, a mountaintop considered sacred by local Indigenous groups.

Last December, the National Bolivarian Armed Forces of Venezuela (FANB) published videos on social media of raids in the area, carried out with the goal of “deactivating and dismantling illegal mining structures, which ignore the country’s laws and violate all kinds of orders and regulations for the conservation of the environment and biodiversity.”

The raid was part of a larger illegal mining campaign called Operation Roraima.

FANB destroyed 27 pumps, 10 generators, six turbines and thousands of meters of hoses, according to strategic operations commander Domingo Hernandez Lopez, who published the results on his Twitter. It also confiscated 4,000 liters of gasoline.

However, some experts studying the area believe the campaign was politically motived.

“This ‘raid’ was more of a publicity stunt to help [President Nicolás] Maduro in his efforts to clean up his reputation and position him now as a defender of the Amazon,” said Cristina Burelli, founder of SOS Orinoco, an advocacy group studying the mining conflict in the Orinoco and Amazonas regions.

The organization said Colombian guerrillas like the National Liberation Army (ELN) and factions of the Revolutionary Armed Forces of Colombia (FARC-D) control the mines in Yapacana in coordination with the armed forces, suggesting that the raid isn’t likely to change the amount of mining — and deforestation — taking place in the area.

“The tragedy is that the armed forces should be protecting the national park, defending and protecting national sovereignty and also providing protection for the most vulnerable, such as Indigenous people,” Burelli said. “But what has become evident is that they have completely abandoned both responsibilities due to their main interest and objective, which is to profit from illegal mining.”