With its towering natural walls, Sumidero Canyon National Park is one of the main tourist attractions in Chiapas state in southern Mexico. Protecting mostly dry tropical forest — one of the most threatened ecosystems in the world — the 22,000-hectare (54,360-acre) reserve is home to more than 1,700 species of fauna and flora, of which 28 are threatened and 34 are endemic to the park.

Sumidero also borders Tuxtla Gutiérrez, the state capital of Chiapas. Home to roughly 600,000 people, the expansion of the city has put increased pressure on the park, driving deforestation in the area.

“Thirty or 40 years ago, when I started working in Chiapas, the idea of most people was that biologists wanted to conserve forests because they were beautiful … because biologists are romantic, right?” said Alejandro Hernandez, Chiapas coordinator for The Nature Conservancy (TNC). “But today we realize that in reality, natural ecosystems are fundamental to human well-being, to human societies and to development.”

TNC has been working with the National Commission for Protected Areas (CONANP), Mexico’s national parks authority, since it was created in 2000, although TNC’s work with national parks in Chiapas goes back to 1986. In the past four years, the two organizations have also started collaborating with local communities and more recently with private companies to plant a million native trees in Sumidero to accelerate the recovery of natural vegetation and help the ecosystem return to health.

Restoration projects like this also have the potential to sequester vast amounts of carbon, fight the climate crisis and promote biodiversity, according to an April 2022 report by the U.N.’s Convention to Combat Desertification (UNCCD). And at the recently concluded COP27 in Egypt, governments announced that $2.67 billion of the $12 billion committed to halt global forest loss and land degradation by 2030 had already been spent to protect and restore forests from 2021-25, with public and private donors having committed a further $4.5 billion in the last year.

Chiapas state has already lost 55% of its original forest cover due to agricultural expansion, timber extraction and forest fires, Hernandez told Mongabay, with a similar dynamic across Mexico, one of the 12 most biodiverse countries in the world.

In 2018, to address rural poverty and environmental degradation, Mexican President Andrés Manuel López Obrador (AMLO) launched the $3.4 billion Sembrando Vida (Sowing Life) reforestation program, claiming it to be the biggest in the world.

The program aims to plant more than a billion trees on a million hectares (2.5 million acres) of land and benefit 420,000 rural farmers, which would help rescue the countryside and reactivate local economies. As of July 2022, the government claims that more than 720 million trees have been planted, while another 548.9 million plants await in community nurseries.

“This is the first government that has given us this kind of support,” Roque Samuel Díaz Aguilar, a Sembrando Vida participant from San Fernando municipality in Chiapas, told Mongabay. “We are surviving from this.”

Díaz Aguilar, like other participants across the country, receives 5,000 Mexican pesos (approximately $250) a month — of which he must save 10% — to work his land as part of agroforestry projects. He used to grow staples like corn and beans on his 2.5 hectares (6.2 acres), but because of the program, Díaz Aguilar now has a wide range of crops including bananas, limes, coffee, guanabana (soursop), pitahaya (dragon fruit) and chicozapote (naseberry) as well as lumber species like cedar.

“We have more food security,” said Díaz Aguilar. “And many people have jobs.”

While the program appears to be creating new opportunities, it has also been awash with criticism. By 2021, it came under fire for encouraging deforestation as farmers were found to be clearing forests because they received funds to plant saplings. In southern Mexico, it is common practice for farmers to clear and burn land for agriculture; in the nearby state of Yucatan research from 2021 showed that Sembrando Vida, combined with low rainfall, caused a 98% increase in state-authorized fires compared with the 2015-18 average.

A reforestation project not focused on the environment

“It’s a program with clear social objectives … to improve the condition of people in the Mexican countryside, to give them a source of income,” said Javier Warman, forests director for World Resources Institute (WRI) Mexico. “It’s not a program focused on restoration or reforestation.”

In September 2022, the National Council for the Evaluation of Social Development Policy (CONEVAL) — a Mexican government agency responsible for measuring social policy and poverty reduction —released an evaluation of Sembrando Vida. The 318-page report found problems ranging from plants unsuitable for the climate of recipient regions and bottlenecks in receiving financial support.

Sembrando Vida is being implemented by the secretariat of social development, not by an environmental agency, which also highlights its social focus. Furthermore, to obtain funds for these social programs, AMLO has been criticized for slashing 75% of the funding to CONANP. This also resulted in laying off more than 200 staff members out of a total 645, severely limiting CONANP’s ability to meaningfully protect the country’s 182 federal Protected Natural Areas (ANPs), totaling almost 91 million hectares (225 million acres).

“My impression is that it has never been possible to convince the political class that there will also be economic benefits from the restoration, because they want something immediate,” said Bonfil  Sanders, who is also part of the group of academics making up the Mexican Network for Environmental Restoration.

She explained that generally, restoration takes between five and 30 years to show results, which discourages politicians from investing in recovering landscapes that continue to degrade.

“First there should be more resources for the environment, with more seriousness, more commitment and also more intimate partnerships between the government and NGOs … as well as academics,” said Bonfil Sanders.

“The only thing that we continue to do, each one of us with the little money that we have, is research … so that if someday there will be real money, there is already knowledge.”

To drive Mexico’s reforestation agenda in line with international standards, in April 2021, the Mexican Alliance for Ecosystem Restoration was launched. Part of the U.N. Decade on Ecosystem Restoration, the alliance is coordinated by WWF Mexico, WRI Mexico and NGO Reforestamos (We Reforest) Mexico and seeks to guide private and public sector restoration initiatives and drive investment in ecosystems, aiming to restore 1 million hectares of forest by 2030.

TNC, which is also part of the alliance, apart from its restoration work in Sumidero, is also promoting the restoration and reforestation of 1.4 million hectares (3.5 million acres) in Chiapas state as well as regenerative agriculture initiatives that aim to incorporate 2.5 million hectares (6.2 million acres) of land into sustainable management schemes.

Lucía Ruiz Bustos, biodiversity and finance coordinator for WWF Mexico, told Mongabay that since 2016, Mexico is seen as one of the countries with the highest deforestation and land conversion rates in the world, with 50% of its land already degraded. She said that while it will always be cheaper to conserve than to restore, Mexico has huge opportunities for restoration to protect biodiversity and bolster ecosystems, while also creating jobs and supporting the economy.

“Restoration, conservation, and nature-related issues are usually seen as being linked to philanthropy,” said Ruiz. “What we believe is that today you can generate markets and businesses around restoration.”

She said that while the private sector currently has little involvement in restoration, in the coming months, WWF Mexico will start developing a financial mechanism and methodology to value the impact of restoration actions for ecosystem services, which can also be quantified to generate diversified income for local communities. Estimates from the UNCCD suggest that every dollar invested in restoring degraded lands can bring between $7-$30 in economic returns.

Bonfil Sanders told Mongabay that to date the private sector has not only had a limited role in restoration initiatives in Mexico but has also been accused of greenwashing. In the case of Coca-Cola, which was supposedly implementing a huge reforestation program in Mexico, Sanders sent some of her students to check the results.

“Nobody knew anything about it in the village. That is, there was nothing, but they [Coca-Cola] took some children to the side of the road to a small plot of land, put some Indigenous people there, and I think they gave them some money and some food. They made a video and showed it on TV, but they didn’t do anything.”

In Sumidero National Park, Procter and Gamble (P&G) will be paying for 10% of the million trees to be planted to help to scale up the rate of natural reforestation in the reserve. Leonardo Salazar, P&G’s respiratory, sleep and pregnancy brand director in Mexico, told Mongabay that they were working with a recognized organization like TNC to get involved in multiyear partnerships, which go beyond just a one-day event.

“I think as corporates we’re learning how to do that,” said Salazar.

Apart from the possible economic returns, the UNCCD is also recognizing the important role that private companies can play by joining collaborative initiatives with government, NGOs and communities to establish partnerships that pool resources, aggregate project activities and share costs. 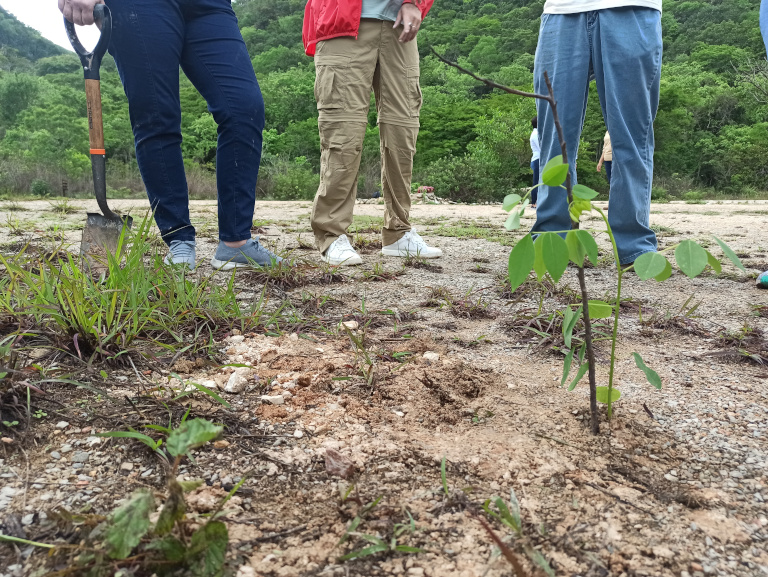 Collaborative restoration initiatives between public and private sectors, as well as NGOs and academics, have the potential to protect biodiversity, bolster ecosystems, and create jobs. Image by Dimitri Selibas.Yet, internationally, along with Coca-Cola, Unilever, IKEA and Tesco, P&G was called out in a June 2022 report by the NGO Changing Markets Foundation for greenwashing tactics used to mislead consumers. Additionally, in 2020, 67% of P&G shareholders voted that the company needed to report its plans to remove deforestation from its supply chains after several environmental and civil society groups accused it of driving the deforestation of Canadian boreal and Southeast Asian tropical forests.

In October 2022, shareholders voted to remove P&G’s CEO and chairman, as well as two other board directors, for not taking enough action against deforestation-related risks in the company’s supply chain. The initiative was unsuccessful. These forms of corporate responsibility offer some hope for controlling greenwashing, but much more needs to be done to help companies see restoration as an investment rather than a cost.

“We have to show that ultimately this issue of climate change is going to affect all of us … that the challenge humanity faces today is the greatest challenge humanity has faced in its entire history,” said Hernandez. “The truth is that in reality economic development is not feasible if you don’t conserve the natural resource base.”

Changing Markets Foundation. (2022). Under wraps? What Europe’s supermarkets aren’t telling us about plastic. Retrieved from https://changingmarkets.org/wp-content/uploads/2022/05/Under-wraps_FULL-REPORT_FINAL.pdf

Banner image: Cypresses (like Cupressus lindleyi) can take up to nine months before being planted out; its dense wood makes it grow slowly, which makes it popular for use in construction and carpentry. Image by Dimitri Selibas.