PHNOM PENH — On the edges of Boeung Tamok, Phnom Penh’s largest lake, 25-year-old Kong Khun sheltered from the late June heat in a bamboo hut. Despite clear skies, Khun wasn’t out on the water fishing with his family. There is little point, he said.

An almost endless convoy of trucks carrying sand, rocks and soil paraded around what remains of the lake as part of a land reclamation project that Khun said has decimated the fish population and his income.

“The lakes around this city are almost gone,” Khun said. “This is the last great lake of Phnom Penh, and when it goes, the city will be flooded up to the waist and poor people will have to work in construction or factories, that’s all that’ll be left.”

Long a source of fish and aquaculture, along with providing natural flood defenses and wastewater treatment, lakes across Cambodia’s capital are being filled in by powerful tycoons and government agencies.

Khun is one of the few people still remaining in Boeung Tamok, where the government has been evicting the roughly 300 families living off the lake to make way for commercial developments.

These families have relied on the lake for fish and aquaculture farming for generations, but urban land rights NGO Sahmakum Teang Tnaut (STT) warned in April 2021 that as many as 25 of those families were at high risk of eviction now, while a further 204 were at risk of future eviction.

The lake spanned more than 3,239 hectares (8,004 acres) when it was officially demarcated in 2016. But in the past four years its area has been revised at least 55 times, with more than 2,136 hectares (5,278 acres) of its surface already sold to private owners or gifted to more than 12 government institutions, according to STT.

In June and July, hundreds of Boeung Tamok families delivered petitions to government institutions in a bid to save their homes. Sixteen protesters, mostly women, were subsequently summoned to the Phnom Penh Municipal Court on charges of incitement. Seven of the 16 accepted their invitation to court and hearings were held in August, but court officials refused to detail the outcomes when contacted in September.

Vitit Muntarbhorn, the U.N. special rapporteur on the situation of human rights in Cambodia, suggested in recent comments that protesters’ fight for their homes around the lake had not gone unnoticed.

“I also saw firsthand the plight of communities displaced by the competition for land,” Muntarbhorn said in August following his most recent visit to Cambodia. “Especially related with privatization and landfills to turn a lake in the Phnom Penh area into commercial land, and the traumas caused by displacement and the added dangers of flooding caused by unbalanced development.”

‘They are planning to wipe us out’

In the south of Phnom Penh, a similar fear has taken hold among residents living around Boeung Tompoun and the adjoining Cheung Ek wetlands, which look set to share Boeung Tamok’s fate.

Of the estimated 1,000 households that lived around the Boeung Tompoun in July 2020, scarcely a handful remain as the infilling of the lake has accelerated through 2021 and 2022, leaving little water left as private security ward onlookers away from the dozens of excavators drying up the lake and its adjoining wetlands.

As the wind whips sand across what was once lake, Diet Savon was finishing up her morning work: collecting vegetables from one of the last patches of wetland in Boeung Tompoun that can support aquaculture crops.

Each day, at 1 a.m., she begins collecting morning glory, among other crops, to sell at market. Savon said she used to have her own farm in the wetlands, but it’s been filled in with sand, so now she works someone else’s farm instead for the equivalent of $5 per day.

Savon, 60, said nobody in her area has moved yet, as they are waiting to see whether compensation will be offered, but they’ve received little information on whether the lake will be fully filled in, and if so, when.

“If it is [filled in completely] then I will move back to my village in Prey Veng province to look for work, but I don’t know what I’ll do to survive,” she said.

While Boeung Tamok falls into the hands of private developers and government institutions, Boeung Tompoun and Cheung Ek are set to be transformed into luxury condos, a new shopping mall and other commercial outlets that lakeside residents say they see no benefit from.

The reclamation of land via infilling lakes has coincided with rising land and real estate prices in rapidly urbanizing Phnom Penh. But for those who have called these lakes home for generations, the chances of being able to continue living in the capital dwindle with every truckload of sand dumped into the water.

The prospect of being priced out of Phnom Penh by the land-hungry construction sector is mirrored in the city’s past and future, with the fate of long-lost Boeung Kak lake presenting a grim reflection of things to come for current lakeside residents, and the construction of a new artificial island project on the Mekong River suggesting that the Cambodian government is doing little to change course.

In June, one resident who had been holding out in Boeung Tompoun and requested not to be named complained of the wind whipping sand across his fish farm, which he had already had to relocate repeatedly to keep up with the rapidly changing boundaries of the lake. Many fish died in transport, and the man predicted he only had a few months left before another move became necessary.

“These days, we are not allowed to grow any vegetables. They are planning to wipe us out,” he said of the local authorities, who he added had grown more insistent that he leave.

By early September, the man confirmed he had left the lake after he was forced to dismantle what remained of his fish farm.

The main builder in Boeung Tompoun and Cheung Ek is Ing Bun Hoaw, a senator with the ruling Cambodian People’s Party (CPP) who boasts a business portfolio spanning construction, real estate and insurance, to name but a few. The senator’s eponymous Ing City development project has, according to its website, acquired 2,572 hectares (6,356 acres) of land, most of which overlaps with Boeung Tompoun and the Cheung Ek wetlands.

Two of Prime Minister Hun Sen’s daughters, Hun Mana and Hun Mala, also have a vested interest in the infilling of Phnom Penh’s second-largest lake through their shared venture of luxury condo company Orkide Villa. Other developers include Japanese-owned Aeon, which is building its third shopping mall in the city.

These developments have created a huge demand for sand — more than 77 million cubic meters (2.7 billion cubic feet), NGOs say — much of which is being mined in the Mekong and Bassac rivers upstream.

The companies willing to provide such a volume of sand for this purpose include Global Green Energy Development, which has been linked to the family of logging tycoon Try Pheap, and Hero King, a company run by Kim Heang, wife of sand magnate Ly Yong Phat, along with five people believed to be their children.

Like Try Pheap, the economic success of Ly Yong Phat’s vast business portfolio has been overshadowed by high-profile land grabs and destructive industrial scale agriculture businesses that have left their mark all across the country.

Transporting the sand from the rivers to the lakes creates yet more problems, as experienced by Om Vi,  55, who lives on a wooden houseboat moored under the shadow of tycoon Sok Kong’s 18-story Sokha Hotel, which towers over the confluence of the Mekong and Tonle Sap rivers in Phnom Penh.

Having fished for 11 years in Chroy Changvar district, Vi remembers when seeing just a few sand barges on the rivers was a spectacle. Now, he says, he can see 10-20 boats passing by at any time of day.

These vessels have repeatedly torn through Vi’s fishing nets, but when he asks for compensation, he’s met with a mix of responses.

“Sometimes they’ve paid me, other times I’ve had guns pointed at me, so now I just try to avoid them,” he said, but added that he could not identify the companies that the boats belonged to.

Multiple attempts to reach Global Green and Hero King for comment using phone numbers listed by the Ministry of Commerce were unsuccessful, and neither company responded to questions sent by email.

Up north, activists, researchers and community members around Boeung Tamok have previously reported the use of sand and soil composites delivered daily by dump truck to the lake for infilling.

Even before Boeung Tamok is smothered with sand, Cambodia’s elite have rushed at the chance to grab a slice of what is planned to become prime real estate in the north of Phnom Penh. Government subdecrees have revealed that among them are Ly Yong Phat’s wife, Kim Heang, who personally received 30 hectares (74 acres) of Boeung Tamok in 2020 even as her company fills in the lake now. Heang could also not be reached for comment.

Over the course of 2022, nearly 105 hectares (259 acres) of Boeung Tamok were gifted out to 11 private individuals and the Phnom Penh municipal administration, which received roughly 28 hectares (69 acres). This represents a marked contrast to the breakneck pace at which the lake was divvied up in 2020 and 2021, which respectively saw around 665 and 1,263 hectares (1,643 and 3,121 acres) signed over from the state to new owners.

Many of those buying up reclaimed land from both Boeung Tamok and Boeung Tompoun have the resources to withstand the environmental cost that their newly acquired land has come at. But for the majority of Phnom Penh’s residents, the flood risks have always been very real and hugely damaging.

“There’s a significant risk that much of Phnom Penh would be inundated in the event of a large-scale flooding event,” said Harri Hudson, a geography Ph.D. candidate at Royal Holloway, University of London, who is currently studying Phnom Penh’s flood risks. “The entire city used to be wetlands and if you build on wetlands, there’s a risk that it will sink under its own weight.” 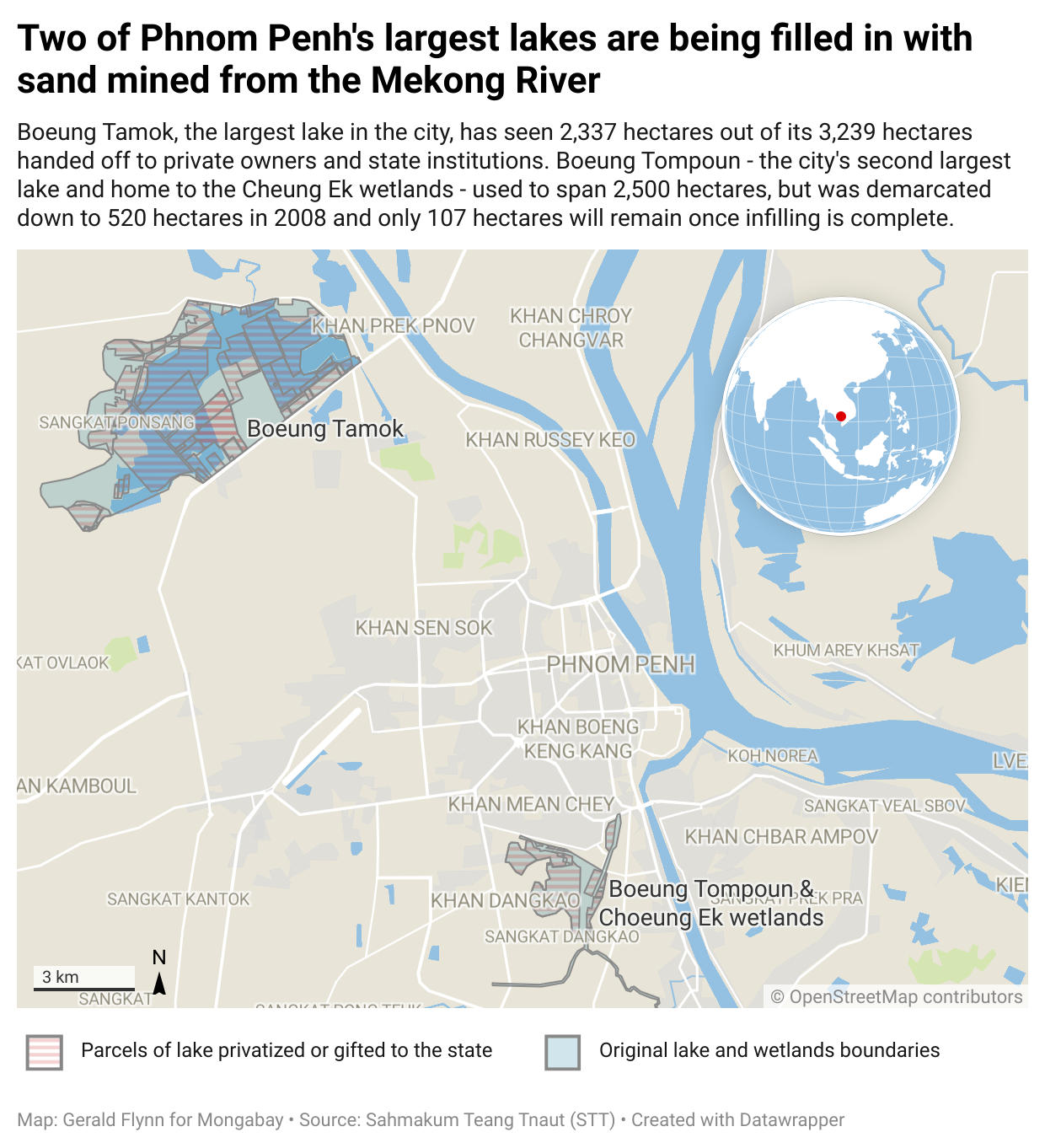 Phnom Penh’s construction boom has seen a startling increase in urban areas, which jumped from 3,000 hectares (7,400 acres) in 1973 to just 4,000 hectares (9,900 acres) by 1990 and then leapt to 25,000 hectares (62,000 acres) in 2015. Boeung Tamok and Boeung Tompoun both served as key rainwater catchment areas — natural flood defenses — but the path of development chosen for the city by its richest is leaving thousands at risk.

Neither Khoung Sreng, governor of Phnom Penh, nor City Hall spokesperson Met Measpheakdey responded to questions regarding the capital’s flood risks or whether the loss of lakes would exacerbate this risk.

While Phnom Penh flooded before its lakes were infilled, Hudson noted that inundations have always hit low-income communities the hardest.

“When it floods, garbage and raw sewage is flushed back into these communities by canals. I’ve heard about children falling off the little wooden bridges built between flooded homes and drowning,” Hudson said. “Even the acidity of the water, this damages people’s electrical appliances that they have to replace.”

Back at the edges of Boeung Tamok, the fisherman Khun said he’s more than aware of the havoc that filling Phnom Penh’s lakes could unleash, both from an environmental perspective and in terms of livelihoods.

“I don’t know what these big people think,” he said. “But this lake stores rainwater and protects against floods in the city, it can feed hundreds of families and allow thousands to make a living, but they want to take all of this away.”

Photos supplied by the University of Southampton and Andy Ball as part of an ongoing collaboration to document the impacts of sand mining on the Mekong’s communities. The images are not to be republished without prior permission.