by Elizabeth Claire Alberts on 2 September 2022

On April 10, 2019, a fishing vessel known as Da Wang left Taiwan to sail out into distant waters in search of tuna. Two months into the voyage, a disturbance occurred: the first mate reportedly beat one of the crew members so badly that he died from his injuries. The following year, another crew member was injured while working on the same vessel — but according to reports, his superiors forced him to continue working, and he eventually suffered a stroke.

Yet tuna sourced from this very vessel continues to be packaged and sold for the Bumble Bee Seafood Company and sold in grocery stores in the U.S., according to a new report.

The report, published Sept. 1 by Greenpeace East Asia, suggests that Bumble Bee Seafood and its parent company, Taiwan-based Fong Chun Formosa Fishery Company (or FCF) — one of the top tuna traders in the world — are sourcing seafood from vessels involved not only in human rights abuses, but also in illegal, unreported and unregulated (IUU) fishing practices. This is despite both companies having corporate social responsibility and sustainability policies in place.

The authors found that 13 vessels supplying seafood to Bumble Bee violated Taiwanese fishery regulations, and were even on the Taiwan Fisheries Agency’s (TFA) list of vessels involved in IUU fishing. Moreover, they identified issues of forced labor and human trafficking on six Taiwanese vessels that supply seafood to Bumble Bee and FCF after conducting interviews with crew members.

Greenpeace investigators gathered information from hundreds of cans of tuna being sold in U.S. supermarkets, using Bumble Bee’s publicly available “Trace My Catch” tool, which allows consumers to enter their product code and see where the seafood was sourced from. But when they cross-checked this information with other information sources, including fishing vessels’ automatic identification system (AIS) data from Global Fishing Watch, the investigators found that much of the information provided was incomplete or incorrect. In many cases, the vessels weren’t fishing in areas where they were meant to be fishing.

“The traceability tool ‘Trace My Catch’ is supposed to provide consumers more information about their products, but there’s incorrect and insufficient information,” Yuton Lee, an oceans campaigner at Greenpeace East Asia’s office in Taipei, told Mongabay. “We believe that they have the responsibility — the social responsibility — to be more open and transparent.”

This isn’t the first time that Greenpeace East Asia has shone a light on human rights abuses on vessels supplying tuna to Bumblebee. After FCF’s acquisition of Bumble Bee in 2020, the NGO reported that fishing vessels supplying FCF were suspected to be involved in forced labor and shark finning.

In response to the newly published report, Amanda Frew of the PR company FleishmanHillard, representing Bumble Bee and FCF, said the group “continues to work within its supply chain, with others in the industry and the Seafood Task Force to reduce IUU fishing across the globe and to make ongoing progress toward the responsible recruitment and treatment of all workers.”

“While we believe the Greenpeace East Asia report contains several inaccuracies, we also believe that more progress can be made in ensuring responsible labor practices are followed on tuna vessels,” Frew told Mongabay in an email. “Globally, the fishing industry provides for the livelihood of an estimated 40 million people and industry-wide challenges can only be addressed through collaboration and a shared commitment to action and improvement with NGOs and governments worldwide. We are carefully reviewing allegations raised in regard to our supply chain.”

Lee said Greenpeace had reached out to both FCF and Bumble Bee prior to the publication of its report, but that neither company responded at the time. However, she said that they will be reaching out again to ask for a meeting.

Greenpeace East Asia is calling for FCF and Bumble Bee to urgently address the sustainability and human rights abuse issues it uncovered in the making of the report, and to remove products from grocery store shelves that are linked with vessels that made such transgressions. It’s also asking for an independent investigation committee to look into the traceability issues of the “Trace My Catch” website.

“We think that at this moment, immediately, they should remove [such products], and then have their investigation,” Lee said. “And if [the tuna is] free from forced labor or IUU, then they can sell it. But if not, it shouldn’t be reached by the consumers at all.”

Banner image: Greenpeace called for FCF to commit to reform sustainable policy of fisheries during an action in 2020. Image © Greenpeace. 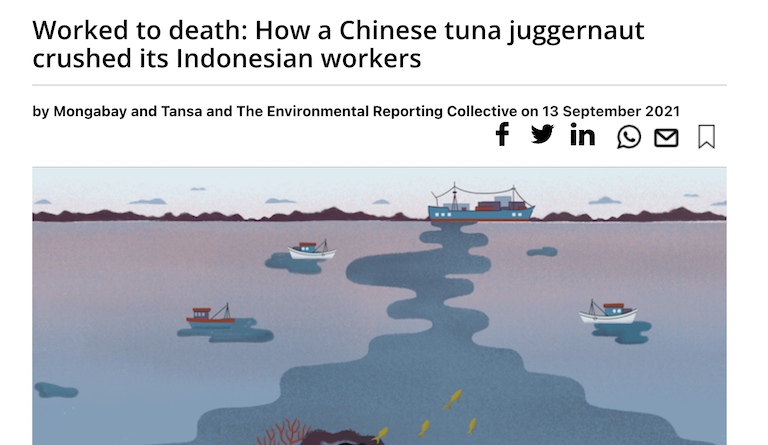