In Nepal, doubling down on tiger conservation looks to pay off

CHITWAN NATIONAL PARK, Nepal — The rhino sniffs the morning air and grunts. Our wooden canoe slowly passes the grove where the 2-ton prehistoric animal is grazing. Here, in Chitwan, in southern Nepal, about 600 greater one-horned rhinos (Rhinoceros unicornis) roam the forests and wetlands.

Strong protections have allowed the rhino population to grow. They’ve also benefited another, much more elusive, mammal in Chitwan.

We leave the canoe and go ashore with local guide Hem Subedi. He points to the muddy riverbank: fresh pawprints. One of Chitwan’s approximately 100 Bengal tigers (Panthera tigris tigris) has recently passed through.

There were only a handful of the big cats in the 750 square kilometers (290 square miles) that constituted Chitwan National Park when it was founded in 1973. Since then, Chitwan has grown to 932 km2 (360 mi2), and its tiger population has increased with it.

In 2010, Nepal and the 12 other countries with wild tiger populations came up with an ambitious plan: Double the population of tigers in the wild by 2022, the next Year of the Tiger in the Chinese zodiac. In the decade since then, however, Nepal is the only country that has even come close to achieving that goal. From 121 tigers in 2010, there are now about 240 in Nepal’s various national parks and adjacent protected areas, with the government aiming for 250 by 2022.

“Nepal is a leading country which other countries, like India, want to replicate,” Ram Aryal, from the environmental NGO the National Trust for Nature Conservation (NTNC), says at his office on the outskirts of Chitwan.

Tiger conservation here involves people at various levels, from government officials to local farmers. Communities living in and around tiger habitats benefit from the revenue that tiger-seeking tourists bring, with the money filtering down to schools and farmers.

“To only impose laws will not be enough. Now people actually feel that this is my tiger, my rhino, that we need to protect [the wildlife],” Aryal says.

His organization has for the past three decades worked on conservation in the Terai Arc, a vast swath of lowland terrain that sweeps across Nepal and India, and which includes Chitwan. In the national park, the NTNC has worked on various sustainability projects that bring together thousands of local community members.

To sustain a healthy population of wild tigers, two key factors are space and prey. Aryal estimates Nepal could hold up to 700 tigers if the buffer zones adjacent to the national parks are expanded, and more wildlife corridors between protected areas are created. Best case, the tiger population could double in just five years, he says.

The recent history of tigers is a bleak one. A century ago there were about 100,000 wild tigers spread across Asia’s various landscapes. By the early 2000s, that number had plummeted by 95%, due largely to poaching and loss of habitat. What used to be nine subspecies have been whittled down to six, with the Javan, Bali and Caspian tigers going extinct. Vietnam, Laos and Cambodia lost their tigers, and the big cats are now restricted to just 13 countries: Nepal, India, Bangladesh, Bhutan, China, Indonesia, Myanmar, Malaysia, Thailand and Russia.

By 2010, when the range countries decided to double the population, there were an estimated 3,200 tigers left in the wild. Today that number is about 4,000, but this is dwarfed by the estimated 5,000 to 10,000 tigers held in captivity in the U.S. alone, and the unknown number kept on Chinese tiger farms. Those latter populations suggest tigers as a species aren’t going extinct any time soon. So why the urgency to double the wild population?

“As an umbrella species the tiger represents a living environment, and protecting it we also protect all other species living in that environment,” Aryal says.

Poaching on the decrease

A key factor in Nepal’s success is something that other range countries are missing: strong enforcement against poaching. Nepal’s zero-poaching approach means no tigers have been shot in a decade. The knock-on effect has been a reduction in poaching of elephants and rhinos — but only within its borders. Nepal’s geographical position, wedged between India and China, makes it an important transit country for the smuggling of animal products.

Conservation efforts have therefore also involved the military, with heavily armed soldiers patrolling parks like Chitwan. They use drones and surveillance cameras, along with sniffer dogs, elephants, jeeps, motorbikes, boats and bicycles. Nepalese law prohibits all hunting, apart from trophy hunting of a few species. Poaching, even of common species such as wild boar and deer, can result in long prison sentences; killing a tiger carries a life sentence. These militarized tactics have also led to allegations of human rights abuses by park guards against Indigenous communities including the use of torture and the destruction of homes.

An individual tiger requires territory of about 50 km2 (19 mi2) and prey density of 150 animals/km2 (about 390 animals/mi2). The problem is that there’s currently not enough of either to support a growing tiger population. The big cats are extremely territorial, and there have been several recent incidents in Chitwan where tigers have killed each other in fights over the limited space. Nepal’s protected areas already cover about a quarter of the country’s total area, among the highest rates in Asia, and the government is considering expanding the buffer zones that ring the national parks.

A feasible solution, conservationists say, would therefore be to expand the tiger zones into these areas and include local communities already living there.

The Baghmara community forest is part of the buffer zone next to Chitwan National Park. It’s home to 5,600 people who rely on the forest for firewood and other resources. Tigers and other wildlife used to roam the area, but in the 1990s trees were planted here, making it less suitable as tiger habitat. Today, tourists come here to spot the park’s tigers and rhinos while riding on the backs of elephants or paddling in canoes. They brought in about $500,000 in revenue annually before the COVID-19 pandemic hit. One-third of that revenue goes to the community, including for maintaining roads and building schools, where students are taught the importance of conserving tigers.

Around Chitwan, electric fences and concrete walls have been erected to reduce conflicts between humans and wildlife. Farmers are compensated for crops ruined by rhinos and elephants, or livestock killed by tigers and leopards.

Kul Tamang is one of many rangers patrolling the forest in Baghmara. Armed with just a wooden cane, he follows a narrow path that winds through the forest. He’s been doing this for the past 15 years, and says he knows every rock and tree — something he evidently takes great pride in.

“Everyone here respects the tiger. It’s the jewel of the forest — symbolizing power,” he says. “The tigers also give us work since they attract tourists.” 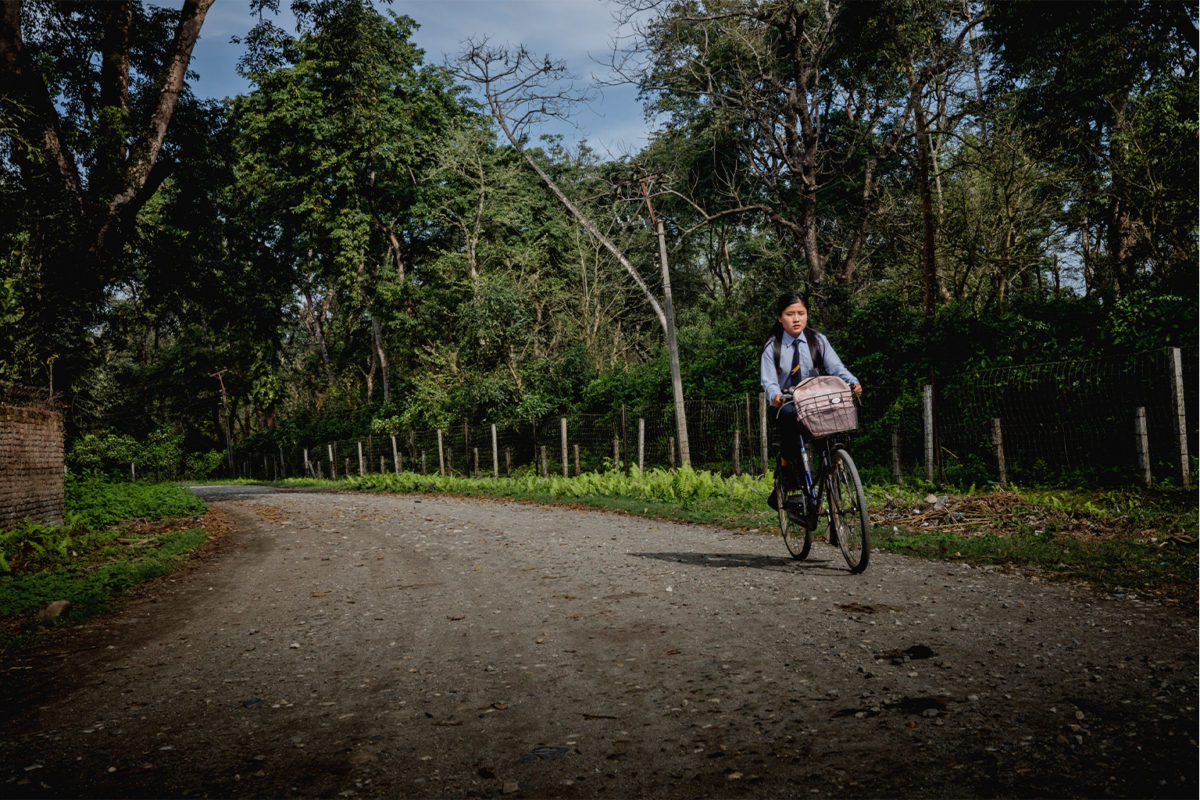 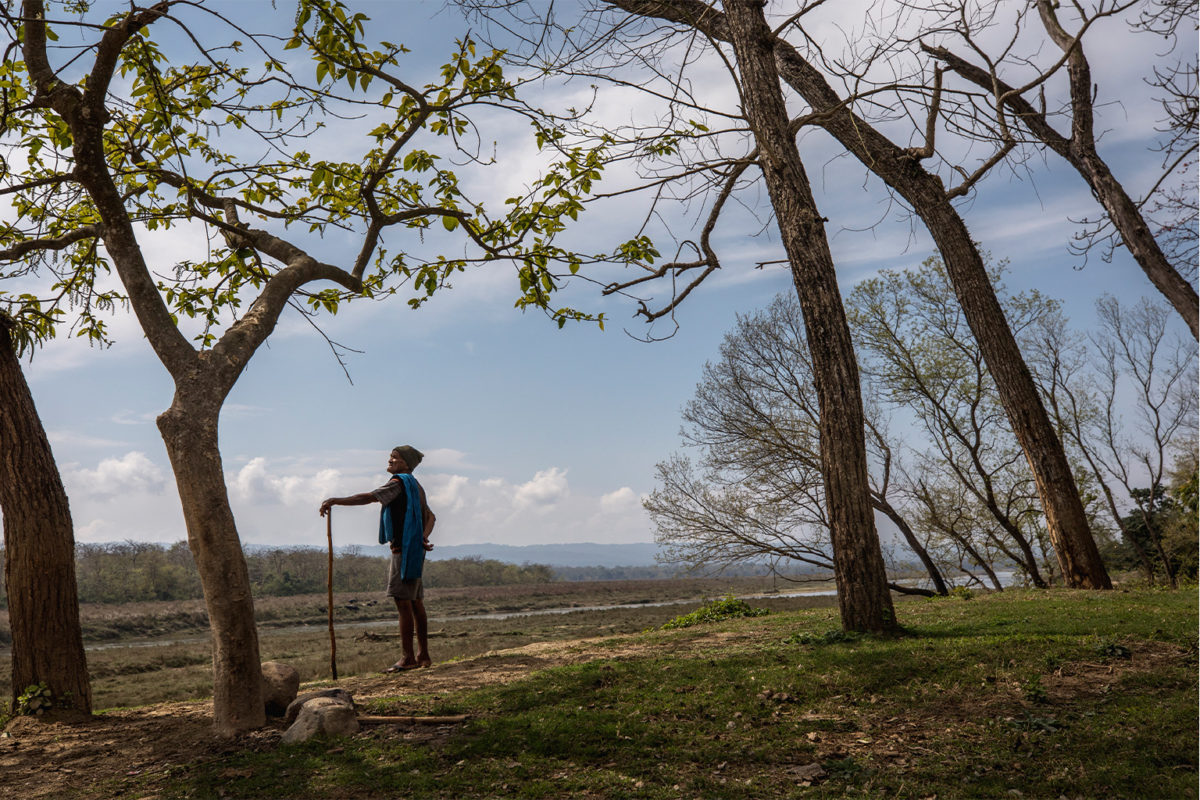 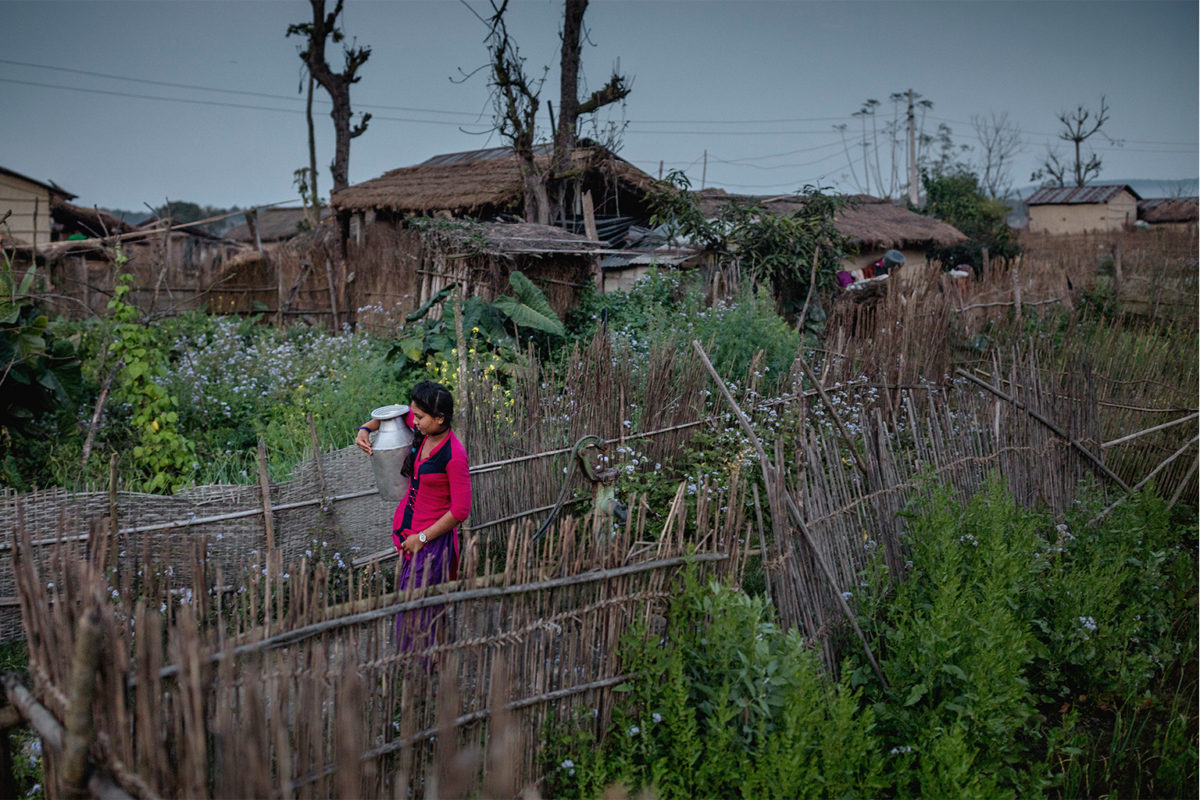 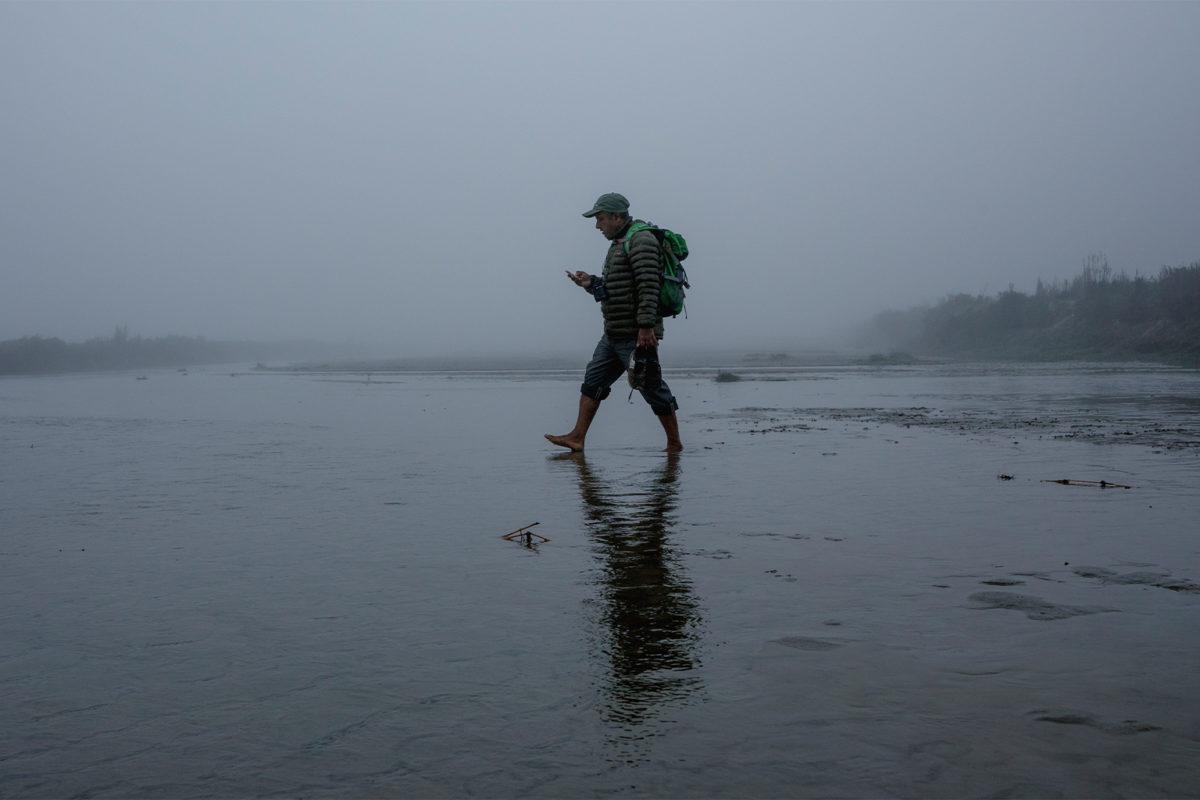 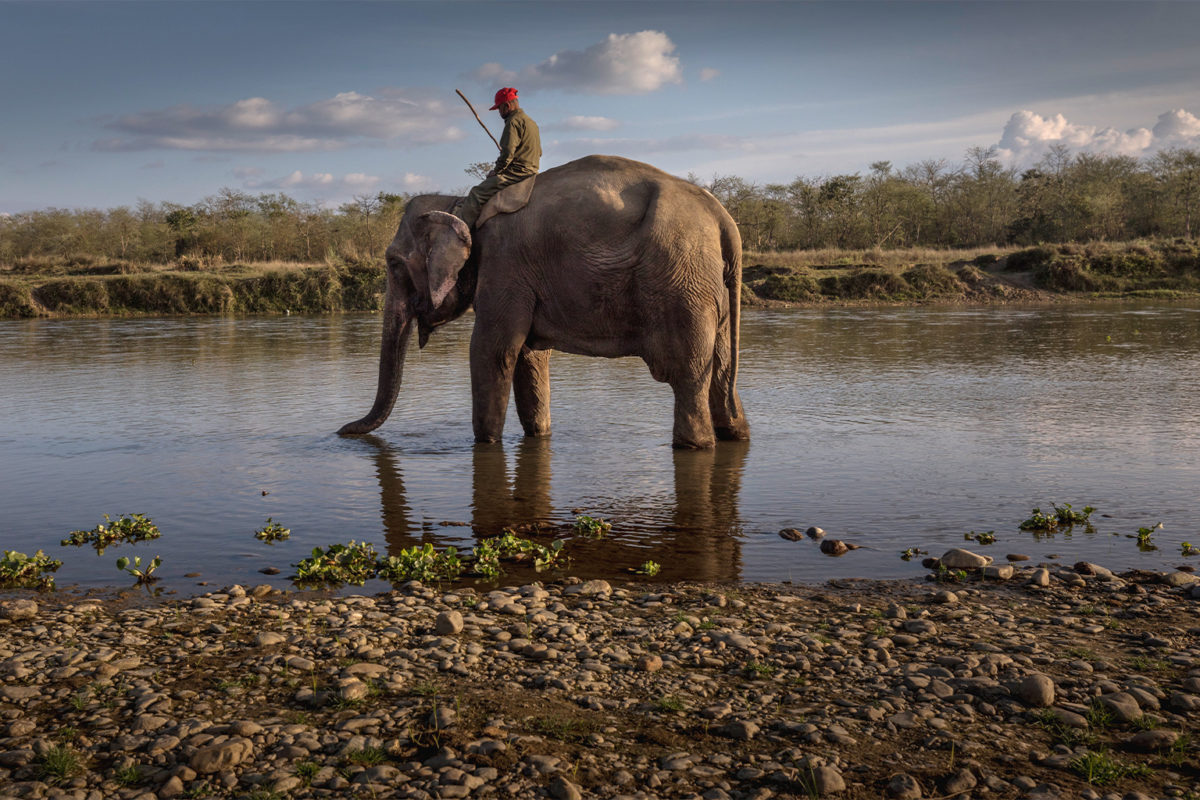 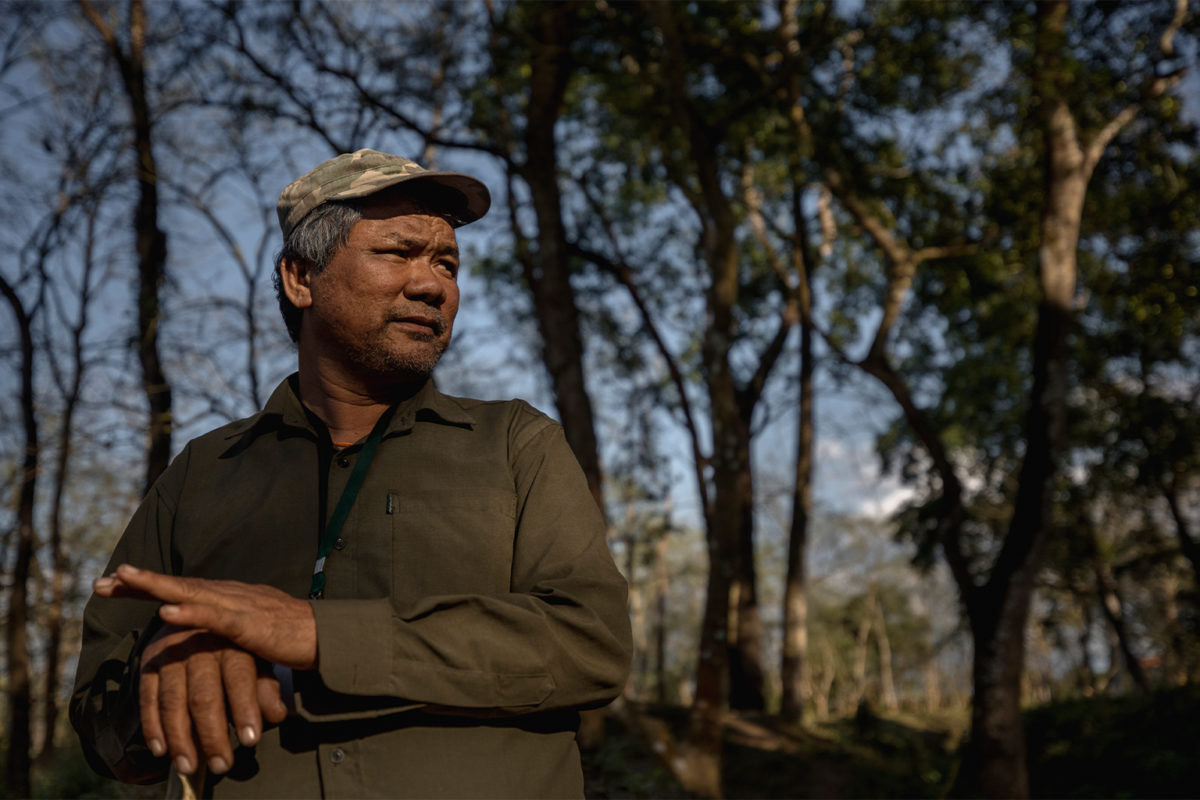 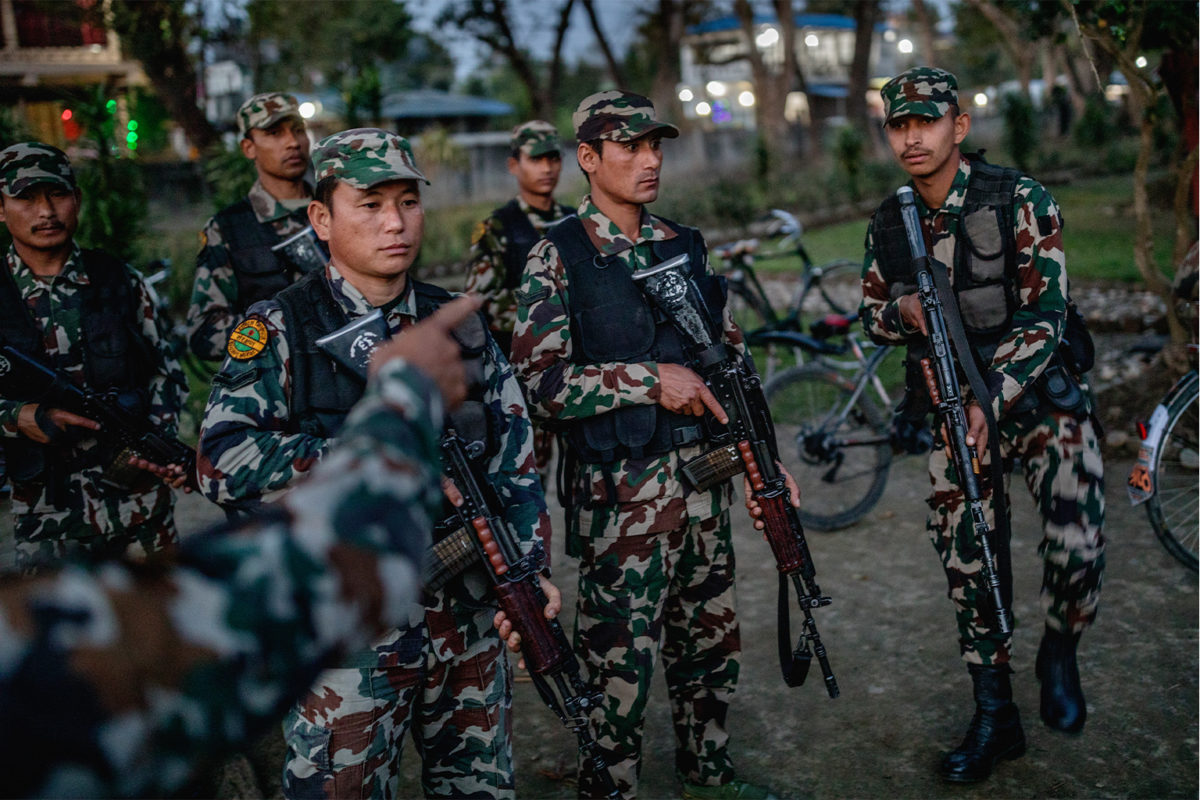 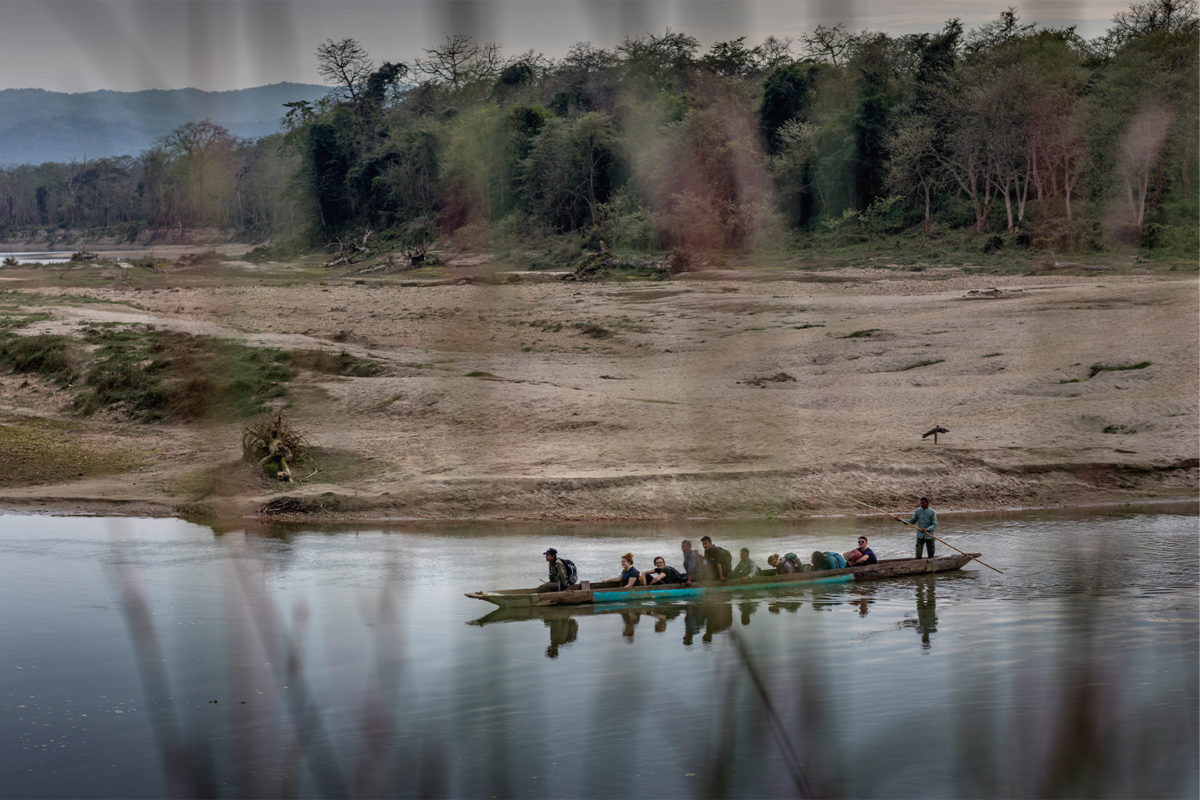 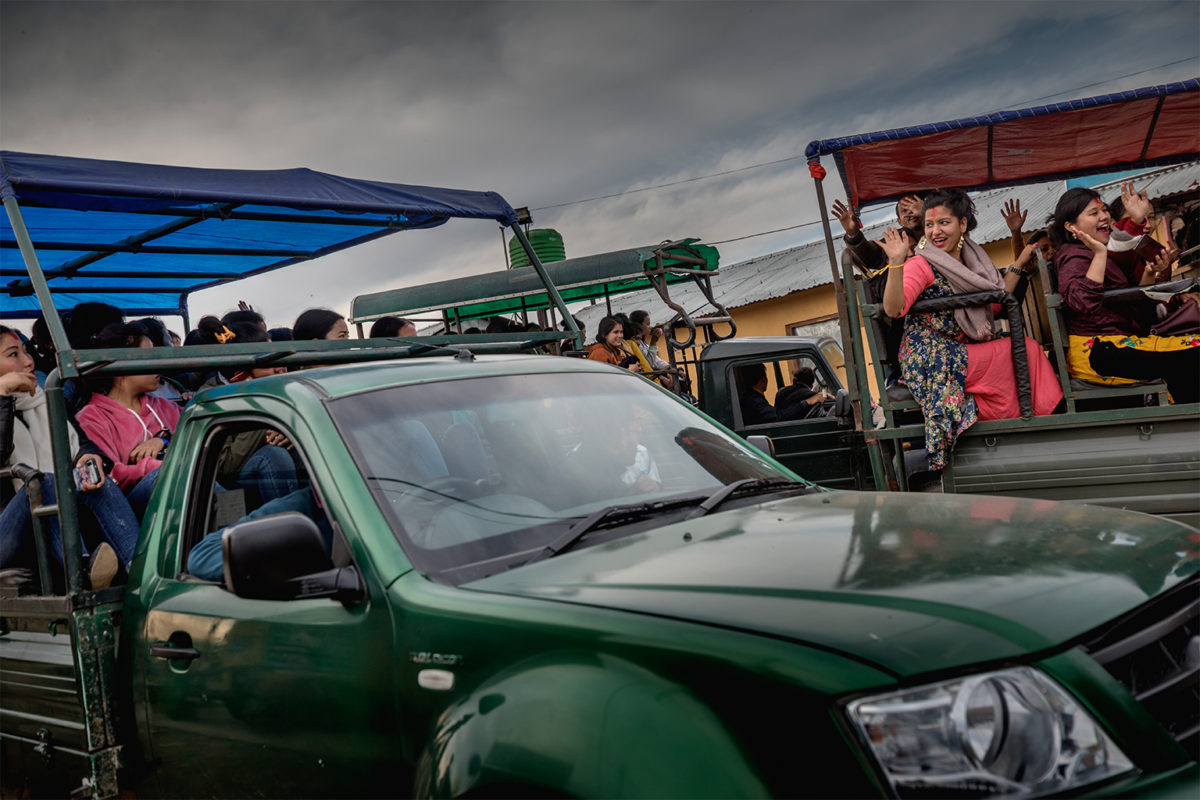 For many in the community, positive perceptions of the tigers are a matter of economics: the 180,000 visitors to the park annually (or at least before the pandemic) come to see live tigers, not dead ones. And while many locals have lost water buffaloes, cows, goats — even family members when they stray into the park to cut grass or collect firewood — to the tigers and leopards and rhinos, there’s a growing acceptance of the wildlife on their doorstep.

Mani Raut lives near Sauraha, the eastern gateway for tourists entering Chitwan. In 2019, a tiger killed her water buffalo, which was worth about $1,000. Since the buffalo was inside the park when it was attacked, Mani wasn’t eligible for compensation under the community payout scheme. Still, she says she understands the importance of the park to the community’s development.

“The tourism creates opportunities for us,” she says. “Both my son and daughter want to work as tourist guides in the park.”

The Living with Tigers program, supported by the Darwin Initiative, a U.K. government grants scheme, started in 2015 to raise awareness among local communities in Chitwan and Royal Bardia National Park, in western Nepal. The program includes livestock management, with predator-safe corals built of wire and rope. It also involves generating biogas from cow and buffalo dung, thereby reducing the need for locals to venture into the park to collect firewood. The program covers 1,200 households and 5,000 people, and campaigns through social media and local radio. Social surveys conducted as part of the program show that local attitudes toward the tigers are changing.

“The attitude is usually more positive and people are ready to change their behaviors,” says Prakash Chapagain, field coordinator of Living with Tigers.

He adds the tiger population in places like Chitwan can grow substantially if the right measures are taken. That means managing and increasing the area of wetlands and grasslands — “animal-friendly areas” — so that deer and other prey species can thrive.

Budwa Bote arrived in Chitwan with his family 20 years ago, settling into a small clay house on a plot of land on the outskirts of Sauraha. Like many here, he has lost water buffaloes to tigers.  Budwa himself has also been attacked by a tiger. He also tells of elephants raiding his crops, and shows the severe leg injuries he suffered during an encounter with a sloth bear in the forest, as well as deep scars on his buttocks when he was gored by a rhino.

Even if he wanted to move, he says, he can’t; his livelihood depends on his being here in the midst of the tigers and rhinos.

“I need to enter the forest to fish so that I can feed my family,” he says. The Bote are an Indigenous community that relies on fishing the Chitwan River using traditional throw nets. While the park officially allows 250 permit holders to fish on the periphery of the protected area, no new permits are being issued or lapsed permits renewed, according to a report by The Third Pole.

Budwa says he hopes the government will expand the number of fences and walls that keep the animals out of the villages. Living next to tigers is something he says he has come to accept; his family is opening a homestay to tap into the tourism revenue.

“This area is also home to the animals,” Budwa says. “If we can’t accept that, we will have to move elsewhere.”

Banner image: A boatman steers his canoe down a mist-shrouded river in Chitwan National Park. Image by Jonas Gratzer for Mongabay.