MANILA — The Philippines’ most traded turtle species, and among the world’s rarest, received a bit of a population boost as researchers introduced two juveniles in the wilds of the island of Palawan. The release occurred in February this year, but researchers only made the announcement this month. They add that the turtles’ behaviors recorded in the months since their release indicate they have a good chance of surviving in the wild.

The Philippine forest turtle (Siebenrockiella leytensis) is a freshwater species found nowhere else in the world. Heavy poaching of this turtle over the past 15 years pushed the Katala Foundation Inc. (KFI), a Palawan-based conservation group, to carry out extensive captive-breeding programs in hopes of rewilding areas where local populations have gone extinct.

Despite its critically endangered status, very little is known about the forest turtles’ ecology, biology and mating habits to guide conservation efforts. Sabine Schoppe, who leads KFI’s forest turtle program and is a founding member of the organization, tells Mongabay that the breeding program allows them to learn more about the enigmatic turtles — particularly their mating habits.

“The species is impacted by stress, which can cause infertility and diseases,” Schoppe says, adding that a female forest turtle lays only one to two eggs per clutch and six eggs at the most in a year. Even with human care, Schoppe and her team saw “high losses” during the egg and hatchling stages.

After a decade of unsuccessful attempts, the conservation facility welcomed its first hatchling in June 2018 — a breakthrough for the program and a sign of hope for the continuity of the species. Since that first hatchling, 16 more juveniles have hatched at the facility. With the release of the first two turtles earlier this year, there are 15 juveniles remaining at the breeding facility, and in time they too will be released, researchers say. Schoppe says they hope to continue monitoring the first two turtles in their release sites by using baited traps once a year.

U.S. herpetologist Edward Harrison Taylor first described the turtle in 1920 based on two specimens thought to come from Southern Leyte in the eastern Philippines. Notable for the distinctive ginkgo-shaped scutes, or bony plates, that run down the center of its shell, the species was not seen again until 1988, when a single specimen was spotted in a market in northern Palawan, more than 1,400 kilometers (870 miles) east of Leyte.

Scientists assumed the turtle arrived in Palawan by inter-island trade. It was also thought the species may have gone extinct in what was believed to be its home region of Leyte since surveys there had yielded no sightings. Herpetologists later realized they may have been looking in the wrong place: a 2004 paper concluded that the specimens Taylor described from Leyte were in fact turtles from Palawan, meaning the forest turtles never appeared in Leyte to begin with.

With a clear habitat source matched by a critically endangered status designated by the IUCN, the forest turtle soon became among the most coveted in the world. In the years that followed the IUCN designation, KFI received hundreds of rescued forest turtles — figures that exceed their population estimates.

For example, Schoppe and her team estimated that around 3,000 adult turtles are left in the Palawan wild, but a single seizure in 2015 confiscated 3,921 forest turtles. Conservationists were faced with two theories: first, that there are still unrecorded and undersurveyed areas where these species thrive; and second, the remaining wild population may have already been wiped out.

From the thousands of rescued turtles, the facility plucked out an “assurance colony” from which researchers “can augment natural populations that suffered losses and we could eventually reintroduce the species to areas from which they have vanished,” Schoppe says. The two recently released juveniles were born from parents from the assurance colony that KFI has taken care of over the past five years.

In general, turtles, both freshwater and seawater, have a high mortality rate, Schoppe says, adding that bigger turtles have higher survival rates. As such, the turtle pair reintroduced to the wild in February were the optimal size and weight to reach maturity: weighing between 370 and 590 grams (13-21 ounces) and with body lengths of 13-16 centimeters (5-6 inches).

To prepare for rewilding, the group raised the turtles in enclosures that mimic their natural environment — swamp peat forests — and fed them a diverse diet over the past three years. KFI also tested different trackers and settled for one that lasted for three months.

Schoppe says their chosen site is a protected area and is well-managed, factors that assure them the turtles can’t be poached. All things considered, the turtle pair “have a very good chance to reach adulthood and multiply.”

While Philippine forest turtles are included in a blanket protection management plan, they receive little attention despite their ecological importance and uniqueness, in part since marine turtles are more familiar and wetland ecosystems are not well appreciated in the country, experts say.

“Many of these less-charismatic freshwater species are neglected and often don’t receive the conservation attention they need,” says Sonja Luz, deputy CEO of Mandai Nature, KFI’s conservation partner. “With some of our work focused on critically endangered freshwater species, this milestone is particularly close to our hearts.”

Researchers say the major threat to the species is still the demand for it in the black market, driven by its critically endangered status. The designation, while intended to encourage a more stringent protection scheme for the turtles, has instead driven up its desirability among pet collectors and triggered a poaching boom.

A study published in the Philippine Journal of Systematic Biology shows 23 incidents resulting in the confiscation of 4,723 Philippine forest turtles from 2000 to 2018. “I think one of the missteps was the declaration of the species as critically endangered in 2000,” study author Emerson Sy, from the wildlife trade monitoring group TRAFFIC, tells Mongabay. 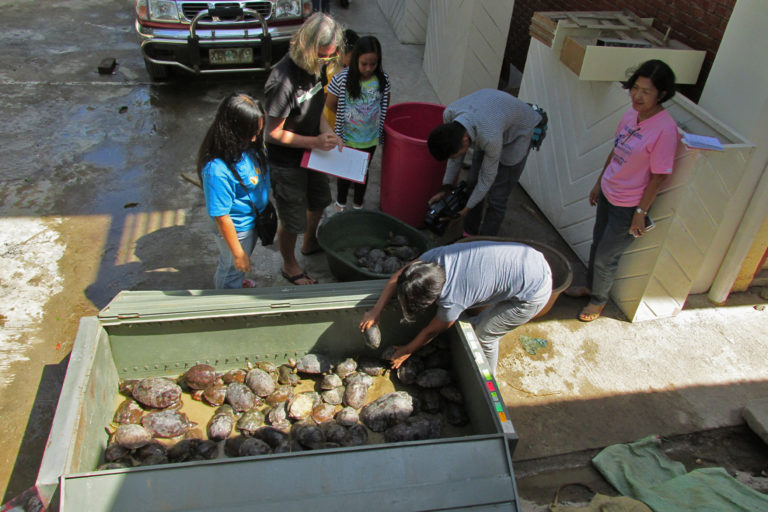 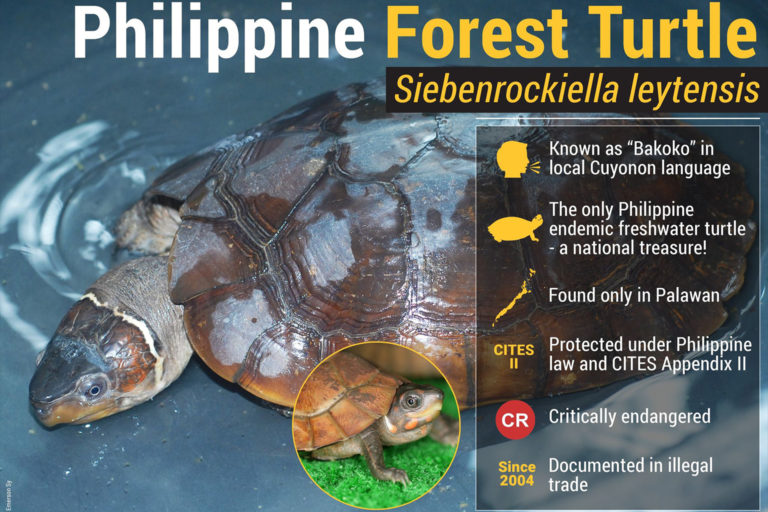 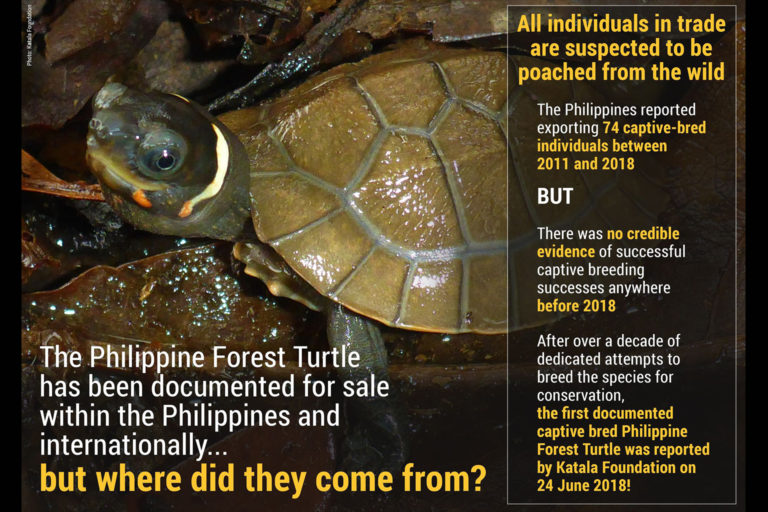 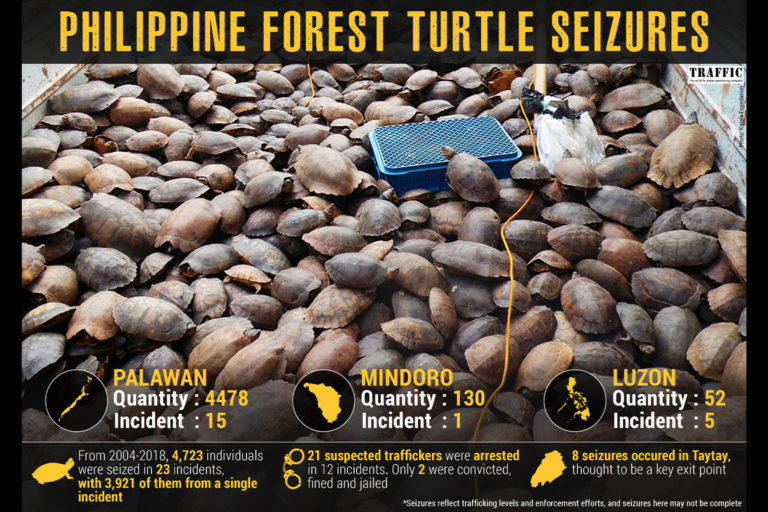 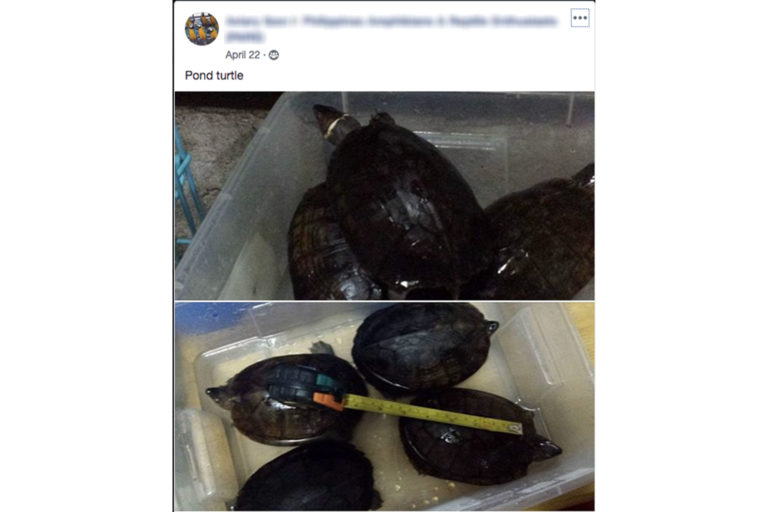 Experts also say high trading prices trigger heavy poaching, which can be an indicator of the scale of wildlife laundering, when a farm or a zoo declares an animal they purchased illegally as being captive-born. Registered zoos and breeding facilities have claimed to have successfully bred the turtle species in the past, even before KFI recorded its first successful hatching in 2018. Some private zoos claim in their reports that they have hatched 50 turtles from 10 female adults in one batch, which is biologically impossible, says Sy.

His study shows that, from 2011 to 2018, 74 forest turtles purported to have been born in captivity were exported from the Philippines. This was despite the ban on the trade and collection of forest turtles.

“The trading of this turtle species is concerning. I’m sure the wildlife authorities in the country are fully aware of what’s going on,” Sy says, adding that wildlife laundering has been happening in the Philippines for the past 10 years and has been used to provide legal cover for the illegal trafficking of wildlife from Indonesia and the Philippines.

Schoppe, who co-authored the study, says the illegal trade and collection of the forest turtle continues. Last year, TRAFFIC reported four advertisements for Philippine forest turtles amid the COVID-19 pandemic.

As such, conservationists recommend creating an inventory of all previously registered captive Philippine forest turtles in both private and public facilities and “ascertain that these are not permitted for any trade.”

While agencies and government offices push for the revision of the country’s wildlife law, which would increase jail time for offenders and include wildlife syndicated crime and laundering, Schoppe says the focus on the conservation front is to protect the habitats of this species.

“More protected areas with stronger management and enforcement should be created to address the threats to this turtle,” Schoppe says. “We’re going to lose this turtle if we don’t act now.”