One-hit wonder frog makes a comeback in the southern Philippines

In 1993, a lone stream frog was discovered once but never found again in the wild. Herpetologists thought the frog species went extinct before it could be studied. Then, last year, more than a quarter of a century since the frog was seen, two Filipino biologists rediscovered it in one of the least surveyed forest reserves in the southern island of Mindanao.

The rediscovery tale of Pulchrana guttmani, the species first described from Mount Busa on the border of Sarangani and South Cotabato provinces, is an intriguing one. Despite being big enough to cover half a grown man’s palm and with a striking golden-brown body contrasted by a grayish-blue underbelly, the frog species has eluded herpetologists and confused Indigenous guides who tried, yet failed, to spot the species in the thicket of the Mindanao wilds.

In a paper published in Herpetological Notes, Kier Pitogo and Aljohn Saavedra reported the rediscovery of what they say may be the rarest amphibian in the Philippines, and possibly, the world.

“Despite its brightly colored body and large size, it has eluded biologists for decades!” Pitogo tells Mongabay. “What makes it special is the fact that it is the only Philippine frog for which no known sightings of living individuals have been documented since its original discovery. So, you can consider it as one of the rarest amphibians, if not the rarest, in the Philippines.”

P. guttmani was first introduced to science by Rafe Brown of the University of Kansas in a study published in the journal Herpetologica in 2015. By then, Brown had been studying the lone specimen for more than 20 years – initially mislabeled, he wrote, as the more common P. granducola, another frog in the southern Philippine region.

That single blue-bellied frog first made its way, by accident, into Brown’s survey loot from 1993, when Brown and his team hurried to collect, examine and identify amphibian species in the Mt. Busa reserve before commercial logging could nip their existence in the bud.

The Busa mountain range isn’t a protected area but it’s within the 102,350-hectare (252,900 acres) Allah Valley, a declared forest reserve since 1985. It’s also an important bird habitat, with recent sightings and rescues of the critically endangered Philippine eagle (Pithecopaga jefferyi).

But in the early 1990s, the lower slopes were opened for a commercial logging concession, driving Brown and his team on a “salvage operation” to cover as much ground as possible. “As we built our camps, higher and higher on the mountain, the loggers were destroying the forest just below us,” Brown recalls.

“This site was, without a doubt, the most impressive lowland dipterocarp forest I’ve seen in my life, with absolutely huge timber … and it was being levelled — completely destroyed — right in front of us,” he tells Mongabay. “For a team of biologists like us, who care so much about habitat for rare and endangered species, this was absolutely heartbreaking.”

Brown collected more than 90 P. grandocula specimens at the time. These frogs were preserved and divided among two institutions in the Philippines and the U.S. Among these, Brown noted “a single morphologically aberrant individual” that possessed “several unique morphological characters” distinguishing it from the more common P. grandocula.

“When I went to the museum and sorted out all my specimens, located the individual with the correct field tag number corresponding to the genetic sample number, I could immediately see the differences, which I had missed in the field,” Brown says. “That started the whole adventure … 30 years ago.”

Brown waited and waited, he recalls, for the opportunity to return to the mountain and for the new technology — through DNA sequencing — to confirm the new frog species. “The one sample was not even most closely related to P. grandocula, and I finally wrote the paper naming it as a new species in 2015,” he says.

Brown described the frog as a new species of “extreme rarity,” adding that it might be “patchily distributed in hard-to-access areas.” Worse, the species could be extinct since no specimen has been seen, collected and studied since 1993. 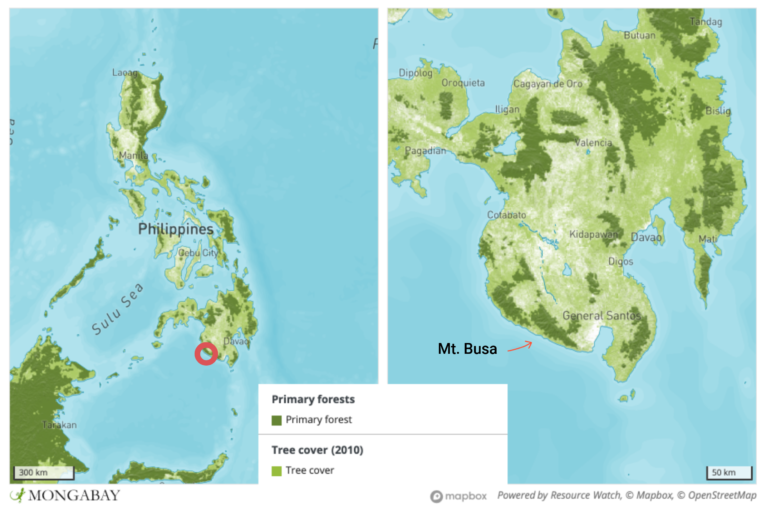 Even for Indigenous peoples who act as guides for researchers during surveys, P. guttmani has been impossible to identify in the wild. The local government holds no records of the species. Pitogo points out two possible reasons for this: There’s little description about the elusive frog, and P. guttmani is too similar to P. granducola at first glance, such that misidentifying the rare frog is common.

“In describing species, you would normally examine at least 10 or more individuals to note for variations,” Pitogo tells Mongabay. “The two species are hard to differentiate for an untrained eye. It was really a challenge to look for this species because we didn’t know what a living individual looks like and what was its natural history and preferred habitats.”

Since 2018, Pitogo and Saavedra have been doing targeted herpetological fieldwork on Mt. Busa to record amphibians and reptiles there — and to find the lost frog species that piqued Pitogo’s curiosity since he read Brown’s paper in 2017.

The researchers recall spending “countless nights and resources” and getting disheartened when they returned from surveys empty-handed. “But I guess it’s part of the journey when finding a lost species — there’s no guarantee of finding it,” Pitogo says.

But by last September, the elusive P. guttmani finally revealed itself to the researchers. After a night survey, Pitogo recalls that the local guide brought frogs he had captured from a nearby stream. That’s when the duo noticed that one “unusual” frog.

They hiked to the fast-flowing stream and found four more distinctive frogs. “The brightly colored body caught our attention,” Pitogo says. “Upon closer inspection, we knew that what we were looking at was not P. grandocula but actually the lost amphibian P. guttmani. It was a eureka moment for us — that’s why it looked unusual because it was the amphibian species I’ve been looking for for a long time!”

There’s even more to learn about the elusive species, he adds. With the lack of studies on its natural history, they could only concur that the species occurs in “high-elevation, hard-to-access streams, and it probably has little to no tolerance to disturbance.”

The dearth of information and specimens also make it tough for the researchers to pinpoint if the frog has been extinct or extirpated prior to its rediscovery. As the survey area is among the least studied in the country, conducting further studies on the rare amphibian to establish a baseline population and conservation status will be challenging.

They say one thing is for certain: The mysterious case of P. guttmani is a cautionary tale for the Philippines, a country whose dwindling forest hosts some of the world’s rarest species. “To think that P. guttmani was described only from a single specimen, you would know how urgent the situation is for this species and its habitat,” Pitogo says. “More importantly, it foreshadows the fate of Philippine amphibians if we continue to lose forest cover.”

Most amphibians in the Philippines occur nowhere else in the world. Many species can only thrive in small and specific areas in the country and are threatened by drastic changes in land use. While scientists have tried to record these species, there is a generally low understanding of Philippine amphibians, which poses challenges for their conservation, Brown says.

Further, the limited knowledge of the country’s frogs makes them vulnerable to the invisible killer chytrid, a fungal disease that has wiped out amphibian species across the world.

No local government in the country has adopted a frog as its flagship species, Pitogo points out, since frogs are not as charismatic as birds and mammals nor are they as popular as plants. “People will have a hard time understanding why we should allocate resources and efforts for the protection and conservation of frogs,” he says. “It can be done, but it will take time and a lot of patience.”

There are moves to increase protection in the proposed Allah Valley protected landscape, where this species could be found. While the area remains hard to access, the rediscovery of P. guttmani underscores the area’s ecological importance, Pitogo says. “The case of P. guttmani is a reason enough to push for the legislation of the [Allah Valley] as a protected area,” he adds.

For both Brown and Pitogo, the rediscovery opens the lid on the many mysteries of the mountain range — and the species there that await discovery. “This has been one of the most interesting chapters in my career,” Brown says, “and I absolutely love sorting out these mysteries that stretch on over the years.”