Luísa Carvalheiro says she remembers a time when açaí was just a humble berry, a staple for the Amazon’s Indigenous communities. That was before the inky purple berries became all the rage in Europe and the U.S., a so-called superfood promising everything from weight loss to lasting youth.

Claims about the powers of this fruit of the South American palm (Euterpe oleracea), some justified and some spurious, have proliferated. But what really disturbs ecologist Carvalheiro and her colleague Felipe Deodato da Silva e Silva, both based in Brazil, is this: with the export of açaí, Brazil is also exporting the services of its precious pollinators.

It is another in a long line of pollination-dependent tropical crops feeding the global market.

So, da Silva, an expert in ecological economics, set out to do what economists do best: put a value on the service. They tracked international trade in 55 pollinator-dependent crops from 2001 to 2015. The analysis is inspired by Virtual Water, which tracks water flows that take place in the guise of goods trade.

Experts are calling its application to pollination services “novel” and “exciting.” 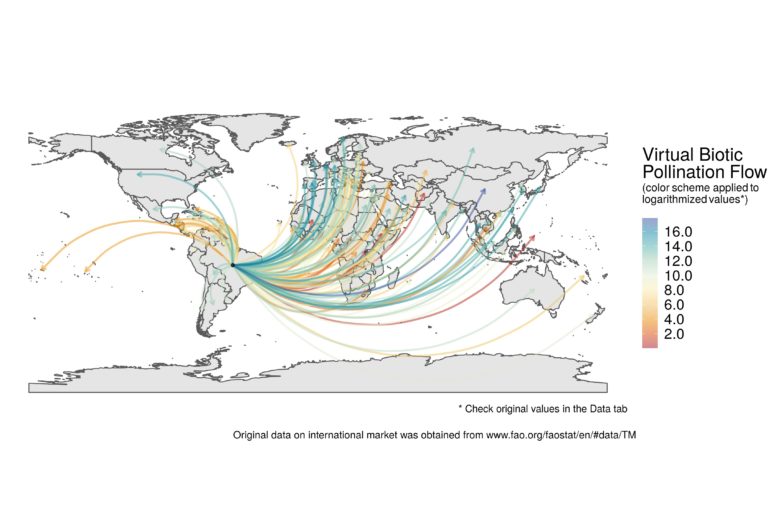 An online tool shows how high-income countries place enormous demands on developing countries’ pollination services by importing pollination-dependent crops. For example, Europe and the U.S. rely heavily on Brazil’s pollinators to put avocados and mangoes on their plates.

“Large developed nations are dependent upon the pollination services of the developing world, and we need to have a deeper discussion about the environmental justice at play here,” said Tom Breeze, an ecologist at the University of Reading, U.K., who was not involved with the study.

The analysis breaks down the movement of goods as a trade in raw materials and the fruits of labor, not necessarily human labor.

Bees and butterflies are the world’s foremost pollinators. Like many insect species, they have witnessed a precipitous decline in recent decades. Their disappearance doesn’t just impact local food webs; it could destabilize global food supplies. More than a third of all global crop yield relies on pollinators, and more than half of the crops traded between countries are pollination-dependent.

The pool of pollinators is finite, and so are the services they provide. Pesticide use, habitat destruction, and, in recent years, climate change have wreaked havoc on bee populations.

For açaí palms, native bees ferry most of their pollen, including stingless bees. Climate change will have disproportionate impacts on pollinators in the tropics, a recent study from Colombia found. If countries don’t drastically curb their greenhouse gas emissions, the habitats of seven out of nine stingless bee species found in Colombia will shrink, the research showed.

“As my work on pollination is primarily in Colombia, a developing country in South America, this article and its online tool will be useful as a starting point for starting to educate local policy-makers and government agencies on the importance of pollinator-based crops for the country’s economy,” said Victor H. Gonzalez, the first author of the Colombia paper and ecologist at the University of Kansas.

How much pollination services contributed to the Colombian economy is currently unknown, according to Gonzalez.

The new study reaffirms that threats to biodiversity in one country endanger ways of life everywhere.

It is not just the sheer demand for crops from other countries; the kind of crop also makes a difference. Coffee, soybeans, oranges, apples, watermelons, mangoes, and avocados all require help to disburse their pollen.

Palm oil plantations have displaced rainforests in many parts of the country. The gobbling up of natural habitat by cropland, while increasing the demand for pollination services, has at the same time reduced the natural habitat available to these insects.

Pollination services may be free, but they are not without hidden costs. Residents of regions where the crops grow bear these costs.

While managed pollination is an option, wild pollinators are better at the job. To entice these highly efficient pollinators, these countries must keep natural habitats intact. That means, in many cases, forgoing gains from converting wildlands into cropland.

It isn’t just exotic fruits and unseasonal vegetables that drive this pollination demand. The hunger for healthier diets, rich in fruits and beans, is a factor too. “The demand for healthier foods leads to a higher demand for pollinators,” Carvalheiro said.

It also raises questions about how goods are valued. “Pollination services are one of the ecosystem services that farmers really benefit from,” da Silva said. “The environmental costs associated with those services are not incorporated into the production cost or the market price.”

With payment for ecosystem services becoming a popular strategy to fund conservation, attempts to define those services’ value are gaining urgency.

“We in the west demand our freedom and want sustainability with little regard for whether the countries we are buying from can afford that sustainability and what it will do to their development,” Breeze said. “we can’t have it all for peanuts, and international aid or even the price of our goods should include support for biodiversity.”

(Banner Image: A pollinator on an açaí palm flower. Image by Cristiano Menezes.)