A Philippine community sees life-saving payoffs from restoring its mangroves

AKLAN, Philippines — In December 1989, Elizabeth Ramos, now 63, heard from a neighbor that a mangrove reforestation project was underway near her home in the province of Aklan in the central Philippines.

The meeting Ramos joined that day was for a reforestation effort by the Department of Environment and Natural Resources (DENR), which had hired 30 local families to plant 50 hectares (124 acres) of mangroves in the mudflats of the adjoining villages of Old and New Buswang.

Ramos was not one of the villagers originally selected to participate in this livelihood scheme, which offered people 75 centavos (then about 4 U.S. cents) per tree planted. But when other participants backed out, Ramos stepped in, ultimately becoming an integral part of a program that would reshape both her life and her community.

Three decades since that meeting, the initial 50 hectares has expanded to 220 hectares (544 acres), thanks to both ongoing planting efforts and natural reforestation. The Kalibo mangrove is considered a major tourist attraction; in 2019, prior to the COVID-19 pandemic, the mangrove forest registered 38,455 foreign and local tourists, and the Kalibo Save the Mangrove Association (KASAMA), founded by the planters, has received several national awards.

The regenerated mangrove forest is also credited with shielding nearby villages from the worst of the impacts of Typhoon Fengshen in 2008 and Typhoon Haiyan in 2013, both of which battered other parts of Aklan province. The Kalibo project also stands as a bright spot in a country working to restore its mangroves. From an estimated 500,000 hectares (1.24 million acres) in 1918, the country’s mangrove cover dwindled to 120,000 hectares (297,000 acres) in 1994. After various reforestation and conservation efforts, the Philippines now has around 250,000 hectares (618,000 acres) of mangroves.

The mangrove reforestation project was the brainchild of Allen Quimpo, the mayor of Kalibo at the time, who negotiated with the DENR for the mangrove plantation. Quimpo, who later became a congressman representing Aklan province, reportedly decided to reforest the area after learning from local historians that the area was once full of mangroves that were cleared for illegal fishing activities. Quimpo died of cancer in December 2016, aged 71.

Despite this high-level support, the program faced skepticism and opposition at the local level. KASAMA’senvironmental security officer, Willy Ramos, a distant relative of project pioneer Elizabeth Ramos, says fisherfolk groups contested the project because the mangrove area included a 50-hectare flatland that fishers used to moor their boats.

Others were skeptical about the government’s promises to pay planters for their work, aware of other cases where the government had delayed payment for given projects. In particular, some of the landowners who had been relocated for the construction of Kalibo Airport in the 1980s say they have still not received the promised compensation from that project. 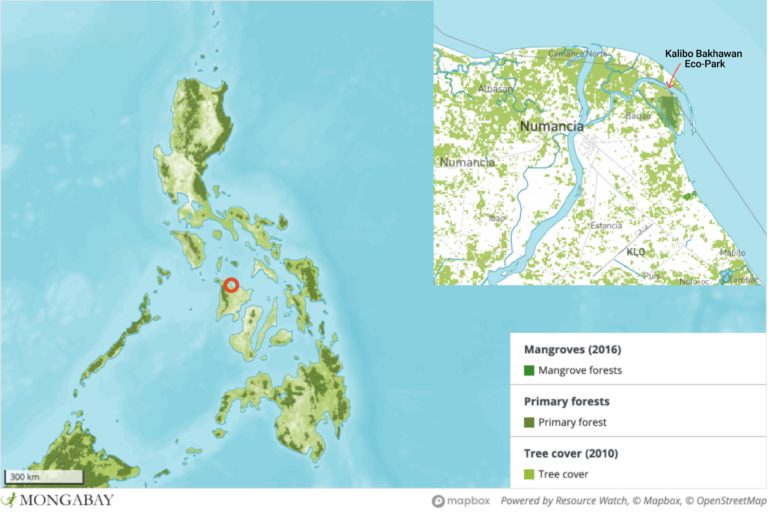 But the local government persisted, continuing to hold regular meetings about the project, and tapping the Uswag (Progress) Foundation to provide microfinance loans for participants. It was under this deal that the planters eventually agreed to do the synchronized planting.

The first round of planting got underway in January 1990, but the project still faced obstacles.

“Among the challenges we encountered are the illegal fishing and trespassing of non-residents,” Elizabeth Ramos says. “For some time, there was a time that fish pens have been established inside the mangrove area. We later learned that illegal fishers built the fish pens at night. Armed with bolos [machetes], KASAMA demolished the fish pens despite threats by the alleged owner. Fortunately, the owner of the illegal fish pen died and so the issue stops.”

In 1994, the DENR formally recognized KASAMA through a forest land management agreement (FLMA). Under the agreement, the DENR granted KASAMA 25 years to manage the mangrove site. The FMLA also gave KASAMA the rights to sell, process, or otherwise use all products grown in the mangrove area, in exchange for undertaking long-term maintenance and protection of the forest.

In December 2000, the FLMA was converted to a community-based forest management agreement (CBFMA), with similar terms and conditions.

Because of the success of KASAMA in mangrove reforestation, the program received several accolades from the DENR. Quimpo was also posthumously recognized with a Pillar of Climate Leadership award by Al Gore’s Climate Reality Project. The area is also now being officially called the Congressman Allen S. Quimpo Bakhawan Eco-Park.

Today, the mangrove reforestation project has expanded, via various campaigns by NGOs, to 220 hectares of mangrove in the adjacent municipality of New Washington town.

The replanting, as well as the spread of mangroves growing naturally in adjacent barangays, or hamlets, had a huge impact in 2008, when Typhoon Fengshen, known in the Philippines as Typhoon Frank, battered Aklan province, says Allan Angelo Quimpo, son of the late mayor who now heads KASAMA. The mangrove forest was already in full bloom by then, and protected the community from the battering waves, Quimpo says.

During and after the typhoon, however, tons of mud from the Aklan hinterland were spread across the mangrove plantation. Recent assessments show the soil covered by this mud is no longer compatible with some of the mangrove species planted, highlighting the need for further soil specimen testing to identify the mangrove species that would be suitable for planting in the area.

“Initially we thought that the mud would help boosts the reforestation effort, but soon after we realized that the drifted [mud was] not compatible to every mangrove species,” Quimpo says. “Right now, we are [encouraging] planting mangroves depending on the quality of mud available in the given area.”

In 2013, another typhoon, Haiyan, also battered Aklan province. By then, the mangrove had expanded to 200 hectares (494 acres), and it cushioned the threat of floods and storm surges in Aklan’s coastal areas.

Quimpo says the healthy mangrove ecosystems have also helped nearby communities survive the economic impacts of COVID-19, which closed trade routes. “Families along the mangrove reforestation during the COVID-19 pandemic [have] abundant … fish and seashells,” Quimpo says.

But problems remain. “Illegal fishing continued to be our biggest threat,” Quimpo says. “We however regulate the fishing in coordination with the members of KASAMA.”

Mangrove trees are also being cut to be sold as fuelwood, Quimpo says. He attributes the problem to a handful of local residents as well as those from surrounding villages. “Fortunately, most of the residents never attempted to cut the mangrove trees and sell it as wood fuel,” he says.

Soil erosion is also a growing concern, affecting up to a fifth of the mangrove area, Quimpo says. Researchers from the University of the Philippines-Visayas are currently undertaking a study on the sustainability of the mangroves and how to cope with issues like erosion, he says. “While we are awaiting … the conclusion of the UP study, already we are now starting to worry about it.”

Quimpo says he’s also worried about the long-term sustainability of the mangrove due to rising sea levels, which may widely affect the mangrove forest.

To further sustain the mangrove reforestation project, Quimpo says the eco-park has now been reopened to tourism but with limited guests. Tourism receipts are a primary source of funding for KASAMA.

“We have a pending request with the Provincial Inter-Agency Task Force on Emerging Infectious Diseases to allow children to enjoy the eco-park,” Quimpo says. While the area is no longer under community quarantine measures, minors younger than 15 years and senior citizens 54 and older are still not allowed to visit the area, Quimpo adds.

KASAMA is also now lobbying for an institutionalized program for mangrove sustainability, in which local governments must allocate funding for the protection of the Aklan River that runs through the Kalibo mangrove.

“If the local government would provide funds for the protection of the Aklan River in … the municipality and in the hinterlands, we could ensure our environmental sustainability,” Quimpo says.

Since the success of Aklan’s mangrove replanting effort, KASAMA has been actively involved in taking care of mangrove seedlings. It is lobbying to become a provider of these seedlings under a bill now before Congress that would require parents and graduating senior high school and college students to plant 10 trees each. Under KASAMA’s proposal, each seedling would cost 5 pesos (10 cents), and parents and graduating students could opt to plant them inside the mangrove forest or somewhere else.

Banner image of the mangroves at the Bakhawan Eco-Park, Aklan, Philippines. Image by Alexey Komarov via Wikimedia Commons (CC BY 3.0)