On a Philippine island, Indigenous women get their say on marine conservation

MANILA — In the Philippines, the fishing industry has long been considered male territory, with fathers, sons and brothers taking their boats out to sea each day in hopes of catching tuna, blue marlin, or sea bass. A closer look, however, reveals that women play an equally significant role.

In an analysis of women in select fishing communities in the country, most of the women surveyed say they are active participants in the entire value chain — from fishing, gleaning and picking, to selling and trading. A recent study published in PLOS ONE also shows that catches by women in Asia reach an estimated 1.7 million metric tons per year, which is worth $3 billion. Despite this contribution, women are rarely involved or tapped in important conversations in the community.

This is now being challenged in Calawit, an island that’s part of the Calamianes Islands located in the country’s western Palawan province. There, 15 women from the Indigenous and traditionally male-led Tagbanwa group were given more than 130 hectares (320 acres) of ancestral waters where they can harvest cachipay (Placuna spp.), a type of clam known as windowpane oysters.

Oysters have long been an important source of livelihood for the community, especially during lean fishing seasons or when the weather doesn’t allow fisherfolk to go out to sea. While harvesting them is a task traditionally shared by both men and women, ownership, and consequently, management of the ancestral waters had always been delegated to men. The fact that the women of the tribe have been granted tenurial rights over the domain by virtue of an official resolution signed by the Tagbanwa elders and members of the tribe’s executive committee is a major milestone.

“We are excited because, finally, women can proactively participate in natural resource management,” says Marilou Vergara, one of the women leaders in the community. “I can see that there will be a lot of opportunities for this project that can help us and our families in the long run.”

This initiative is also aligned with the tribe’s Ancestral Domains Sustainable Development and Protection Plan (ADSDPP). Created by each Indigenous group and facilitated by the National Commission on Indigenous Peoples (NCIP), these cohesive plans act as a guide for the sustainable and culturally respectful management and development of ancestral domain territories.

“We want to care for our natural marine resources, not just to create a sustainable fishery, but also to preserve our rich culture, which includes the oysters,” says tribe member Rosita Eguia. “The elders believe that we’ll be of help in developing our ancestral waters, which is why they gave the responsibility of managing the cachipay to us women.”

This change didn’t happen overnight. In 2019, PATH Foundation Philippines Inc. (PFPI), a conservation nonprofit, and Community Centred Conservation Philippines (C3 Philippines), a local NGO, were already coordinating with the tribe as part of the five-year USAID Fish Right Program implemented by the Coastal Resources Center at the University of Rhode Island.

C3 Philippines is at the forefront of the project, directly assisting the women on the ground. It also provides them with training so that they can improve their technical fisheries management skills and decision-making prowess.

It’s a move that appears to be paying off. While the men still ferry the women to where the oysters are found, it’s the latter who are now calling the shots. “The area is now being managed and controlled by women in terms of harvesting schedule and area to be harvested,” says Reynante Ramilo, C3 Philippines program coordinator. “Proper documentation and monitoring of the area, including the rivers and mangroves, are also being done by women.”

The women have acclimatized to their new roles with ease. “The Tagbanwa women are already being seen actively participating in decision-making processes in the community,” Ramilo says. “They are now more confident in terms of voicing out their concerns in different issues in fisheries and health and welfare.”

The importance of involving women in the marine conservation effort is especially crucial in communities where they manage habitats that are key to the entire ecosystem.

In Calawit, the women have majority control of the mangroves and seagrass beds, where they collect seaweed, salt and tamilok (woodworms), a local delicacy. These aren’t just an additional source of livelihood for the women; they also help mitigate the strain caused by overfishing in the greater waters. Oysters, which have now been turned over to the care of the Tagbanwa women, are also seen as an alternative to fish. 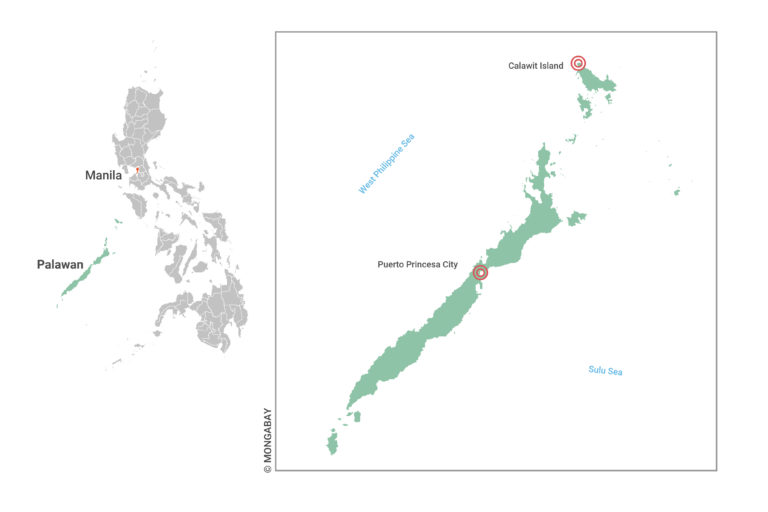 PFPI field program coordinator Vivien Facunla says the mangroves and seagrass beds are “a defense for coastal communities against the effects of climate change such as storm surges and flooding.”

Handing the responsibility of harvesting the oysters over to the Tagbanwa women isn’t just an effort to give them a share of the voice in the community. It’s instrumental in helping increase fish stocks in key marine biodiversity areas in the country.

Destructive fishing habits, along with climate change and pollution, have inflicted serious damage to marine ecosystems all over the world. In Calamianes, the second-largest fishing ground in the Philippines, marine areas are reportedly in poor or degraded states. An analysis of gender roles in Philippine fishing communities, including in Calamianes, found that populations of marine species such as finfish, oysters and corals are declining.

These areas are important breeding grounds for juvenile fish and other marine species. Calawit is rich in biodiversity, and, according to Ramilo, its habitats exhibit interdependence with each other. “Additionally, many of the marine species, such as fish and crustaceans, exhibit lifecycle stages that span more than one ecosystem,” he says.

To strengthen resource governance and conservation in the island municipality, it’s beneficial to establish a more balanced distribution of power among both men and women, says gender specialist Fredo Lazarte.

“It is fundamental to identify women’s roles in biodiversity conservation,” he says, adding that even the community’s council of elders recognize the Tagbanwa women’s innate resource management skills. Through managing the oysters, Lazarte says he believes the women can further enhance their “endogenous skills, knowledge, and attitude.”

Proof that a more balanced workforce is crucial to resource management isn’t limited to the fisheries space. The Regional Agricultural Trade Environment (RATE) assessment conducted among Southeast Asian countries in 2012 found that “giving women the same access as men to agricultural resources could increase production on women’s farms in developing countries by 20 to 30 percent.” The World Resources Institute also reports that projects in the water, sanitation and hygiene sector, another area with a lack of female representation, “can become more effective when women participate.”

Education and awareness campaigns have also been vital to the project, Ramilo says. But navigating projects involving gender equality and environmental conservation with local communities, especially among Indigenous groups with established sets of customs and traditions, requires a delicate balance.

Both the PFPI and C3 Philippines aim to do this by establishing open lines of communications and following prescribed national processes to ensure they don’t unintentionally cross a line or cause offense.

In dealing with the Tagbanwas of Calawit, Lazarte says they have secured the necessary free, prior and informed consent (FPIC) of the community with the help of a representative of the NCIP.

Within the Tagbanwas, traditional customs are also opening up to allow more active participation for women in the community. “It’s in the Tagbanwa culture that men preside over our community,” says female community leader Vergara, “but these changes are gradually making our elders recognize our rights to rule as women.”

While old-fashioned cultural norms about gender persist across the Philippines, changes are already underway. There are laws and resolutions in place to help address the disparity in power.

The Magna Carta for Women Act of 2009 promotes the empowerment of women, emphasizing that they should have the same rights, protections and opportunities available to every member of society. The Tagbanwa tribe’s ADSDPP also stipulates the importance of involving women in economic opportunities and natural resource management.

The project itself may be a harbinger of positive change beyond the community. According to PFPI’s Facunla, “Data gathered and local monitoring capacity contribute to science-based policies and actions that could bring about improved management of biologically significant areas.” Results from the project also present “potential models for learning and expansion in a larger ecosystems scale,” she says.

In other municipalities, similar projects are also being implemented. One of them is the Twin-Bakhaw project that promotes women as managers of mangroves. “It presents an opportunity for women to participate, lead and influence the decision-making process in managing the designated protected area and to have access to the marine resources,” Facunla says.

Getting women on the same equal ground as men at the community level is crucial to the survival of marine ecosystems, proponents of these initiatives say. And with support from their communities, laws, and environmental agencies, they can take the future of their community into their own hands.

By considering all these complex relationships, communities can implement what is known as an ecosystem approach to fisheries management (EAFM), which the U.N. describes as a strategy to “meet human requirements to use natural resources, whilst maintaining the biological richness and ecological processes necessary to sustain the composition, structure and function of the habitats or ecosystems concerned.”

This is only possible with the cooperation of both the men and the women of the community.

Banner image of a woman from the Tagbanwa Indigenous group, among the 15 women who now have control of over more than 130 hectares (320 acres) of ancestral waters off the island of Calawit in the Philippines.