When Hans Peter Lankes, a top official at the International Finance Corporation, visited Madagascar in February, he made it a point to tour the IFC-backed BoViMa facility near the southern port city of Fort Dauphin.

“Pleased to join President Andry Rajoelina in Fort Dauphin to talk about improving livelihoods in one of Madagascar’s poorest regions by ensuring livestock traceability, supporting farmers & opening sales channels — and how @IFC_org helps through BoViMa project,” Lankes tweeted about a meeting with the country’s president Andry Rajoelina during the visit.

But Rajoelina and the IFC are not on the same page when it comes to improving livelihoods in a country whose poverty levels rival those of war-torn Yemen and where 75% of people survive on less than $1.90 a day.

At the center of the discord is Madagascar’s cherished cattle breed: the zebu.

In 2018, IFC, the arm of the World Bank that invests in the private sector, approved a $7 million investment in Bonne Viande de Madagascar (BoViMa). The company wanted to buy zebu cattle from local herders, fatten them, slaughter them, and export the beef mainly to rich Middle Eastern countries like Saudi Arabia and the United Arab Emirates. The IFC promoted it as an endeavor that would “revitalize the country’s dwindling population of zebu.”

BoViMa purchased its first zebus in December 2018. A month later, Rajoelina came to power. One of his first decisions as president was to ban the export of zebus, calling into question the viability of the whole business. “The decree prohibiting any export of zebus is still in force. As a result, there is no exception to the rule for any company,” Michel Anondraka, the government’s director-general of livestock, told Mongabay.

The imposing zebus (Bos taurus indicus) hold great sway in Malagasy life, a preeminent symbol of prosperity. The fates of kingdoms have ridden on the backs of these humped cattle, which continue to shape the destinies of ordinary people. Malagasies eat their meat, use them to plow fields, sacrifice them at births and deaths, and sell them in times of distress. Zebu motifs pervade life, adorning everything from cars to the official seal of the Malagasy state. But the bovines themselves are fast fading from the landscape; their numbers have declined from 23 million in the 1980s to only about 6 million today.

Conserving these emblematic animals was a central promise of Rajoelina’s presidential campaign, which meant ensuring that they didn’t leave the country. On the other hand, the IFC has committed to support the commercialization of the traditional zebu industry, plugging it firmly into the global market for beef. 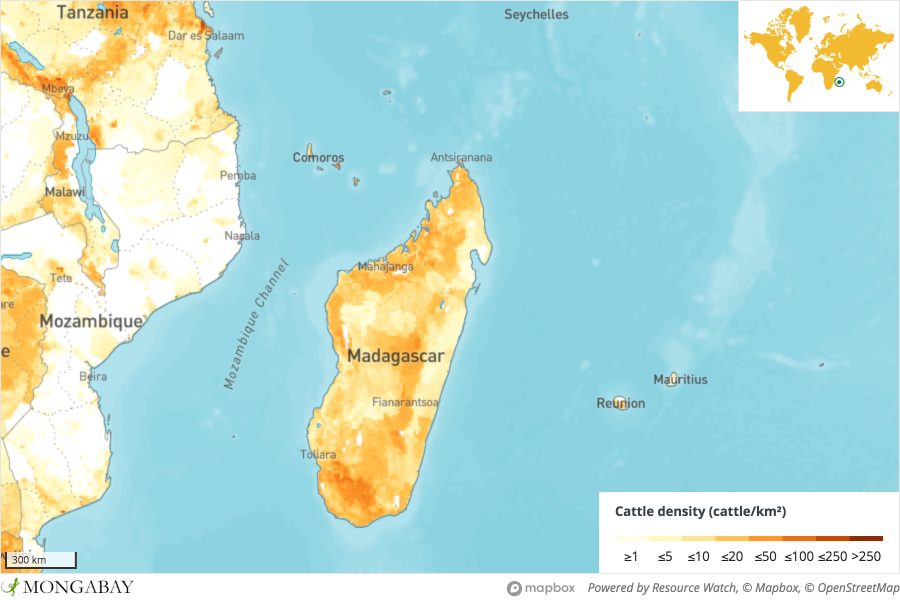 In Madagascar, zebus are considered more than just meat or money. Almost all Malagasy zebus are owned by individual families. Most have a few, while powerful elites own sizable herds, a sign of their wealth and prestige. Many zebu calves die young because of old-fashioned livestock rearing practices and lack of proper veterinary services in rural areas. Illegal exports, disease and food shortages have contributed to the decrease in population. The World Bank is investing in better veterinary services and infrastructure in the region to curb mortality and preserve the herd.

The BoViMa abattoir is supposed to be the first modern slaughterhouse in the country producing beef at an industrial scale. The project involves constructing a slaughterhouse with the capacity to butcher 8,500 zebus and 10,000 goats every year. It is expected to lead the transformation of Madagascar’s beef export industry into a $500 million market and would make BoViMa an agribusiness giant in a country with a GDP of around $14 billion.

In the last decade, the IFC has pumped more than $1.8 billion into livestock and factory farming projects across the world. Critics say it has done so with little heed to the climate change implications and other environmental impacts. There are concerns that despite the stated goal of reducing poverty, some of these endeavors may increase the concentration of wealth and leave smallholder farmers with little bargaining power.

BoViMa is owned by the Groupe Société Malgache de Transformation de Plastiques (SMTP), a Malagasy conglomerate comprising 20 companies involved in everything from industrial plastics to real estate to animal feed. SMTP created BoViMa in 2014 with the humbler ambition of capturing the regional market, supplying beef to islands in the Western Indian Ocean. Its plans remained in cold storage for years.

In 2017, the IFC stepped in, giving BoViMa a new lease on life, on a grander scale. That year the IFC launched a four-year program to provide advisory services, and in 2018 it announced a $3.5 million investment and another $3.5 million in funding for BoViMa under the Global Agriculture & Food Security Program that the IFC administers.

The IFC has also funded another SMTP project in the poultry sector, a $3 million investment toward a $6.8 million proposal to expand production of chicks and animal feed, and build a poultry slaughterhouse. “IFC’s investments in the animal protein sector are focused on helping build responsible, productive companies that create jobs and support food security,” the agency said in a statement to Mongabay. As part of the World Bank Group, the IFC’s mission is to reduce global poverty.

In Madagascar, the $15 million BoViMa project would not have been possible without the IFC’s intervention. “These international institutions have given the necessary momentum and means to carry out this project,” Danil Ismael, CEO of BoViMa and head of SMTP, said at a meeting last year at the IFC headquarters in Washington, D.C. “Let us not forget that BoViMa fits perfectly with IFC’s logic, in developing countries, because our activity has a strong social impact, including real poverty reduction,” he said.

The south of Madagascar, which includes the Anosy region where BoViMa is located, and two neighboring regions, is one of the most impoverished places on the planet. Only a sliver of the population, about 10%, live above the poverty line. Drought-induced famines are frequent, and rainfall patterns are becoming more unpredictable owing to climate change.

The project has the potential to transform the south, Marcelle Ayo, the IFC country manager for Madagascar, told a local French-language newspaper this March. According to SMTP, the BoViMa project aims to directly employ 200 people, but the real benefits could flow from boosting incomes of 20,000 small farmers and cattle owners.

The company does not breed or raise the cattle, but instead buys them from farmers who would otherwise sell them in traditional markets. Most farmers are yet to see benefits from it and some are skeptical. “I think it only offers jobs to young people but not for the majority of the population,” said Tsimioma Roberson, a resident of Manambaro commune, the closest settlement to the slaughterhouse, who owns eight zebus. He had not sold any cattle to BoViMa.

Exporting zebus is a hot button issue in Madagascar. Zebus don’t just symbolize prosperity on the island nation; they are also an important food source in a country where nearly half of all small children suffer stunting due to malnutrition. The sale of zebus to BoViMa for export, some fear, could disrupt the local food economy and deepen food insecurity. “Of course, there are benefits for local breeders. The disadvantage is that there is more meat for the city than for the villages,” said Razafimahaly Edwin Dindo, the owner of 20 zebus in Manambaro.

At the BoViMa feedlot, the zebu would gain almost 100 kilograms (220 pounds) over three months before being slaughtered. Fattening of zebus also raises food security concerns for humans. BoViMa estimated that it would require up to 120,000 tons of animal feed every year. This includes crops like manioc, maize and sweet potato that local people consume, as well as elephant grass and white lead tree (Leucaena leucocephala).

It is not just food that is scarce in the region; so is water. Growing maize, a crop that guzzles tremendous amounts of water in southern Madagascar, was criticized as a strategy in a 2018 World Bank report. The operation of a slaughterhouse and feedlot will also need more than 150 million liters of water a year. BoViMa proposed to build a dam on the Ifaho River that runs close to the project site, but work is yet to start.

Observers say the project could also contribute to general insecurity in the region. One of Rajoelina’s reasons for banning the export of zebus was the rise in cattle theft. Although cattle theft is a traditional practice in southern Madagascar, it has transformed into a modern menace. A turning point was the sharp deterioration of law and order across the country in 2009, when a military-led coup brought Rajoelina to power for the first time. Cattle raiding gangs now strike farms, attack vehicles, and murder people.

Between 2011 and 2016, cattle raiders waged more than one attack a day, on average, and the death toll from the raids ran into the thousands. In 2017, raiders stole 30,000 zebus, the Associated Press reported.

The problem has persisted across administrations, but it has made sourcing animals for slaughterhouses notoriously risky. “Chinese abattoirs, legally established with permits issued by the Ministry for Livestock indeed receive a lot of stolen zebus,” said a 2017 report by the French Institute of International Relations (IFRI), an independent think tank. The World Bank itself recognized the gravity of the problem: “The region’s isolation plays a large part in its insecurity, with traditional cattle theft evolving in recent times, into organized crime,” the group’s 2018 report noted. “This cattle theft was likely exacerbated by criminals delivering cattle to some partially foreign-owned export abattoirs.”

For the BoViMa project to succeed, it would have to ensure that the zebus it buys are not stolen. Interviews with villagers near the project site revealed that cattle raiding continues to plague the area where the project is located. Roberson, the local farmer, described how seven of his neighbor’s zebus were stolen last month. The thieves are yet to be caught.

In a bid to crack down on cattle theft, last year the Malagasy government experimented with tagging cattle. Videos of tracking chips being shoved down the throats of terrified zebus made the rounds on the internet. The stout sausage-shaped capsules were to remain in the zebu’s stomach till it died. The program was supposed to tag 10,000 animals last year and ultimately expand to cover 2.5 million zebus. The project fizzled out because of lack of funding.

However, the issue of cattle raiding finds little mention in BoViMa’s environment and social action plan. SMTP did not respond to Mongabay’s questions, including ones about how it would ensure the cattle it obtained are not stolen.

Six years after BoViMa was born and three years after the IFC funded it, the project remains in pilot phase. Currently, there are about 70 zebus at BoViMa, but with the export ban in place, they are not going anywhere. The COVID-19 pandemic and related shutdowns have stalled the operation further. Together, the ban, delays and concerns about the impact on the local economy and food security could undermine the project’s transformative potential. The IFC Madagascar office declined to comment on its investment in the project.