Consider what’s below the canopy, too, when counting up forest areas (commentary)

The screech of scarlet macaws high overhead. The dawn rumble of howler monkeys. The hammering of a greater spotted woodpecker.

These are some of the sounds I have had the pleasure of hearing in forests and woodlands I have visited. But sounds like these cannot be taken for granted. It is long established that more and more of the world’s forests are becoming “empty” or “silent.” This has all kinds of ecological consequences, but notably hinders a forests’ ability to regenerate and hence its ability to absorb and store carbon.

It has been a challenge, however, to put a global measure on this worsening trend for forest wildlife. This is one reason that global goals and targets on forests, including for example the New York Declaration on Forests, the Sustainable Development Goals and even the Aichi Targets on biodiversity, have only focused on areas of forest gained or lost and not the health of those forests. Indeed, the recently released UN figures on forest cover show a consistent slowing in the loss of forest cover, but commentators have highlighted that these statistics reflect only quantity of forest and not quality.

WWF and other organizations are trying to address this blindspot. Last year with our partners we published Below the Canopy and the science underpinning which will be published in the Proceedings of the Royal Society journal in June. Today that research is featured in the 2020 State of the World’s Forests publication from the UN’s Food and Agriculture Organization (FAO). This report, released every two years, is an important companion to their forest statistics mentioned above. The 2020 issue is released on the International Day for Biodiversity and focuses on biodiversity and people. 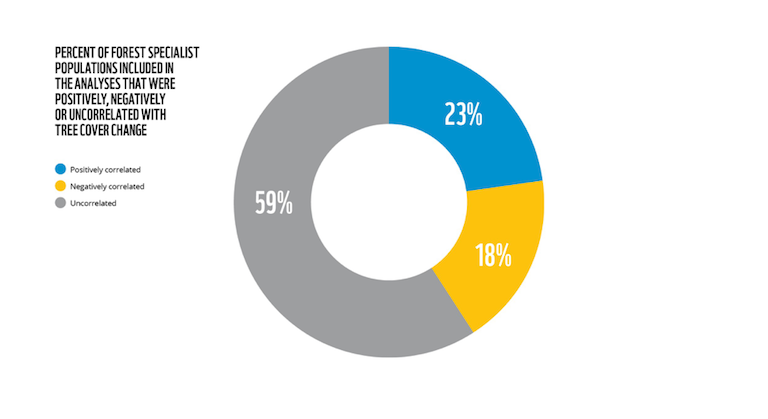 There were two major findings of our work. The first was that monitored populations of forest specialist species – species that only live in forests – have declined in size by 53% since 1970, on average. This is alarming when you consider that more than half of the species that live on land dwell in forests. The second was that this trend did not consistently correlate with changes in forest area, and in fact changes in wildlife population sizes only correlated with forest area change in a minority of cases.

This underlines the risk of “empty forests” by highlighting that forest wildlife can be lost even while we address deforestation because of a mixture of different factors all acting at once, including over-exploitation of wildlife, for example. On the other hand, we also found that forest wildlife populations can and are recovering in places and that a multi-pronged strategy across these factors was needed.

Our experience in producing this research and the findings remind us of three important lessons:

1. Ending deforestation and expanding tree cover are essential but not enough. Equally, setting our goals and measuring our progress on forest cover is not enough. We risk unintended consequences and being left with unhealthy and unresilient forests. We must complement ‘quantity’ targets with ‘quality’ targets and measure changes in biodiversity directly.

The Forest Specialist Index put forward through Below the Canopy is one such means to do so. Since our publication, this index has been included in the draft monitoring framework for the new global biodiversity agreement.

This is very welcome and a step forward. However, its positioning within the target on the use of wild species misses the more strategic role it can play in qualifying our progress in halting and reversing the loss of forest area. It also misunderstands the fact that the decline in forest wildlife is caused by multiple different drivers. Aligning this indicator on the targets relating to the protection and restoration of habitat would be of greater value.

2. We are not measuring forest wildlife populations enough. To conduct this research we trawled published research for data that spanned multiple years on the same site in order to be able to plot a trend. Data like this is surprisingly hard to come by. In some cases, surveys were done just once in a given site before researchers moved on, making it impossible to understand changes over time.

If we are to gain a clearer picture of this decline but also the effectiveness of responses then researchers must be supported to reprioritize this effort. It is increasingly easy to do this as there are increasingly efficient and accurate means to survey for species, from acoustic monitoring to identifying DNA left behind in water.

It would be wise for public and private donors who invest in forest as a valuable Nature Based Solution to climate change to not only monitor carbon directly but to also require long-term biodiversity monitoring and ensure their asset is resilient in the long-term.

3. We need to redress our imbalanced relationship with forests and nature. Through our food production, burning of fossil fuels, infrastructure development and more, we are tipping forest ecosystems out of balance. Evolved over millions of years, forests are finely tuned and megadiverse ecosystems, and as we disrupt these we expose ourselves to risks.

The aforementioned feedback loop between forest biodiversity loss and climate change is one such risk, and our probable proximity to a tipping point in the burning and shrinking Amazon is perhaps the best example. Another is our exposure to emerging infectious diseases. Although the exact source of COVID-19 remains unclear, it has long been known that the majority of emerging infectious diseases are from animals, with over 70% of those from wildlife.

The underlying factors of this decline in forest wildlife populations, including over-exploitation, deforestation and fragmentation of forests, are also linked to increased risks from emerging infectious diseases.

We can only manage what we measure. Let’s measure forest biodiversity better. And manage forests better for our health, and theirs.

Will Baldwin-Cantello is Global Forest Practice Lead for WWF.