DAVAO, Philippines – On August 4, 2018, a fisherman found an endangered green turtle (Chelonia mydas) floating weakly in the Davao Gulf, a diverse marine ecosystem and rich fishing ground spanning 308,000 hectares in the southern Mindanao region. The fisherman brought the stranded juvenile female green turtle ashore where it breathed more easily after a plastic food wrapper was removed from its mouth.

Wildlife experts from Davao Oriental attempted to release the turtle back to the sea, but it just kept on floating, so they decided to keep it for further rehabilitation. The turtle, which measured about 24 inches in length and weighed 20 kilograms, was nursed in captivity but died after 11 days. The cause of death, upon necropsy, was a large amount of plastic waste found in the turtle’s stomach.

“Over the years, at least 10 endangered sea turtles were found separately in our waters and died due to ingestion of plastic wastes,” Mayor Justina Yu said. The 79-year-old local chief executive from the municipality of San Isidro, one of the towns along the gulf, declared a war on plastic waste.

Marine animals like turtles and fish “mistake plastics for food” says Yu, adding that this, in turn, could bring health problems to humans who consumed those catches. Yu’s drive propelled the town to officially sign up with the Plastic Smart Cities program initiated by the World Wide Fund for Nature (WWF). By signing up for the campaign, San Isidro committed to eliminating plastic pollution by 2030. 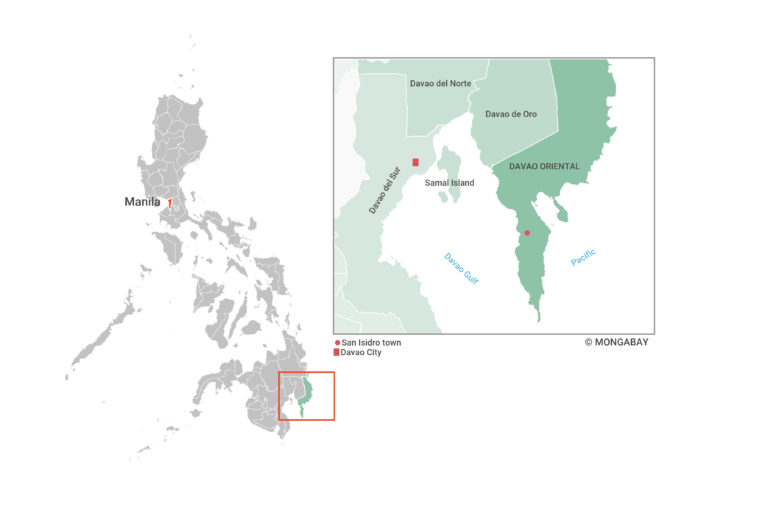 The anti-plastic campaign was also an attempt to protect Mt. Hamiguitan, a wildlife sanctuary that was designated a UNESCO world heritage site, the 34th ASEAN Heritage Park. The mountain is one of the last strongholds of the critically-endangered Philippine eagle (Pithecophaga jefferyi) and other threatened species in Mindanao.

The sanctuary, a favorite among climbers, tends to be littered with plastic waste abandoned by visitors. The local government is planning an education program that explains that tourists need to carry down their plastic trash, otherwise both they and their guides could be fined.

To jumpstart the war on plastic waste, San Isidro pledged to develop an action plan within the next six-months to pilot a project that will reduce plastic pollution by 30% within two years. It plans to achieve that by continuing to pay community members to collect plastic garbage, and recycling it into “eco-bricks” that will be used for local construction projects.

Plastic waste, with its threats to the town’s marine and terrestrial wildlife, has been tagged as a major environmental priority. “Time is running out,” Yu said. “We need to act fast and show to our children that we should avoid using plastic that can kill our marine environment and poses danger to our health.”

The majority of the plastic waste that piles up on the coastline of San Isidro (population 36,000 people), was not dumped by the locals but washed ashore from neighboring areas, including Davao City, Mindanao’s major economic hub. “It is sad to note that our seas have become a large garbage site,” Jose dela Cruz, a municipal agriculture technologist involved in the program, tells Mongabay.

To clean up their beaches, San Isidro engaged the most marginalized sectors from seven coastal villages to collect the plastic wastes under the program. Twice a month, local government workers go to the participating villages and weigh the trash collected by the parents and their children. For pieces of cellophane, they are paid 3 pesos per kilo and a peso and fifty cents per kilo for plastics and empty bottles.

The program also encouraged families – especially children – to save money. Under the program, a child from each family is encouraged to save some proceeds from selling trash and keep it in a coin bank. The child with the biggest savings would be given an award during the foundation day of the town on June 18.

Owing to the positive response from the villagers, the program has been replicated by more than 20 public elementary and high schools in the town. “We are actually hitting two birds with one stone,” dela Cruz says. “[We are] cleaning the coastal environment and instilling a culture of saving money [in] our children.”

Plastic pollution in the Philippines has been a major problem that chokes its seas. An archipelagic nation of over 7,000 islands, the Philippines was tagged as one of the world’s worst ocean plastic polluters after China and Indonesia. Globally, 396 million metric tons (MT) of plastics were produced in 2016. Of this figure, at least a third, or 100 million MT, became land or marine pollution, and if things continue as is, there will be more plastics than fish in the ocean by 2050, the WWF said.

This fact propelled the desire to protect the seas and the marine life that depends on the seas, especially in vital areas like the Davao Gulf, a top fishing ground in the country that is host to numerous small and large pelagic species.

The gulf is also a “critical resource” that supports six coastal cities and 18 coastal municipalities. “It provides livelihoods to thousands of people in the region,” says Yu. “That’s why there should be a collective effort to protect it from plastic pollution.”

Inspired by similar initiatives in the region, San Isidro joined the anti-plastic campaign after the Island Garden City of Samal prioritized garbage reduction under the WWF’s global No Plastics in Nature initiative. The other town active in the waste drive is Donsol on the main island of Luzon, a site famous for its butanding or whale shark sight-seeing boat tours.

Twelve other cities and tourism destinations in Thailand, Vietnam, Norway, the Netherlands, France and Turkey have also improved waste collection, recycling, landfill management, and reduction of plastic waste. In the Philippines, at least 20 cities have implemented bans or limited the use of plastic bags.

Samal Island, three hours away by vehicle from San Isidro and a mere 10 minutes away by boat from Davao City, is a popular tourist spot known for its white sand beaches and the Monfort Bat Sanctuary, the Guinness world record holder for the largest single colony of fruit-eating bats.

“We are an obscure town but we are trying our best to protect Mother Earth,” Yu said. “We will continue to do this to help prevent the bastardization of our ocean.”

Banner image of a large green turtle (Chelonia mydas) with suckerfish latched onto its shell while swimming on a tropical coral reef in the Philippines. Green turtles are among the marine species threatened by marine plastic waste. Image by Simon J. Pierce/Coral Reef Image Bank