A final effort to find Miss Waldron’s red colobus is under way in the forests of southeastern Côte d’Ivoire. Should it fail, this monkey will next year become the first primate to be formally declared extinct in over 100 years.

Hope of avoiding this tragic landmark is faint. The last recorded sighting of Miss Waldron’s (Piliocolobus badius waldroni) by scientists was in 1978. But in the late 1990s, hunters told researchers that black and red monkeys could still be found in the forests around the Tanoé-Ehy lagoon in southeastern Côte d’Ivoire.

Scott McGraw, a professor of primate anthropology at Ohio State University, surveyed this swampy forest in the southeast corner of Côte d’Ivoire in 2000 and 2001. While his team didn’t observe their quarry directly, they were presented with a monkey’s tail by a hunter that DNA testing suggested was Miss Waldron’s. Soon afterwards, they were sent a photograph of what was almost certainly a freshly killed waldroni.

And in 2008, hunters in Ivory Coast reported hearing the monkeys’ distinctive call in the forest near the Ehy lagoon.

“We intensified the search,” said primate conservation biologist Inza Koné, chair of the African Primatological Society. “We set up camera traps and we have organised the community to search for Miss Waldron’s by providing them with pictures.”

So far, they have found nothing. 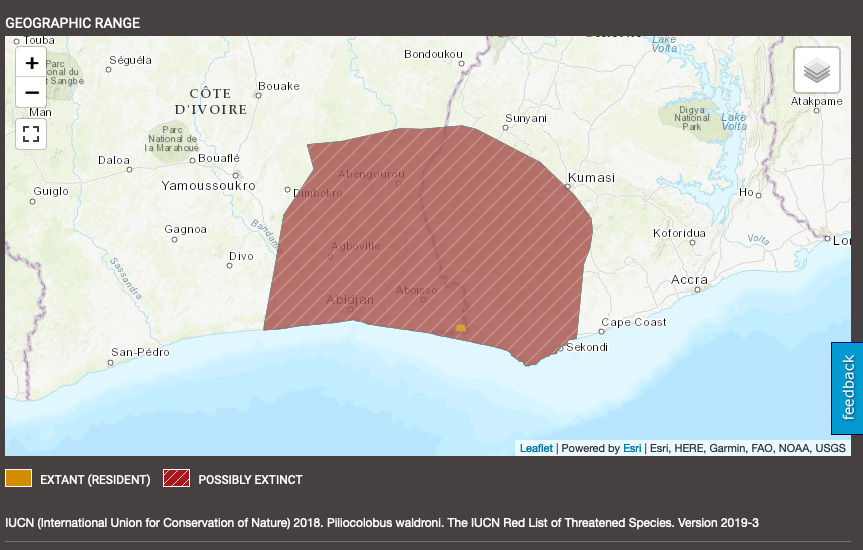 Monkeys with no thumbs

Red colobus monkeys (Piliocolobus spp.) are a group of leaf-eating monkeys found across Africa’s forested belt, from Senegal in the west to Tanzania in the east. They come in a wide range of colours and sizes; facial patterns, behavior, and vocalizations and they have only a stump of a thumb, relying on four fingers to move nimbly through forest canopy.

Piliocolobus mostly eat leaves, which are hard to digest, and these monkeys have four chambered stomachs similar to cows that allow them to process this diet. This unfortunately means they spend a lot of time sitting still, full and digesting — easy prey for humans and chimpanzees.

As seed dispersers, red colobus play an important role in maintaining the health of the forests they live in. Their range also overlaps with roughly three-quarters of other African primates, meaning that effective protection for Piliocolobus simultaneously helps protect many other species.

Red colobus monkeys, says Koné, are particularly vulnerable to disturbance. “When they get stressed, they die. When their habitat is disturbed, they don’t reproduce and they are driven to stress-extinction,” he told Mongabay.

All 18 red colobus species are severely threatened by hunting and massive loss of habitat, as forests are fragmented by roads, and cut down for mining and logging, large plantations and smallholder farms.

Miss Waldron’s is no exception. Information about its historical range is limited, but it’s believed to have been restricted to an area covering southeastern Côte d’Ivoire and western Ghana. Forests here have largely been cut down to make way for oil palm plantations and smallholder agriculture. Monkeys of all kinds, including threatened Roloway monkeys (Cercopithecus diana roloway), are also heavily hunted for food in this region.

A final push to record Miss Waldron’s red colobus began in September and will continue until February or March 2020. Camera traps will attempt to spot the monkey in the areas where several independent sources have reported seeing it.

If this fails, a formal announcement of extinction will be made next December. Even if it succeeds, researchers say they’ll find only a remnant population, too small to be viable.

“The red colobus is the most endangered group [of primates]. It is precious and worth saving. If we are going to save them we need to do something. Some of them are on the brink of extinction,” said McGraw.

To try to prevent other red colobus monkeys from following Miss Waldron’s out of existence, primatologists, researchers and wildlife conservationists have set up a web portal to allow them to easily share news, progress reports, ideas and questions.

It’s part of the Red Colobus Action Plan (ReCAP), adopted in 2018, which aims to expand and strengthen conservation for Piliocolobus; raise the monkeys’ profile in the areas where they live and beyond; build research and conservation capacity through training and mentoring; and develop continent-wide initiatives to link activities.

A monitoring tool is also being designed to make it easier to see where policies and actions are succeeding or failing, which regions or taxa need greater attention, and evaluate outreach and education or anti-poaching initiatives.

Teams have been tasked to advise the Red Colobus Working Group on specific topics, such as local education, genetics, surveys and baseline data. In support of ReCAP’s overall aims, the working group has outlined a list of key activities and the approximate cost of each so it is easier to raise funds in a coordinated way.

While Koné hopes Miss Waldron’s will be spotted in Côte d’Ivoire between now and December 2020, he concedes the species’ fate is sealed. ”Even if we found some, it will not be a viable population. It cannot reproduce. It will be functionally extinct.”

But it is not too late for other species of red colobus. Through better monitoring, enforcement of protected areas, and education, as well as regional coordination that can maximise conservation efforts, there is still hope.

“The disappearance of Miss Waldron’s red colobus is a sign of a wave of extinction of animals that can only live in forests,” said McGraw. “How many of them will go? At what point will we care? It is going to be a cascade. It is the beginning of a series of extinctions of animals.”