Seven men have been charged in connection with a large-scale illegal logging operation just north of Mozambique’s Zinave National Park after a zebra poacher who was supplying them with meat was himself arrested.

Four large logging trucks, five tractors, two front-end loaders, six other vehicles, and a variety of logging equipment were confiscated in October, along with cash, cellphones and other personal belongings. The illegal loggers are facing hefty fines and possible jail sentences.

In the 1970s and ’80s, during Mozambique’s civil war, much of the Southern African country’s wildlife was decimated as government soldiers and rebel fighters alike shot animals for food.

In 2015, an article in the South African weekly Mail & Guardian warned that Mozambique would be stripped of its remaining forests in “just a few years.”

The article said many Mozambicans were illegally logging for Chinese companies and that the country had become China’s biggest wood supplier on the African continent.

Almost 25 percent of the country has now been designated as conservation space, with better controls in place, said Antony Alexander, the senior project manager in Mozambique for the Peace Parks Foundation.

The foundation aims to preserve and restore large functional ecosystems by establishing and developing trans-frontier conservation areas across Southern Africa. Alongside the Mozambique government, the foundation has co-managed Zinave National Park since 2015, integrating the park into the Great Limpopo TFCA.

Alexander, who has worked in conservation in Mozambique for the past 10 years, said the recent introduction of new conservation laws, followed by extensive training of prosecutors and judges, was helping, with swift and heavier sentences for poaching and illegal logging.

Last year, a report by China-Lusophone Brief, an intelligence unit that provides business decision-makers with an understanding of the economic environment in Portuguese-speaking countries, said Mozambique had substantially tightened its forestry regulations, particularly in environmentally sensitive areas. This was to ensure the country benefited from its natural resources as much as possible by boosting tax collection.

The report said illegal loggers working for Jambo had been caught in the Gorongosa district on Nov. 21, 2018, with 20 logs of protected leadwood.

Jambo attempted to bribe his way out of arrest and prosecution. After this failed, he threatened wardens with a pistol, which turned out to be unregistered.

If Jambo’s conviction signals the government’s commitment to curtailing illegal logging, the arrests in Coutada 4 that same month show there is still much to be done.

Alexander said the devastating impact of illegal logging in Mozambique should not be underestimated.

“With time you find that some species of trees become completely regionally extinct. And being hardwood, these trees are extremely slow growing, competing in a landscape with increased bush and grasses, which combined with increased fires, poses a threat to the growth of younger trees,” he told Mongabay. “This has a knock-on effect, impacting on a wide variety of animals and species critical to biodiversity, including many keystone species like vultures and ground hornbill which need large trees for nesting.”

He said because Mozambique is such a large and rural country, it is difficult to control illegal logging.

“Loggers are known to pay a local community chief and community labour relatively paltry sums of money to support the illegal logging operation, including the supply of chainsaws to cut down the trees,” Alexander said.
Tractors and chains are then used to move the logs to collection points, followed by operators who come with front-end loaders and trucks to collect the logs.

“Ultimately, people in the rural communities who have never seen money and don’t know the real value of the trees are left with nothing,” Alexander said. “Essentially we have these people coming in, plundering the resources and leaving no value behind.”

Bernard van Lente, the Peace Parks Foundation’s project manager in Zinave, said the main tree species targeted on the boundary of the park included shamfuti or pod mahogany (Afzelia quanzensis), tamboti (Spirostachys africana), and mopane (Colophospermum mopane). Also targeted are small false mopane (Guibourtia conjugata), the most commonly logged tree in the area, and leadwood (Combretum imberbe), a very slow-growing tree that can live for a thousand years and which yields some of the hardest timber in the world.

Alexander said illegal logging was highly lucrative and was supported by powerful individuals with vested interests, as appears to be the case with the large-scale logging operations near Zinave. 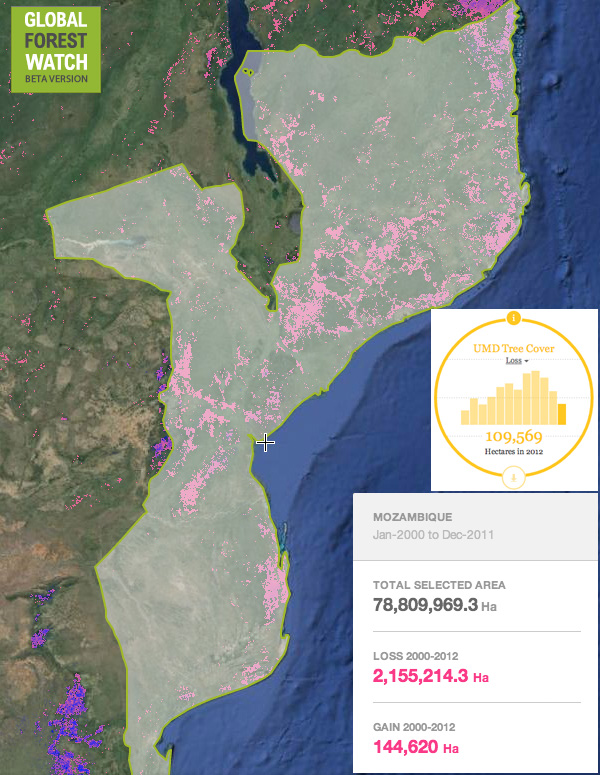 From 2001 to 2018, Mozambique lost 3.05Mha of tree cover. Click image for more information about Mozambique’s forests from Global Forest Watch

Zinave was originally declared a protected area five years before Mozambique’s civil war broke out in 1977, but the war wiped out most wildlife in the area.

With the return of peace and efforts to re-establish the park, small surviving pockets of wildlife started to slowly recover. Since the Peace Parks Foundation signed a co-management agreement with the Mozambican authorities, more than 2,000 animals, including elephants, buffalo, giraffes and ostriches, as well as impala, wildebeest, sable and reedbuck, have been reintroduced into a fenced-off sanctuary area covering 18,500 hectares (45,700 acres) within the 480,000–hectare (1.19-million-acre) park.

Infrastructure has been redeveloped, staff capacity improved, and counter-poaching initiatives implemented, with rangers being trained and equipped with monitoring and tracking systems.

Anti-poaching operations were further boosted with the delivery of 50 heavy-duty bicycles for patrols in a region that has few roads.

A 6×6 Samil crane truck and a number of 4×4 vehicles and motorbikes have also been acquired to aid park maintenance and operations. There is even aerial surveillance, thanks to the acquisition of a light sport aircraft, which has proved critical to monitoring logging along the park’s boundaries.

With increased patrols, rangers were able to monitor what was happening more effectively and the logging was “quite quickly stopped,” Alexander said.

Alexander said the tip-off from the zebra poacher last month coincided with reports from rangers who had heard what sounded like chainsaws in Mozambique’s Coutada 4, a hunting concession just north of Zinave’s northern edge.

“We immediately realised the sensitivity of this, and did our own reconnaissance. Bernard [van Lente] was involved in the recce flights,” Alexander said. “After illegal logging activity was spotted, Bernard got a few photographs. We passed on all the evidence to ANAC [the National Administration for Conservation Areas], which took it to ministry level, and got approval for a joint security operation.”

Using a newly installed digital radio system for communication, the operation was coordinated from Zinave, involving ANAC, the Mozambique Environmental Quality Agency, and Zinave’s own rangers.

Assets were seized and a fine of $12,121 was assessed, payable on successful prosecution.

“Based on the laws of the country, the operators now have time to present evidence that they had the necessary permits, which they clearly did not have,” Alexander said. If convicted, they could face jail sentences and confiscation of assets.

Alexander declined to comment on who the illegal loggers might have been supplying the wood to. “The important thing, for now, is that we have shut it down.”

Commenting on the success of the operation, Carlos Lopes Pereira, director of protection and law enforcement at ANAC, said: “We are grateful for the support received from all the partners, as well as the National Criminal Investigation Service and police. It is only through these kinds of collaborative operations, and taking action, that we will secure the future of our forests.”

Fred Kockott is the founding director of Roving Reporters, a journalism training agency that focuses on environmental, social and justice issues.