On the front line of climate change in India’s Sundarbans

With the ocean swallowing up land in the world’s largest mangrove forest, humans and tigers are being squeezed into an ever-shrinking space, with deadly consequences. Words by Johan Augustin; Images by Jonas Gratzer. by Johan Augustin on 17 October 2019

SAGAR ISLAND, India — Saktipada Bhuinya looks out over the ocean that surrounds Sagar Island. The Indian part of the Sundarbans, the vast mangrove forest in the Bay of Bengal, consists of 102 islands, about half of them inhabited.

That may not be the case for much longer. The villagers have raised a tall barrier of mud and rocks, and farther out to sea the West Bengal state government has erected a white concrete structure to prevent the vigorous erosion. But these measures haven’t stopped the approaching water from carving away large chunks of land, year after year. Saktipada tells Mongabay that the sea level often rises above the barrier at high tide, the water rushing over his floors.

“I’ll give the house another year,” he says. After that, Saktipada and his family of six will have to move to a higher part of this mostly flat island, where they’ll stay under tarpaulin tents with other climate refugees.

“We have no money to buy new land. We’re poor people,” Saktipada says.

He’s not alone. Tens of thousands have already lost their homes in the Sundarbans. Each year it becomes harder for the 160,000 people living in Sagar Island’s 43 villages to resist the rising water. Cyclones and storms, which regularly pass through the Bay of Bengal, have become more frequent.

Five years ago, the high tide broke through all the barriers on the island’s eastern side, ruining thousands of houses and rendering farmland unusable through high salinity. Through centuries the tides have formed the Sundarbans; the islands vanish and reappear, in a natural rhythm. But over the last couple of decades the variations have become more extreme, and the pace of erosion here is considered to be the world’s highest.

The locals have tried to adapt. Those who farm have begun cultivating salt-resistant strains of rice. For others, overfishing has made for leaner catches, and the shrinking coastline threatens the tradition of sun-drying fish on the beaches.

Saktipada has fished all his life, but his son won’t carry on the tradition; like many young people from the Sundarbans, he’s moved to Kolkata for work. “They don’t want to stay here. There is no future in Sundarbans,” Saktipada says.

The situation on nearby Ghoramara Island is worse. The island had one of the first settlements in the delta, but thousands have been forced to move since more than half of the land area was lost. At a glance, Ghoramara appears to be a pristine paradise: no traffic congestion, as locals ride bicycles on winding paths next to ponds with diving ducks; lush forest all around; and goats and cows grazing. Yet all of this is at risk of disappearing due to climate change.

“The aggressive cyclones have an impact on the rice yield, and the salinity has increased by 50 percent on our fields,” says Shankar Kayal, one of the fewer than 5,000 residents still remaining. “I have enough land to support my family. But what happens when the sea rises further?”

He adds that government assistance for relocation to other islands reaches few residents. “There are just too many villagers in need of financial support.”

A child plays next to a tree uprooted by coastal erosion on Sagar Island in the Indian Sundarbans. Image by Jonas Gratzer for Mongabay.

Sekh Mogammal is visiting his parents on Ghoramara. Like his older brother before him, he left the island for Kolkata, where he works as a tailor. The money the brothers make goes to support their parents back home. They need it. A cyclone whipped through just days before Sekh’s visit, with winds of 100 kilometers an hour (60 miles per hour). A barrier of massive boulders held together with thick nets runs along the shoreline. It’s expected to protect the island for another decade or so, but for Sekh’s family it’s not enough. “The salinity in the soil will soon make it hard to grow anything. Everyone will have to move from here,” he tells Mongabay.

Farther east, toward the border with Bangladesh, the changing climate has exacerbated another deadly threat. In this easternmost part of the Indian Sundarbans, an unknown number of Bengal tigers still roam the mangroves. (A census is underway, with a few hundred of the big cats believed to live on either side of the border.)

The tigers’ ancient hunting grounds have vanished with the advancing water, and the animals, which are excellent swimmers, have been reported crossing rivers and channels in higher numbers, drawn to human settlements by livestock. At the same time, villagers are forced deeper and deeper into the forest in search of a livelihood as the saltwater turns their farmland sterile. They look for honey and for crabs, and in doing so face an ever-increasing risk of encountering a tiger.

Sunita Mondol lives in the village of Anpur. She’s a living tale of what tiger conflicts mean in reality. Across the Gomti River from her home lies vast wilderness, stretching as far as the eye can see. The forest department has erected a fence several meters high along the mangroves and clad the riverbanks with nets. These are temporary solutions to prevent tigers from swimming across the river and into the village.

Three years ago, Sunita’s husband, Paresh, ventured into the forest with two friends to fish for crabs. A tiger leaped into the low-lying boat that the men were fishing from, and killed Paresh. Since the incident, the couple’s son, Atin, 26, has been the family’s breadwinner; he pulls a rickshaw in the village.

The attack didn’t just leave Sunita bereft of her husband. It also made her an outcast in a society where being a “tiger widow” carries its own stigma. It’s said that a person attacked by a tiger has invoked the wrath of Bonobibi, the guardian spirit of the forest. The widows are sometimes called swami-khego: those who eat their own husbands. Sunita used to be popular in the village, where she would socialize with neighbors. Now she’s lost her circle of friends, she tells Mongabay.

“When my husband was still alive, people would come for tea. Nobody comes anymore,” she says. “I am completely empty inside.”

Sunita Mondol and her son, Atin. Her husband, Paresh, was killed by a tiger during a fishing trip deep in the Sundarbans mangroves. Image by Jonas Gratzer for Mongabay.

It’s estimated there are hundreds of tiger widows, or bagh-bidhobas, in the villages throughout the Sundarbans. Atin wants the family to move to Kolkata. Sunita agrees; life in the swamps has become too harsh.

“The tiger attacks increase. They need more food and have lost all respect for humans,” Atin says.

The relentlessly encroaching sea has also driven saltwater crocodiles, venomous snakes and even sharks closer to human settlements. Atin says his brother-in-law died and his sister was in a coma for several days after being bitten by a cobra.

Life insurance coverage from the state is available for tiger widows, but it only applies within the regulated fishing areas in the buffer zones, and not in the core areas of the Sundarbans National Park and Tiger Reserve. And since fishing is more profitable in the more remote areas deep within the mangrove forest, most fishermen aren’t covered. The West Bengal government prohibits fishing in the core areas of the park and reserve, and permits it in the buffer zones, but only with a license — something most fishermen lack because of the cost.

Tourism activities associated with the reserve have further restricted the area in which fishing is allowed. That’s left the tiger widows, already socially ostracized, increasingly reliant on NGOs for financial support, or else forced to fish or gather honey deep in the mangroves — leaving them vulnerable to the same fate as their husbands.

Aparajita Mondol lives in the nearby village of Rajat Jubilee. She became a tiger widow a few months ago when her husband, Ravi, and two other fishermen set off for what was meant to be an eight-day fishing trip. Early on the second morning, as Ravi prepared breakfast, a tiger jumped from a sandbank onto the boat. In the commotion, Ravi and the tiger fell into the river. The other fishermen splashed the water with their oars to scare off the tiger, but by then Ravi had sustained fatal wounds to his throat and the back of his head.

“I found out around 10 o’clock, and went down to the jetty and waited for his body to arrive,” Aparajita tells Mongabay. 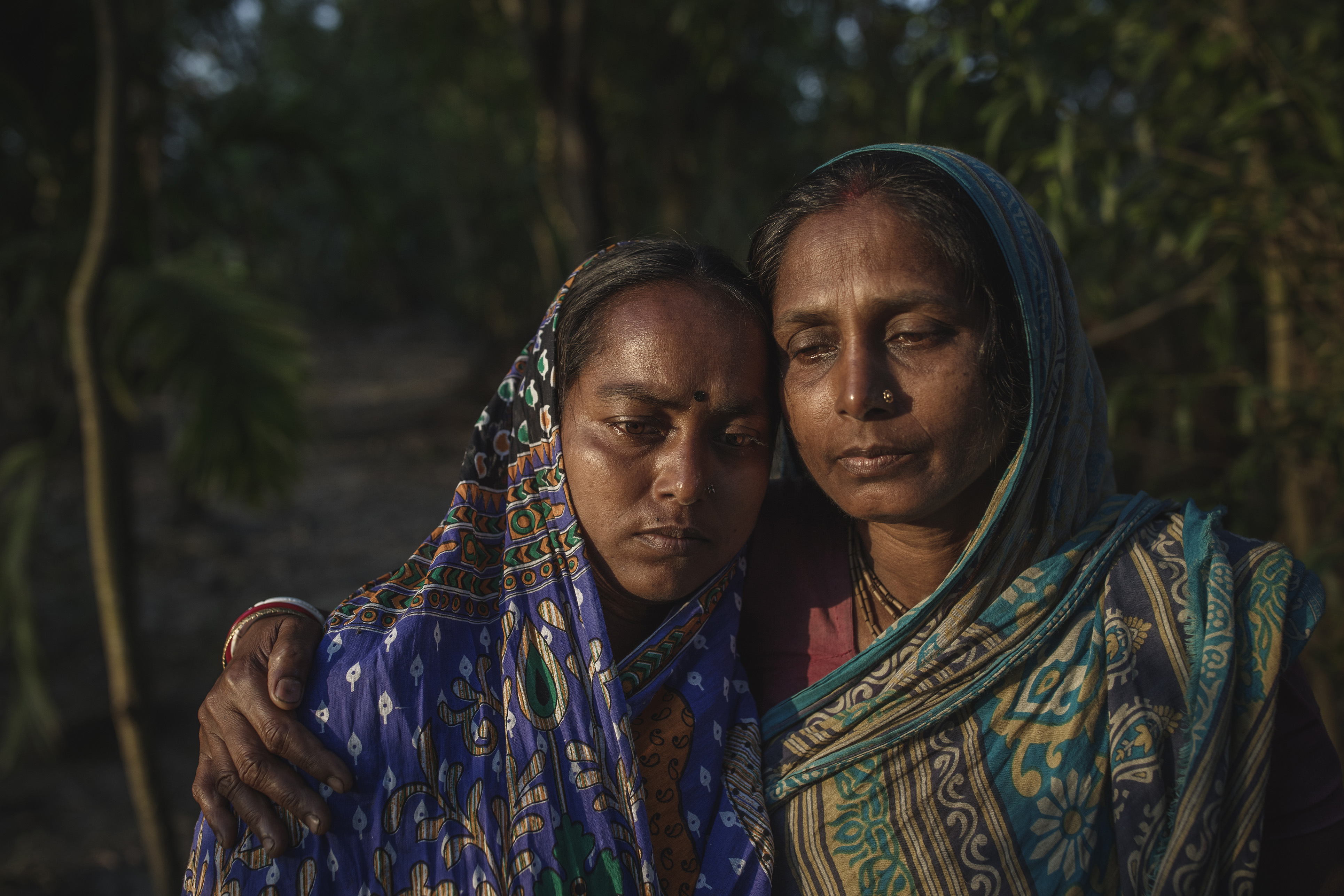 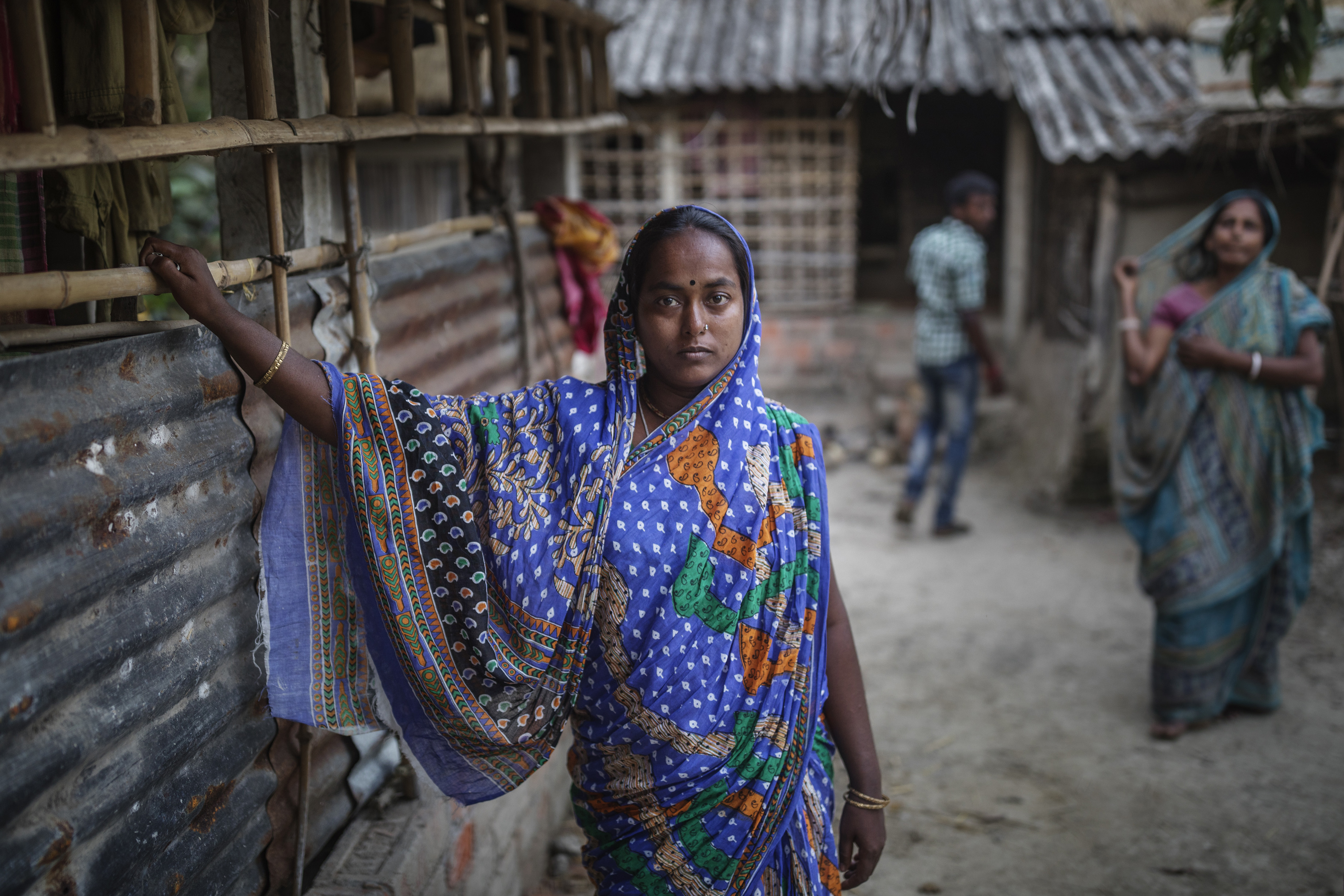 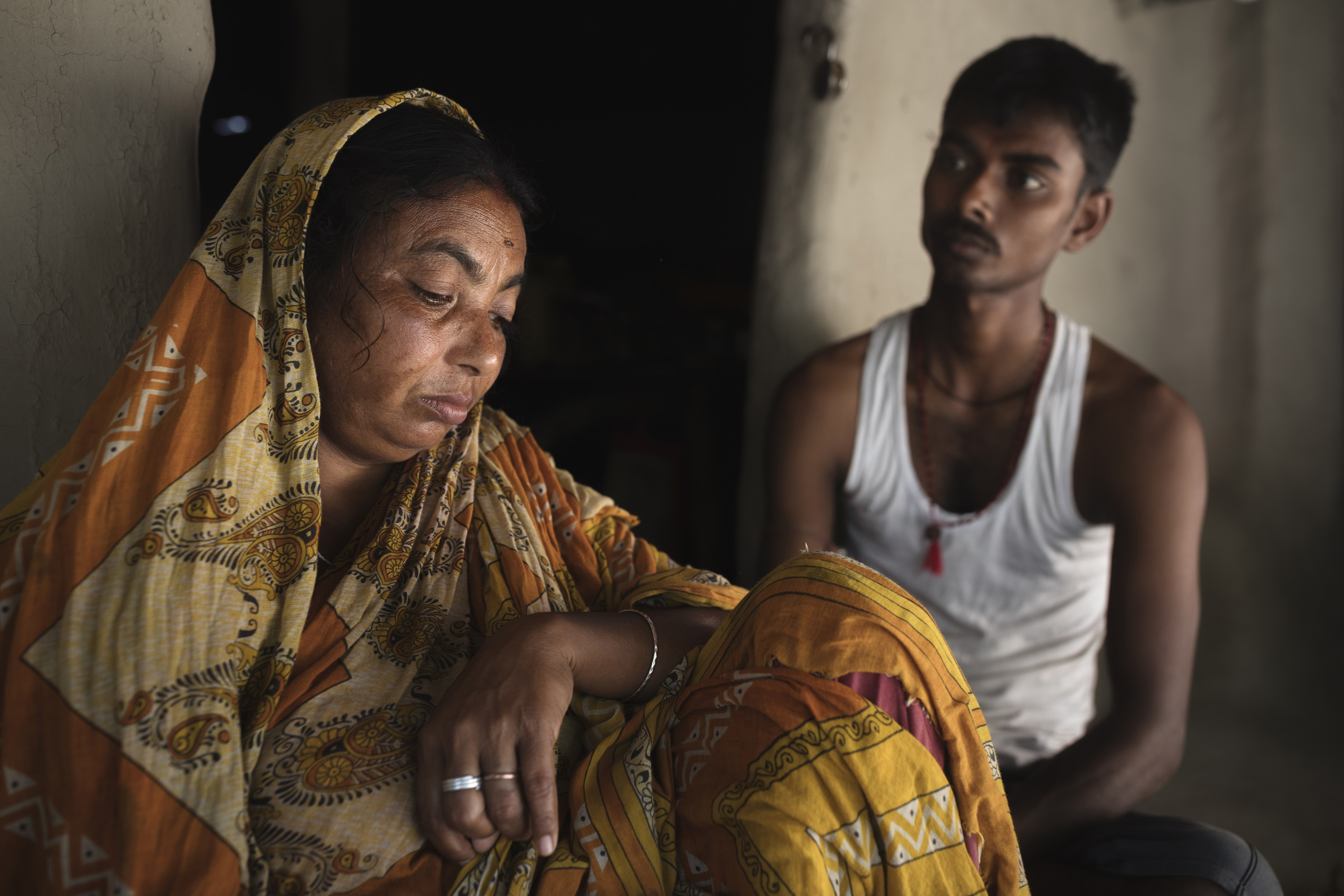 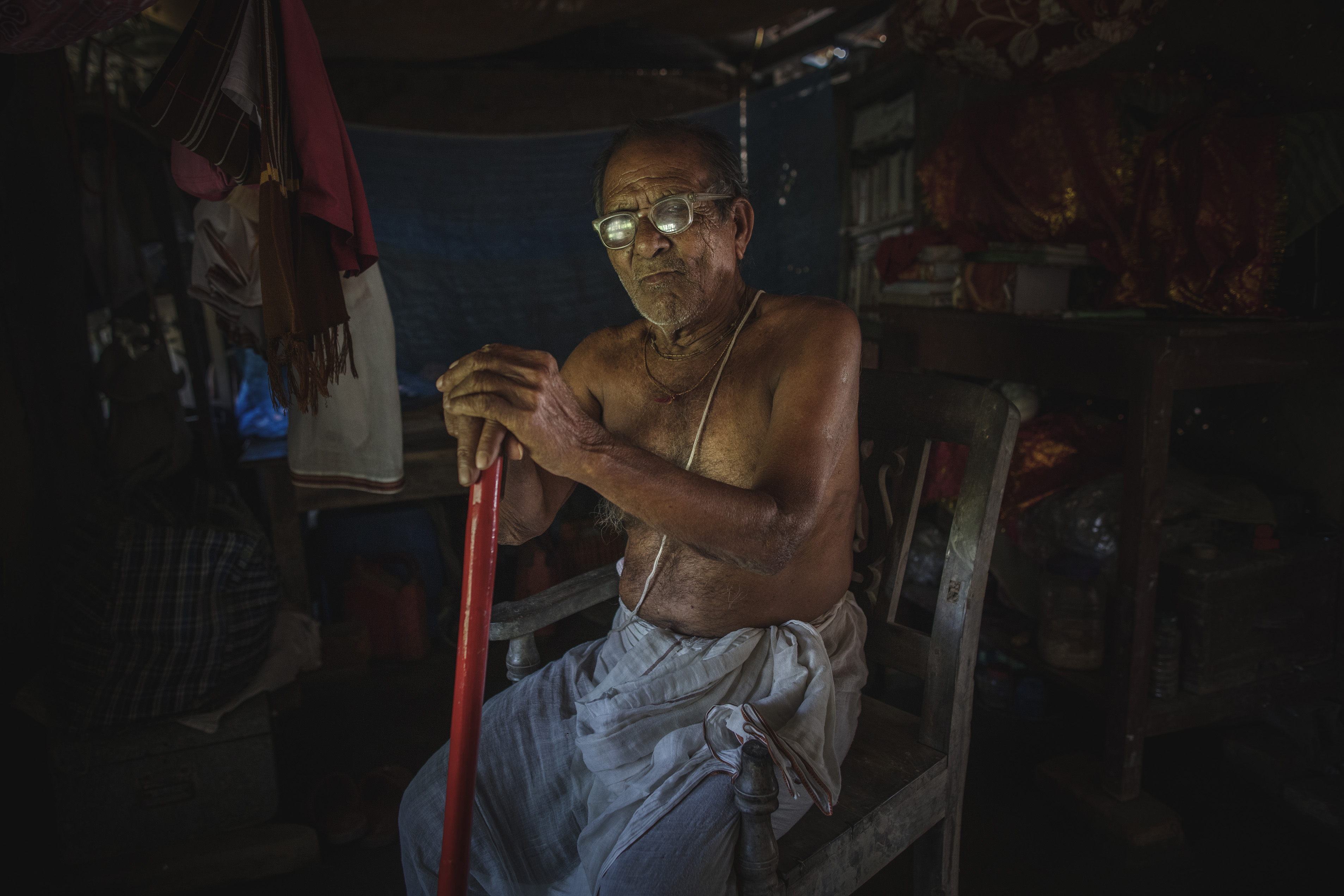 Aparajita has two daughters, 16 and 18, both of whom are married and live with their husbands. Aparajita has moved in with her parents, who support her both financially and mentally. Her gaze is empty as she stares at the clay floor of her parents’ home.

“She has stopped talking,” says her mother, Anima Barkandaj. “Traumatized.”

Ravi was covered by insurance, so the family is entitled to about $1,500. The money will sustain them for some time, but not for long.

“I’ve never fished in the river or in the forest, but now I may have to,” Aparajita tells Mongabay. “I need to make money.”

Anima shakes her head. “The tigers have become completely unafraid of people. They see people on boats and jump at them,” she says.

But the family has neither savings nor fishing gear, and relies on a tiny patch of land to grow food.

“We live day by day. It’s all about making sure that the family is getting by,” Anima says.

In an experiment to deter tigers from attacking people, fishermen and honey collectors have donned face masks on the back of their heads to trick the cats, which often lunge at their prey from behind. Electric fencing has also been used against tigers entering villages. These measures worked initially, but not anymore, says Niranjan Raptan, a former poacher who now guides tour groups around the mangroves. He reckons the shortage of freshwater has forced the tigers to consume brackish water, whose salt is said to make the cats more aggressive.

“What we see is old tigers with worn-out teeth that become man-eaters,” he tells Mongabay. “Humans are easy prey. We don’t run or swim fast.”

About 20 people a year are killed in tiger attacks in the Indian Sundarbans, according to government statistics. But Niranjan suggests the official figure is only for those killed outside the national park, and that just as many may be killed inside the UNESCO World Heritage Site.

Niranjan says one way the government can address the immediate conflict between humans and tigers is to prohibit crab fishing, but concedes that it’s “very lucrative” for communities whose traditional livelihoods are fast disappearing.

That’s only a stop-gap measure, though. Satellite pictures show that the sea level has risen by an average 3 centimeters (1.2 inches) a year over the past two decades in the Sundarbans, well above the global average. During that period, four islands have completely disappeared, and 6,000 families have become climate refugees.

In the world’s largest mangrove forest, the tigers and snakes may pose the most immediate danger. But it’s the inevitability of a changing climate that threatens the very state of the Sundarbans and its inhabitants, both human and wildlife. 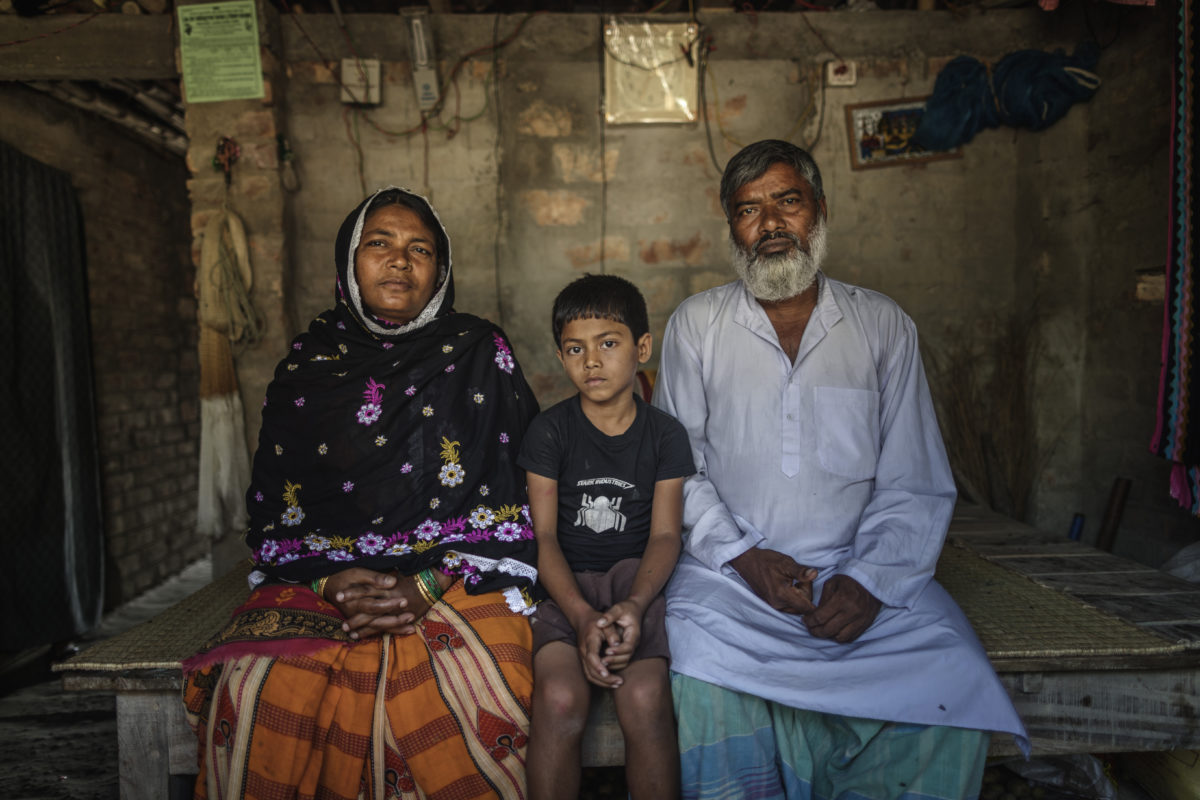 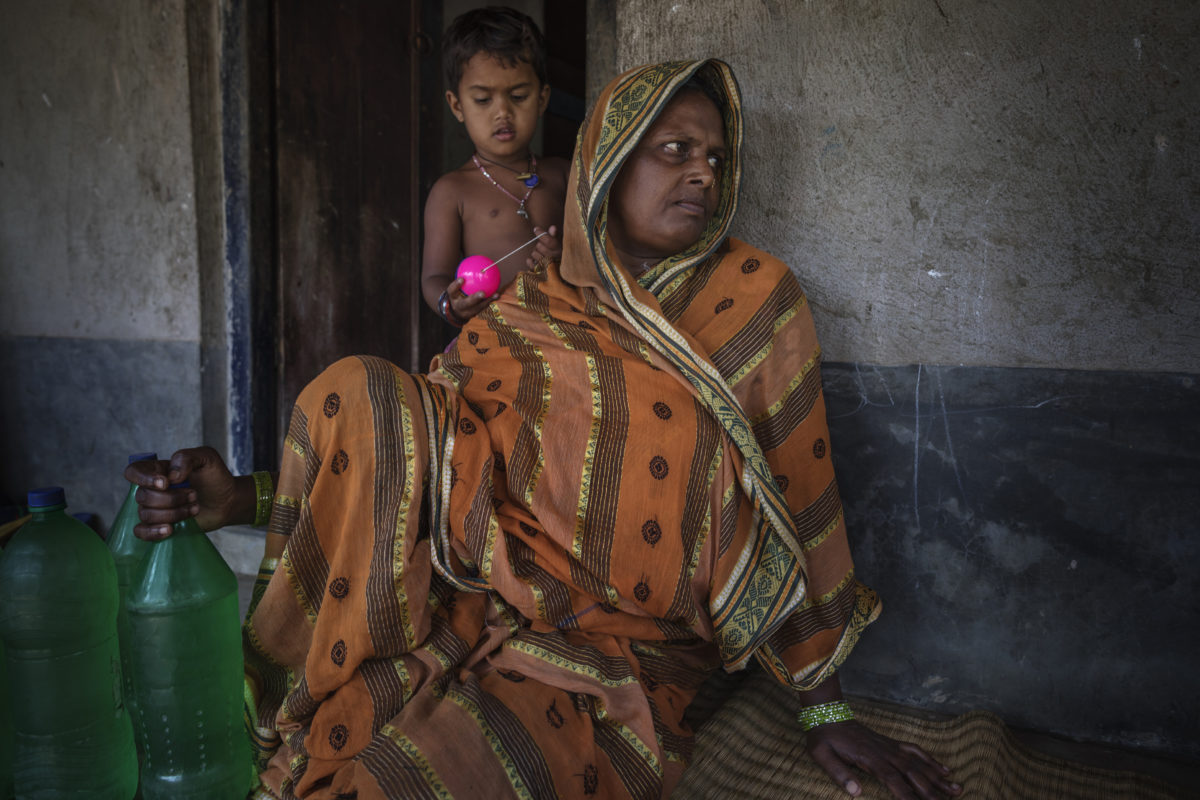 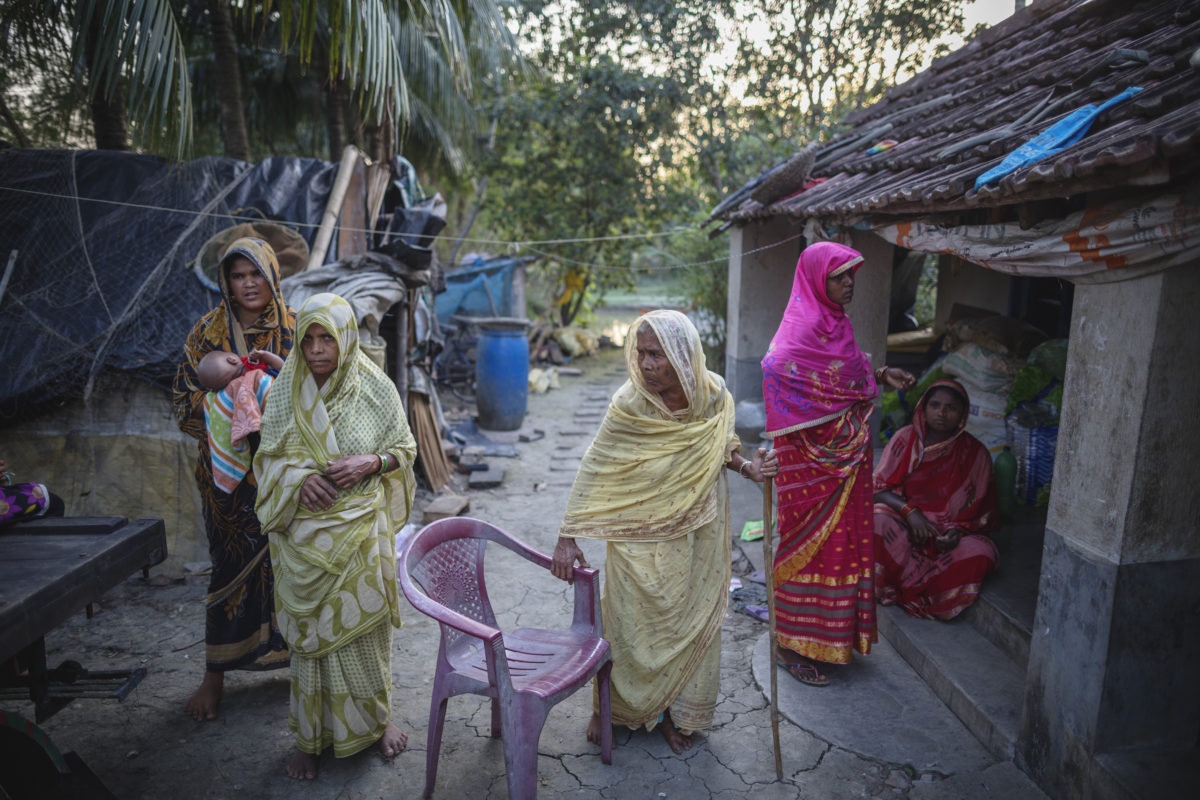 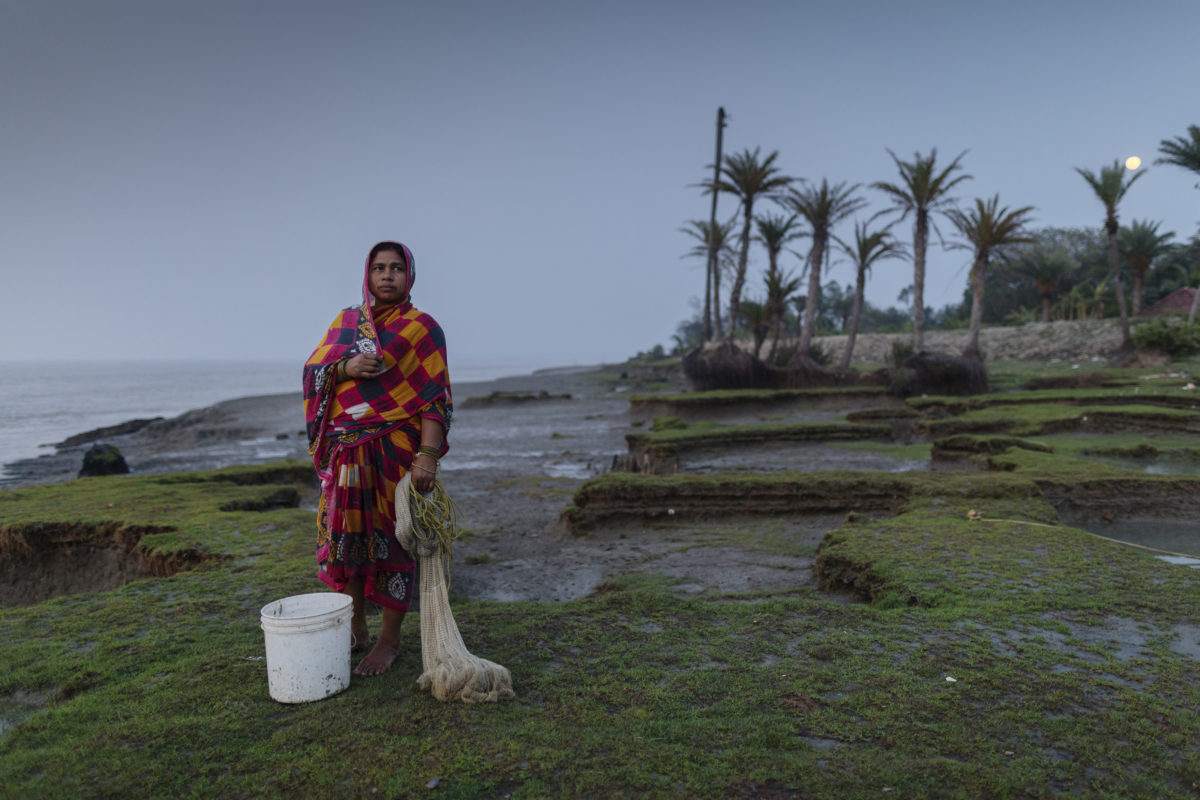 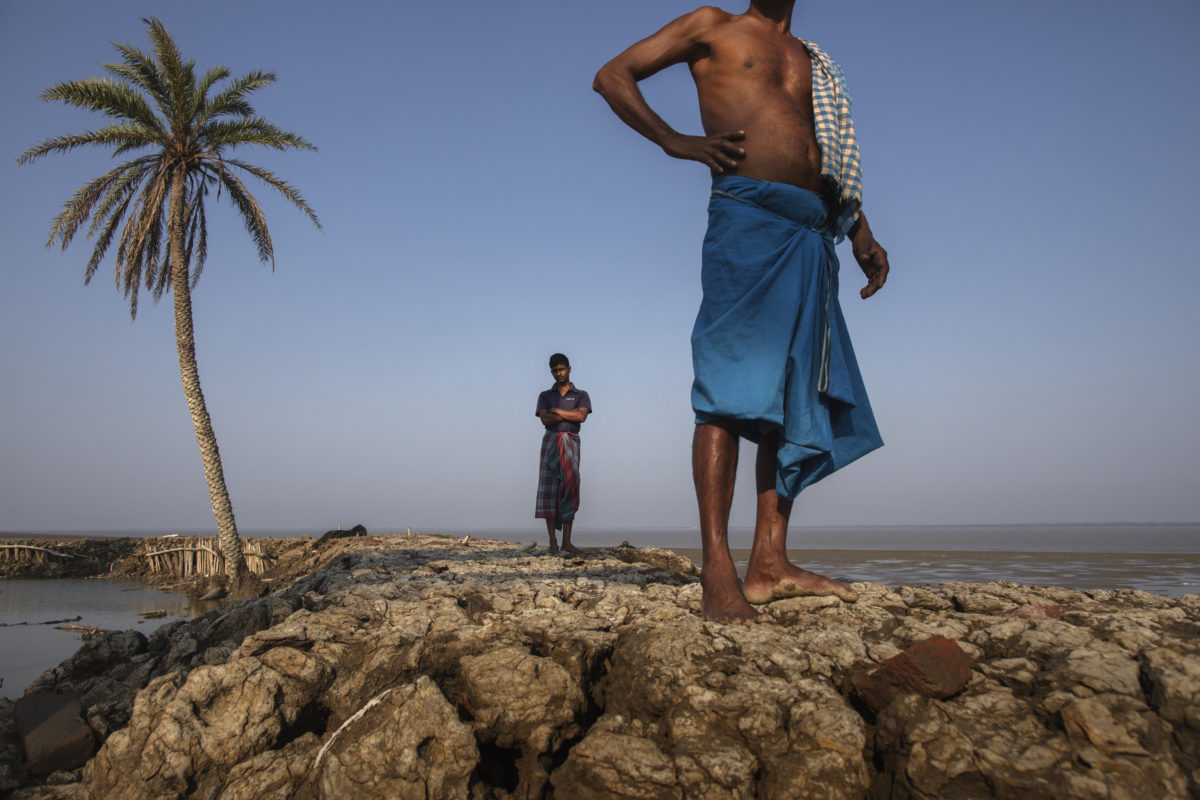 Banner image of a young boy looking out at the ocean in the Indian Sundarbans. When the high tide comes it will flood his home with seawater. Image by Jonas Gratzer for Mongabay.