Commentary by Juliano Assunção and Priscila Souza on 6 September 2018

Boosting agricultural productivity is key to solving one of the most critical issues of our time: meeting the growing demand for food and bioenergy while simultaneously protecting the environment.

With vast natural resources, including land and water, Brazil ranks as the fourth-largest agricultural producer in the world, according to the Food and Agriculture Organization of the United Nations (UN FAO). But the use of technology and the allocation of production resources in the country is far from efficient. As Brazil explores paths to raise agricultural production without increasing deforestation, it must address ways to improve rural credit.

Historically, in major agricultural countries, rural policies are complex and encompass areas such as credit, insurance, land rights, infrastructure, and research and development. But, in Brazil, rural credit plays a crucial role: it is the most important economic policy for agriculture. The amount available for rural credit for the 2017-2018 agricultural year was R$218 billion (US$57 billion). The provision of credit under this policy helps producers to finance upfront production costs, to administer cash flows, and to manage production and market risks. In fact, in the absence of a developed and functional insurance market to protect farmers from damages to their production and market fluctuations, farmers end up using rural credit to deal with these risks, leading to distortions in the allocation of resources.

While rural credit provides a major driver for agricultural production, it has not been sufficiently used to drive visionary change in the sector. In fact, credit to support low-carbon agriculture is not only limited, but under-used. Furthermore, siloed policymaking has failed to properly integrate credit with other relevant policies for the agricultural sector: mainly, the new Forest Code, which mandates the preservation of native vegetation on private lands. Providing better financing conditions for producers in compliance with the Forest Code would both help with environmental protection and provide a stronger justification for the public subsidies in rural credit.

This commentary summarizes the results of our in-depth analysis of the Brazilian rural credit policy. We’ve found that Brazil has an ample and complex set of funding sources and programs for rural credit and provides a range of lines directed to producers of different income levels and property sizes. However, flaws in the design of Brazil’s current system significantly reduce access to and distribution of rural credit. This diminishes the benefit of the policy and threatens Brazil’s ability to balance its agricultural productivity with its environmental conservation.

Challenges in rural credit: The role of distribution channels

We analyzed the paths through which resources flow to producers in Brazil and found that the current system’s structure creates a great amount of uncertainty and lack of clarity for producers who want to access credit.

Rural credit in Brazil is a highly decentralized activity, with a significant variety of funding sources and programs. Producers´ access to these sources and programs depends on the financial institutions that are established in their vicinity. In this scenario, the resources available to producers are often not closely associated with producers’ needs or with the agricultural potential of each region.

The figure below shows the concentration of Brazil’s bank branches and credit cooperatives in the Southern and Southeastern regions as well as the far-more-limited presence in the remaining areas of the country. The North and the Northeast, which are the less developed regions, have far fewer bank branches and cooperatives, reducing producers´ options and access to rural credit. 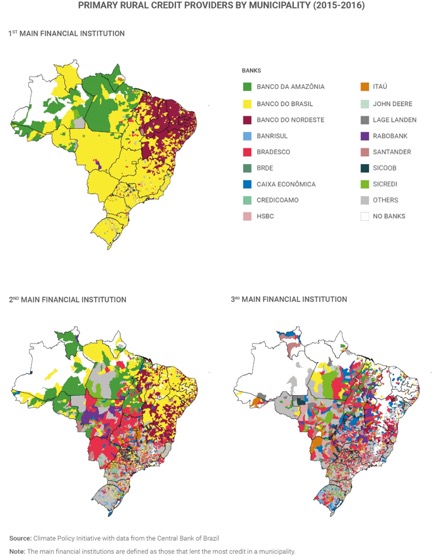 When considering the total amount of rural credit provided, lending is concentrated among relatively few financial institutions. Banco do Brasil, a public bank, provided 47 percent of all loans in the 2017-2018 agricultural year. Itaú and Bradesco, the two main private banks in Brazil, together with Banco do Brasil, provided around 60 percent of all loans in the same period. Credit cooperatives were together responsible for another 15 percent of rural credit in that year.

Because banks and cooperatives have access to different funding sources and lend at different conditions, the highly unbalanced geographic distribution of financial institutions in Brazilian regions implies that producers are subject to markedly different financing conditions. This means that the mix of credit options available to producers often stems from the system’s structure rather than the agricultural potential of each region.

In addition to the geographical variations in bank location, the amounts in each funding source and rural credit program usually fluctuate dramatically from year to year, affecting the total amount of resources available to each financial institution. The figure below shows the variation of the main sources from 2002 to 2016. This fluctuation of credit supply adds to producers´ uncertainty, since they do not know which resources will be available every year.

In the 2017-2018 agricultural year, the Brazilian rural credit system offered 18 funding sources and 12 programs. Those funding sources and programs each have important differences regarding eligible beneficiaries and financing conditions. This generates a complex system where it is hard for both the lender and borrower to pin down the best credit option in each case.

The complex set of rules in different credit lines is not only highly complicated for agents that operate the system, but also leads to distortions in resource allocation. As noted above, drastic changes in resource availability and rules from year to year increase producers´ uncertainty and complicate farmers’ production and investment decisions.

Some credit lines fund specific regions of the country. The Northern and Northeastern region, the two least economically developed areas of the country, have specific Constitutional Funds to foster local development. Despite being low compared with the national credit volume (1.3 percent and 2.6 percent for the 2017-2018 agricultural year, respectively), those funds are the primary funding source for most municipalities in the North and the Northeast. There is also a Constitutional Fund for the Midwestern region. However, it is not as important for the region’s municipalities when compared to the funds in the Northern and Northeastern. This evidence reinforces the observation that producers in richer parts of the country tend to have a wider range of credit lines to choose from compared with the least developed regions.

We also show that the fragmentation of rules for rural credit can distort access to the funds. The Constitutional Funds, which provide favorable conditions for municipalities in the Midwestern, Northern, and Northeastern regions, also define sub-regions (within those regions) that have differentiated conditions. It is common to find neighboring and similar municipalities subject to very different loan conditions.

The use of the farm size criteria for distributing rural credit generates another distortion. Some programs (including PRONAF, the most important program directed to family farming) have conditions based on the size of the property. However, the specific criterion used for this purpose is the number of fiscal modules in a property. The calculation of a fiscal module considers: (a) the prevalent type of agrarian land use in the municipality (fruit, vegetable, and animal production, permanent crop, temporary crop, livestock, or forestry); (b) the income obtained from the prevalent agrarian land use; (c) other existing types of production in the municipality that, although not predominant, are significant in terms of income or area used; and (d) the concept of “family ownership,” as defined by Brazilian law.

Fiscal modules were defined by the National Institute of Colonization and Land Reform (Instituto Nacional de Colonização e Reforma Agrária, or INCRA) in the 1980s with the objective of evaluating the agricultural potential of a municipality. However, the fiscal module of each municipality has never been updated, despite substantial productivity and technology changes in recent decades that vary in their impact across different regions.

The figure below shows the sizes of the fiscal modules for every Brazilian municipality. There are numerous cases of neighboring municipalities with very different fiscal module sizes. This leads to producers with similar properties being defined differently based solely on which side of the border their property falls on.

A highly fragmented policy may be more subject to political interference, since changes are often diluted in the overall system. The evolution of the farm revenue criteria for eligibility for some programs is suggestive. For example, PRONAMP, which is a program targeting medium-size producers, uses a farm revenue cutoff to determine its beneficiaries. However, there were significant changes to this limit in recent agricultural years. In the 2010-2011 to 2016-17 period, for instance, the maximum farm revenue for being considered a “medium-size” producer under PRONAMP raised drastically — from R$500,000 to R$1.76 million.

As an even more dramatic example, the definition of farm size for determining loan conditions in the Constitutional Funds has been subject to frequent and substantial changes. For instance, in 2010, the maximum revenue for a producer to be defined as medium was R$1.9 million, while in 2011 this limit changed to R$90 million! Although it is conceivable that the scope of policies can evolve over time, it is quite unlikely that the changes reported above have a counterpart in production.

Toward solutions in rural credit: Next steps for Brazil

The combination of the underdeveloped distribution channels and the fragmented rules generate a complex system. It is difficult for financial institutions and producers in Brazil to evaluate the credit options as well as understand the intricate and ever-changing rules. These characteristics make rural credit rules more susceptible to political interference, where arbitrary changes are made to satisfy interest groups to the detriment of efficient resource allocation.

The greater risk is that Brazil will lose a viable tool for achieving sustainable agricultural growth if it does not address these problems in its rural credit system. The main routes for policy reform are outlined below:

1. Reforming policy to improve transparency and simplifying the system could reduce credit access problems, facilitate a better allocation of resources, and improve the productivity of the rural sector in Brazil.

2. Enhancing the role of additional financial services, like insurance, in rural policy would also benefit producers. Insurance availability is limited in Brazil and producers end up using rural credit to mitigate risks.

3. An expansion of the private sector’s participation in the Brazilian rural economy could stimulate competition and innovation in the financial system, generating gains for the economy as a whole.

4. Better alignment of rural credit with the Forest Code, which regulates the sustainable use of land in the country, could strengthen the sector and help with forest preservation.

This research should give policymakers and agribusiness a better understanding of how to effectively shape public policies that contribute to the promotion of agricultural productivity. Rural credit, especially in Brazil, presents a powerful tool for increasing agriculture productivity. By acting quickly to simplify rural credit distribution channels and governing regulations, Brazil can achieve greater agricultural production, protect the environment, and create a more sustainable future.

Priscila Souza is a Senior Analyst at Climate Policy Initiative (CPI) in Brazil.