The illicit demand for their horns and other body parts has pushed rhino populations in both Africa and Asia to the brink of extinction. In northeastern India, though, one father-daughter team is hoping another rhino product could help save the species: its dung.

Based in Assam state, the global stronghold of the greater one-horned rhino (Rhinoceros unicornis), an innovative company called Elrhino has for seven years now been transforming rhino waste into luxury paper products. Their goal, say co-founders Mahesh and Nisha Bora, is to make wildlife conservation sustainable by ensuring that local communities have a financial stake in protecting these rare animals.

Too much of a good thing?

The increase in India’s rhino population from fewer than 200 animals at the beginning of the 20th century to around 2,850 today is a global conservation success story. But this population growth has a downside: Higher densities within protected areas means that rhinos are more likely to stray out of parks and into villages, a source of concern for both the affected local communities and this vulnerable species.

In a village called Rajamayang, about 2 kilometers (1.2 miles) from the Pobitora Wildlife Sanctuary, farmer Kalicharan Nath is dismayed to find that parts of his rice fields have been trampled by rhinos that strayed into the village the previous night.

He’s not alone. There are about eight small villages within 8 kilometers (4.8 miles) of the park’s boundaries, and they regularly receive late-night visits from rhinos in search of juicy grasses and shrubs. The animals “relish” young rice sprouts, says Lalit Nath a farmer from nearby Kalangpahar village. As the rice plants get bigger and tougher, “these large animals simply walk over them, stamping the saplings that lie in their paths,” he says.

Pradipto Baruah, the divisional forest officer for Pobitora, says that there are now 102 rhinos in the 38.8-square-kilometer (15-square-mile) sanctuary.  That gives the park the world’s densest population of one-horned rhinos. In reality, though, it’s even more crowded. Thanks to “biotic pressure from more than a dozen surrounding villages,” the park’s rhinos are concentrated within a core zone of barely 16 square kilometers (6.2 square miles).

“Most of these villagers rear cattle which invariably enter the park for grazing,” Baruah says. “In fact, watching the rhino and cattle grazing in the same field is becoming a common sight in Pobitora.” Facing competition within the park, rhinos are even more likely to graze outside its boundaries.

The situation is a recipe for human-wildlife conflict. Face-offs between angry villagers and the two-ton animals can turn out badly for both sides: earlier this year an 80-year-old man was killed by a rhino in Assam, while in 2016 suspected poachers shot and injured a stray rhino before wildlife officials transferred it back to a protected area for treatment.  However, neither Kalicharan nor Lalit have turned hostile, despite the risk to their crops.

If the rhinos have left behind giant telltale signs of their presence — footprints and trodden paddy plants — they have also “gifted” the local communities with heaps of their dung. These are promptly picked up by the villagers and carefully stowed in sacks. Thanks to the initiative started by Mahesh and Nisha Bora, rhino dung means money that can compensate them for their losses.

That’s when Elrhino, the “poop to paper” company, steps in to purchase the dung from them.

“We ensure that not only are they compensated for their contribution, but also made aware on the importance of rhinos,” says company CEO Nisha Bora. “They feel proud in being able to co-exist with such a rare species and thus will not cause damage to them.”

In addition to the wild rhino dung paper, the company also manufactures paper from the droppings of captive elephants in the area. Banana pseudostems and the stems of the water hyacinth, found in abundance across Assam’s wetlands, are also used as fiber sources.

“Both rhinos and elephants eat a lot of grass, and their gastrointestinal tract cannot digest fibers well and hence their dung is full of fiber,” Mahesh says. “So are the parts of banana plants and other such natural components, all of which endow the paper [with] its distinct texture and intrinsic character.”

These are then used to make luxury paper products that have found markets in Hong Kong, the United States, Switzerland and the United Kingdom as well as India.

The place where this transformation occurs is the Elrhino manufacturing unit at Chaygaon, about 65 kilometers (40 miles) from the sanctuary. The collected dung is first thoroughly washed to separate the undigested grass fiber from extraneous materials like fecal waste, pebbles, dirt and mud, says manager Hrisikesh Choudhury. The fiber is then boiled in caustic soda to straighten and soften it, and dried under the sun. The resulting yarn-like material is next mechanically whipped up into a pulp by adding shredded hosiery rags, recycled paper offcuts, water and adhesive. “We just need half a kilo of dung fiber in the mix, so our requirement of rhino dung gets easily fulfilled from the local villages,” Choudhury says.

This pulp is next mixed with water in cement vats then transferred onto molds fitted to sieved screens. After a few minutes, the excess water drains out and the resulting sheet of paper is gently lifted out and pressed in a hydraulic machine.

A liter of pulp solution gives one sheet of paper, says Malobika Rabha as she works at the mold alongside her colleague Mallika Kalita from Chaygaon village.

One of the earliest workers, 28-year-old Rabha from neighboring Deliapara village is regarded as an expert in paper making. “The consistency of the pulp or how much water is to be mixed for what thickness of paper is important,” she says as she gently lifts wet paper from the mold.

Finally, the paper goes through calendaring — polishing with metal and rollers — that makes the sheets smoother and writable. 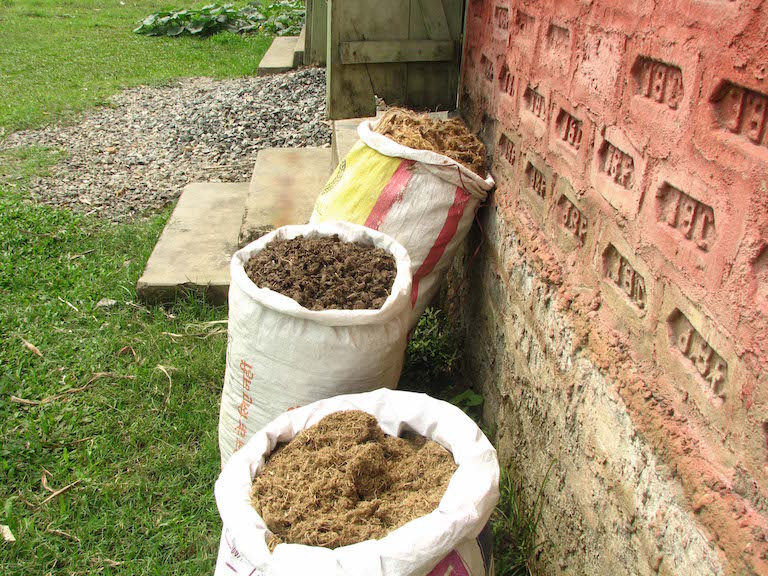 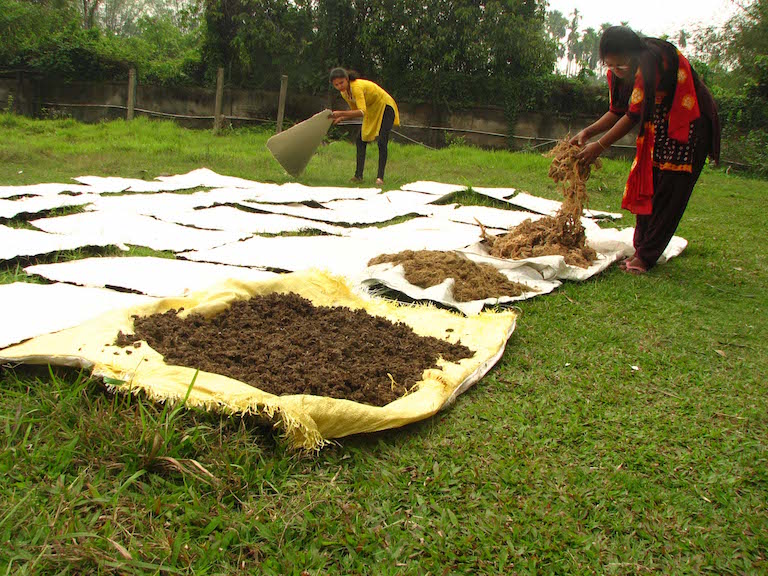 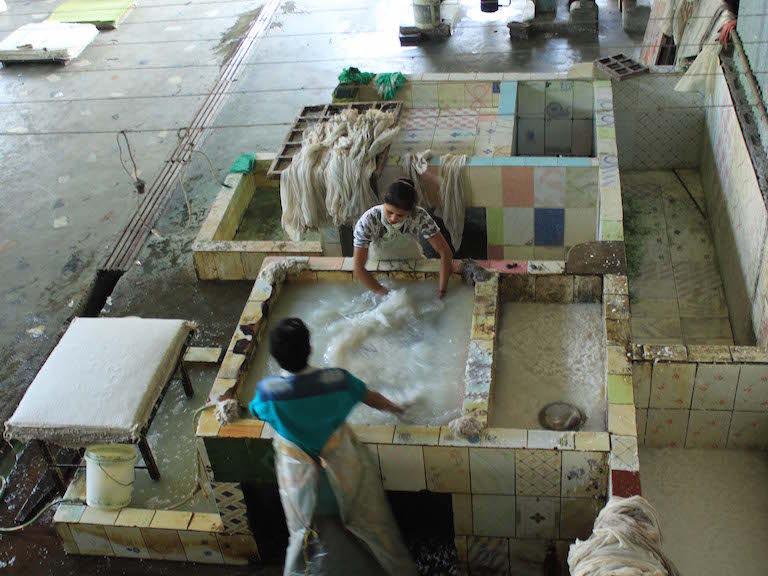 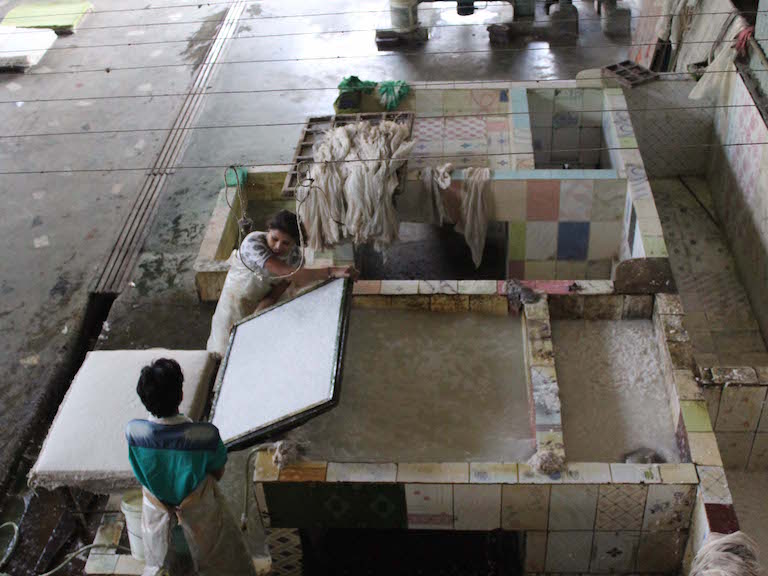 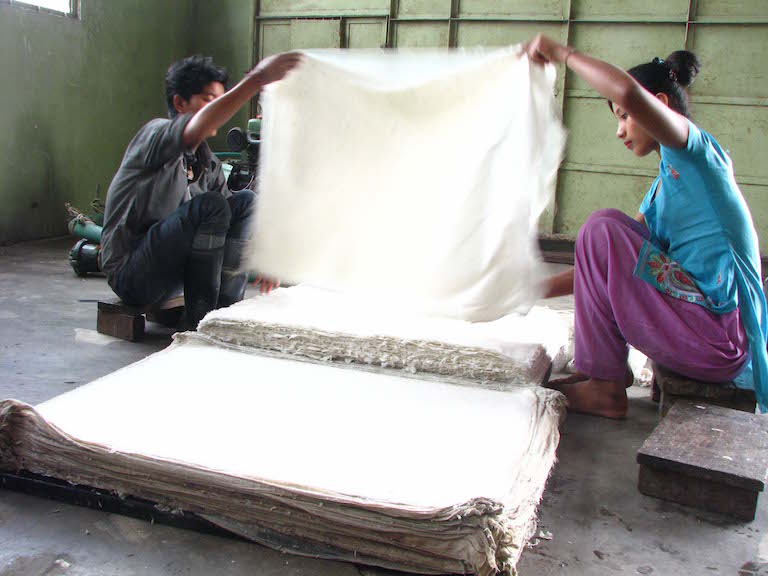 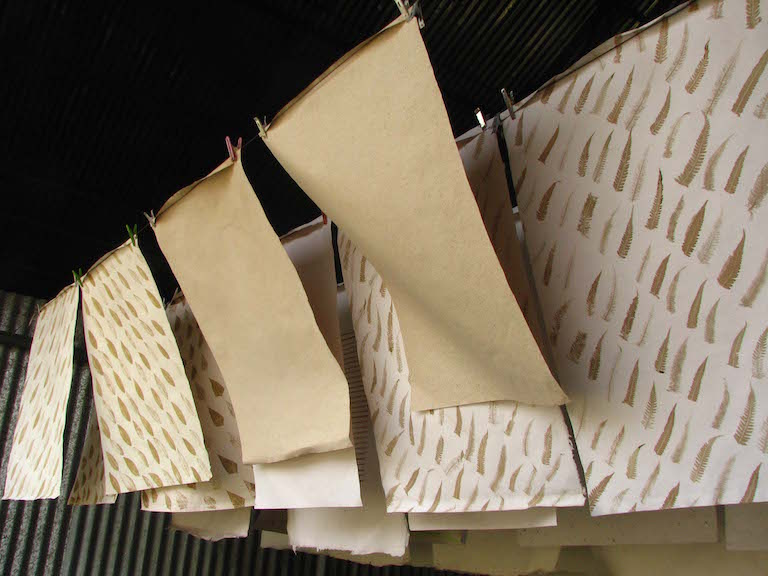 Some of the paper is sent out directly to customers, while the rest gets made into items like notebooks and day planners, fancy bags, lampshades, photo frames and a host of other items. Many of these are further embellished with ethnic Assamese designs and strings crafted by rural artists and artisans. The company concentrates on wholesale purchasers, but also has a small retail operation, with products available at Mumbai’s main airport, through online outlets and directly via a catalog.

According to Nisha Bora, the factory is capable of producing 2 tonnes of paper per month. It hasn’t turned a profit yet, and its directors work without salaries, but the company covers its expenses and is growing by about 20 percent per year, she adds.

When the factory was established in 2012, villagers were skeptical, Choudhury says. “The most difficult part was motivating the local villagers to be a part of our dung-handling company. They were hesitant to touch the dung and dirty their hands initially,” he says.

“However, the villagers got convinced and now we are 10 workers directly employed by the company at the factory. But there are nearly 100, 120 women from the neighboring villages, who are also a part of the Elrhino family,” he says.

In the village of Chatabari, about 2 kilometers (1.2 miles) from the factory, Komola Das and her sister Meenakshi were busy organizing about a dozen women who had assembled in their courtyard in the late afternoon, after completing their routine household chores. They settled down with jute fibers, processing and braiding them into delicate strings. According to Hirumoni Thakuria, a woman from the group, these strings are put to multiple uses, including stitching notebooks or as straps for bags.

Another group led, by Biju Thakuria, was weaving gamocha, the traditional red-and-white Assamese scarves, for notebook covers. Kaushalya Das and her team were making covers using water hyacinth stems. Such groups of women have also been organized in other villages in Chaygaon and near Pobitora Wildlife sanctuary.

“We spend about three, four hours a day, enjoy each other’s company and go home richer,” says Rupohi Bhuiyan, from Hohora village near Pobitora. But the benefits don’t stop there, Bhuiyan says. “We feel proud in being able to contribute to our family income while supporting such a noble cause of rhino conservation.”