For Cambodia’s last remaining Indochinese leopards (Panthera pardus delacouri), extinction could be just around the corner, a new study has found.

The only breeding population of this leopard subspecies in Cambodia is believed to occur within a large protected area complex in a part of the country called the Eastern Plains Landscape (EPL). But in just five years, leopard density within one protected area in the EPL has fallen from about three leopards per 100 square kilometers (39 square miles) in 2009 to one leopard per 100 square kilometers in 2014, a team of scientists found.

This is one of the lowest densities of leopards reported in Asia, researchers write in the recent study published in the Royal Society Open Science journal.

“The low density means that this population of Indochinese leopard has a high risk of extirpation in the near future, unless effective conservation action is taken immediately,” said lead author Susana Rostro-García, a postdoctoral researcher at the Wildlife Conservation Research Unit (WildCRU) at the University of Oxford, U.K.

This decline is especially worrying because the Indochinese leopard has already been wiped out from 94 percent of its former range.

The loss of Cambodia’s Indochinese leopards would deprive the world of a unique member of the leopard family.

When the team analyzed leopard droppings collected from the study area, they found that the male leopard’s main prey was the massive, 500-kilogram-plus (1,100-pound-plus) rare wild cattle species called the banteng (Bos javanicus). This finding was unexpected, the researchers say.

Although previous research has recorded instances of African leopards preying on large-sized prey like giraffe or eland, these animals comprise a very small proportion of the leopard’s diet, the authors write. Instead, leopards, which typically weigh less than 90 kilograms (198 pounds) prefer to prey on smaller animals weighing about 10 to 40 kilograms (22 to 88 pounds).

By contrast, male Indochinese leopards in the eastern Cambodian study site appear to prey predominantly on an animal more than five times its mass, making this the only known leopard population in the world to do so.

The leopards there could be targeting banteng because the large herbivore represents about 70 percent of the available ungulate biomass within the study site, Rostro-García said. Moreover, tigers, whose main prey was the banteng, went locally extinct in the landscape a decade ago, allowing leopards to take over as the apex predator.

“Tigers kill and displace leopards, and previous research showed that when tigers are present, leopards consume smaller prey to avoid encounters with tigers,” Rostro-García said. “Thus, the leopards in eastern Cambodia likely changed their predatory behavior to include the banteng, the largest herbivore, which may have been previously off limits to them when tigers were present.”

But only the male leopards seem to be consuming banteng, the team found. The female leopards preferred muntjac (genus Muntiacus), a small deer. This difference is likely because male leopards can grow up to 50 percent larger than females, the researchers say, suggesting that the banteng might be “too large and dangerous” for female leopards to prey upon, but not for the larger male leopards.

Despite the availability of prey of all sizes, Cambodia’s leopards are on the verge of extinction. And poaching is to blame, the researchers say.

“Our conclusion was based on evidence we collected during the study: The presence of considerably higher numbers of snares in the core zone compared to previous years, and the documentation of several snared animals, including leopard, in the core zone in recent years,” Rostro-García said. “Other possible explanations, such as prey declines and differences in methods across years, were not likely given that prey densities remained stable across years, and we used the same camera-trap methodologies as in the previous study.” 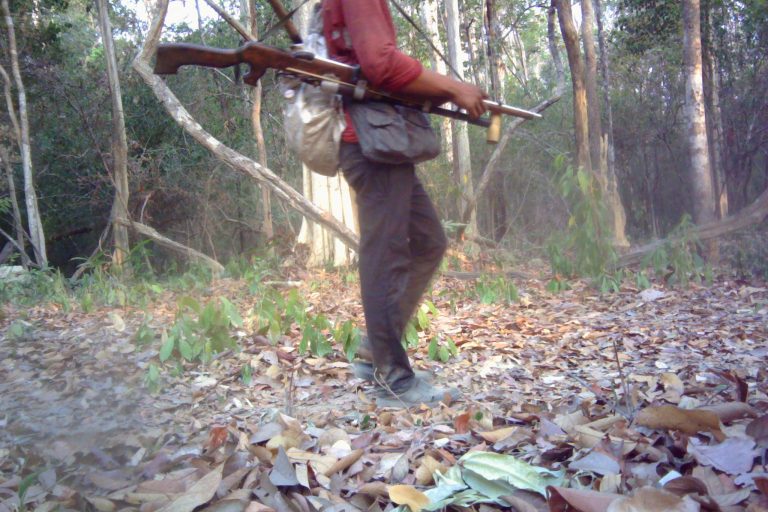 In fact, a study published last year reported that Southeast Asia was in the middle of a “snaring crisis.” Between 2010 and 2015, patrol teams removed more than 118,000 snares from just three protected areas in Cambodia, the researchers found.

Hunters use these snares to meet the rising demands for bushmeat in Southeast Asia. However, snares kill indiscriminately, trapping not just smaller rodents and mammals, but also larger leopards and baby elephants.

“Many areas are covered with thousands of snares set to catch wild pig and deer to supply bushmeat markets,” Kamler said. “Leopards and other wildlife are often caught in these snares as bycatch, and the valuable parts sold to traders.”

To protect the last remaining Indochinese leopards in Cambodia, Panthera is focusing on increasing its monitoring efforts and expanding its survey areas. “We are also working with our collaborators, WWF Cambodia, WildCRU, and the Ministry of Environment, to help strengthen environmental laws in eastern Cambodia to develop strictly protected core zones and increase fines from poaching,” Kamler wrote in a blogpost.