In the village of Tramataia, Brazil crab-pickers, or caranguejeiros, walk to the shoreline at night with an offering of tobacco to Father Mangrove. They ask for a bountiful hunt and seek permission to enter the mangroves safely. Father Mangrove is a revered man of great stature who smokes a pipe and carries a “sambura,” a handmade basket to fill with fish. Caranguejeiros who disrespect the spirit by using harsh words or harming mangroves consequentially suffer animal attacks, damaged canoes, unlucky hunts, or total disorientation – they can’t find their way home in the nearly-impenetrable mangrove forest.

Brazil lays claim to 8.5 percent of the world’s mangroves, spanning from Amapá in the north to Santa Catarina in the south and covering approximately 13,000 square kilometers. It is the second largest area of mangrove forests on the planet.

Native communities here rely on these mangroves for food, building materials, and medicines. For example, most families in the village of Tramataia (population 1,100) in Paraíba State rely on large mangrove crabs (Ucides cordatus) for subsistence and also as their main source of income. Men traditionally harvest crabs, while women dissect the meat.

But markets are changing, and crabbing communities in Paraiba State are not immune to the globalization of trade. Today, mangrove crab hunting is less traditional and becoming more commercialized. A recent study by Dr. Douglas Nascimento, published in Ecological Economics, explores this transformation – and its impacts – in small shoreline communities like Tramataia.

Tramataia’s crabs are sold alive in regional markets or traded as processed meat to global chains. In a poor community with subpar medical care, education, and sanitation, crabbers are maximizing their income just to make a basic living. To do so, they rely on intermediaries to bring crabs to market.

But this commercialization of crabbing incentivizes new harvesting techniques that damage the very mangroves locals depend on. Moreover, it drives a wedge between traditional, passive harvesters and those who adopted a newer, environmentally-harmful snaring technique called the “redhina” method.

“The growing numbers of users of redinha technique is slowly eroding traditional knowledge about the MRE [Maranguape River Estuary], knowledge that involved an elaborate understanding of the mangrove ecosystem as a whole,” Nacimiento wrote in a paper published in the Annals of the Brazilian Academy of Sciences.

Harvesters dig away at a crab burrow with a machete and insert a small net (redinha) over the mouth. The harvester then cuts off a small section of mangrove root and uses it to secure the nylon strings of the snare. Days later, the harvester will walk his trapline to gather what he’s caught.

Crabs could die if the snares are not revisited in a few days, and caranguejeiros report pollution from the dead crabs and the plastic netting, which is habitually left in the mangroves.

The states of Paraíba and Rio Grande do Norte have prohibited the “redinha” trap. The regional ordinances of the Brazilian Institute of the Environment and Natural Resources (IBAMA) also prohibits the capture of females and any small crabs, which are often used in meat processing. But redhina traps do not discriminate among differently sized crabs.

According to Nascimento’s earlier work, published in the Annals of the Brazilian Academy of Sciences, the redhina snaring technique is widely popular. Eighty five percent of interviewed harvesters reported that they used redhina, despite the fact that it’s considered predatory and promotes illegal harvesting.

Redhina can also lead to the destruction of mangrove habitat, according to Nascimento’s research, as well as the unsustainable overharvest of large mangrove crabs. To use the redhina, at least one root must be cut for every snare. That means an average of 49,680 roots could be cut by a single worker in one year.

The Mangrove Action Project (MAP) says the world has already lost over half of its original mangrove forest area due to tourism development, urbanization, shrimp farming, rice paddies and climate change. The world continues to lose one percent of its mangroves or about 150,000 hectares each year. Meanwhile, the Food and Agriculture Organization of the United Nations (FAO) estimates that mangroves now cover less than 15 million hectares worldwide, down from 19.8 million hectares in 1980.

“If we can help educate the local crab harvesters on sustainable resource use and conservation, the crab harvesters could become our strongest allies, protecting the very resources they depend upon for their livelihoods,” said Alfredo Quarto of MAP. “After all, it is to their benefit that this happens. Protecting the mangrove forests is an obvious preconditioning for ensuring a viable production of crabs, shellfish, shrimp and fish.”

Once thought to be a useless, pungent wasteland of mosquito-infested, scrawny trees, mangroves were nonchalantly deforested. Mangrove trees are commercially harvested for pulp production, wood, and charcoal. More recently, trees are being cleared to make room for industry, especially resorts and eco-tourism programs. Mangrove deforestation leads to salinization of coastal soils and loss of life and property from erosion and extreme weather events.

“Mangroves are vital for the future of our planet to help combat climate change, enhance our wild fisheries, protect shorelines from rising seas and erosion, from hurricanes and tsunamis and provide life and livelihood for millions of coastal people living in the Global South,” said Quarto. 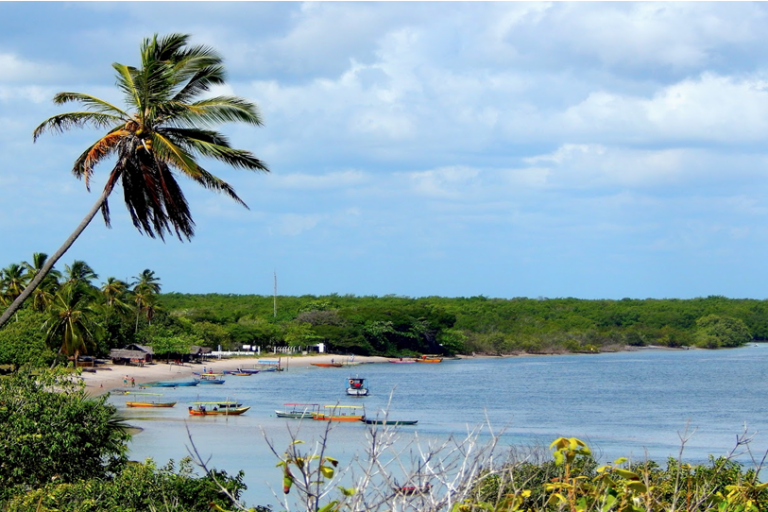 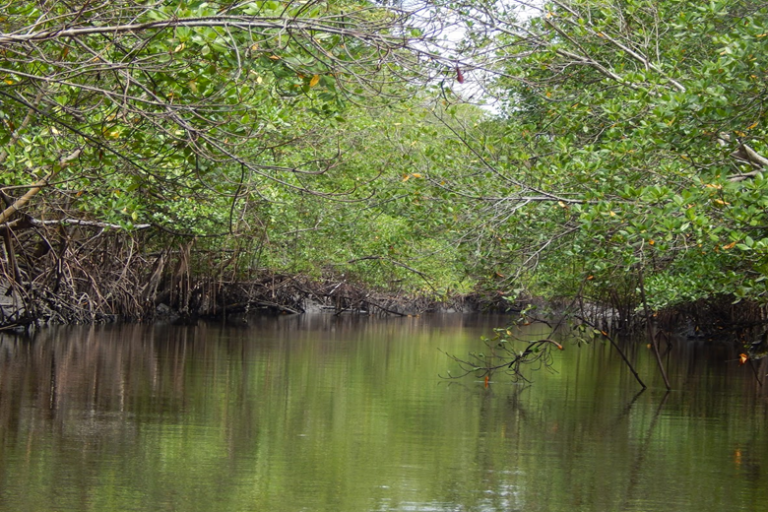 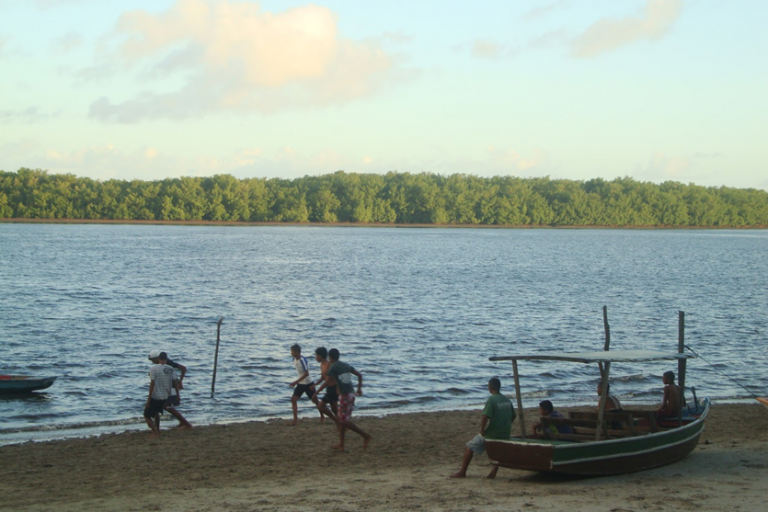 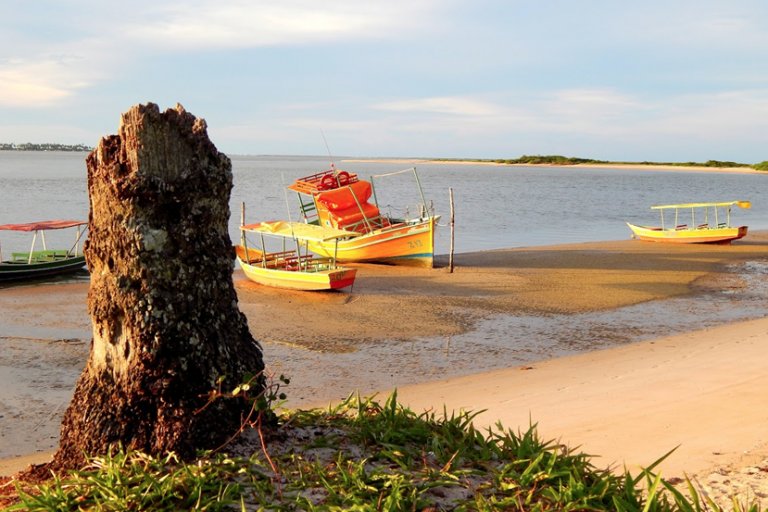 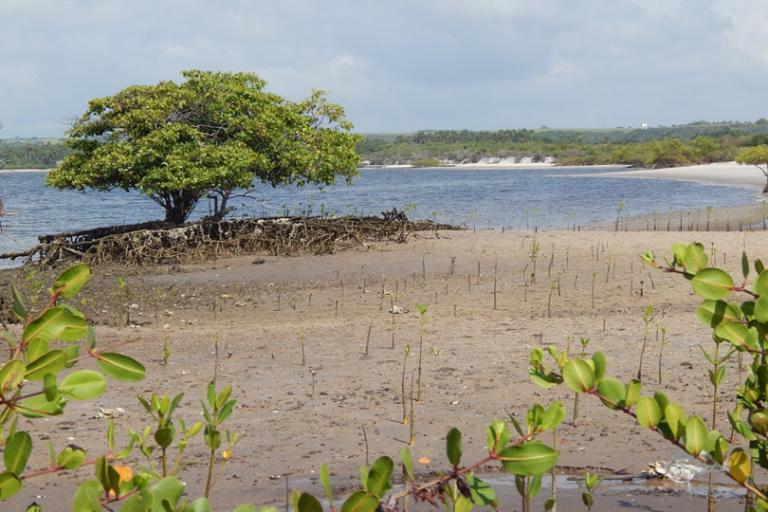 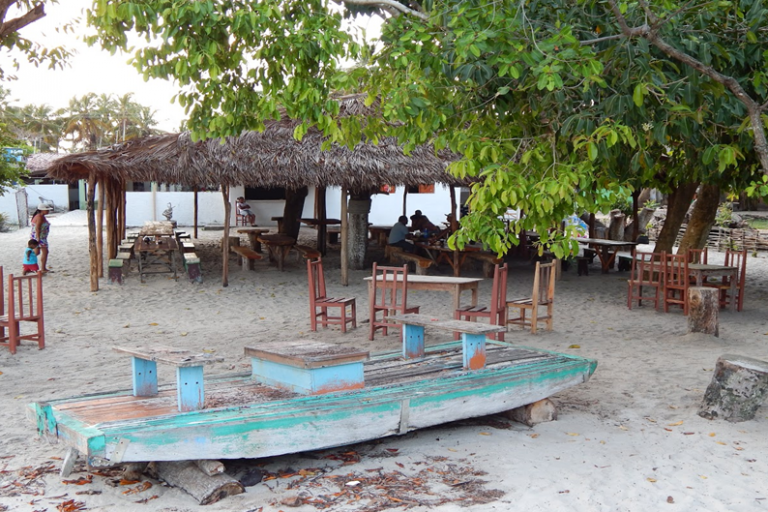 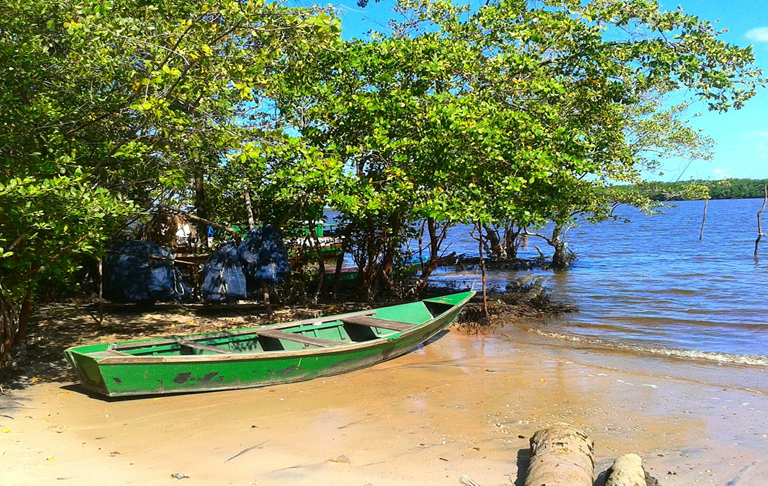 The bracameanto is a traditional subsistence harvest method passed down generationally. The catcher puts his arm down a crab’s burrow and pinches the crab by its dorsal carapace between two fingers. The catcher does not need to lay traps or follow a predetermined route. There’s no need to re-visit burrows, or slash trees to set a trap. Moreover, harvesters can release any female crabs or any crabs less than six centimeters wide. Selective crabbing ensures the healthy repopulation of the crab stock, so profits can continue well into the future.

The tapamento is an abridged version of the bracameanto where the crab catcher covers the crab den by pushing sand over the opening with his feet. The crabs will eventually dig themselves out of the entrapment, but they’re easier to catch after their exertion. This method takes more time, but it’s also less intrusive to the ecosystem and safer for the harvester.

Despite socio-economic and environmental benefits, crab harvesters are unlikely to return to passive harvesting so long as they remain tied to intermediaries.

“Crab harvesters are strongly dependent, both socially and economically, on the intermediaries,” said Nascimento. 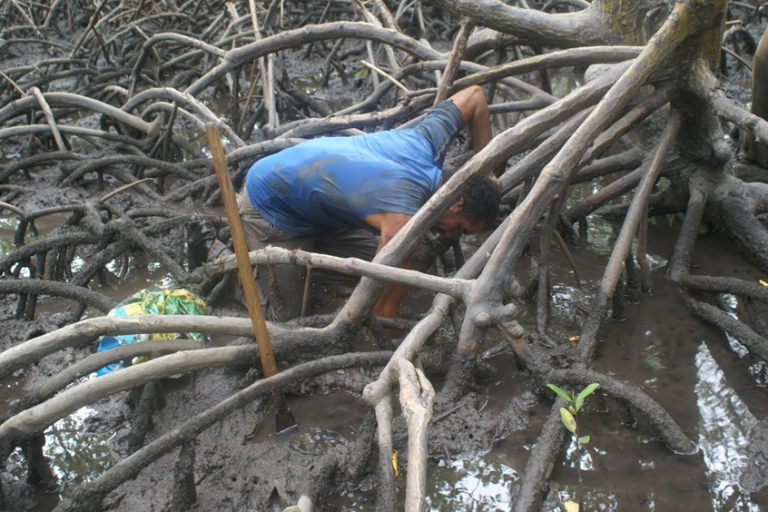 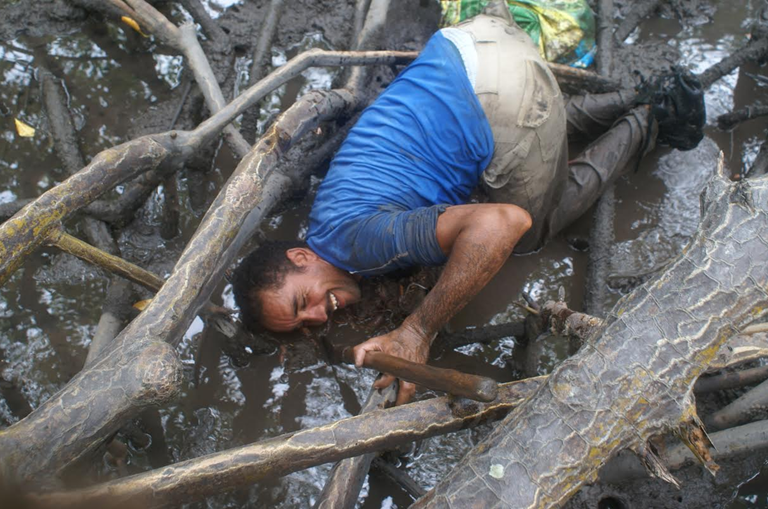 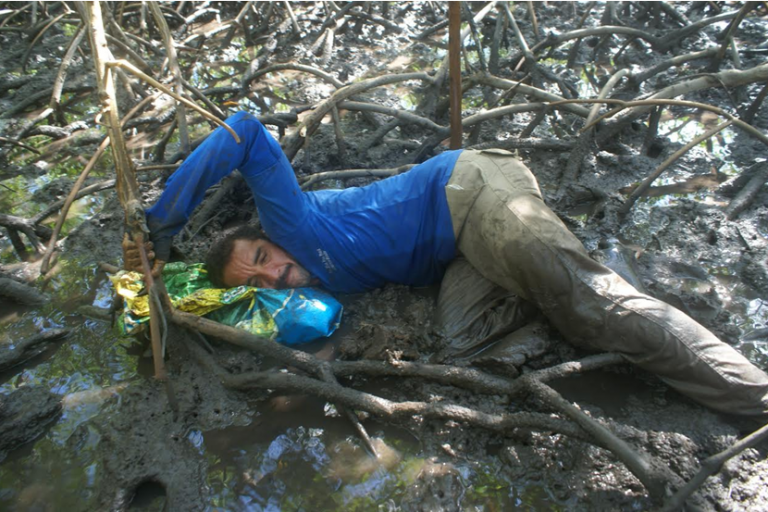 The relationship between the caranguejeiros and the intermediaries is complicated. On one hand, intermediaries provide swift sales and the guaranteed purchase of crab meat, allowing harvesters to spend more time in the field and less time peddling their catch. Sixty-five percent of harvesters told Nascimento that they did not have the ability to commercialize their catches on their own.

Intermediaries buy crabs below the legal size (six centimeter- carapace width) and use them mostly for processed meat. Women in Tramataia boil the smaller crabs in large aluminum cauldrons for thirty minutes before dismembering the crab and extracting the meat. Intermediaries take the meat and store it in freezers. They often report the meat contains traces of spotted eagle ray (Aetobatus narinari) and nurse shark (Ginglymostoma cirratum). Ray and shark meat generally sells for much less on the open market than crab. By padding the crab catch with ray and shark meat, harvesters meet the high quotas set by intermediaries and sell lower quality meat for a higher price.

According to the intermediaries, this “fake” crab meat can account for more than half the meat sold commercially. Meat from the crab’s ventral region is sold for US $5.76/kg and meat from the claw is more valuable, sold for US $10.08/kg. The bar and restaurant owners in the city of João Pessoa, a popular end market, purchase a dozen live crabs for US $7.20.

All five intermediaries interviewed by Nascimento said they provide informal loans to the harvesters without any written documents. Loans mostly went towards housing expenses for caranguejeiros in exchange for exclusive rights to all of the harvester’s crabs.

But interviewed caranguejeiros reported to Nascimento that they “felt exploited by the low prices offered to them for their hard labors.” This resentment was not openly expressed, as most intermediaries and harvesters become friends and godparents to one another’s sons and daughters.

The mangrove crab is included in the national list of Overexploited or Threatened Species of Exploitation and there is a proposed management plan to sustain a healthy crab population.

However, IBAMA, the Brazilian Environmental Agency, has historically done a poor job of communicating regulations to indigenous communities, according to Nascimento.

“The regulation of crab capture is the responsibility of the IBAMA, but a conservation oriented regulatory framework currently in effect is based on prohibitive rules that were largely designed without the participation of the crab collectors themselves.”

Crabbing for conservation- is a win-win possible?

The crab scavengers of the village Tramataia also have poor social standing, which exacerbates their socioeconomic vulnerability. Nascimento recommends both the harvesters and the women who process crab meat should organize themselves into cooperatives in order to market their harvests and free themselves from intermediaries.

“If there is interest from the intermediaries, they could also be part of the same cooperatives or associations,” he wrote in an email. “The crab harvesters of Tramataia village constitute a group with socioeconomic vulnerability and poor social organization. So, for the formation of a cooperative, there must be a connection between harvesters and partners (government, enterprises, and public and/or private institutions), which may be formed by the scientists and the management of the Conservation Unit (CU) in which the community is inserted.”

The organization of cooperatives might even aggregate the value of crabs themselves, and ultimately help caranguejeiros better control crab supply to dictate local market prices.

A cooperative would also incentivize harvesters to record the size and amount of their catch, so they could monitor crab populations and ensure the health of the mangrove ecosystem, according to conservationists. This would require building business relationships with nonprofits and private institutions to help them store and transport the crab. Partnerships with research organizations and even government institutions could help with conservation projects. It’s also possible to make and sell fertilizer from the discarded crab.

According to Nascimento, there are other examples of such cooperatives that are improving the quality of life of crab collectors in Brazil. One such example is called DELTA-UÇÁ, which enhances the sustainable commercialization of the crab in the region of the Delta of the river Parnaíba, northeast of Brazil.

Tramataia could benefit from a similar model. Locals could potentially generate income while simultaneously protecting the mangrove against illegal cutting. And Father Mangrove could once again smoke his pipe in peace.