Renowned biologist Edward O. Wilson calls for preserving half of Earth to save biodiversity

Commentary by Leon Kolankiewicz on 22 February 2017 |

Hear E.O. Wilson talk about his Half-Earth proposal in this January 2017 edition of Mongabay’s podcast.

The current issue of Sierra, a magazine published by the Sierra Club, contains a bold — perhaps unrealistic — “manifesto” by the eminent Harvard biologist E.O. Wilson calling for preservation of half the planet in an undisturbed, natural condition in order to save beleaguered nonhuman life on Earth.

The manifesto is based on Wilson’s impassioned book Half-Earth: Our Planet’s Fight for Life, published in early 2016. In Half-Earth, Wilson argues that the situation facing humanity and biodiversity is so desperate that it requires a dramatic response: dedicating fully half of the planet’s surface area to nature and natural forces, an arrangement a New York Times interviewer calls “an improbable prescription for the environment.”

When asked by the Times in 2016 why he is making this urgent plea now, the 87-year-old, two-time Pulitzer Prize winner for General Non-Fiction and University Research Professor Emeritus at Harvard acknowledged that facing his own imminent mortality had something to do with it. But he added:

[A] lifetime of research has magnified my perception that we are in a crisis with reference to the living part of the environment. We now have enough measurements of extinction rates and the likely rate in the future to know that it is approaching a thousand times the baseline of what existed before humanity came along.

[T]o save biodiversity, we need to set aside about half the earth’s surface as a natural reserve. I’m not suggesting we have one hemisphere for humans and the other for the rest of life. I’m talking about allocating up to one half of the surface of the land and the sea as a preserve for remaining flora and fauna.

In Sierra, Wilson writes that:

Only by committing half of the planet’s surface to nature can we hope to save the immensity of life-forms that compose it. Unless humanity learns a great deal more about global biodiversity and moves quickly to protect it, we will soon lose most of the species composing life on Earth. The Half-Earth proposal offers a first, emergency solution commensurate with the magnitude of the problem: By setting aside half the planet in reserve, we can save the living part of the environment and achieve the stabilization required for our own survival.

Wilson’s proposal calls not for removing people living in and depending on the natural resources of wildlands around the world, but for managing these areas in a manner that would preserve their living legacies of biodiversity, something akin to how World Heritage Sites are managed. In his calculations, he also is including protected marine areas where no fishing is allowed. 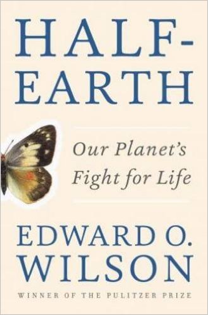 Oddly, for an entomologist and ethologist (animal behaviorist) whose happiest moments in life were spent exploring tropical rainforests and peering at amazing and bizarre insects, Wilson is no stranger to controversy. Perhaps because of his very integrity, it has stalked him like a wildcat for much of his career, reaching a zenith in the mid-1970s after he wrote the tome Sociobiology: The New Synthesis.

This landmark book documented new research in evolutionary biology and psychology; it argued that both nature (instinct) and nurture (culture) determine human social behavior. The idea that any social behavior at all could be attributed to instinct and genetic inheritance — rather than to sexist and racist institutions and cultures — rocked progressive professors in the academic world, who were becoming the dominant force in humanities and liberal arts departments at universities around the country. Some of Wilson’s Harvard colleagues, including the well-known paleontologist and avowed left-winger Stephen Jay Gould, plotted to have Wilson stripped of his academic tenure and kicked out of Harvard.

Yet, Wilson’s own views and his science have prevailed. Today there is widespread scientific consensus that much human behavior is indeed genetic, and the whole new field of evolutionary psychology has opened up.

Wilson was one of the first scientists to be intrigued by the concept of the ecological footprint (EF) and analytical methods to calculate per capita biocapacity and EF (consumer demands for cropland, forest, grazing land, marine and inland waters, and built-up land), developed in the early 1990s at the University of British Columbia in Vancouver, Canada, and their potential to quantify and illustrate humanity’s aggregate loads on Planet Earth.

Dr. Wilson put in a good word about EF to the most prestigious scientific body in the U.S., the National Academy of Sciences, and in 2002, he edited a scientific paper on EF by Mathis Wackernagel and co-authors entitled “Tracking the ecological overshoot of the human economy” for publication in the Academy’s Proceedings of the National Academy of Sciences (PNAS). In part thanks to Wilson’s interest and efforts, in less than a decade, EF emerged from ecotopian obscurity in the Pacific Northwest to being embraced by America’s scientific establishment, and later the world’s. At the same time, EF, and a derivative, the Carbon Footprint, began to be popularly accepted and widely applied by environmental advocacy groups, national governments, the UN, news media, and the public at large.

Prof. Wilson has long been concerned about the impact of human overpopulation on other living beings. In a 2002 article for Scientific American, “The Bottleneck,” he wrote:

The pattern of human population growth in the 20th century was more bacterial than primate. When Homo sapiens passed the six-billion mark we had already exceeded by perhaps as much as 100 times the biomass of any large animal species that ever existed on the land. We and the rest of life cannot afford another 100 years like that.

Wilson was even dragged into the bitter, internecine struggle within the Sierra Club in 1998 over whether it should return to a national population policy that once again acknowledged that immigration should be curbed to stop U.S. population growth. In January 1998, he penned a letter to then-executive director Adam Werbach that said, in part:

I have come to believe that population is so salient a factor in the future of the environment, and especially of biodiversity, that it should be faced squarely and openly whenever possible. And since the issue within the Sierra Club is to be decided democratically by ballot, with supporters and arguments on both sides, and since the initiative calls for ‘reduction in net immigration’ (no slamming of doors there), it is hard to see why the membership cannot be trusted to make a wise decision with the interests of the Sierra Club in mind.

In spite of his deeply held concerns, Wilson insists that he is an optimist, that he believes human beings can rally in time to save what is left of our fellow creatures from oblivion.

With the deepest respect and admiration for the man, I myself think he is a bit too sanguine. He told The New York Times that global population is stabilizing and that “high tech is producing new products and ways of living that are congenial to setting aside more space for the rest of life. Instrumentation is getting smaller, using less material and energy.”

Actually, while many countries are at or near population stabilization, on a global scale, the human population is growing as fast and as fiercely as ever. And whether or not technological advances can keep pace with inexorable resource depletion is not at all certain.

When I was a Peace Corps Volunteer in Central America, I worked on behalf of the conservation of one of the very World Heritage Sites Wilson is promoting, and I saw firsthand how little of a difference protected status declarations on paper meant to what actually occurred on the ground. There must be deeply rooted and widespread political and popular support to actually protect “protected areas.”

I would like to put aside the doubts seeded from my own experience, believe in humanity’s capacity to change and take a more balanced place among all living things, and embrace the optimism Wilson feels. There is evidence for that path. Through his nearly 90 years of exploration, inquiry and controversy, the visionary Wilson has taken positions and pointed toward destinations that ultimately have prevailed – that which was considered outside of accepted thinking or conventional wisdom has become mainstream. Such indeed may be the case with Wilson’s bold Half-Earth idea, notwithstanding naysayers casting it as an “improbable prescription.”

This great scientist and visionary has given us an audacious goal towards which to strive. We can only hope it inspires action by large enough numbers of people to drive the solution Wilson has envisioned to save what we’re so rapidly losing.

Leon Kolankiewicz is a wildlife biologist and environmental scientist and planner. He is the author of Where Salmon Come to Die: An Autumn on Alaska’s Raincoast, the essay “Overpopulation versus Biodiversity” in Environment and Society: A Reader and was a contributing writer to Life on the Brink: Environmentalists Confront Overpopulation. He also is an Advisory Board Member and Senior Writing Fellow with Californians for Population Stabilization.