One of the rescued lorises, named Canon, was pregnant at the time of rescue, IAR said in a statement. Poachers had shot her with an airgun, and pellets were still lodged behind her right eye and in her back. The IAR medical team decided to forego surgery, and let her wait in peace for the arrival of her baby. Canon gave birth to her baby four days later.

IAR has now released footage of the baby loris, who seems to be active and in good condition.

“The team caring for them report that Canon is feeding well and feasts every night on gum (hardened tree sap), vegetables, fruits and insects,” IAR said in a statement, “She is also receiving multivitamins and calcium for her own health and to support the healthy growth of the baby she is nursing. Canon is taking excellent care of her baby, providing him with plenty of milk and grooming him regularly.”

However, not all rescued lorises were fortunate. Many individuals were showing signs of “extreme stress” at the time of their rescue, IAR said. Some individuals had their teeth removed, some had been shot by airguns, and others had bite wounds, most likely because they were crammed together in small crates.

“This is a tragic example of the suffering and loss of life caused by the illegal trade in wildlife,” Alan Knight OBE, Chief Executive of International Animal Rescue, said in the statement. “All these female lorises could have given birth safely and successfully in their natural environment. Instead they were ripped from the rainforest to be sold as pets by traffickers intent on making money out of them.”

“Thankfully, on this occasion the police investigation resulted in the arrest of three hunters and two dealers which must send out a strong message to other wildlife criminals,” Knight added. “But as far as the lorises are concerned, the damage has already been done.”

The Javan slow loris, found only on the western and central portion of the island of Java in Indonesia, has suffered rapid decline in its population over the past two decades. It is frequently hunted and traded illegally for the exotic pet trade, and is also threatened by habitat loss. Last year, the Javan slow loris was listed as one of the 25 most endangered primates in the world. 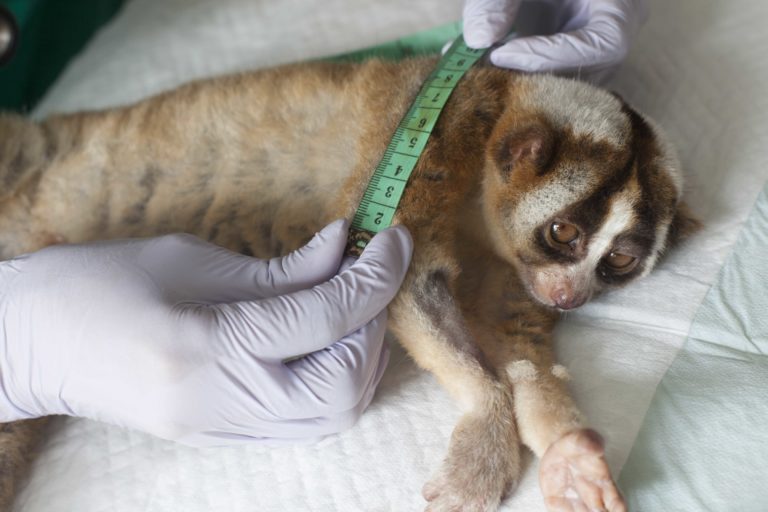