Are prosthetic reefs the answer to Indonesia’s coral die-off?

Giving genetic material to rebar. by Melati Kaye on 14 January 2016

Clad in wetsuits, four divers finned past a grey slope of rubble. This desolate, submarine pile in the Wakatobi islands in eastern Indonesia is all that remains from years of reef bombing done by fishermen looking for faster harvests. One of the divers, Wakatobi National Park guard Putu Suastawa, ran his fingers through the sand, combing for broken but still live coral bits.

These bits were for consolidation into Wakatobi’s first artificial reef: the Raksasa Rumah Ikan, which literally translates as something like “Monster Fish Condo.” But, in English, its creator, Jakarta-born, Berlin-educated sculptor Teguh Ostenrik, prefers to call it “the ARTificial reef.”

That’s art, with a capital ART. “It’s living art,” explained Ostenrik of the six-by-eight-meter sculpture shaped like a Borneo longhouse. It is made of Biorock, a patented artificial reef system that involves coursing electricity, generated from solar panels or piped in from land, into steel rebar frames. The electric current causes water, dissolved carbon dioxide and trace elements in the surrounding sea to recombine as calcium carbonate – the compound that makes up the hard skeletons of coral and seashells. Broken reef fragments secured to the rebar frames bring the assemblage to life.

The Biorock system used in the Wakatobi ARTificial reef was invented in the 1990s by a German architect named Wolf Hilbertz. He saw Biorock – or, as he liked to call it, “Seacrete” – as a building material of the future and dreamed of a self-sustaining city built of Biorock in the Indian Ocean. Hilbertz’s seastead never took off, but Biorock found favor as a conservation technique since it grows coral five times faster than natural conditions.

“Within the first day of electricity coursing through it, little fish come,” Ostenrik told Mongabay while he oversaw finishing touches to the Biorock in a workman’s denim overalls. “By the second day, the structure is covered in limestone.” He has decorated the structure with a laser-cut steel plate filigree in the shape of schooling angelfish – a fancy fish condo, indeed.

More modest manmade “fish apartments” are springing up all over Indonesia in response to the shrinking acreage of natural reefs. Human depredations – chemical and sewage runoff, careless anchor setting, dynamiting fish or stunning them with cyanide – are killing the corals. A common national and local government response has been to build prosthetic reefs.

To invent manmade solutions, project managers must clearly specify the problems to be solved. Is it a matter of restoring commercial fish hauls? Long-term population sustainability?

Circumstances – and thus prosthetic solutions – vary widely from place to place. The Indonesian navy planted one million artificial reef seedlings this year as part of its “social obligation” to help with conservation. The fishery ministry’s conservation director boasts of reef projects in eight provinces. Telapak, a Bogor-based conservation and community advocacy organization, even proclaimed an annual “Coral Day” for reef planting. Ostenrik’s undersea longhouse was unveiled at one such event.

The enthusiasm for artificial reef systems is far from universal, though. Even as he dutifully gleaned coral bits for incorporation into the “Monster Fish Condo,” park guard Suastawa voiced doubts about the need for the project.

“Wakatobi has some of the healthiest coral in Indonesia,” he pointed out. A five-minute swim past the rubble pile where he was searching would reveal a reef wall pulsing with iridescent fish. 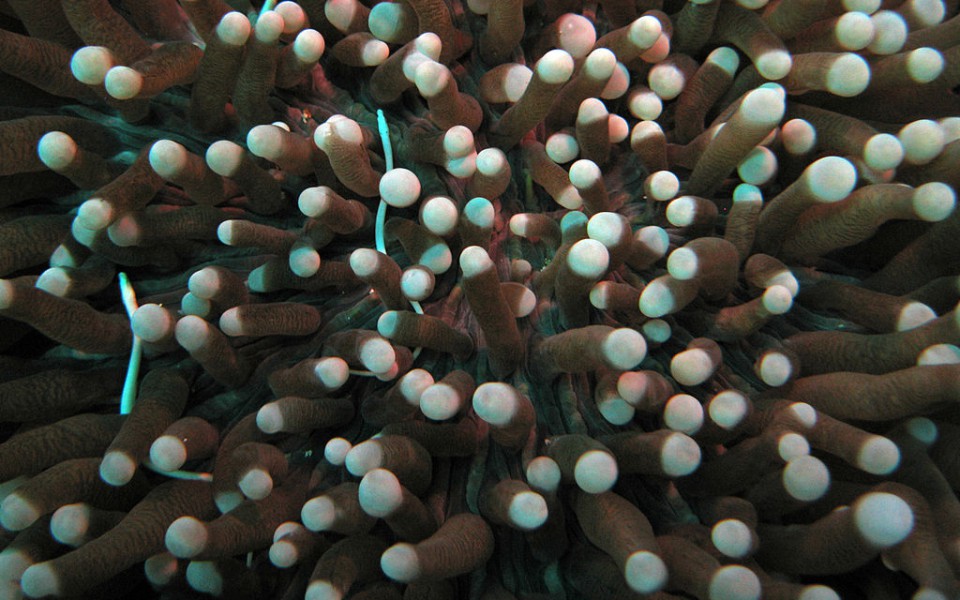 Professor Yvonne Sadovy at Chinese University of Hong Kong has studied grouper fisheries in Indonesia and elsewhere for decades. She wonders if artificial reefs might lure fish from healthy ecosystems, or act as signposts for human predators, announcing productive fishing grounds. The research on this topic is still sparse, but the topics deserve empirical investigation, she is convinced.

But, advocates like Safran Yusri, executive director of TERANGI (the Indonesian Coral Reef Foundation), maintain that artificial reef projects expand the amount of habitat available and stem the trauma on natural coral and sea creatures from fishing and tourism. “Juvenile fish are carried by waves,” Safran said. “If they are taken to unhealthy places they will die, so we need to increase the amount of space that animals can grow and add areas that can be colonized.”

Safran thinks there should be more focus on planting more species of coral to encourage a more varied coral landscape. “The easiest coral to grow is branching coral but not all fish species feed or hide in branching coral,” he reasoned.

Artificial reef building did get off to a rocky start in Indonesia. Back in the 1980s, then Jakarta Governor Wiyogo Atmodarminto tried to modernize the capital and restore local reefs all in one stroke. He ordered his police to round up all of the city’s becak (pedicabs) and throw them into the Jakarta Bay. This turned out to be a “terrible idea,” according to Suharsono, one of the country’s leading coral biologists and one-time head of the oceanography division at the Indonesian Institute of Sciences (LIPI). “The becak wheels broke down and ended up polluting the bay,” he lamented.

This misadventure, though, hasn’t cured the government of its penchant for scuttling random flotsam in the name of coral restoration. Indonesian fishery minister Susi Pudjiastuti has become well-known for sinking foreign fishing vessels caught operating illegally in Indonesian waters. The submerged vessels, according to the ministry, offer fish habitat. This might work, according to Suharsono, only if the sunken vessels are made of high-quality lumber. “Coral attaches to wood, but if it is cheap or thin wood, this will decay fast, stranding the polyps [baby coral].”

Using the wrong materials for reef building can carry unintended consequences. Suharsono is against the use of epoxy and paint, which leach toxins into the environment. But his biggest qualm is with fish aggregating devices (FADs), which emit sounds that attract fish. Many conservationists criticise the use of the beepers in offshore seine fisheries as giving fishermen an unfair advantage. FADs have been installed in the artificial reefs of Sumatra and West Java. “This seems like an invention more focused on gathering fish rather than rebuilding coral,” Suharsono said.

Most latter-day artificial reef building, however, comes with less collateral damage. The most popular model of prosthetic reef nowadays is a flat frame of plastic PVC piping or steel rebar. Coral polyps are planted at intervals on top of the frame.

Such structures are suited to calm coves or lagoons, said Safran, the TERANGI director. More turbulent conditions demand heavier or smaller structures more likely to stand crashing surf or sweeping currents. He cited such examples as Ecoreefs (rocks covered in spikes), the Reef Balls (hanging balls with holes in them) and Spiderfeet (structures made of iron rods and cement).

Then too, there is the question of price. Biorock is much more expensive to build and maintain than structures made from PVC piping and cement. Projects often happen near impoverished fishing communities and denuded habitat with few fish remaining. Cheap materials make it possible for local people to participate and also discourage stealing.

Also, to truly know the impact and effectiveness of artificial reefs, you need coral and fish stock assessments. But right now, aside from a handful of Biorock projects in the touristed sections of Bali and Lombok (Pulau Les, Pemuteran, Serangan in Teluk Nusa Dua, the Gili Islands), artificial reefs are rarely scrutinized past the first year of installation.

And this isn’t from a national dearth of knowledge, according to Suharsono, the coral biologist.“There are lots of young scientists coming up now who focus on the science of coral transplantation,” he said. Safran added that monitoring and maintenance can be done by locals too if public awareness of the importance of reefs is highlighted through initiatives like Coral Day.