Shrimp farms, industrial plants, and one of Indonesia’s busiest thoroughfares make up Java’s north coast today. It’s a very different scene from the fishing villages with beachfront boat parking that stood here decades earlier. Which begs the question, where will fish live in this new “coast without mangroves, without coral, without seagrass,” asks Alan Koropitan, a marine biologist based at Bogor Agricultural University (IPB)?

“Human development is what affects fish the most,” he says. “It is difficult to replant mangrove in these conditions; and once planted, it is hard to keep people from cutting them down.” However, Koropitan has a possible conservation solution fitting for an urbanizing coastline: “fish apartments.” 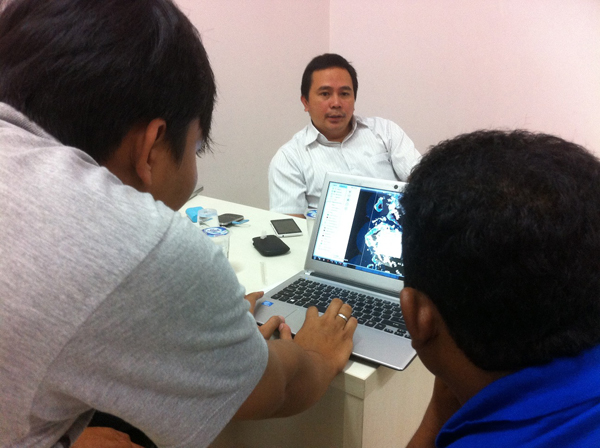 Marine biology professor Alan Koropitan (center) watches as a technician at Surya University explains the prototype for a live weather and wave forecasting system that north coast fishermen will soon be able to access by smartphone. Photo copyright © 2014 Melati Kaye.

“Usually fish are attracted by two kinds of forces, light and acoustics,” Koropitan explains. “At specific frequencies, fish feel comfortable…as if they are in a school of fish.”

Fully-serviced fish apartments are just one instance of how non-governmental outfits are addressing oceanic degradation on their own without waiting for the lumbering government bureaucracy to get around to it.

The initiatives are many and varied, ranging from rearing seahorses in coastal net pens to training rural authorities in Lombok and Flores to keep better records of fish landings. Projects come under the aegis of anything from a university department to an international non-profit to a village council or corporate responsibility scheme. With such an eclectic provenance, no wonder they vary widely in effectiveness.

For example, some South Sulawesi fishermen, recruited by Mars (not the Red Planet or the War God but the chocolatier), rear giant clams, clownfish, and seahorses at the University of Hasanuddin’s marine research station on Barang Lompo Island. The island, which lies 20 kilometers offshore of Makassar, is one of many in this area known for using homemade bombs and cyanide solution to catch fish, killing coral and distressing the larger ecosystem. The Hasanuddin hatchery hopes to stem these destructive practices by offering alternative livelihoods and restocking the local environment with fished-out species in the process.

“Fishing was okay but backbreaking,” says ST Syarifuddin while scrubbing down a cement tank full of flowerpot sized giant clams. “I prefer this work, it’s calmer.”

Soon he will hose down the tank and fill it with new sea water, letting the clams spread their shells to reveal iridescent blue lips. Working with the University, Syarifuddin has learned to distinguish and isolate sick seahorses from healthy ones, create conducive conditions for anemone fish to mate, and identify the life-cycle stages of the rare giant clam–all without ever having left his hometown. 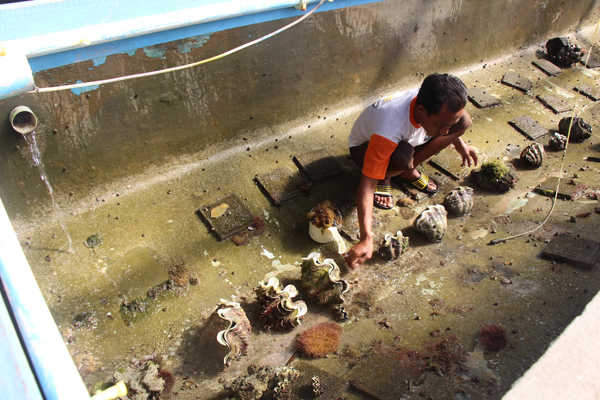 “We tend to think in terms of ‘hard’ technological solutions but we also need to look for ‘soft’ technologies like education and technical skills,” says Dewi Badawing, a Universitas Hasanuddin marine biology professor.

Various outfits including the local government and Mars, which ventured into mariculture to protect the feedstock for its pet food business, have supported the Barang Lompo facility. The university hatchery is a promising start, but currently employs only two out of hundreds of men on Barang Lompo.

Meanwhile, demand from American and European fish-eaters for sustainably sourced seafood is provoking a rethink of global supply chains. The Sustainable Fisheries Partnership, “a business-focused NGO,” works with large food corporations to shed light on opaque supply chains. SFP focuses on improving data on fisheries and encouraging companies to learn about “sustainable fisheries.”

In turn, Indonesian companies interested in accessing eco-conscious western markets consider Fishery Improvement Projects, in hopes that they will gain points with assessors for the internationally recognized Marine Stewardship Certification (MSC) program. These improvement projects are meant to bring state-of-the-art science and international sustainability standards to mismanaged, under-resourced fisheries in the developing world. But if the effort is to go beyond increasing monitoring capacity into actually improving sustainability, it will mean convincing government officials, industry heads, and fishermen to swallow such unpalatable solutions as reducing catch sizes or stopping fishing altogether for a period.

Many experts insist catching less fish is the only way to return Indonesia’s wild-caught fisheries to any semblance of sustainability. And this pits environmental sustainability against livelihood and profits in a common dilemma for sustainable trade initiatives. If the sustainability measures do not yield quick or sufficient enough economic gains, they will likely not stick. But the alternative could also be the complete collapse of a fishery.

Meanwhile, Koropitan and his team at IPB are getting ready to bring the prospect of building fish apartments before local government regulatory committees. 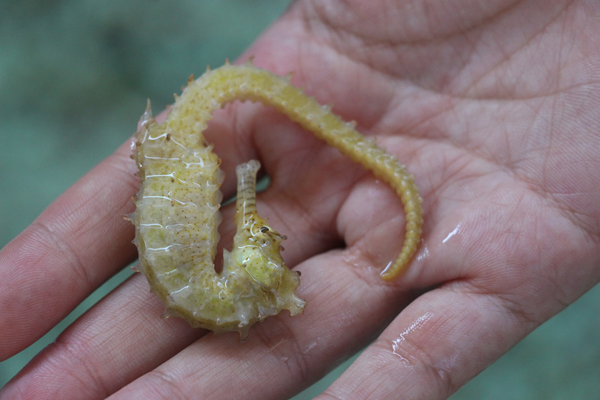 There is no data yet on the long-term effects of the offshore apartments on fish populations or local ecosystems. However, a number and variety of fish are attracted to the “apartments,” according to four months of daily observations by one of Koropitan’s team, Roza Yusfindayani, at a test site on the West Java coast.

Rabbit fish hung out at the cement apartments feasting on buffets of zooplankton thanks to phytoplankton blooms grown off the highly nutritious shore delta waters. Squid laid eggs. Remoras cleaned themselves against the metal piping. And tuna schooled.

In addition, the apartments ensure exclusive fishing rights to the local community in both fair and foul weather. The foundations of the apartments tear the nets of passing trawlers trying to poach fish. And “when there is bad weather, fishermen don’t have to go four miles out to sea anymore,” Koropitan enthuses. “These structures also allow fishermen to be more selective, they go and scan for what is available and leave the juveniles.”

While all of these projects are pioneering, they are still “experiments.” For them to “scale up” to a national level, they will likely have to involve the government. Koropitan–an advisor for the State Ministry of National Planning–attempted to add the building of fish apartments to the blueprint of coastal development plans nationwide. The concept was rejected on the grounds of being too “technical,” but Koropitan is optimistic about adding it to regional “strategies.”

At just two percent of Indonesia’s gross domestic product, fisheries and aquaculture currently make only a minor contribution to the national economy. However two-thirds of the nation’s 200 million people live on the coast. Many of these, often at the lower end of income distribution, derive their protein and much of their livelihood from the oceans. Indonesia’s marine waters are also located at the heart of the Coral Triangle, a region home to at least 600 coral species and 2,000 reef fish species.

Despite its ecological and social importance, Indonesia’s fisheries have long been neglected by the government. Barely half the fish caught in major ports are reported. Fishermen illegally using bombs and cyanide to land their catch are rarely tried for violations, instead getting away with pre-trial jail time or bribes.

Yet millions of Indonesians increasingly resort to such short-cuts to support their families using their most readily available resource: the open-access fishery at their doorstep. At a couple dollars a kilogram for dead fish and as much as $30 a kilogram for live fish, they strive for the more upscale lifestyles they see on TV.

This unchecked fishing is not only ecologically destructive, but also shortsighted, undermining the long-term resources on which coastal communities rely. To stop the damage, experts say Indonesia needs to control the rate at which fish populations are depleted.

That need not mean a draconian stop to all fishing, but fish harvests should be regulated both geographically, through “no-take zones,” and temporally, with bans on fishing during each species’ spawning season. And once regulated, the law needs to be enforced.

But, for this to work, communities must feel that they have a stake in a better-regulated fishery. Local notables can be recruited into enforcement efforts and rewarded for their contributions. Poor coastal populations also need to be shown a path out of an overreliance on dwindling fisheries. Better health and education services would help. So might an array of alternative livelihoods such as ecotourism and the farming of certain ornamental fish. None of these, though, should be treated as a silver bullet on its own.