by Ethan Harfenist on 3 December 2015

This is the second in a two-part series. Read the first part here.

In 2010, governments agreed that global warming needed to be kept below a 2 degree Celsius temperature change by 2020 to avert climate catastrophe. As another round of UN Climate talks kicked off in Paris this week, a new study has asserted that reducing tropical deforestation in half by 2020 would greatly reduce the planet’s rising temperature. It puts forth two ways to meet this goal, using Brazil to light the way forward.

Cutting that amount in half may be a tall order, but the authors – who hail from research institutions around the world – are cautiously optimistic in their paper published this week in Global Change Biology.

“Halving emissions from deforestation is achievable,” said Nancy Harris, a co-author of the report and research manager for Global Forest Watch at the World Resources Institute (WRI), in a statement. “But first you need robust, transparent and evidence-based benchmarks against which to measure progress. New satellite-based data, published in this paper and publicly available online, gives us that necessary starting point.”

The study finds that Brazil was responsible for the lion’s share of tropical deforestation-caused emissions, releasing an average of 1,066 million metric tons of carbon into the atmosphere between 2001 and 2013 – nearly 47 percent of the global load. However, the authors point that the country’s huge gains in reducing deforestation has scaled back their emissions over the years. From 2004 to 2009, Brazil reduced its gross carbon emissions from 1,060 million metric tons to 482 million metric tons, a spectacular achievement considering the performance of other global players.

“Nowhere else has a single country reduced emissions by over a billion tons of carbon annually in just a few years,” said report lead author Daniel Zarin in a statement. “But that’s the scale at which Brazil cut emissions from deforestation between 2004 and 2009. Unfortunately, much of that has been offset by other tropical countries deforesting more.”

Zarin said that in total, Brazil’s reduced its deforestation in the Amazon by nearly 80 percent while simultaneously increasing agricultural production in the region. A separate study equated the emissions saved by this drop to taking all the cars of U.S. roads for three years.

While Brazil is not a signatory to the New York Declaration on Forests (NYDF), the study considers Brazil “critical to any scenario” that involves carbon reduction with regard to tropical deforestation. The study also applauds Brazil’s combination of public policy reforms, law enforcement and voluntary private sector actions as responsible for Brazil’s success. 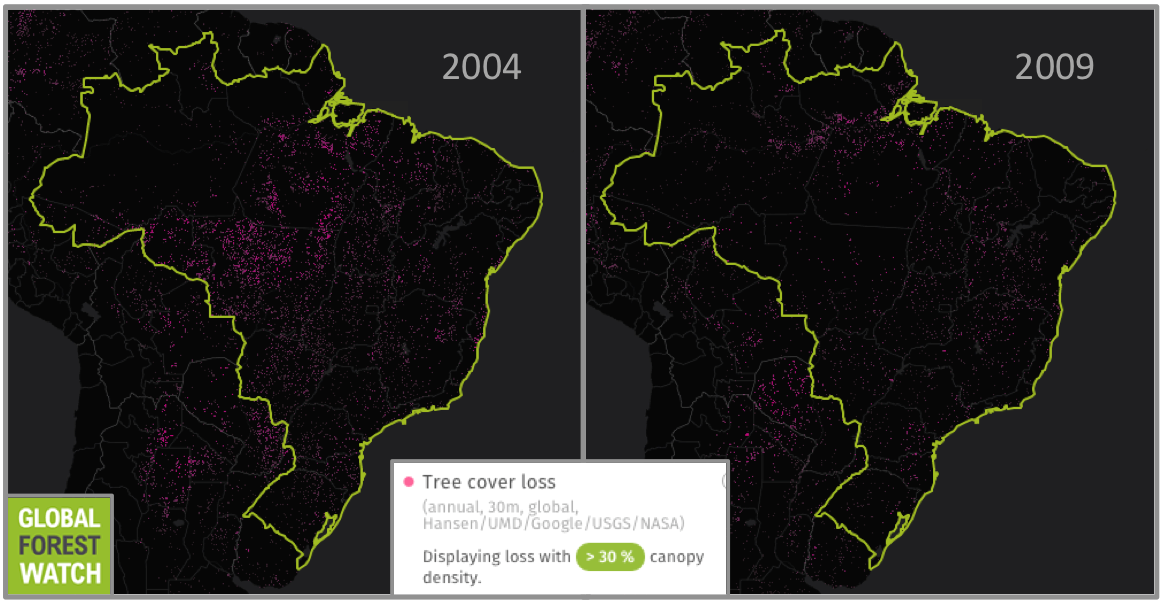 Specifically, Zarin said, Brazil successfully fought deforestation by creating protected areas, stripping away certain rights from companies and allocating land rights to indigenous peoples. However, he added that while Brazil’s case is particularly successful, it can’t be considered a one-size-fits-all approach.

“There are elements of the Brazilian model applicable elsewhere, he said “We’re not saying the whole thing can be applied everywhere. But the focus on transparency, public policy and voluntary efforts … are things that will be relevant [elsewhere].”

Indonesia: on track to be one of the year’s biggest emitters

Those numbers are set to rise drastically this year with Indonesia’s forest fire disaster, which devastated millions of hectares of land and caused a grave public health crisis, adding more greenhouse gases to the atmosphere than all of Japan’s emissions for an entire year. Factoring this in may put Indonesia ahead of Brazil – and even the U.S. – making Indonesia one of the largest carbon emitters of the year.

There are key differences between Brazil and Indonesia when it comes to land use regulation, according to the authors. For instance, the Indonesian government concession granting overrides the private sector, and the country has done less to formally recognize indigenous land rights. However, there are efforts underway aimed at reducing deforestation.

“Earlier this year, Indonesia’s president extended a moratorium of new licenses on peat and primary forest to reduce deforestation, and recently called for all new peatland development to immediately cease while all exiting licenses on peatland are reviewed,” said study co-author Belinda A. Margono in a statement. “The government plans to implement a major peatland restoration effort in an attempt to ensure that the conditions that allowed for this year’s catastrophic fires do not arise in the future.”

Two possible paths to the 2020 goal

“The first scenario is a lot harder for a lot of the world’s poorest countries to achieve,” co-author Tasso Azevedo said in a statement. “The second scenario is very plausible for Brazil. We need to build on the success of the past decade and really capitalize on the huge potential to intensify agricultural production on lands that have already been cleared rather than cutting down forests. Brazilian scientists know how to do this.”

Zarin admitted that it would be hard to achieve this goal by 2020, but said it was still doable with the right tools and mindset.

“The general message overall is that there is progress, things are moving overall in the right direction, but it’s not fast enough,” he said. “We need to accelerate progress.”

Zarin added that the Paris talks, with 190 countries involved, would make it difficult to achieve anything concrete. He believes the takeaway message should be that countries must look at development in a new, conservation-minded way.