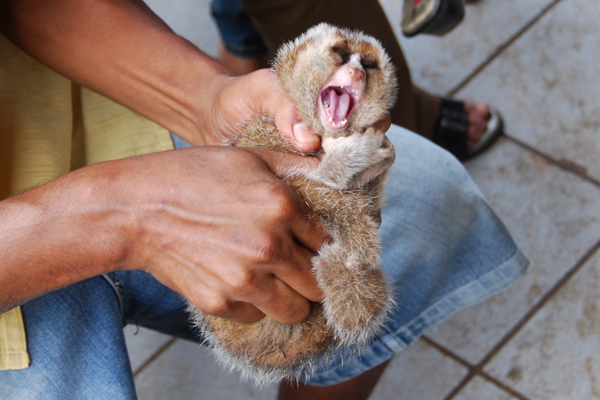 Have you seen a video where a slow loris—a small, cute, big-eyed primate from Asian rainforests—gets tickled?

Here’s the real story of how that slow loris got there. It was stolen from the wild by poachers, who probably took it from its mother—after killing her. Then its teeth were torn out with pliers and without anesthetic, a procedure many stolen slow lorises don’t survive. Finally the people tickling their slow loris are not giving it pleasure—far from it. Actually when tickled the slow loris raises its arms in self-defense as it tries to reach the venom glands in its armpits to defend itself against its ‘owner.’ A new campaign from International Animal Rescue, dubbed Tickling is TORTURE is working to expose the cruel realties of a pet trade that is also pushing the world’s slow loris species toward extinction.

“Unspeakable cruelty is involved in the trade in slow lorises and the public must be made aware of this,” said Phily Kennington, the head of the campaign. He added that life as a pet was “inherently cruel” for these nocturnal, shy animals.

“Slow lorises travel long distances at night in their hunt for food. They feed on crickets and other live insects, as well as birds’ eggs, fruit and the sap of certain trees. YouTube videos show pet lorises eating rice balls and other unsuitable food, so it’s no surprise that most of them are malnourished and suffering from serious health problems.”

Yet, the idea that slow lorises are somehow cute animals suitable to life as a pet has been exacerbated by a number of celebrities, according to Kennington.

“Rihanna recently posted a selfie of herself holding a slow loris and Lady Gaga was intending to use one as a prop in her music video until it bit her—undoubtedly because it wasn’t happy being handled and was trying to protect itself,” said Kennington. “Using lorises in this way sends out entirely the wrong message—that it’s ok to keep them in captivity and handle them like a domestic pet.”

Currently the IUCN Red List recognizes five species of slow loris–though scientists have proposed eight. Of these five, four are listed as Vulnerable and one—the Javan slow loris (Nycticebus javanicus)—is listed as Critically Endangered. Conservationists say the pet trade is one of the biggest threats to these animals, which are also imperiled by deforestation, fragmentation and killing for traditional medicines.

The International Animal Rescue has started a petition where one can pledge to not share slow loris pet videos, but instead direct people to an information page about the realities of the illegal pet trade for these endangered primates.