Renowned biologist E.O Wilson, assessing Earth’s sixth great extinction now underway, described the future as a shrinking keyhole through which all species must pass as humanity responds to, and hopefully averts catastrophe. A new study published in the journal Science shows that this keyhole could drastically narrow with each degree increase in global temperature due to climate change.

The comprehensive study by University of Connecticut ecologist Mark Urban synthesizes data from 131 published papers that estimated extinction risks for groups of plant and animal species worldwide. Urban concludes that “The future global extinction risk from climate change is predicted not only to increase but to accelerate as global temperatures rise.”

His study found that global extinction risks increase from 2.8 percent at present to 5.2 percent with a post-industrial warming of 2°C (3.6°F) — an international policy target most experts now believe we will overshoot. If the Earth warms by 3°C (5.4°F), the extinction risk rises to 8.5 percent. If we follow our current, business-as-usual trajectory of a 4.3 C (7.75°F) rise, then one in six species (16 percent) could go extinct.

This business-as-usual extinction rate varies region to region. North America and Europe have the lowest estimated risks (5 and 6 percent, respectively), while South America (23 percent) and Australia and New Zealand (14 percent) have the highest risks, says the study. The significantly higher projected extinctions are due to several factors: these regions face new climates for which there is no historical comparison, they “harbor diverse assemblages of endemic species with small ranges” and they have “small land masses that limit shifts to new habitat.” 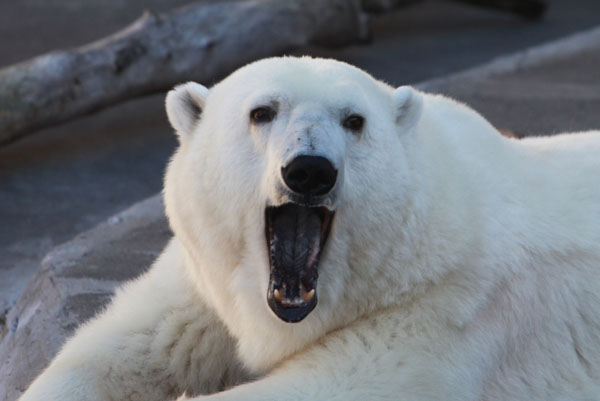 A polar bear in captivity. Photo by Rhett A. Butler / mongabay.com

Calculating the biological cost of humanity’s failure to curb climate change is extremely challenging. Past global warming extinction estimates diverge very widely, falling anywhere between zero and 54 percent, depending on criteria used. The new study could be more robust that others because of its meta-analysis of a large body of work, and because it evaluated many variables, including how “extinction risk varied depending on future global temperature increases, taxonomic groups, geographic regions, endemism, modeling techniques, dispersal assumptions, and extinction thresholds.”

Urban warns that poorly studied regions could face higher risks, but data is lacking. Just four past studies, for example, looked at extinction risks in Asia, while more than 60 percent of the studies evaluated looked at North America and Europe. This disparity suggests an urgent need to focus research efforts on less studied, more threatened regions.

It also suggests that we may be seriously underestimating future extinction risks, since biodiversity is often greater in the tropics where far fewer studies have been done. Urban’s paper also doesn’t factor in all the other pressures on wild species – ranging from habitat loss and fragmentation due to agriculture and development, to pollution, invasive species, hunting and more. Add to that global warming mechanisms and impacts science may have yet to identify, or the possibility of abrupt climate shocks, such as unforeseen mega-droughts or super storms, or worse, tipping points where entire ecosystems or biomes collapse, and the percentage of extinctions could shoot upward. Modeling so many chaotic variables and unknowns could be virtually impossible.

The study also cautions that the number of species at risk for extinction is far smaller than the number affected by climate change: “Even species not threatened directly by extinction could experience substantial changes in abundances, distributions, and species interactions, which in turn could affect ecosystems and their services to humans.”

Species extinctions due to global warming, although still uncommon, are increasing. The world, writes Urban, is reaching a threshold where we can clearly begin to see the effects on biodiversity. “Extinction risks from climate change are expected not only to increase but to accelerate for every degree rise in global temperatures,” the study concludes. “The signal of climate change-induced extinctions will become increasingly apparent if we do not act now to limit future climate change.”