With fewer than 100 individuals alive and dropping fast, the vaquita porpoise is just a swish of the tail away from extinction. In April, alerted by scientists that the vaquita population had recently suffered its biggest decline ever, the Mexican government announced an emergency two-year ban on gillnet fishing across the porpoise’s main habitat in the upper Gulf of California. A frenzied race to fish for another critically endangered species, the totoaba, is behind the plummeting porpoise numbers. by Rebecca Kessler on 29 May 2015 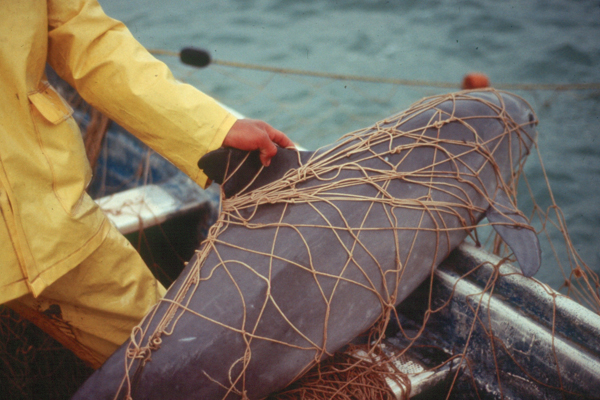 A fisherman hauls up a critically endangered vaquita porpoise accidentally entangled in his net in 2008. Entanglement in fishing gear threatens the species with extinction. Photo credit: Omar Vidal.

With fewer than 100 individuals alive and dropping fast, the vaquita porpoise is just a swish of the tail away from extinction. In April, alerted by scientists that the vaquita population had recently suffered its biggest decline ever, the Mexican government announced an emergency two-year ban on gillnet fishing across the porpoise’s main habitat in the upper Gulf of California. A frenzied race to fish for another critically endangered species, the totoaba, is behind the plummeting porpoise numbers.

The critically endangered vaquita (Phocoena sinus) is among the world’s most endangered mammals. Measuring under five feet long and weighing up to 120 pounds, it is the world’s smallest cetacean, and it occupies the smallest range. Nearly the entire population lives within 1,500 square miles in the northernmost Gulf of California — a region where fishing is the economic mainstay. More often than not, the animals reveal themselves to human eyes only when they are hauled up dead after becoming fatally entangled in gillnets. Fishing gear has been recognized for years as the biggest threat to the porpoise’s survival.

To protect the vaquita, the Mexican government banned gillnet fishing in a small area near the mouth of the Colorado River in 1993, and established an additional vaquita refuge area in 2005. Then in 2008 it laid out a comprehensive conservation action plan for the species that promised increased enforcement of gillnet bans, supported the development of alternative fishing gear, and provided compensation, buy-outs, and retraining for fishermen.

But enforcement remained lax and between 2011 and 2013, scientists documented worrisome population declines of 18.5 percent per year. In July 2014, when the most recent estimate was made, the entire species was down to just under 100 animals, according to the two scientists co-leading scientific assessment of the vaquita, Lorenzo Rojas-Bracho, coordinator for Mexico’s national Marine Mammal Research and Conservation Program, and Barbara Taylor, head of the Marine Mammal Genetics Group at the National Oceanic and Atmospheric Administration’s Southwest Fisheries Science Center in La Jolla, California.

Now, however, acoustic monitoring data suggest an even sharper population drop took place over the last year, Rojas-Bracho and Taylor told mongabay.com. The pair declined to pinpoint how many vaquitas they believe remain alive until they complete boat-based surveys this fall, but Taylor said the number was now certainly “way less than 100.”

The pair attribute the sharp drop largely to what Rojas-Bracho called a “fever to fish totoaba.” The Mexican government banned all fishing for totoaba (Totoaba macdonaldi) in 1975, but illegal fishing persists. Swim bladders of the critically endangered fish are prized in China, apparently as a prestigious gift in business circles, with purported medical value. In Mexico, prices until last year were as high as $8,500 per kilogram (2.2 pounds) of swim bladder, though they have since declined to the still-eye-popping price of $5,000 per kilogram, Rojas-Bracho said.

“Everybody was fishing everywhere and wherever they wanted. So this seems to be bad news for the population size of the vaquita,” he said, adding that one owner of several fishing pangas reported that she could not get anyone to work for her during the lucrative shrimp season because everybody was busy illegally fishing for totoaba.

From Mexico, the bladders are typically smuggled into the U.S., and from there to Hong Kong and mainland China, according to a report released this week by the conservation group Greenpeace. The report describes the group’s recent investigation of the totoaba trade in Hong Kong. It highlights the ease with which smugglers move totaba swim bladders across the Mexican, U.S., and Chinese borders and the lack of enforcement by Hong Kong customs in particular. While the investigation documented prices as high as $31,000 for a piece of totaba swim bladder weighing less than 13 ounces, it also found that prices had dipped in the last year as supplies increased from all the fishing in the vaquita’s home waters. 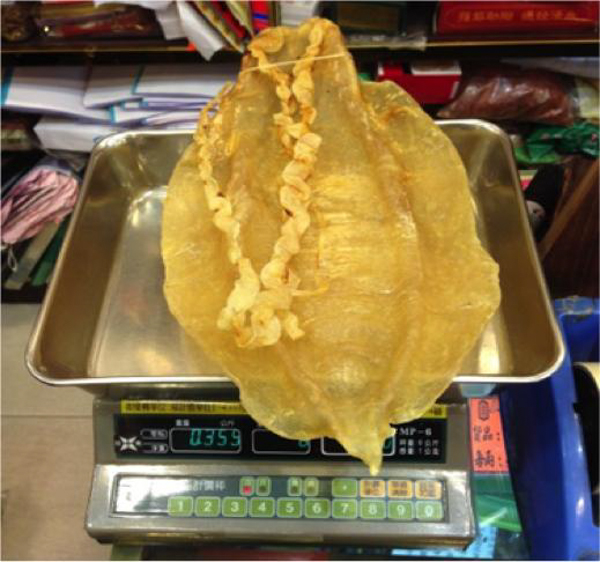 Mexico’s new blanket ban on gillnet fishing comes after decades of urging from scientists and conservationists. It covers 13,000 square kilometers (5,019 square miles) in the northern Gulf of California, approximately two-thirds of which is now protected for the first time. And there are signs that the Mexican government is serious about enforcing it.

Previously, detention of illegal fishers was carried out jointly by park rangers with the Federal Attorney for Environmental Protection (PROFEPA), who do not have the authority to enforce fishing regulations, and by agents with the National Commission of Aquaculture and Fishing (CONAPESCA), who do. This has contributed to confusion and ineffective enforcement, Taylor said.

In addition, fishermen reported that bribery of enforcement officers was commonplace, and an influx of guns and drug running has made the area extremely dangerous for enforcement officers. “If you’re an enforcement person and you’re approaching a panga with a pile of nets, you don’t know what you’re going to find,” Taylor said. “It’s been a relatively scary and lawless area for some time.”

Now, the Mexican navy has been placed in charge of a team of federal agencies tasked with enforcing the new ban that includes the army, the federal police, and the attorney general of the republic, as well as PROFEPA and CONAPESCA.

People simply trust the navy more to enforce the law, Rojas-Bracho said, and many fishermen welcome the new measures.

“Of course there are fishermen who are making an amazing amount of money by doing illegal activities and they aren’t going to like enforcement,” Taylor said. “But there are a lot of fishermen who are seeing the social problems that are caused by illegal activities in their towns that are welcoming enforcement and are being very vocal about saying that they don’t want to be the ones that are branded with making a species go extinct—or two species, both totoaba and vaquita.”

Within days of the gillnetting ban going into force, the navy and PROFEPA used a new high-speed Defender boat to arrest two people who were fishing in the protected area and were caught with a totoaba in their boat, the local paper El Sol de Toluca reported. Then, earlier this month, navy officers opened fire on two fishermen catching totoaba in the protected area after they fled in their panga and refused to stop, the paper La Voz de la Frontera reported. One of the fishermen was shot and taken to a navy health post in the area’s main fishing town of San Felipe for treatment. 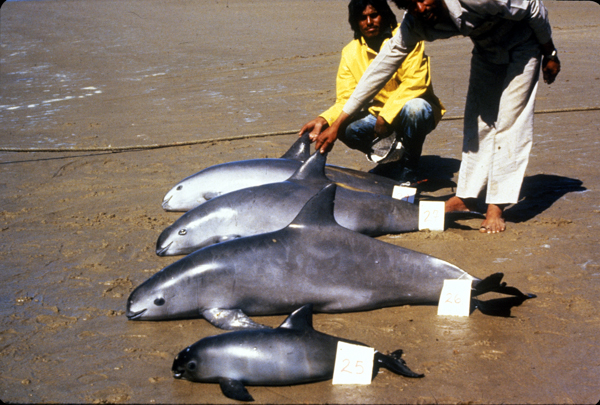 “It’s a sad thing. It’s not something that we’re happy [about] in any way. But illegal fishing has been the norm in that area. And in a way, as sad as it is, this is a very strong signal to the community that things are changing,” Rojas-Bracho said. He added that it remains to be seen how severe the penalties for the fishermen will be.

Further beefing up enforcement, the government has been testing drones to spot illegal fishers, according to news reports. And the conservation group Sea Shepherd announced a partnership with Mexican government agencies to station a sailboat in the area that will help with surveillance.

Even if the two-year fishing ban is effective, it will take much longer for the vaquita population to recover to stable levels. “You can have a population decline of 50 percent in one year, but even if the vaquita are doing extremely well, the fastest they can grow is at 4 percent a year,” Taylor said.

By definition emergency fishing closures can only last two years in Mexico, but a permanent ban is being considered, she said. The new measures also include compensation and retraining for fishermen and money for the development of alternative, vaquita-safe fishing gear. New gear has already been developed for the region’s lucrative fishery for shrimp, 80 percent of which is exported to the U.S. The shrimp gear still needs improving, Rojas-Bracho said, and gear for finfish must now be created from scratch.

Mexico should get a lot of credit for enacting the new measures, considering that gillnets entangle and kill hundreds of thousands of porpoises and dolphins every year around the globe in what has become a stubborn problem, Taylor said. “Mexico’s taken an enormous step in being the first example of… a government that’s willing to say ‘All right. We’re going to take this problem on,'” she said. “So, kudos to them.”

While praising the Mexican government’s actions, Greenpeace said in a press release that the temporary ban on gillnetting would solve only part of the problem. “The Mexican government’s initiatives are positive, but they are not enough. The high value of the totoaba in the black market and the fact that organized crime is involved in fishing and trafficking make the fight against illegal fishing much more complicated,” said Silvia Díaz, Greenpeace Mexico’s Oceans Program Manager, in the statement. “The US and Chinese governments must also take strong action to permanently eliminate totoaba trafficking and consumption.” 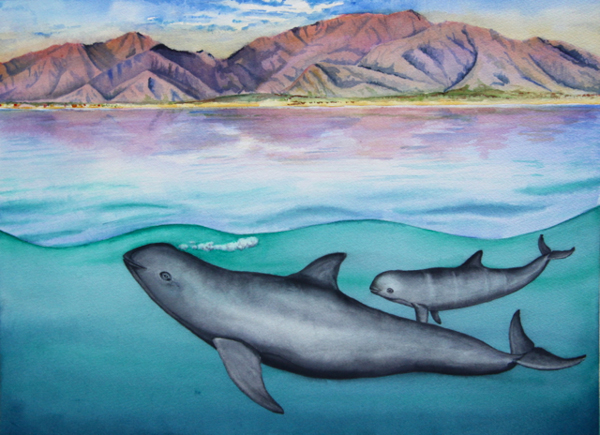 A vaquita mother and calf swim off San Felipe, Mexico, in happier days in this painting by Barbara Taylor of NOAA, who co-leads scientific assessment of the species. Credit: Barbara Taylor.

Nevertheless, even Rojas-Bracho and Taylor aren’t ready to bet against the vaquita. They pointed to the example of northern elephant seals (Mirounga angustirostris), which in the 1900s dipped below 100 animals. But starting with Mexico’s protection of the seals’ last remaining outpost, they made a strong recovery and now number at least 200,000 animals ranging as far north as Alaska.

As for the vaquita, Taylor said, “They have, I think, every potential for recovering. But of course the lower and lower you go, the higher and higher the risk gets.”