by Mrinalini Erkenswick Watsa on 28 May 2015

On the border of Colombia and Venezuela lies a mountain range called Serranía de Perijá in which a small brown songbird is going about its day entirely unaware of what a stir it has just created in the world of ornithology. For many years, study skins of the bird languished in a dusty drawer in the Smithsonian Institution National Museum of Natural History, classified hurriedly (and erroneously,) as Scytalopus atratus nigricans, a similar songbird found at lower elevations. Recently, scientists rediscovered the bird on the Venezuelan slopes of the Perijá Mountains, and were able to use twenty-first century techniques to describe its genetics, ecology and appearance. In doing so, they identified it as a new species, which they call the Perijá tapaculo (Scytalopus perijanus).

Melbourne Carriker Jr. could be credited with the original scientific discovery of this species. He was a native of Illinois who presented his first paper on the nesting habits of raptors by the age of 20. Three years later he went on his first collecting trip to Costa Rica, developing into a skilled ornithologist and entomologist with a penchant for studying parasitic lice in birds. In 1941 and 1942, he collected extensively in Colombia, exploring the western slopes of the Serranía de Perijá Mountains, and sending 27 tapaculo specimens from six localities to the Smithsonian. After undergoing a brief inspection, these remained unstudied for 70 long years, much like tapaculos in general.

Then, in September 2006, Juan Pablo López of the Instituto de Ciencias Naturales (National University of Colombia) and Alexander Cortés-Diago (Fundacion EcoHabitats) collected two specimens of Scytalopus in cloud forests at 2,450 meters above sea level, on the western slopes of the Serranía de Perijá. Despite their suspicions that these two birds were new to science, no comparative specimens existed at the time to launch a full study.
Later, in 2008, Jorge Avendaño of the Universidad de los Llanos and his colleagues collected a further 16 specimens of tapaculos in a time-series, from the same area explored by Carriker, and noted similarities between Carriker’s collections and their own. Carriker’s specimens did not have the diagnostic traits of the northern species of tapaculo to which they were attributed (Scylatopus atratus nigricans), including size, color patterns, and a white patch on the middle of the head. These were also absent in the bird specimens they had just collected.

Concluding that this was indeed a new species, they published a full species description in the March 2015 volume of The Auk.

Perijá’s tapaculo is a small bird with a buff belly, gray back, and brown neck. Its songs and calls are quite different than those of other tapaculos. Avedaño and colleagues encountered a nest two meters from a dirt road, with a protective male hovering over two chicks that called lustily, sounding very much like crickets. Avedaño believes that males participate in parental care, which is not uncommon in tapaculos, and that the species breeds primarily from April to July.

“While it was known that two species occurred in the Perijá mountains, it was a distinct surprise that the upper elevational form differs as much as 8-9% from its closest relatives,” said tapaculo expert Niels Krabbe in a press release. “This emphasizes the importance of the Perijá Mountains as an evolutionary center, and calls for further studies of its flora and fauna.”

But are they safe?

The genus Scylatopus, after receiving very little attention for so long, is at long-last being considered seriously by ornithologists. At least 28 species of Scytalopus outside of Brazil have been described or reclassified in the last 20 years alone, suggesting the possibility of new and undescribed tapaculos still present at these remote sites. The typically mountainous regions occupied by these birds are subject to habitat degradation on lower elevation slopes, trapping species on mountain-tops. Although tapaculos can relocate to some extent – unlike many terrestrial mammals or amphibians faced with similar isolation – habitat options are few and far between even for them, and continually diminishing.

The authors report that although the Perijá tapaculo could tolerate some level of landscape fragmentation, their assessment qualifies it for a status of Endangered under the IUCN criteria. The authors predict that its already fragmented and limited range of approximately 5,000 square kilometers will continue to decline in both extent and quality.

The mountain range of Serraniá de Perijá is known for its high endemism, or characteristic of possessing many species that are found nowhere else in the world. There, 60 avian species have been identified local to the site, with more that as-yet lack formal scientific descriptions. Together with the 69 species of endemic vascular plants, this makes Serranía de Perijá a veritable hotspot of evolutionary activity and in need of both further investigation and protection, scientists argue. 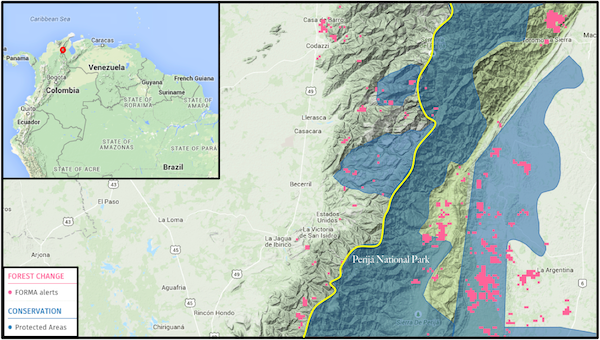 The border between Colombia and Venezuela (yellow) runs through the middle of the Serraniá de Perijá, where the Perijá tapaculo lives. Perijá National Park occupies much of the Venezuelan part of the range, but the Colombian side lacks such protections. According to Global Forest Watch, approximately 500 FORMA alerts – which indicate areas of probable tree cover loss – occurred between 2006 and 2015 in the portion of the range shown, which comprises the park. While the alerts were split somewhat equally between the two countries, most occurred outside of protected areas, with only 61 in Perijá National Park. It should be noted that the lowland protected area to the right of the national park was not included in this analysis. Click to enlarge.

“The species is more seriously threatened on the Colombian slope than on the Venezuelan slope because its habitat is protected by a large National Park in Venezuela,” explained Dr. Avendaño in a press release, referring to the Venezuelan Perijá National Park.

This might be quite difficult to achieve, however, as political turmoil in Colombia overshadows conservation issues. The Colombian Conflict is 51-year, ongoing, low-intensity war between the Colombian government and various paramilitary groups over increased influence in the country. A study by Colombia’s National Center of Historical Memory revealed that it has cost more than 220,000 human lives, mostly civilian, and has displaced more than five million people from their homes – the second-largest internally displaced population in the world. The Perijá tapaculos share their range with two blocs of a Colombian guerrilla group – the Caribbean and the Middle Magdalena blocs of the Fuerzas Armadas Revolucionarias de Colombia—Ejército del Pueblo (FARC–EP), making scientific forays into the region dangerous.

“So, we recommend establishing a new national park or a network of reserves in Colombia connected to the Sierra de Perijá National Park of Venezuela,” the authors write. “This binational park is necessary in order to effectively preserve the high species diversity and endemism of birds and other biological groups of the region.”