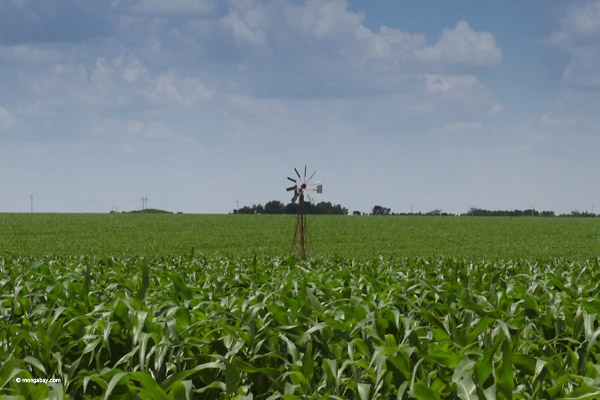 A cornfield stretches as far as the eye can see. Photo by Rhett A. Butler.

Corn and soybean cultivation soared in the late 2000s, as U.S. agribusiness rushed to respond to federal legislation rewarding biofuels production. Debate since the institution of the program has centered on the question of whether biofuel crop expansions have come at the expense of plowed-under biodiverse grasslands and prairie ecosystems.

The study is the first comprehensive analysis of U.S. land-use change between 2008 and 2012, the critical time period following the institution of the federal Renewable Fuel Standard (RFS) program, which generated America’s biofuel boom.

Crops, including corn and soy commonly used for biofuels, expanded onto 7 million acres of new land in the U.S. between 2008 and 2012, replacing millions of acres of grasslands, according to University of Wisconsin-Madison researchers Tyler Lark, J. Meghan Salmon and Holly Gibbs.

Grasslands host diverse species, ranging from bobolinks to the greater sage grouse and black-footed ferret. They also store large amounts of carbon in their soils, as a buffer against climate change. Yet, the researchers found nearly 80 percent of cropland expansion over the study’s four year period replaced grasslands, including 1.6 million acres of undisturbed natural grassland equivalent in area to the state of Delaware.

Nearly a quarter of all the natural land converted for crop production came from long-standing prairies and ranges, much of it within the Central Plains from North Dakota to Texas. This so-called biofuels gold rush “mimics the extreme land-use change that led up to the Dust Bowl in the 1930s,” said lead researcher Tyler Lark. Because most of this new cropland was planted with corn that may ultimately fill our gas tanks, he added, “We could be, in a sense, plowing up prairies with each mile we drive.”

The conversion from natural lands to corn and soy also exacerbated climate change by emitting as much carbon dioxide into the atmosphere as 34 coal-fired power plants operating for one year — the equivalent of 28 million more cars on the road.

Most of the new croplands were also developed on marginal natural lands unsuited for agriculture, and often prone to heightened risk of erosion, flooding and drought.

“There could be severe environmental consequences for bringing this land into crop production,” Lark said.

The scientists hope their findings will help guide policymakers and Congress in the debate over whether to reform or repeal parts of the RFS, which requires blending of gasoline with biofuels that are supposed to be grown only on pre-existing cropland, in order to minimize land-use change and greenhouse gas emissions.

The study discovered an RFS program loophole big enough to drive a tractor through: the researchers found that 3.5 million acres of corn and soy was produced on new, rather than pre-existing, cropland, rendering it ineligible for renewable fuel production under the RFS standard. However, this went undetected due to inadequate federal monitoring of land-use conversion. It is unknown to what degree agribusiness claimed renewable credits for ineligible biofuel crops grown on natural lands converted since 2007.

Lark recommends improved RFS monitoring, mapping and tracking. It would, for example, “be possible to use our raw data to identify locations of prairie and other ineligible natural lands converted to croplands, and those could then be investigated as likely locations entering the biofuel supply chain and being credited as renewable feed stock,” he said in a mongabay.com interview. The current problem with the federal monitoring system he said is that “it only looks at land use on the national level. That really misses the finer scale, high resolution land use changes that are occurring.”

The new study utilized high-resolution satellite imagery data collected over the last four decades by the U.S. Department of Agriculture and U.S. Geological Survey. The researchers identified where land had been converted to cropland, and the extent and nature of the conversion — whether, for example, wetlands were planted with soy, or grasslands were turned into cornfields.

The researchers also recommend expanding the geographic scope of a successful federal program, the Sodsaver provision of the 2014 Farm Bill. This policy reduces federal subsidies to farmers who grow on previously uncultivated land, but it now applies in only six Northern Plains states. The findings suggest a nationwide Sodsaver program is needed to protect remaining native ecosystems, since roughly two-thirds of new cropland conversions occurred outside the six current Sodsaver states.

In February 2015, lead researcher Lark presented the team’s findings to the U.S. Environmental Protection Agency and White House Office of Management and Budget, which share responsibility for rulemaking and review of changes to the RFS.

Fellow researcher Holly Gibbs, a professor in the University of Wisconsin-Madison Nelson Institute Center for Sustainability and the Global Environment, said that the study’s conclusions provide an opportunity to address shortcomings in existing U.S. biofuels policies while facilitating a more climate-friendly approach to biofuels.

“By closing the gaps in the existing Sodsaver and RFS, we could better protect our nation’s grasslands and prairies,” Gibbs said.