Russia and Canada lead the world in forest loss in 2013

Russia and Canada led the world in forest loss, accounting for nearly forty percent of the 18 million hectares of forest lost globally in 2013, reveals a new analysis based on high resolution satellite imagery.

The research — released today on Global Forest Watch, a forest monitoring and research platform — was led by Matt Hansen of the University of Maryland and involved Google, World Resources Institute (WRI), and other institutions.

The findings indicate that the global forest crisis is far from solved — global forest loss has in fact increased by nearly a third since the early 2000s. Loss in boreal regions has increased at the fastest pace, rising by nearly 50 percent over the past 13 years. Loss in Russia and Canada alone amounted to 15.1 million hectares in 2012 and 2013.

“This new data shows in detail how Russia and Canada have faced a massive spike in tree cover loss,” said Nigel Sizer, Global Director of WRI’s Forests Program. “These forests and soils contain vast carbon stocks so losses represent a significant contribution to the greenhouse gas emissions that are driving climate change.” 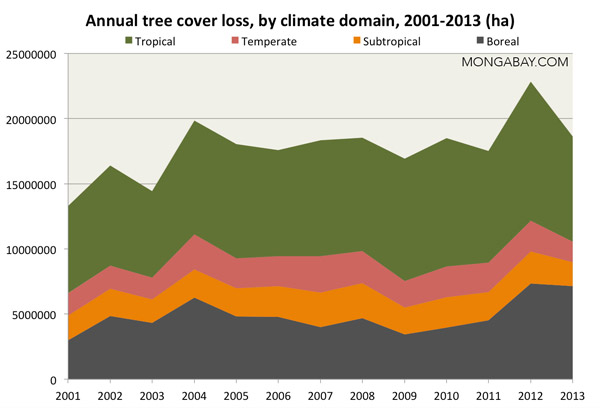 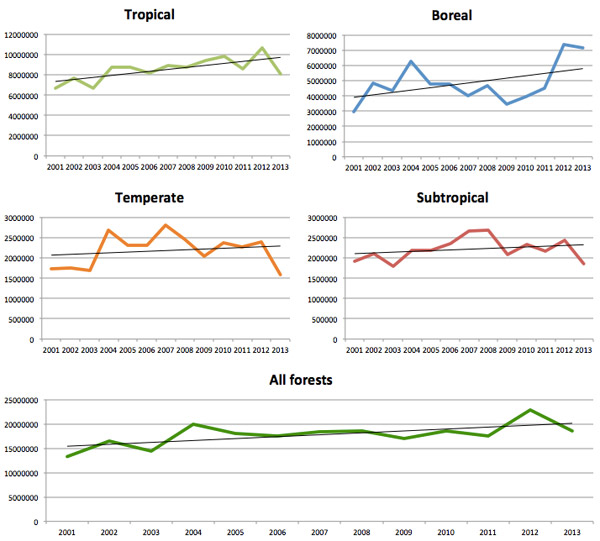 Most boreal forest loss in recent years is attributed to fires, although timber harvesting is also a major factor. Logging fragments forests and can make them more susceptible to fire. Climate change is also exacerbating fire risk.

“This should be a clear call to action to look closely at forest management in Russia and Canada in the face of climate change” said Olga Gershenzon, Board Chair of Transparent World, a Russian NGO, and founder of ScanEx, a Russian commercial satellite imagery company and GFW partner. “The massive tree cover loss shows there is much to be improved in terms of monitoring and understanding the causes and types of forest fires, as well as making information about fires available to the public in real time along with maps of land allocation and responsibility.”

While the world’s northern-most forests experienced the fastest acceleration in tree cover loss, the tropics still accounted for the bulk of forest loss, amounting to nearly 19 million hectares over the past two years. Brazil (4.5 million hectares of tree cover loss), Indonesia (3.3 million ha), Democratic Republic of Congo (1.4 million ha), and Malaysia (931,000 ha) had the highest extent of forest loss since January 2012. However three of those four countries — Brazil, Indonesia, and Malaysia — saw a significant drop off in forest loss in 2013. Indonesia’s forest loss in 2013 was the lowest in any year since 2003.

Temperate countries also ranked high on the list, led by the United States, which was fourth in total loss over the past two years.

However the headline figures do not tell the whole story as they focus only on tree cover, rather than clearing of natural forests. This means that cyclical harvesting of plantations or conversion of rubber estates for oil palm would show up as “forest loss”. Therefore countries like the United States, Sweden, and Finland rank far higher on the “forest loss” scale than they would were plantations excluded. The numbers would also be skewed for tropical countries with large industrial plantations — for example Indonesia, Malaysia, and Brazil. The researchers are working on “masks” to distinguish between natural forests and plantations to isolate “deforestation”, but that process requires substantially more computing power and to date is only available for a handful of countries, including Indonesia. 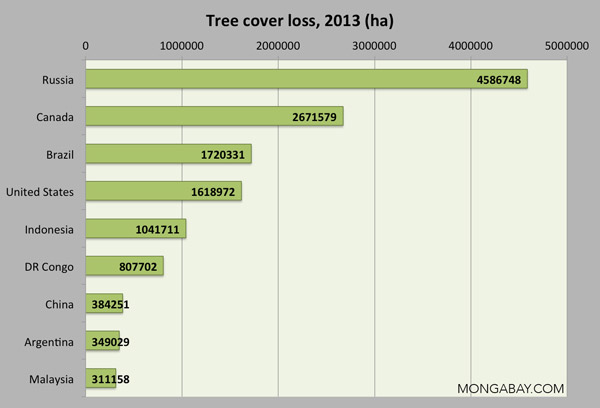 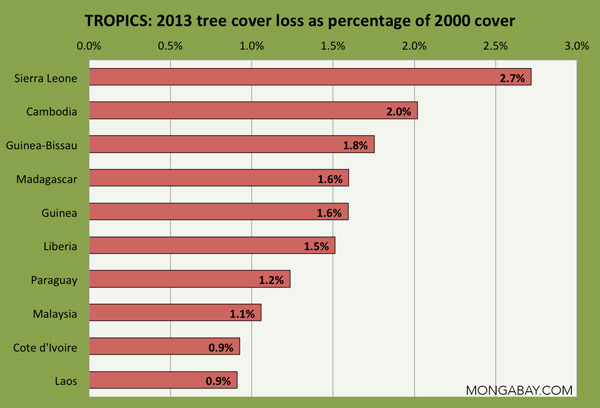 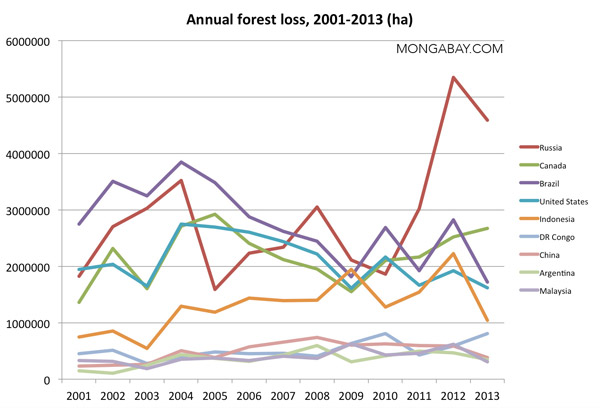 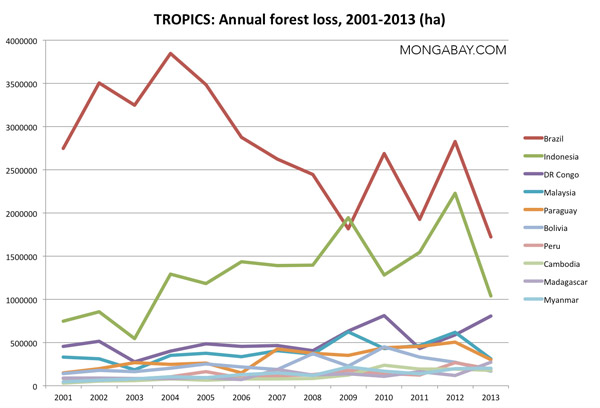 Forest loss will continue to grow as plantations expand because cyclical harvesting of plantations shows up as tree cover loss. Therefore even if clearing of natural forests — deforestation — fell to zero, the algorithm would still show substantial annual forest loss. For that reason, researchers are working to develop layers to mask out plantations, disaggregating them from natural forests.

Nevertheless the data confirms that forest loss continues at a high rate worldwide. Overall 231 million hectares — an area the size of Democratic Republic of the Congo or Texas and Alaska combined — lost tree cover between 2001 and 2013.

Loss of forests is important because of their critical ecological functions, including maintaining rainfall, sequestering vast amounts of carbon, securing soils, and supporting more than half the planet’s terrestrial plants and animals. Humanity is also highly dependent on forests to nourish agriculture; afford food, fiber, and fuel; and provide recreational and spiritual values. 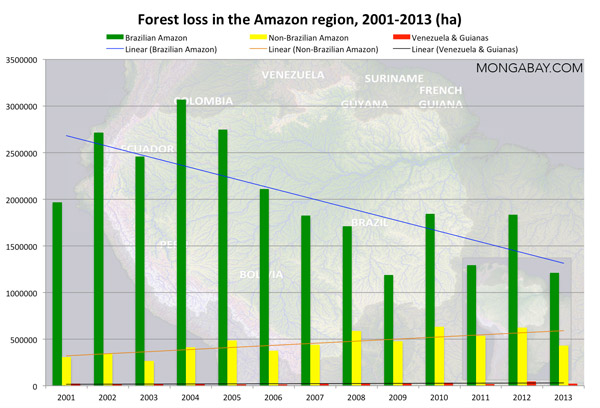 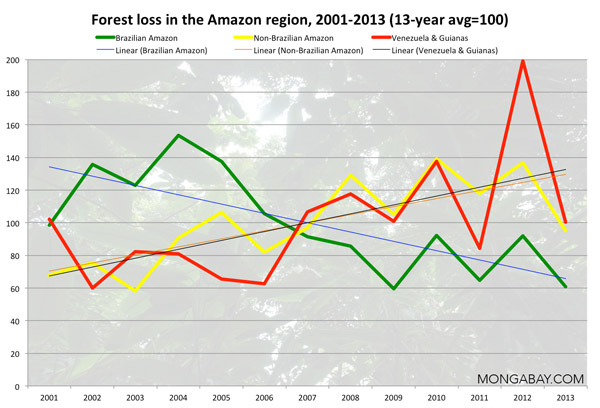 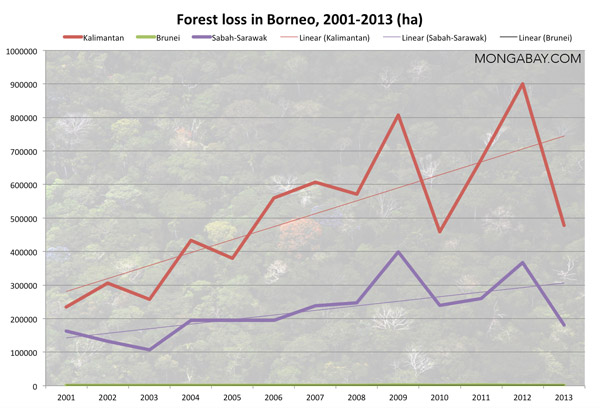 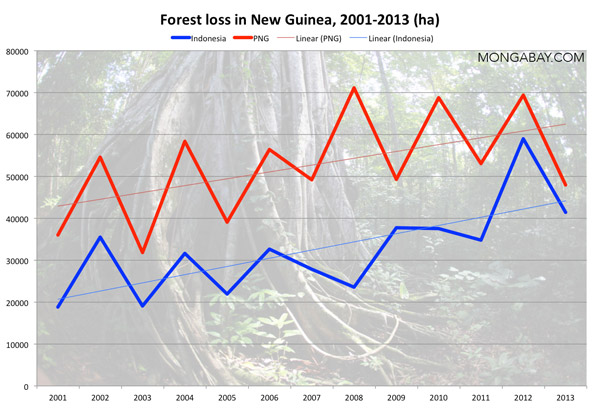