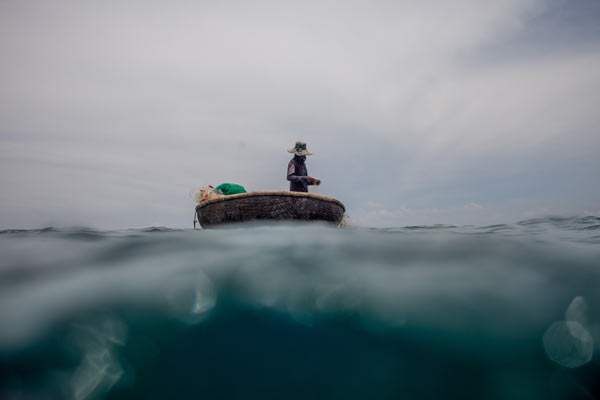 A fisherman in a small teacup-like boat, which is tethered to a larger vessel, off the coast of Lý Sơn Island. Tensions with China have forced these Vietnamese fishermen to work closer to shore, which has dramatically depleted coastal fisheries.

Could inland aquaculture help save the oceans and feed the world?

China Tries to Clean Up Its Fish Farms – SCIENTIFIC AMERICAN

China’s Fish Farms Could Save the Oceans – SCIENTIFIC AMERICAN

Only China Can Save the Seas [Commentary] – SCIENTIFIC AMERICAN

The island of Lý Sơn sits a few miles off shore of the city of Da Nang and halfway down the long, serpentine coast of Vietnam. Most of its people are simple fishermen, trolling the South China Sea for octopus, shrimp and whatever fish they can catch.

It’s a tiny isle, rarely visited by tourists and nowhere near China. Yet, these fishermen now find themselves caught in an international dispute between their country and Asia’s dominant nation.

China — in a grab for regional power and vital sources of protein and potentially oil — has claimed ownership of most of the ocean stretching between Hong Kong, Malaysia and the Philippines. This vast, poorly defined area covers about 90 percent of the 1.35 million square mile (3.5 million square kilometer) South China Sea. It includes 10 percent of global fisheries and accounts for $5 trillion in annual shipping. Laying claim to that much ocean is comparable to the U.S. alleging its sovereignty over the entire Gulf coast of Mexico into Central America.

China first claimed the South China Sea, labeling it the “nine-dotted line” on a 1947 map, possibly in response to the power vacuum created by Japan’s surrender two years earlier. Their claim conflicts with those of Vietnam, Taiwan, Malaysia, the Philippines and Brunei.

While maritime lawyers say China’s “nine-dotted line” has little legal basis under international law, it is backed by military muscle. Here on Lý Sơn, fishermen confronted by China’s ban on their traditional fishing grounds can no longer safely go more than a couple hundred miles out to sea, so are depleting the shoals around Vietnam’s coast.

To see the effects firsthand, we swam out to visit a fishing boat working just off another nearby island. The fishermen, working from traditional teacup-shaped boats tethered to a larger vessel, said it had been a disappointing day. One of many in recent years.

The coastal reefs that once teemed with life were desolate. The fishermen said that there were just too many boats trying to scrape a living from depleted grounds close to shore. But they certainly weren’t about to risk going farther out to sea.

Their caution is warranted. If, like 46-year-old Nguyên Phú, they venture too deeply into Vietnam’s claimed territorial waters, a Chinese patrol boat will swoop down on them. One such patrol, says Phú, captured him and his crew early one morning, impounded his boat and imprisoned them for a month. He endured daily beatings.

“When they came, what could we do?” he asks, crouching down like a frog with his hands above his head. “We just put our hands up like this, and said, ‘Don’t shoot! Don’t shoot!'”

Phú isn’t the only victim. Other fishermen imprisoned in anticipation of an unknown fate, wait stoically. Some write poetry. For his part, Phú passed the days by carving a tattoo into his arm. It reads: “Love your neighbors. Get revenge on your enemies.”

A fisherman in a small teacup-like boat, which is tethered to a larger vessel, off the coast of Lý Sơn Island. Tensions with China have forced these Vietnamese fishermen to work closer to shore, which has dramatically depleted coastal fisheries. 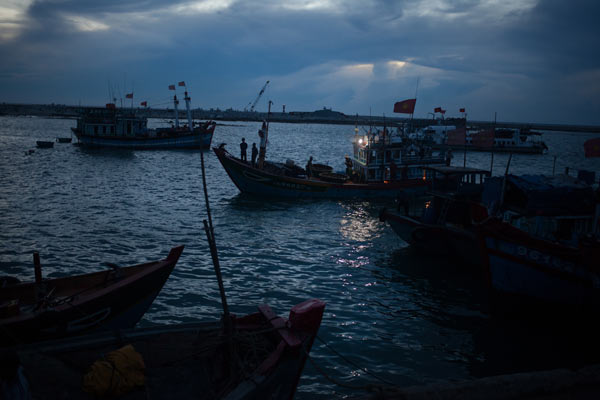 Lý Sơn fishing vessels returning from the sea at dawn. 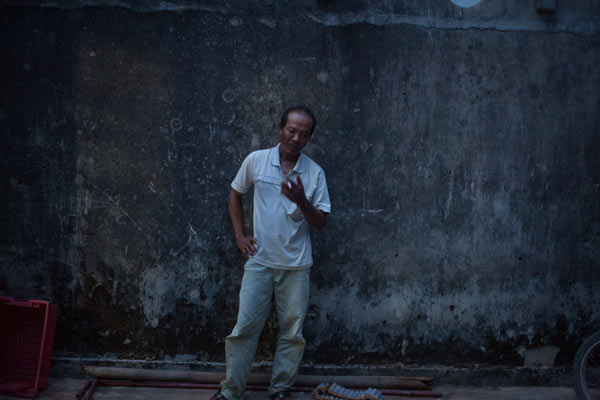 Nguyên Phú outside his home on Lý Sơn island. In 2007, Phú was arrested by a Chinese military vessel while fishing off the coast of Vietnam. According to Phú, he endured beatings and severe conditions because the Chinese said he’d violated their sovereign waters. 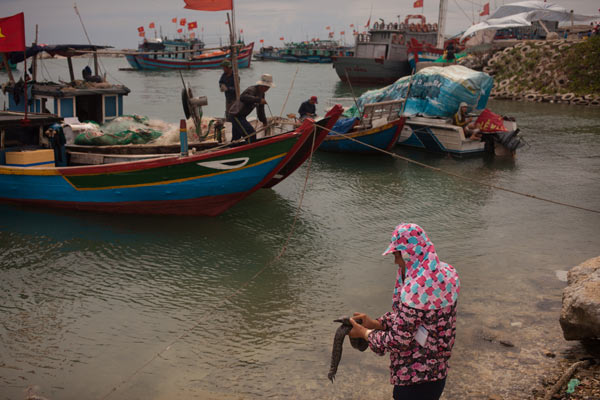 A woman cleans fish along the Lý Sơn shore. 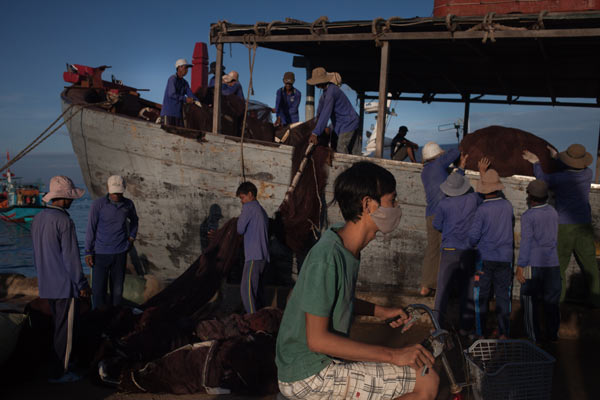 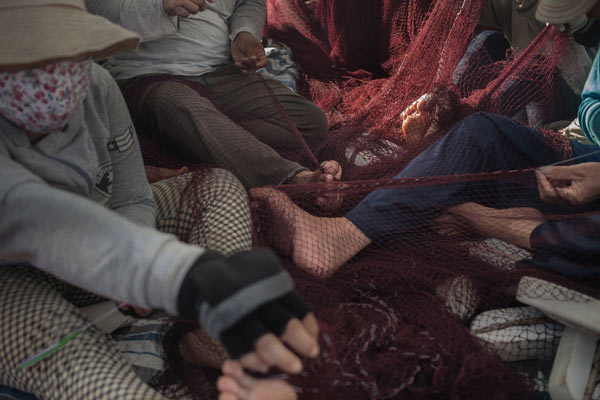 Women repairing nets before their husbands head to sea. 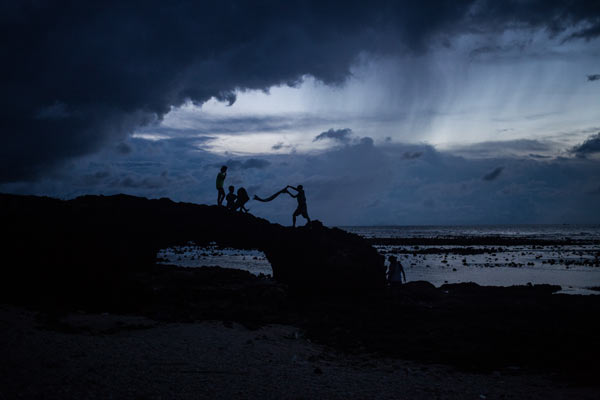 A group of friends wrap up their camp as a storm blows in toward the island. 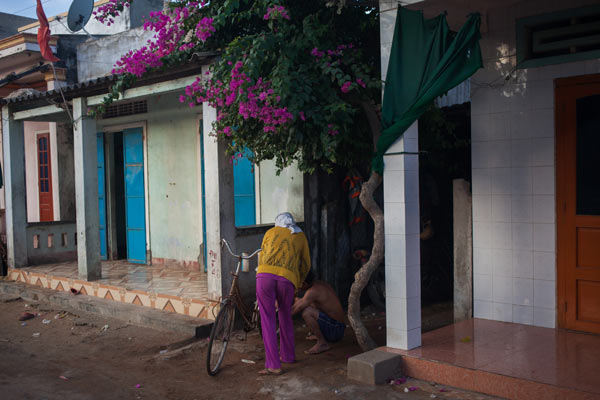 A woman works on her bicycle on Lý Sơn Island. 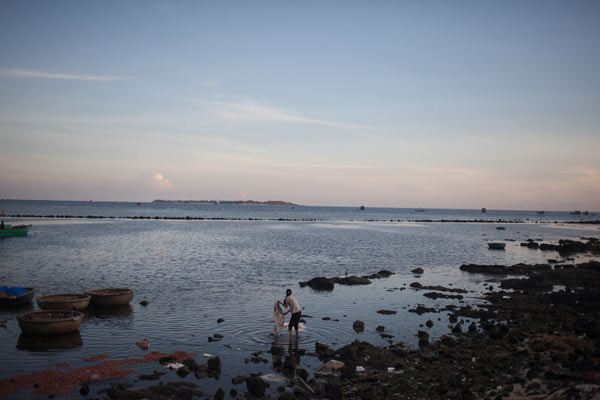 Washing clothes at dawn on Lý Sơn’s shore. The Island has become the frontline for current conflicts between Vietnam and China. Many local fishermen have been arrested while fishing far out to sea. 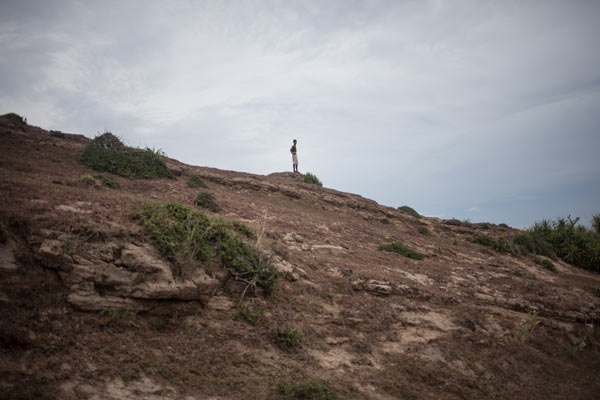 A man climbs up on a rock for a better view of his small cattle herd grazing below. 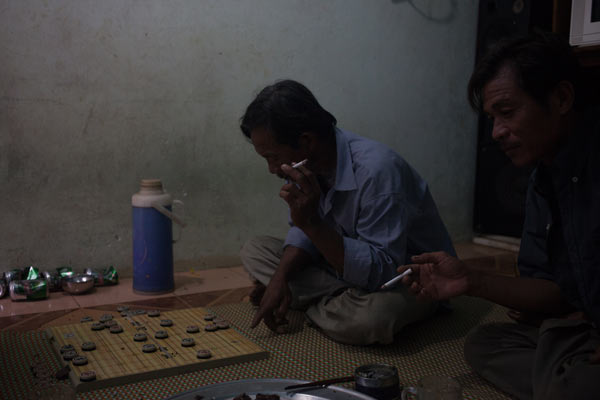 Vietnamese fishermen play a game at a friend’s house on Lý Sơn Island. 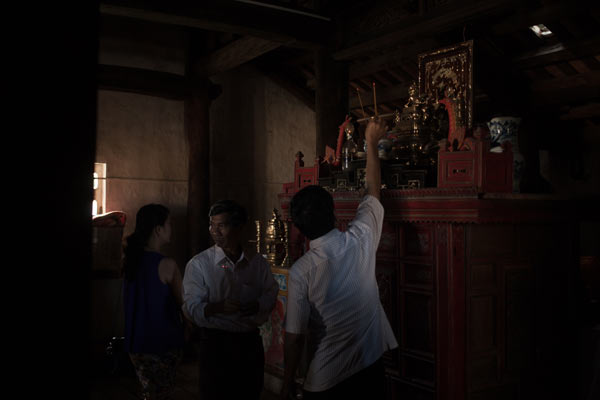 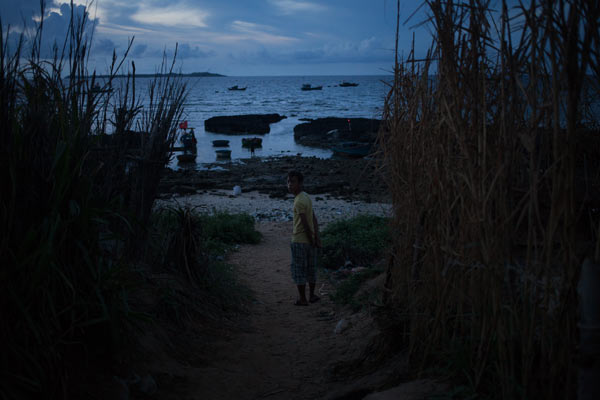 A man walks along the Lý Sơn shore. 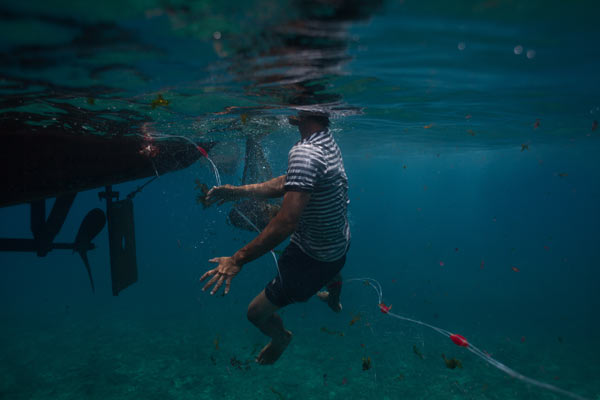 A young Vietnamese fisherman jumps into the water to untangle his net near Lý Sơn Island. Pressure from Chinese patrol boats has forced local fishermen to work closer to shore, devastating fish populations near the Vietnamese coast. 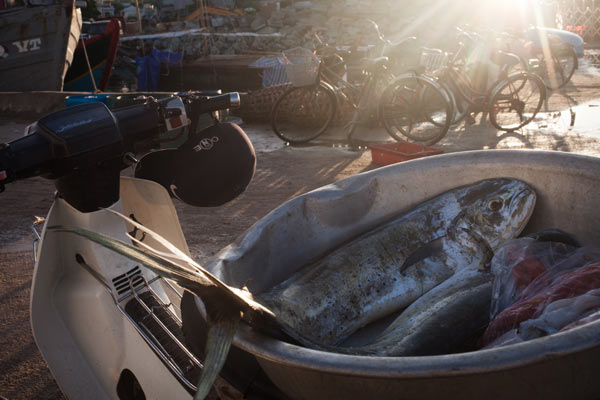 Fish for sale at the docks of Lý Sơn Island. 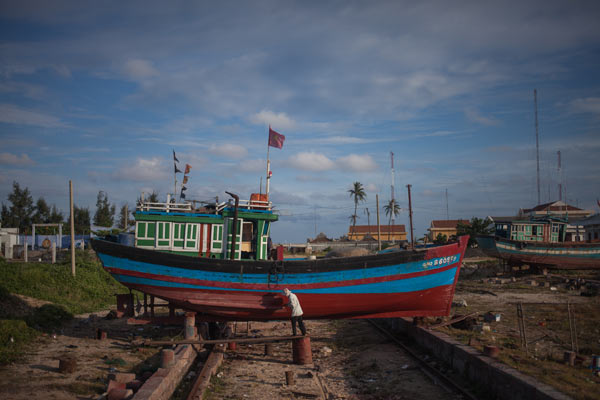 A man repaints his fishing boat. 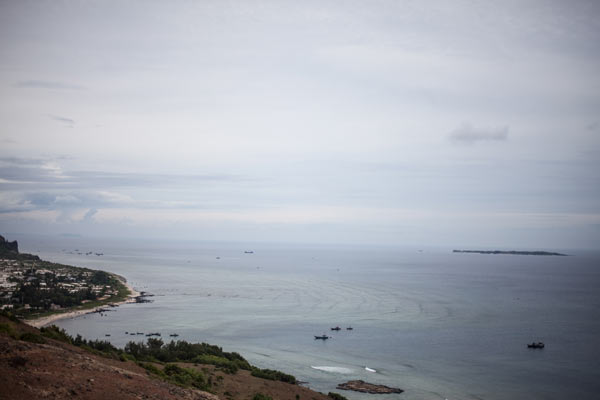 A long view out to sea from the coast of Lý Sơn, Vietnam. 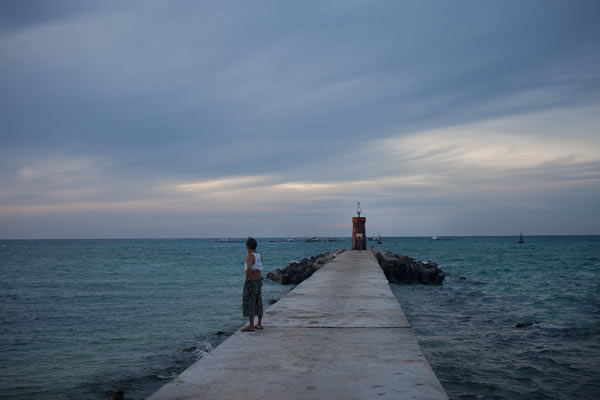 A man walks along a jetty and looks out to sea. Chinese assaults on Lý Sơn fishing boats have made the future uncertain for the island’s traditional fishermen.

A POEM OF PROTEST

Mai Phuy Châi, a 51-year old Lý Sơn fisherman, recited the following poem to a Vietnamese translator, who then related it to journalist Erik Vance, who notes that while rhythm and meter may have been lost in translation, the meaning is clear.

Vietnam is a heroic country.

It is strange why many countries want to attack us.

We have seen the tragic,

So we are all ready to fight at the frontline.

We always have to fight back enemies,

And working hard at the same time.

Years ago the United States invaded our country,

If China attacks us,

They will be ghosts here.

(in a kind of “beaten to death” sort of way)