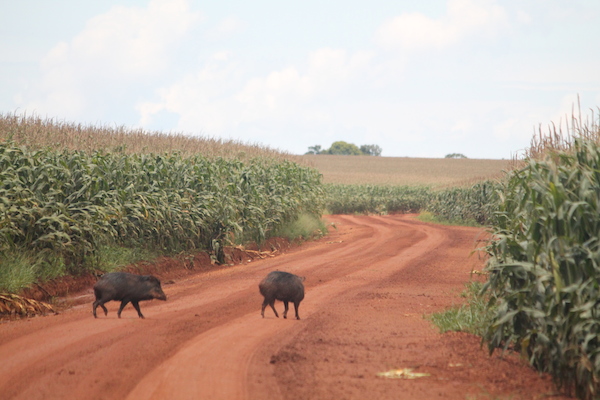 Margie Peixoto was driving her pickup across her farm in the Brazilian state of Mato Grosso do Sul one February afternoon when she spotted some broken corn stalks and a trio of white-lipped peccaries (Tayassu pecari) ambling along the red-clay road as if they owned it. The moment these wild pig relatives spotted the truck, they snorted, snarled and disappeared into the head-high crop, where dozens more likely hid.

“Every year the group gets bigger and bigger, and every year the damage to the crop is greater,” said Peixoto, a fit middle-aged woman from Zimbabwe, who met her Brazilian husband while traveling in Africa, and immigrated here to farm more than 30 years ago.

Peixoto estimates that wild peccaries destroyed as much as 10 percent of her crop last year, amounting to losses of 250,000 Brazilian reals ($100,000). One peccary attacked and killed the family dog.

She is not alone in her concern. Marcos Da Silva Cunha, the director of the nearby Emas National Park, said that the size of peccary packs in the region’s agricultural areas can be as large as 80-100 individuals, compared to packs of 40 individuals observed in their natural habitat.

Brazilian environmental regulators agree that the population explosion is a serious problem, but one that they have not yet been able to solve. Hunting isn’t the answer, since peccaries are protected both in and outside the national park. Instead, a few conservationists and farmers have proposed a counterintuitive partnership and peccary control measure: one that encourages bigger populations of jaguars and pumas.

Jaguars (Panthera onca) once had an expansive range, roaming throughout nearly all of South America north to the southwestern U.S. However, human pressures have fragmented its distribution in many places, and the species is currently listed as Near Threatened by the ICUN. Photo taken in Colombia by Rhett A. Butler.

Leandro Silveira, president of the Jaguar Conservation Fund, said the big cats used to be persecuted by cattle ranchers, but his research on radio-collared animals has shown that the cats are able to prowl through cane thickets and find refuge in vegetated watercourses. “Jaguars are breeding every year on this agricultural landscape,” he said. “They are living their entire life cycle outside of the park.”

Silveira is in discussions with farmers and with Odebrecht — a Brazilian petroleum, engineering and agriculture conglomerate that owns much of the cropland — to embrace a “jaguar-friendly” certification scheme. Under the low-cost program, farmers would be obligated to maintain a certain level of well-connected jaguar habitat on their agricultural properties and agree not to persecute big cats or their peccary prey. In return, the cats would naturally control peccary numbers, reducing crop harm.

Peixoto likes the idea. Her 9,390-acre (3,800-hectare) soy, corn, and cattle farm, sits on the border of Emas National Park — a mix of grassland savanna and forest that has been compared to the African plains because of plentiful, charismatic wildlife. With few trees to obstruct views, it is one of the best places in the country to watch tapir (Tapirus terrestris), giant anteater (Myrmecophaga tridactyla), maned wolf (Chrysocyon brachyurus), and, of course, the greater rhea (Rhea americana), the large flightless bird related to the ostrich which is locally known as “ema” in Portuguese. The national park encompasses the largest intact remnant of grassland savanna in the area and is isolated by encircling plantations of soy, corn, and sugarcane stretching to the horizon.

Although the conversion of pasture for sugarcane and other monocrops on Peixoto’s farm has contributed to the degradation of the Cerrado ecosystem, she and her husband consider themselves nature lovers, and are ready to welcome back the big cats. “We have good farming methods. We do no tillage. We are very careful with our spraying and the products that we use,” she said. More than a third of her farm remains undeveloped, above the legal minimum of 20 percent. “We could get permission to chop that down and plant soybeans. We don’t want to. We like having natural land.”

“We do our part,” she said. “Why don’t they do their part?” She is talking about Brazil’s environmental regulators, including the national park agency, known as the Chico Mendes Institute for Biodiversity Conservation (ICMBIO), and the Ministry of the Environment’s administrative arm, known as the Brazilian Institute of Environment and Renewable Natural Resources (IBAMA).

Recently, IBAMA nixed a proposal — popular among farmers — to capture young peccaries, raise them in captivity, and slaughter them for their prized meat. That’s why the jaguar certification plan to encourage big cat habitat on agricultural lands is getting support from farmers, and it may be critical to ensuring the future of Brazil’s threatened Cerrado biome and its rich biodiversity.

Cunha, the head of Emas National Park, also wants to naturally reduce peccary numbers. “The excess of [that] species is not good for the park,” he agreed. The peccaries root around in the vegetation, creating mud wallows, and disturbing the sensitive natural springs that Emas is well known for.” Emas serves as the headwaters for several Brazilian rivers, including the Araguaia, which flows 1,632 miles before feeding into the Amazon.

In response to the growing peccary population, Cunha has seen a rise in illegal hunting of the animals, and has investigated two cases of farmers poisoning peccary groups. Though peccaries are over abundant around Emas, he points out that the animals are classified as endangered in the Cerrado and are extinct in several national parks, including Iquaçu Falls and Serra Canastra. “Only Emas has a surplus,” he said.

Cunha disagrees, however, that controlling peccaries is his responsibility. “It’s not only the park’s problem,” he said. “It’s a problem for man and nature.” He traced the overpopulation of peccaries to the explosive growth of sugarcane farms over the last eight years. Beginning in the 1970s, the land around Emas was converted to cattle pasture, and, later, to corn and soy. In 2007, the Odebrecht conglomerate, which boasts $30 million in annual revenues, began buying up farmland around Emas. Today, the company has three sugar ethanol plants in cities to the north, south and east of the park, plus 333,592 acres (135,000 hectares) of farmland.

Although peccaries previously emerged from the national park to raid corn crops, Cunha contends that the sugarcane now allows them to survive year round outside its borders. After a fire in 2010 burned 90 percent of the parklands, wildlife became even more dependent on surrounding farms.

Odebrecht denies that agriculture has tipped the ecological balance. In a statement to mongabay.com they wrote that “there is no scientific evidence to indicate the population growth of peccary in the sugarcane fields,” and that “agricultural activities have not led to the disappearance of excess of any species.”

Whatever the root cause, Silveira is continuing his negotiations with Odebrecht and farmers to embrace his “jaguar-friendly” certification idea. However, his championing of a monocrop like sugarcane as a means of supporting big cats is an unpopular position among some conservationists.

Cunha, for one, believes it’s shortsighted. “Monoculture causes disequilibrium,” he said. Certainly, species like peccary and jaguar benefit from sugarcane, but other species suffer, he added. For example, dense cane thickets act as a barrier to the rhea. Cunha has proposed managing the problem through a combination of better fencing, supplemental feeding of peccaries inside the park, and sterilization, but he lacks the funds or the power to carry out such a proposal.

Emas National Park — the gem of the Cerrado biome — is perpetually low on funds. Though its 509 square miles (1,320 square kilometers) was designated a UNESCO World Heritage site in 2001, its concrete paths are crumbling. A guardhouse and visitor center are empty because the park can’t afford to pay employees to staff them, and a wooden viewing tower has been closed indefinitely with no money for repair. By contrast, national and state parks in the Amazon benefit from the Amazon Region Protected Areas program, which has received $200 million from the World Bank, World Wildlife Fund, and Ford Foundation. 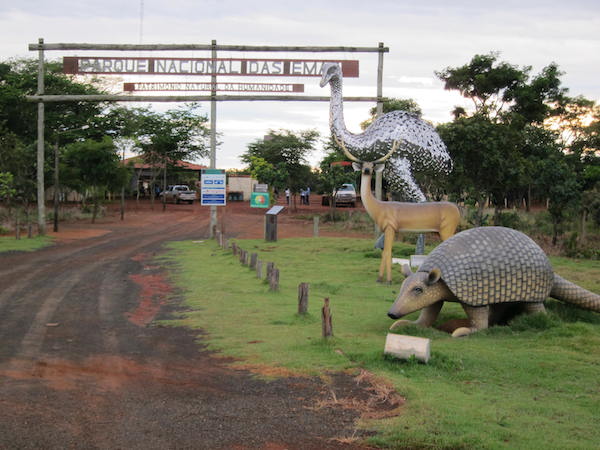 Emas National Park is underfunded and unable to staff its entrance guardhouse and visitor center, or to pay for a peccary management program. Photo by Brendan Borrell.

For now, farmers feel optimistic about Silveira’s program because it doesn’t depend on the government or the whims of international funders. Peixoto would much rather have feline predators roving the landscape than crop-raiding peccaries. “We have had puma kill some of our cows,” she said, “but it’s not a big loss when you think they kill the wild pigs.”

If things work out, as Silveira hopes, sugarcane and peccaries — proven to be a bad combination for local farmers — could turn into a boon for big cats and other wildlife. “I’m very optimistic,” he said. “If the habitat is well-connected, it could sustain all or our Cerrado fauna intact.”