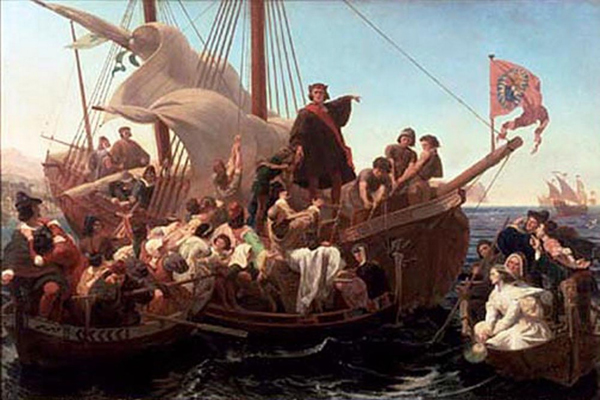 A dramatic painting of Christopher Columbus on the Santa Maria. Columbus’ arrival and subsequent colonizing forces in the New World led to million of deaths due to disease. Painting by: Emanuel Leutze.

In 1610, William Shakespeare began penning one of his greatest plays, The Tempest, which some critics view as a commentary on European colonization of far-away islands and continents. Along those lines, a study today in Nature—that’s likely to prove contentious—argues that 1610 is the first year of the human-dominated epoch, known as the Anthropocene, due to the upheavals caused by the ‘discovery’ of the New World.

“Historically, the collision of the Old and New Worlds marks the beginning of the modern world,” said lead author, Simon Lewis, with the University College London and the University of Leeds, whose paper now argues that historical marker also has epochal significance.

The idea of the Anthropocene has been gaining steam in recent years, though not yet accepted formally. Epochs are usually designated due to some massive planetary event, such as a meteor strike, rapid climate change, or a barrage of volcanic eruptions that makes its mark in the natural record. Proponents of defining the Anthropocene, however, contend that humans over our short history have made just as large an impact as any of these so-called natural—or cosmic—disasters.

“A more wide-spread recognition that human actions are driving far-reaching changes to the life-supporting infrastructure of Earth will have implications for our philosophical, social, economic and political views of our environment,” said co-author of the paper, Mark Maslin, a geologist with the University College London.

But even if adopted, one of the questions swirling around the Anthropocene is when would it begin? Some have argued for a date around 12,000 years ago when humans first started driving large-bodied mammals and birds to extinction through overhunting. Others have argued for the designation to correspond with the rise of farming, around 10,000 years ago. Others have pointed to more recent changes such as the start of the Industrial Revolution or the development of atomic weapons. Aluminum plant in Suriname. Scientists have also suggested the Industrial Revolution as a possible starting point for the Anthropocene. Photo by: Rhett A. Butler.

To prove a new epoch, however, scientists need to show two things: a long-lasting change to the planet and a definitive marker in the natural world recorded in either rock, ancient ice, or the seafloor. Looking through 50,000 years of human history, Lewis and his team picked out the seemingly innocuous year of 1610 as the best fit.

First the researchers argue that the sudden global exchange of animals and plants after Europeans stumbled on the New World represented a biological intermingling without precedent, i.e. an Earth-changing event. This was a time when oceanic trade—and subsequent colonization—rose swiftly. Along the way, crops, domestic animals, and many wild species were moved—and established—far from their original homes. Corn came to Europe, rats to Mauritius, and horses to the Americas.

“The Anthropocene probably began when species jumped continents, starting when the Old World met the New. We humans are now a geological power in our own right—as Earth-changing as a meteorite strike,” noted Lewis.

But why 1610 specifically? Because that’s the year scientists found a physical marker on the natural world. According to Antarctic ice-cores, atmospheric carbon dioxide fell rapidly around this time—with the crux at 1610. In all, the carbon dioxide levels dropped seven to ten parts per million. Just like the interchange of plants and animals worldwide, it’s believed the carbon dioxide levels fell suddenly due to the march of Europe on the Americas.

When Europeans arrived in the New World they brought with them novel diseases—especially smallpox—that led to an unintended genocide of tens-of-millions of indigenous people, though many were also killed by war, colonization, and slavery. Scientists have estimated that approximately 80-95 percent of the population in the Americas died due to disease after contact. With such depopulation, once-cleared forests returned quickly, sequestering carbon dioxide on a massive scale and momentarily cooling the planet.

The cooling didn’t last long, as we well know. Today, the Earth’s temperature is on the rise, largely due to burning fossil fuels, but also connected to cutting down forests and industrialized agriculture. Atmospheric carbon dioxide levels now hover around 400 parts per million, a level not seen for several million years—and the first time in human history.

Still, as humans have shaped the Earth into its present form, the researchers also note that unlike past epochal events, we also have the power to rollback some of our impacts.

“To a large extent the future of the only place where life is known to exist is being determined by the actions of humans,” the researchers write in their paper. “Yet, the power that humans wield is unlike any other force of nature, because it is reflexive and therefore can be used, withdrawn or modified.”

A lesson, in fact, found in The Tempest when Prospero retires his magic.

The play was performed one year later in 1611 when Miranda’s famous words were first heard aloud: “O brave new world, That has such people in ‘t!”.