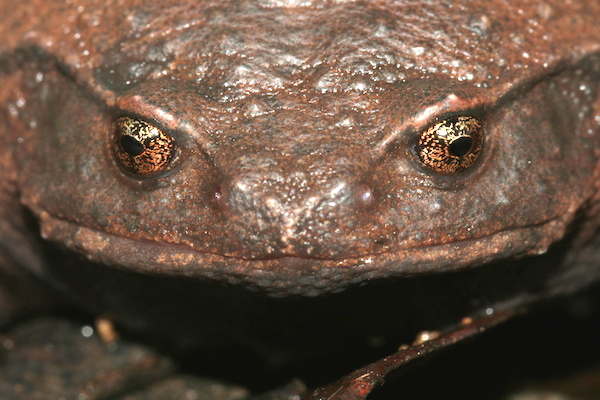 Madagascar is a treasure trove of frogs. Located off the east coast of Africa, this large island nation has more than 500 species of frogs, many of which are found nowhere else in the world. Much of Madagascar’s rich biodiversity remains understudied. As researchers comb through the country’s forests, they continue to discover previously undescribed species of frogs, adding to Madagascar’s amphibian diversity.

In November 1972, Charles P. Blanc, a herpetologist, collected a specimen of a previously undescribed frog species in Madagascar. This was the first and only known specimen of this animal, which researchers soon described as Rhombophryne serratopalpebrosa. Rhombophryne is a group of terrestrial frogs found in northern and eastern Madagascar.

“The genus belongs to a Madagascar-endemic subfamily of narrow-mouthed frogs called Cophylinae, which contains something of an odd assortment of frogs, including large arboreal species (for example, Platypelis grandis) and some of the smallest frogs in the world (genus Stumpffia),” Mark Scherz, lead author and a Masters student at Ludwig Maximilian University of Munich in Germany, told mongabay.com.

The description of Blanc’s single specimen was quite brief, making it an ambiguous reference to classify related or similar species, Scherz added. The problem was confounded by the inability to find additional specimens of this species during subsequent expeditions. So Blanc’s animal from 1972 was the only one available to taxonomists, he said.

To help better classify related Rhombophryne frogs, Scherz’s team decided to re-describe the only specimen of Rhombophryne serratopalpebrosa using better techniques, including a micro CT-scan of the specimen’s skeleton.

“Not only does this help us to describe more species from this species complex, but it will also help us re-identify the real R. serratopalpebrosa when it is re-discovered,” Scherz said.

During the course of their re-investigation, the team produced a more detailed description of R. serratopalpebrosa. This helped them classify related frog species collected from Madagascar’s forests, including a new species Rhombophryne vaventy, which was almost twice the size of R. serratopalpebrosa. The team has described several other new Rhombophryne frogs as well.

“This group of Rhombophryne frogs has proved surprisingly diverse,” Scherz said. “But Rhombophryne is also a notoriously difficult genus of frogs to find.”

Moreover, fieldwork hasn’t been as extensive as one could hope for in these northeastern rainforest areas, Scherz added, many of which are not easy to access. Both R. serratopalpebrosa and R. vaventy occur in a small area at high altitude in Marojejy National Park, and probably have only a tiny distribution. Scherz’s team, in fact, proposes an IUCN Red List threat status of Vulnerable for these frogs in their recent paper published in Zootaxa.

Marojejy, where the newly described frog species are known to occur, is an amphibian haven. A UNESCO World Heritage Site, Marojejy is home to about 150 species of amphibians and reptiles, 120 species of birds and 11 species of lemurs, including the critically endangered silky sifaka (Propithecus candidus), a large lemur with long, white, silky fur.

While the park is protected by law, the rainforests have for a long time been threatened by illegal logging. Illegal harvesting of rosewood for export to China, the world’s largest consumer of Malagasy rosewood, is an especially big conservation concern for both Marojejy and Masoala National Parks in Madagascar. In fact, in 2014, Singapore authorities made one of the largest seizures of rosewood logs smuggled out of Madagascar’s rainforests. 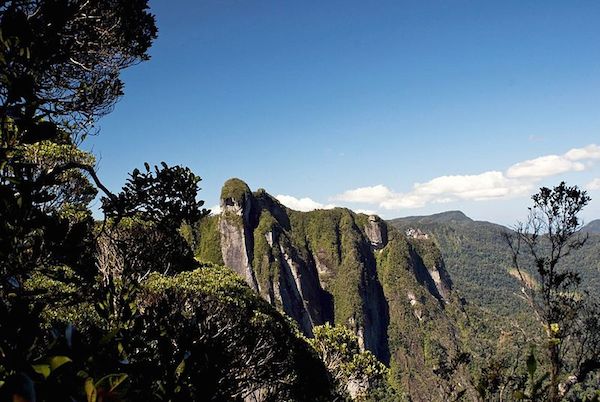 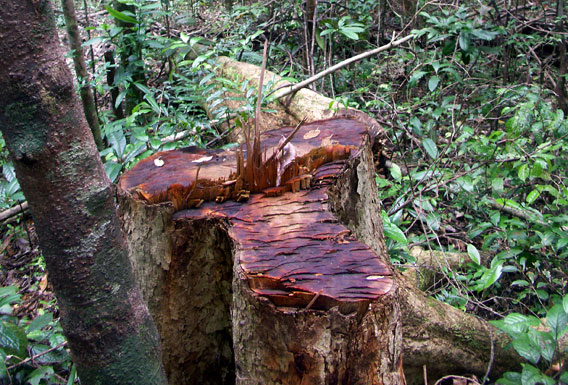 A rosewood stump from a felled tree in nearby Masoala National Park. Photo by Rhett A. Butler.

Madagascar is rapidly losing its thick, unexplored forests. Between 2001 and 2012, the island country lost over 1.2 million hectares – or 7 percent – of its tree cover according to Global Forest Watch. Marojejy National Park, during the same period, seems to have lost almost 1,300 hectares of tree cover, mostly along the edges of the park.

Both R. serratopalpebrosa and R. vaventy occur at higher altitudes in Marojejy. And high altitude species have the advantage that most pressures on forests start at its edges that are lower down, Scherz said. “So they are the last to be affected.”

“On the other hand, climate change could drive them to extinction in their high altitude refuges, but that is not likely to happen before the forests are cut down – it’s a long-term low-level threat that is nothing in comparison to the threat of deforestation,” he added.

This is especially true for many other species of the genus Rhombophryne, that unlike R. serratopalpebrosa and R. vaventy, are found in unprotected forests or at lower altitudes, making them vulnerable to the threat of deforestation. 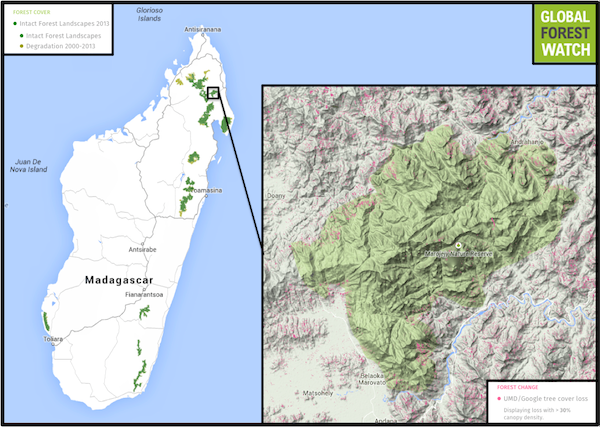 Global Forest Watch data shows Madagascar has few remaning intact forest landscapes (IFLs), which are undisturbed areas or forestland large enough to support their original levels of biodiversity. One IFL comprises Marojejy National Park, which is surrounded by tree cover loss. The data indicate some loss is also occurring within the park. Click to enlarge.

For a long time, the lethal chytrid fungus (Batrachochytrium dendrobatidis), which has decimated amphibian populations in many parts of the world, was not reported from Madagascar.

But a survey between 2005 and 2014 showed that the fungus, which causes a deadly infectious disease called chytridiomycosis in amphibians, has spread throughout the country since its first detection in 2010. The results of the survey were recently published in the journal Scientific Reports.

According to the study, frogs that tested positive for chytrid fungus infection are distributed over all four families of native Malagasy frogs, including Microhylidae, to which the Rhombophryne frogs belong. Researchers have not, however, observed actual clinical signs of the disease chytridiomycosis in any of the frogs.

For the newly described Rhombophryne frogs, forests are key.

“It’s a mixed bag, but the motif is simple: the frogs need the forest,” Scherz said. “They are not found outside it. Some forests are protected, some are not. Those in unprotected areas are at greater threat than those outside them, but all of them are threatened.

“The biggest things we can do to protect these frogs right now are twofold: first and foremost, we must protect their forests. Meanwhile, we must do everything we can to learn about them; our understanding of their ecology is practically nil. And because of that, they may be threatened or resilient in ways that we cannot begin to imagine at this stage.”