While deforestation for soy production in the Brazilian Amazon has slowed since the establishment of a deforestation moratorium in 2006, clearing for soy has increased sharply in recent years in the Bolivian Amazon; Paraguay’s Chaco, a dry forest ecosystem; and Brazil’s cerrado, a savanna woodland. Photo by Rhett A. Butler.

The move, announced today and expected to be formally approved in May, came after a campaign by institutional investors and environmentalist groups. With ADM’s sprawling operations, including a presence in 140 countries, the commitment is one of the most significant in the commodity sector where a growing number of corporations are adopting social and environmental safeguards for raw materials sourcing, said Lucia von Reusner of Green Century Capital Management, a shareholder activist fund that pressured ADM to adopt the policy.

“Clearing forests to grow food destroys the very ecosystems that agriculture depends on, and is a short-term business model that poses long-term threats to global food security and our climate,” von Reusner said in a statement. “ADM’s new policy aims to de-link food production from the crude practice of destroying forests, and sets the precedent for a new model of agricultural production that protects the environment and our food supply.” Soy and rainforest in the Brazilian Amazon. Photo by Rhett A. Butler.

Given that ADM has 265 processing plants and 460 crop procurement facilities, the commitment should be far-reaching, according to Glenn Hurowitz of the Forest Heroes campaign.

“ADM’s action plan for forest conservation in Latin America makes the company the leader among the big soy traders,” said Hurowitz. “ADM has shown that they can boost soy production by focusing expansion on degraded land and yield improvement, instead of sacrificing forests.”

“In order to fulfill its commitments, ADM will have to set credible thresholds that fully protect high carbon stock and high conservation value forests, as well as indigenous peoples’ rights. We look forward to joining with civil society organizations in Latin America over the next few months to help ADM fully develop its policy and action plans, and to swiftly turn its commitments into enduring protections for forests and native eco-systems around the world.”

The deal could also influence other big commodity producing and trading firms, according to Barbara Bramble of the National Wildlife Federation, which participated in the effort to persuade ADM.

“There’s still plenty of room for other big South American players like Bunge, Cargill, and Louis Dreyfus to leapfrog ADM in the global race to deliver the environmentally and socially responsible products that consumers want to buy,” said Bramble. 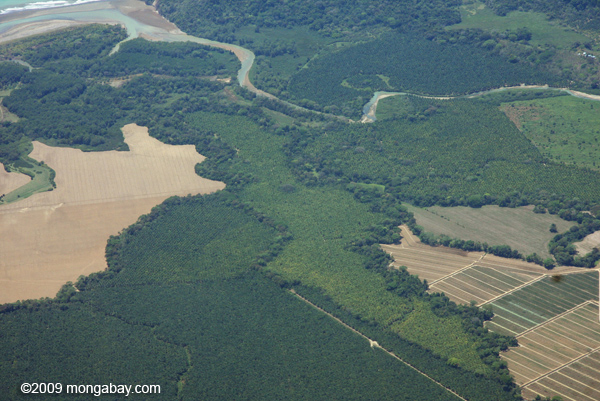 Clearing of wetland forests for oil palm plantations in Latin America. Photo by Rhett A. Butler.

Beyond Green Century, Forest Heroes, and NWF, several other groups were involved in the ADM campaign, including the Sierra Club, the Union of Concerned Scientists, SumOfUs, NRDC, and the New York State Common Retirement Fund, a major institutional investor.

Bringing investors into campaigns appears to be a key strategy in pushing big companies like ADM, according to Lars Løvold, director of Rainforest Foundation Norway.

“Institutional investors have a major role to play in reducing forest destruction globally,” he said. “This is a great example of responsible investors joining forces to demand that the companies they invest in take action to reduce deforestation.” Soy in the Brazilian Amazon. Photo by Rhett A. Butler.

It’s not the first time the state of New York has gotten involved in a shareholder activist campaign — it also pushed Dunkin’ Donuts and ConAgra Foods, among others, to adopt forest-friendly policies.

“ADM’s commitment to using only sustainably-sourced palm and soy products validates our message that strong environmental policies make economic sense,” said New York State Comptroller Thomas P. DiNapoli in a statement. “We will continue to engage our portfolio companies on multiple fronts to improve their environmental practices. Business practices that destroy the environment and foster climate change can not only harm the public, but can damage corporations’ reputations, their bottom line and their investors.”

Green Century has been active in several campaigns, including Kellogg’s, Smuckers, Bungees, and others.

The stepped up focus on major companies is strategic given the increasing share of global deforestation driven by commodity production and trade. Whereas thirty to forty years ago the majority of tropical deforestation was driven by subsistence farming and local markets, today the bulk of forest loss is caused by crop production for urban and overseas markets. That trend, combined with the consolidation of commodity suppliers, traders and buyers, has made it more important than ever to target corporations in efforts to slow deforestation.