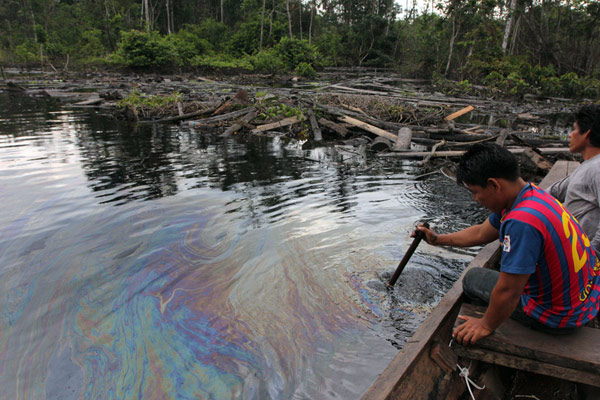 But more than three months later, wisps of oil floating down the Cuninico River—along with a larger spill in the neighboring community of San Pedro—are a reminder that the problems are not over.

“The spill violated our rights,” says Galo Flores, the apu or president of Cuninico. “It has affected our entire life, but especially the water, because we don’t have safe water to drink.”

Cuninico has taken its case to Peru’s Constitutional Court with a lawsuit that names Peruvian health, environmental and regulatory oversight agencies, as well as the Ministry of Energy and Mines and Petroperú.

“The government failed to fulfill its responsibility to protect health and the environment, and that failure was due to negligence,” said lawyer Juan Carlos Ruiz of the non-profit Legal Defense Institute (Instituto de Defensa Legal, IDL) in Lima, who filed the suit in February on behalf of Flores and the community.

The leak in June 2014 dumped more than 1,600 barrels of oil into the pipeline canal in the forest upstream from Cuninico, killing fish and other animals and contaminating the river that the community uses for drinking, cooking, washing and bathing. 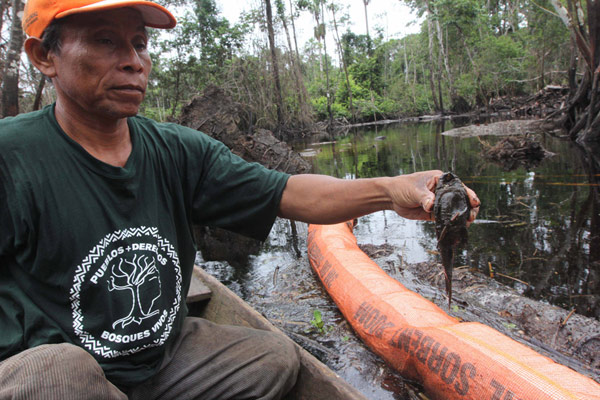 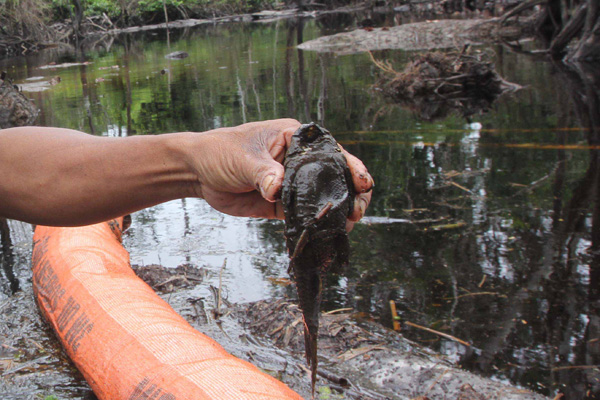 The cleanup that followed employed hundreds of local residents, but once it ended in December, the jobs disappeared.

Before the spill, fishing was a key source of food and income for local families. But buyers are steering clear of fish from Cuninico. Petroperú stopped providing food assistance when the cleanup ended in mid-December.

And now the pollution is back. 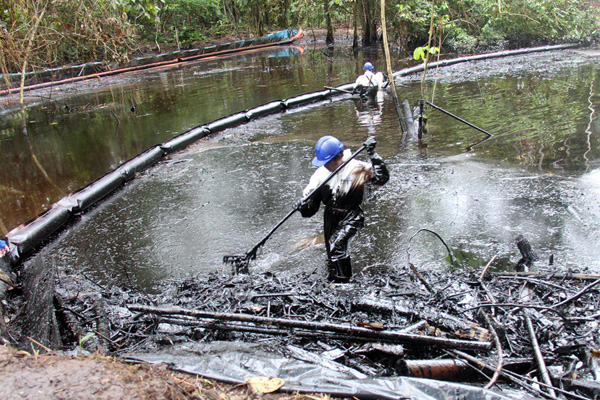 SAN PEDRO, Peru–Workers clean up a 7,800-barrel oil spill in the community of San Pedro, a Kukama Indian village on the Marañón River in northeastern Peru. Photo by Barbara Fraser

Toward the end of every year, heavy rains in the headwaters of Amazonian tributaries cause rivers to swell and overflow their banks. Instead of walking from house to house, villagers paddle canoes.

When the water rises, fish swim from the river into inland lakes to spawn. When the floodwaters subside five or six months later, fields and forests are blanketed with a new layer of nutrient-rich silt. That cycle sustains rural life throughout the Amazon.

But as the Marañón and Cuninico rivers rose, water spilled over the edge of the pipeline canal and around Petroperú’s oil-containment booms. 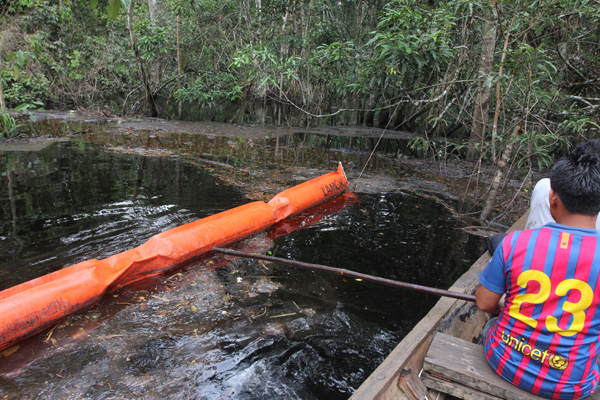 In early January, Flores and other villagers rowed a small boat into the canal, following a path that had been high and dry six months earlier. When they probed the bottom of the canal with a six-foot pole, shiny bubbles floated to the surface, accompanied by a strong smell of oil.

Two months later, the water was too deep for the pole to reach bottom, but they could row into areas that were inaccessible before.

Near the point that had been the epicenter of the spill an oil slick floated over the area where workers had poured recovered oil into barrels and stored bags of oil-coated vegetation.

Closer to the Cuninico River, sacks of oily boots, gloves and rags were awash in what had been a storage area.

Villagers complained of rashes, headaches and stomach ailments if they drank the water or bathed in the river. But the village has no potable water supply, so the Cuninico and Marañón rivers are the only possible sources. 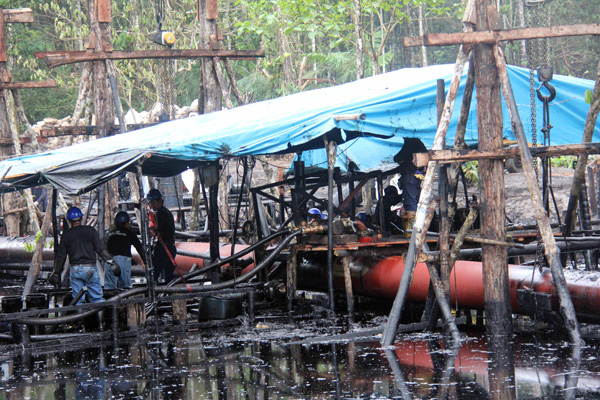 SAN PEDRO, Peru–Workers reinject spilled oil into the pipeline that carries crude from the Amazon across the Andes to Peru’s Pacific coast. Petroperú says S$12.5 million has been spent cleaning up the damage in Cuninico and US$1.3 million in San Pedro. Photo by Barbara Fraser

The pipeline dates from the 1970s, when oil production began in the northern Peruvian Amazon. For the first two decades, Occidental Petroleum and Petroperú operated the fields.

The agreement came in September 2013, but was only announced in March 2015. The settlement prohibits the parties from revealing the terms, which include a fund that Achuar leaders said would be used for projects such as fish farms, education and health.

Argentinian-based Pluspetrol took over the two oil leases in 1996 and 2001, but Petroperú still operates the pipeline that carries crude from the Amazon over the Andes to the Pacific coast. 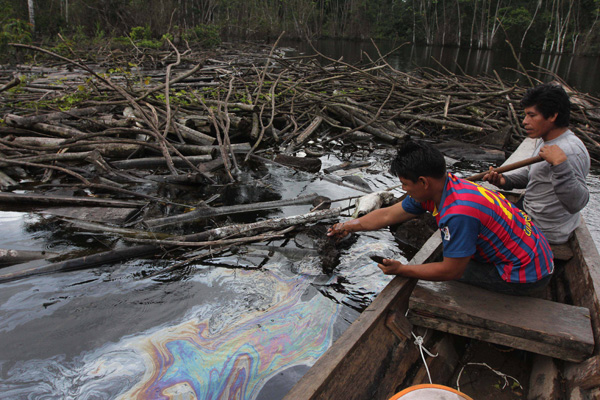 The lease on one of the oil fields—originally called Block 1AB and now renamed Block 192—expires in August, and indigenous communities along the Corrientes, Pastaza and Tigre rivers, all tributaries of the Marañón, have been trying to negotiate compensation for pollution on their lands. The other lease, on Block 8, expires in 2025.

In mid-March, the indigenous federations in those watersheds and the lower Marañón reached a wide-ranging agreement with the Peruvian government for health studies and health care, an environmental remediation fund, development projects and potable water.

The government is installing temporary water-treatment plants in 65 towns in the four watersheds, and 44 additional communities are being studied. Cuninico is in the study group, but officials are making no promises.

Even if it were selected, installation would be months away, as the plants are custom built to remove the specific pollutants found during a one-time analysis in each community. 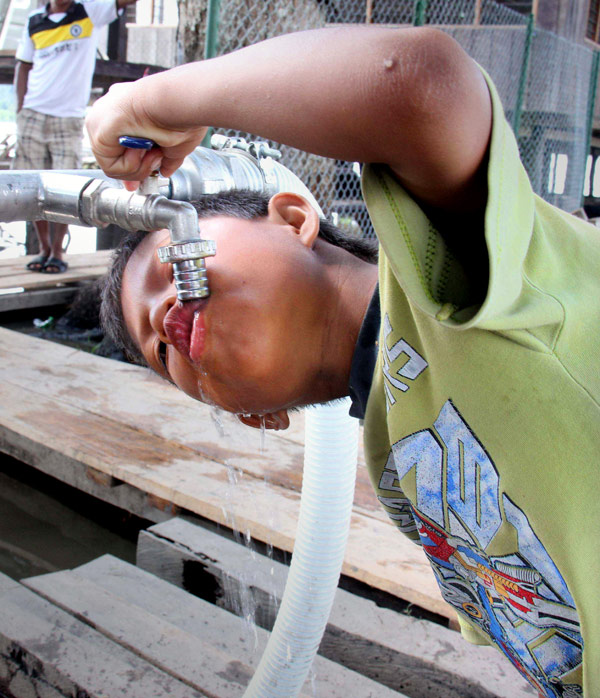 The neighboring community of San Pedro, where a larger spill of 7,800 barrels occurred in November, has received a water-treatment plant, although it was not yet operating in early March.

Several hundred workers are cleaning up that spill and reinjecting the recovered oil into the pipeline. Petroperú officials said they expected to finish work there in April and that crews would return to Cuninico for further cleanup when water levels there recede.

But Flores worries about the long-term health and environmental impacts. His community still lacks safe water, and people say the fish they catch taste oily. Fish from distant communities sell at three times the pre-spill price.

“We’re the ones who are going to suffer,” Flores said. “We are people. We’re not animals. Although this isn’t healthy even for the animals.” 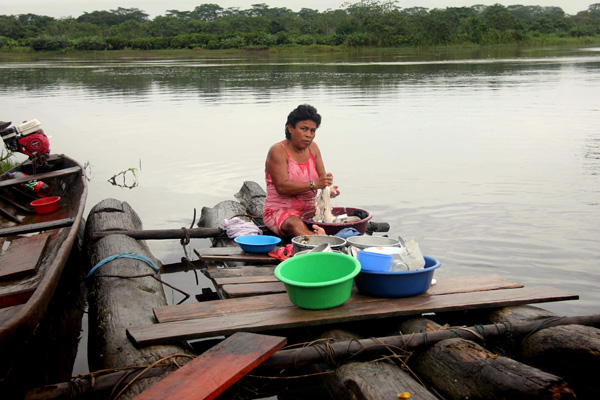