“If we don’t have forests, community grounds, burial place, and rice fields… then what will be the fate of our families?” asks Layuk Sarungallo, a traditional leader of the Ke’te Kessu area of the Bonoran Village in North Toraja Regency of Sulawesi.

He sits in front of a large Tongkonan, the traditional house of the Toraja people characterized by sweeping roofs that resemble a boat or a buffalo horn arching toward the sky. There are six family Tongkonan in this area, each paired with a similarly shaped barn to store grass, grain, and other crops. The locals still use traditional construction methods, maintaining their houses with wood, bamboo and reeds. The Tongkonan is a traditional house of Toraja communities. Photo by Eko Rusdianto.

The Tongkonan, and their construction, are a large part of the region’s cultural identity. The buildings serve as meeting places and spiritual centers as well as shelter. The sweeping rooflines aid in air circulation, keeping the interior cool even during the hottest part of the day.

“This family group still uses bamboo,” Layuk explains, “because the old wisdom is well-protected here.” He says other groups have begun to build houses with tin roofs, which requires capital and cash. “But, if I maintain the bamboo supply then the next generation does not need to buy materials.”

The materials are harvested from the 50 hectares of towering limestone hills surrounding the small community. The village has been selectively logging the area for personal use long before sustainable forestry became a buzzword. The bamboo and wood used for construction is carefully chosen by the community, and permission to cut is granted by the traditional leaders. While construction of Tongkonan requires a large amount of bamboo, care is taken to harvest it in a sustainable manner. Photo by Eko Rusdianto.

“Cutting down a tree without permission is considered theft, even if you are family…” explains Tato Dena, a ritual leader in the community.

According to Tato, the indigenous forests that support the Tongkonan communities contain the very essence of life. “If there is no forest, the Tongkonan will disappear… Then there is no place for family to meet, and the Toraja will be absorbed by big cities, and everyone will become selfish.”

Already there are pressures on the forest. As population increases, demand for resources follows. Recognizing the threat, the locals have implemented practices they hope will keep the Tongkonan alive. Layuk explains that if land is cleared to build a new house, the owner must replant the same number of trees or bamboo groves that were cut. “So, although the land is reduced, the number of plants does not decrease,” he says.

Layuk has also been on a mission to instill a love of the forest to the children of the community at an early age. After school he takes groups of children into the forest to plant seeds. “The forest belongs to everyone,” he tells them, “not to individuals or the village leaders.” 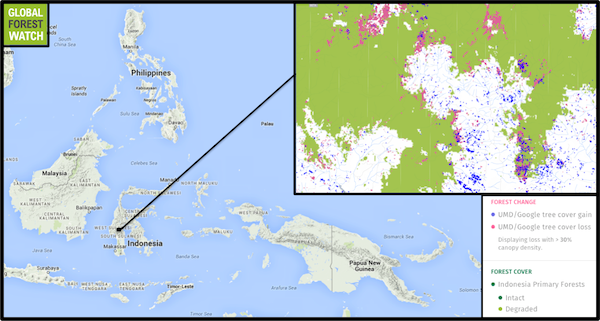 Global Forest Watch shows that while the region encompassing the village of Bonoran lost approximately 1,300 hectares of tree cover — largely degraded primary forest — from 2001 through 2012, about 500 hectares were gained through either natural regrowth or replanting. Click to enlarge.