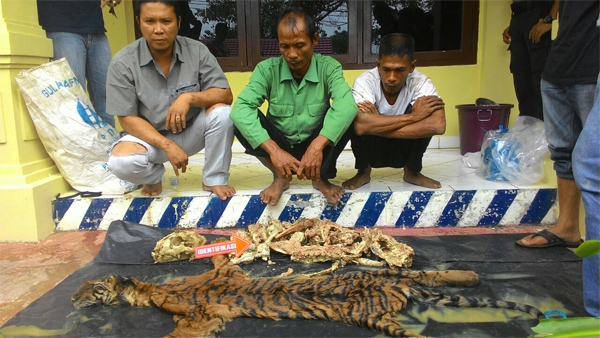 Picture of the tiger bust. Photo by Dian Risdianto / TNKS

A sting operation by Indonesian officials snared a group of tiger hunters operating in Kerinci Seblat National Park in Jambi Province, Sumatra. After an extended investigation, undercover officers caught three local residents as they attempted to sell a tiger skin and bones in the village of Karang Mendapo, in Sarolangun Regency.

“We have conducted an investigation into this group for six months, and this group is very experienced in the act [of poaching],” said Dian Risianto, a section head for the National Park which houses the largest population of tigers on Sumatra island.

Officials seized a 131 cm tiger skin, and 9 kg of bones which came from a male tiger estimated to be 2 years old. Judging from wounds on the skin, the tiger was initially snared by its right front foot, and then shot at close range in the abdomen. The poachers offered to sell the animal parts for 31 million rupiah ($2,400).

“Tiger skins are often sold on the domestic black market while the bones are usually sent abroad, mainly to China,” explained Dian. In addition, teeth and claws are most commonly shipped to Bali where they are used in local crafts and ornaments. Dian said that bones easily sell for two million rupiah ($150) per kilogram, while a claw sells for 500,000 rupiah ($38) and a canine tooth for as much as one million rupiah ($77).

Typically, hunters will front the cost of their operation independently, however when prices increase, a collector may provide capitol to the poachers in advance to encourage their activities.

“The three suspects will be charged under federal law No. 5/1990 on the Conservation of Natural Resources and Ecosystems. Article 21, paragraph 2 establishes a maximum criminal penalty of 5 years imprisonment and a fine of 100 million rupiah ($7,750),” an official with the Sarolangun Police told Mongabay-Indonesia.

“Most of the snares we find are in production forests, village forests, or community gardens,” Dian said. “These areas tend to be flat when compared with the National Park, and prey species such as deer and pig prefer these places over the Park. These conditions mean that the tigers are often found outside of the Park’s protected area.”

In 2014, PKHS patrol teams dismantled 55 snares, 80% of which were found outside of the National Park.

The 1.4 million hectares of Kerinci Seblat National Park are also home to other endangered species including the Sumatran rhinoceros and Sumatran elephant. The park contains the highest peak in Sumatra (Mount Kerinci at 3,805 meters) and is part of a World Heritage Site which includes Gunung Leuser and Bukit Barisan Selatan national parks.

Although China officially banned the sale of tiger bone in 1993, demand for both domestic and imported bone has continued to increase as a growing elite class buys status-confirming products such as tiger bone wine, which can sell four thousands of dollars per liter. Although tiger bone has long been used in Traditional Chinese Medicine to treat rheumatism, arthritis, headaches, stiffness, paralysis and dysentery, western medicine has failed to find any curative properties in tiger bones—or other animal products.