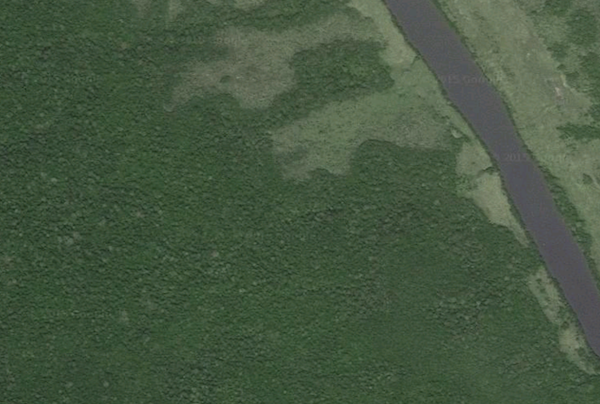 Cameroon is struggling to make progress in combatting illegal logging. Regulatory budgets are too thin to protect the country’s vast tracts of Congolian Rainforest. And demand domestically and abroad make the financial incentives for both the informal sector and Cameroon’s leaders too difficult to pass up, leading to an illicit timber trade beset with corruption.

“The current system has been in place for a long time,” said Alison Hoare, a Senior Research Fellow at Chatham House, “so a lot of those networks of informal payments are very well entrenched.” She added, “Overcoming that is very difficult.”

Hoare authored a report that examines the progress Cameroon’s forestry sector has made in recent years. Chatham House also published a similar report in 2010. Hoare’s research revealed that, although more private companies are following the rules when it comes to harvesting logs, the number of small-scale producers has swollen. 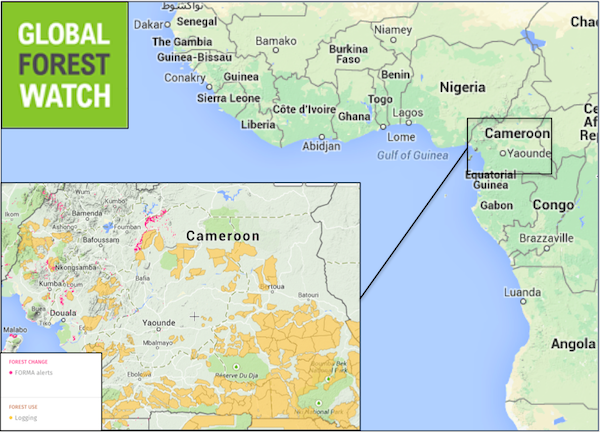 FORMA alerts (pink) and government-allocated (orange) logging concessions in Cameroon. The alerts frequently occur on the edges of, or outside, concessions. Half of all timber comes from the “informal artisanal sector,” which employs more than twice as many people as the formal side of the industry. The Chatham House report on Cameroon found that this side of the industry has not made up much ground in the fight against illegality since 2010. Click to enlarge. 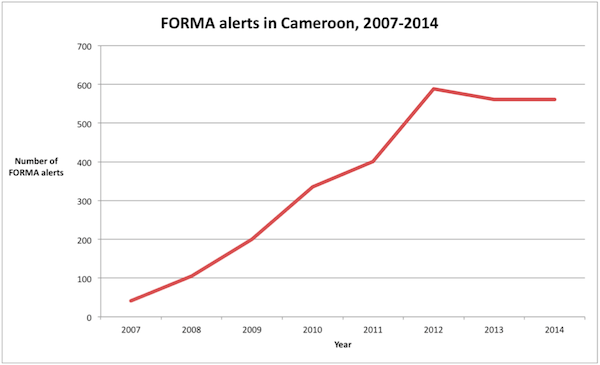 Data from World Resources Institute and Center for Global Development. Click to enlarge.

This “informal artisanal sector,” for which legality certification and traceability are more difficult, employs more than twice as many people as formal logging and processing companies and is believed to produce half the country’s timber.

Hoare said she was surprised “that it was on that scale.” The role that informal logging plays, particularly to satisfy domestic demands, also seems to have escaped the notice of the country’s leaders.

“Partly because it’s all informal, it’s not seen at the higher political levels as perhaps a priority sector or of huge importance,” she said. One of the recommendations to come out of the report is to find ways to improve the legal compliance of the domestic market, beginning with the engagement of the local community and indigenous timber producers who make up the informal sector. Indeed, a growing body of scientific research has found that community-managed forests generally have lower rates of deforestation than even their protected counterparts.

Cameroon is also an important source of timber for foreign markets, especially the European Union and increasingly China. In Europe, regulations require timber traders to “execute ‘due diligence’ to minimize the risk that they are trading in illegal wood,” said Philippe Verbelen, a forest campaigner with Greenpeace International, who was not an author of the report but reviewed a draft. Still, Verbelen cautions that importing wood from Cameroon is “high risk” because of the high rate of illegality in the country’s forest sector as documented in the Chatham House report.

Since 2010, the EU and Cameroon have been party to what’s known as a Voluntary Partnership Agreement (VPA) – in effect, an accord not to trade illegal timber – but progress seems to have stalled, Verbelen said. “As the Chatham House report rightly points out, ‘lack of political will’ and ‘corruption in the forest sector’ seem to be the main underlying causes [for] why fighting illegal logging is so difficult,” he added.

Verbelen did point out that the Forest Law Enforcement, Governance and Trade Action Plan – known as FLEGT – of which the implementation of VPAs is a critical component, is slated for an overhaul this year, providing the opportunity to course correct and better tackle issues such as the persistent illegality problems with Cameroon’s timber. 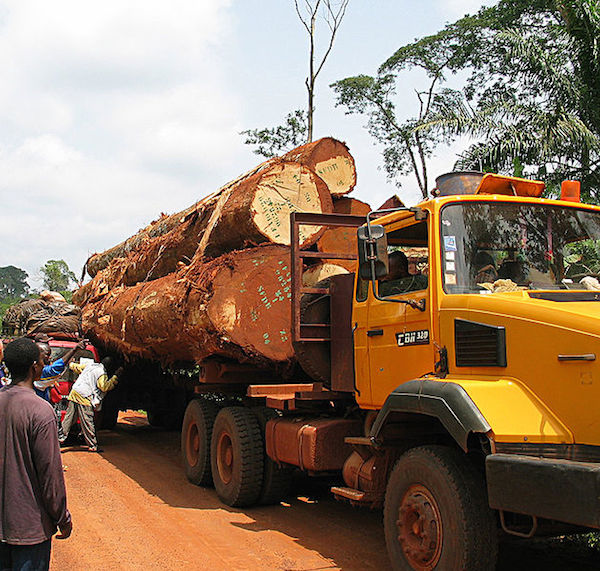 The lack of political will is partly a result of finite resources for civil society, Hoare said. These groups are often stretched thin as it is, and finding ways to integrate different strategies such as VPAs and REDD – reducing emissions from deforestation and forest degradation – instead of allowing them to compete for precious time and resources should be a priority, she said.

The paucity of political will is also tied to graft, Hoare said. Forest protection strategies are intended to shine light in dark corners of the forestry sector – places where corrupt officials can find ways to supplement their incomes. “There’s a lot of self interest in maintaining the status quo,” she said.

Beyond the EU, the increasing demand from China for wood is likely to exacerbate illegalities in Cameroon’s forest sector, found the report, as the country does not yet have laws to keep ill-gotten timber out. This trend in Cameroonian timber flowing to China also puts European buyers at risk, if they buy finished wood products produced in China that were sourced illegally.

Hoare also researched the immediate causes of deforestation in Cameroon and found that the conversion of forests to other uses, such as agricultural plantations, mining sites and infrastructure development likely pushed up the deforestation rate between 2006 and 2010 compared to the previous five-year period.

“This has severe negative implications for Cameroon’s timber trade,” Verbelen said, “because a growing proportion of its commercial hardwood on the international market is coming from deforestation (‘forest conversion’), instead of well-managed forests.” He added that this result is “the opposite of what the EU has or had in mind initially with its FLEGT action plan.”