Could big data turn us into ocean protectors instead of abusers?

Plastic and other threats in the oceans: Turning data into action

The devastating tsunami that hit Japan in 2011 washed away millions of tons of plastic debris into the Pacific Ocean. It even swept away a Harley Davidson motorcycle that subsequently ended up on Canada’s coast.

As production and consumption of plastic increases across the world, more of it gets discarded as waste. Much of this plastic waste eventually goes into the oceans, choking marine life. In 2010, for instance, about eight million metric tons of plastic waste ended up in the world’s oceans, according to a recent study published in Science .

“That is the same as five bags filled with plastic, for every foot of coastline in the world,” Jenna Jambeck, lead author and an Assistant professor at the University of Georgia, told reporters at the American Association for the Advancement of Science (AAAS) Annual Meeting in San Jose, California this month.

With business as usual, Jambeck said, this number will double by 2025. “And if that happens, our cumulative input over the time from 2010 to 2025 will be 155 million metric tons.”

The research team looked at 192 countries and ranked them based on the amount of their mismanaged plastic waste. The countries at the top of the list, such as China, Indonesia, Philippines, Vietnam and Sri Lanka, are all middle income countries with growing economies.

These countries have not yet managed to develop a waste management system that handles the increase in waste that comes with economic growth, Jambeck said.

The only developed country in the list of top 20 countries was the U.S. This is probably because the U.S. has a large coastal population and a large waste generation rate, Jambeck added.

Many previous studies have looked at the problem of plastic in the oceans. So what sets this study apart was that the team estimated the amount of plastic entering the ocean from the land, instead of trying to measure what is already in the ocean, Kara Lavender Law, co-author and Research Professor of Oceanography from the Sea Education Association in Massachusetts, said at the meeting.

“This is the equivalent of measuring what is coming out of the faucet rather than what is already in the bathtub.”

The magnitude is hard to fathom, she added, but understanding where plastic originates is a necessary first step to designing solutions to stop the flow of plastic into the ocean. In fact, scientists argue that large-scale data like this can change the way oceans are looked at, managed, and protected.

Dawn Wright, Chief Scientist at Environmental Systems Research Institute (Esri), pointed out a few ways in which large-scale complex ocean data could be converted to easily-accessible information that anyone could use to take quick decisions.

For too many people, the ocean is out of sight and out of mind, she said at a session of the AAAS meeting. “And this is a communication challenge: that even If you don’t live near the ocean, the oceans still affect you.”

Sensors at the sea surface, all the way down to the sea floor, generate large amounts of data from the oceans over shorter time scales, she said. And the scientific community can now not only observe and analyze these data, but also package them innovatively for other informed users. Such innovative presentation of ocean data using compelling maps and stories, she said, could help overcome the communication challenge.

“This is very important for policy makers, especially those that have to make decisions over very short time spans, particularly disaster reliance,” she added.

One initiative that Wright talked about was story maps, which enables users to tell powerful stories about the oceans using a combination of data, pictures, videos, sounds, and maps. For instance, SharkGIS, a popular story map on ESRI’s platform, talks about the history of sharks, their distributions, how sharks are misunderstood, and the shark finning industry that is pushing them towards extinction. 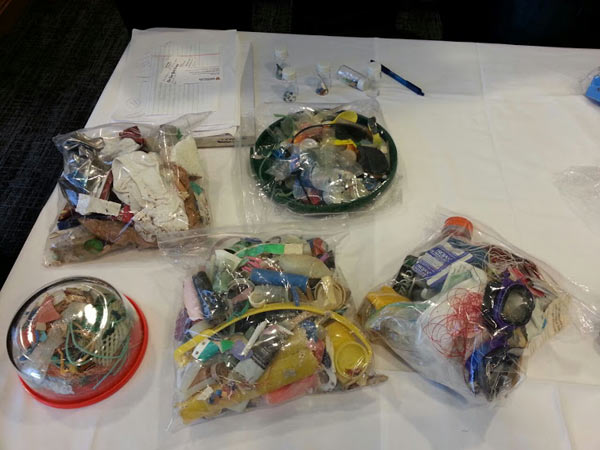 Samples of plastic collected presented by the research team at the AAAS meeting. Credit: Maitri Porecha.

Another story map—Welcome to the Anthropocene—uses creative and interactive maps to tell the story of how humans have been re-shaping the earth.

Other ESRI initiatives include using maps and apps to build climate resilience, such as before and during disasters, like floods or hurricanes. Other interactive maps show the area that could be imperiled due to sea level rise, as well as the number of people who would be displaced, Wright said.

So, there is hope in terms of how we can turn data into actionable information, she added.

“This is more than just eyeballs on a map,” she noted. “Some of us can stare at a map for hours and just enjoy seeing different distributions, but what I am talking about is more rigorous—coupling the data and spatial analysis with compelling design, such as in story maps, so that we can take decisions and actions.”