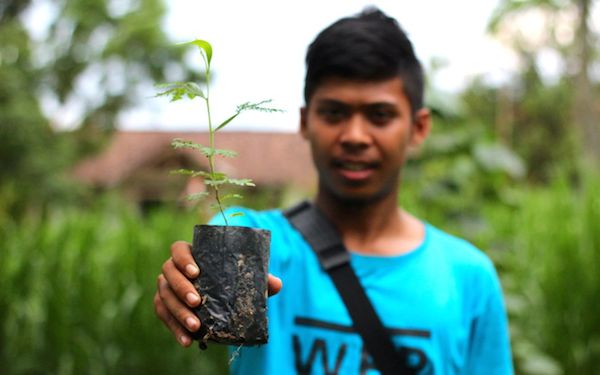 Acacia seedlings are grown and planted in and around communities in Lampung, Sumatra, to help relieve logging pressures on natural forest. Photo by Ridzki R. Sigit.

The village of Pekandangan sits on the border of Register 39, a 41,000-hectare protected forest containing the headwaters of the Way Seputih River. The Way Seputih is the longest and most important river in the area, providing irrigation to the rice fields in Lampung Tenga before flowing into the Betik swamp and the Java Sea. The protected area is also home to rare and endangered species such as Sumatran tigers (Panthera tigris sumatrae) and sun bears (Helarctos malayanus). Realizing the ecological value of the area, M. Sidik established an NGO called the Way Seputih Conservation Foundation to protect the watershed. He expected convincing the locals to stop cutting down the forest would be difficult. What he didn’t expect was that the best way to do this would be to establish a timber cooperative.

To reduce logging pressures on Register 39, several neighboring villages have been conducting an experiment in community managed timber plantations on public lands. For the last 10 years, instead of logging the forest, members of the local timber cooperative have planted thousands of seedlings such as white teak and acacia in and among the surrounding villages. As these trees mature, they are selectively harvested and replanted using sustainable practices. The project has been so successful that it has become something of a national model for community-managed forests.

The mountains of western Lampung still harbor primary forest, as well as the headwaters of rivers that supply water to the lowlands further east. While the area shown has experienced less forest loss than many other parts of Sumatra, it still lost approximately 50,000 hectares of tree cover from 2001 through 2012, according to Global Forest Watch data. However, it should be noted that some of this loss may be due to plantation harvesting and may not directly represent deforestation. Click to enlarge.

“The inauguration of the national ‘V-Legal’ logo by the Ministry of Forestry occurred here,” Sidik told Mongabay-Indonesia as he recalled the celebrated day when the Minister, Ambassador, and other officials arrived by helicopter in the village square.

The Legal Lumber Verification System is a national program with the ambitious goal to track and verify the source of all timber products sold in Indonesia. With help from Sidik’s organization, 185 community members have already achieved national accreditation of 210 hectares of sustainable production forest. They hope to expand their membership and increase production. Ideally, this will make Pekandangan and the neighboring villages the primary source of legal timber in the region.

According to Sidik, of the one million cubic meters of wood sold in Lampung, about 70 percent already comes from sustainably managed community forests. Once the government begins enforcing the V-Legal requirements, the cooperative will be able to command a premium price for their product.

He is proud of the accomplishment, but is still baffled that his NGO became involved in the timber industry. As he worked to improve the standard of living for the region’s communities, he soon found that a primary driver of deforestation was a lack of long-term security. The people were reluctant to plant trees on their land, because they were uncertain about how to manage the forest, or whether they would be able to find a market for their products in the future. Instead of stressing about these issues, it was easier to just cut the existing forest and move on. 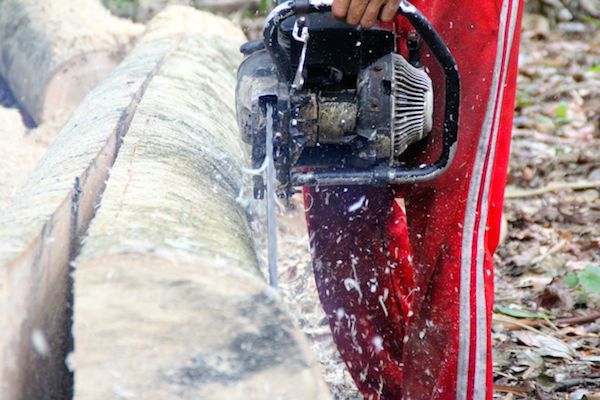 A cultivated tree takes between seven and eight years to reach a harvestable girth of 50 to 70 centimeters (20 to 30 inches). Photo by Ridzki R. Sigit.

Recognizing that the need for timber products was not going to disappear, Sidik figured the best way to protect the watershed would be to help the locals produce wood in a secure and sustainable manner. That bold idea appears to be working, and encroachment into Register 39 has been reduced considerably—but not completely.

Neighboring districts still continue to log the forest illegally, or clear it for coffee plantations. Sidik can only hope that by setting a good example, and continuing to advertise their success, the concept of community-managed timber will expand into neighboring regions.

Whether the concept spreads outside of the area or not, it continues to take Pekandangan by storm, and has already been adapted into other areas of daily life. Inspired by the success of the timber cooperative, community members have begun establishing rice and fish farming cooperatives, as well as other collective community endeavors they hope will increase security and profit and decrease damage to the natural environment upon which they depend.