This article is the first in a two-part series about carbon stock assessment in Guyana. Read the second part here.

With financial incentives encouraging maintenance of carbon stocks and the increased popularity of carbon trading between countries, a forest has become economically a lot more than a clump of trees that supplements livelihoods. A forest now has an intrinsic value by just existing, a value that can be measured in economic terms. A study recently published in Forest Ecology and Management examines the carbon stock value of forests in Guyana, finding dramatic differences between different kinds of cover and land-use types.

Tropical forests are among the most valuable in terms of carbon stocks. Globally, tropical forests sequester about 2.4 billion metric tons, according to a study published in Proceedings of the National Academy of Sciences in 2011. However, the same forests come under the most intense conversion pressures, due to factors like logging, forest fragmentation and clearing for agriculture. Another study, published in Science, showed that land conversion accounted for emissions of about 1.3 billion metric tons of carbon per year between 1990 and 2007.

In this context, programs like the UN’s REDD (Reducing Emissions from Deforestation and forest Degradation) that encourage maintenance of forests, are a viable solution to tackle the problem of forest conversion, according to many scientists and other individuals and groups working in the field of conservation. The REDD program offers incentives to developing countries to invest in low carbon paths to development by preventing deforestation and land conversion. REDD+ is an extension of the REDD program that also includes the role of conservation, sustainable management of forests and enhancement of forest carbon stocks.

The South American country of Guyana, which houses part of the Amazon rainforest, was one of the first countries in the world to submit a REDD program plan to the Forest Carbon Partnership Facility, a global partnership between national governments and other entities focused on REDD+. It was also one of the first countries to establish a national REDD program. The Guyana REDD+ Investment Fund (GRIF), funded by the Government of Norway, was set up as a mechanism to compensate countries for avoiding deforestation. 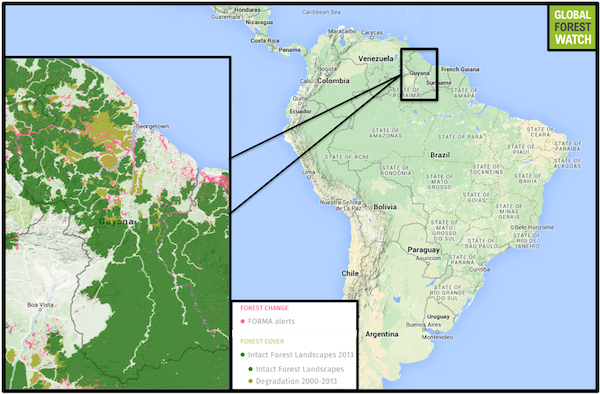 FORMA alerts indicate areas where tree cover loss is likely to have recently occurred. According to data from Global Forest Watch, there were more than 11,500 FORMA alerts in Guyana from 2006 to 2015. Click to enlarge. 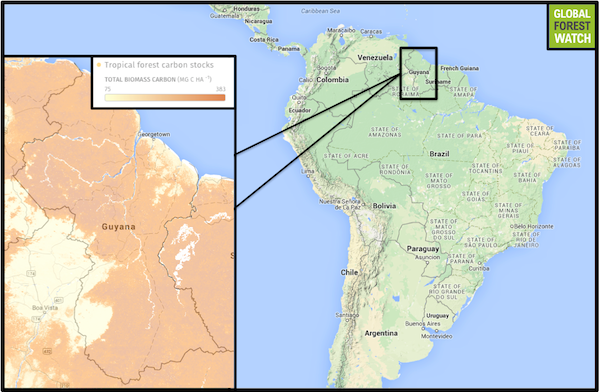 Data from Global Forest Watch shows Guyana’s forests contain high amounts of carbon. However, when it comes to pinning a number on that amount, the study by Fragoso and his colleagues indicate discrepancies between stock estimates from different sources. Click to enlarge.

Toward the end of the last century, Guyana was at the cusp of a major change. Under “visionary” president Bharrat Jagdeo, the country entered REDD and REDD+ programs to preserve its biodiversity, according to José Fragoso, a senior scientist at Stanford University who has been working in Guyana for over a decade

“He was President of Guyana from 11 August 1999, to 3 December 2011 and was very committed to maintaining Guyana’s forests and biodiversity,” Fragoso told mongabay.com. “He helped lead a global push for more developed world leaders to take responsibility for global warming and pushed for them to support REDD and REDD+.”

Jagdeo then established a Climate Change office under the Guyana Forestry Commission, which took up responsibility for climate change and REDD programs. “They undertook a national survey of carbon stocks in the country, with a combination of remote sensing and ground trothing, and data from the literature and are very advanced in this effort relative to other countries,” Fragoso said.

Funding for Guyana’s REDD and REDD+ efforts came from the Government of Norway, through its forests and climate initiative. “Norway found a financial mechanism to support the Guyanese effort, through funding for sustainable, low carbon development in the country,” Fragoso said. “The present president of Guyana Donald Ramotar continues to support Guyana’s efforts with REDD and REDD+,” he added.

To become part of REDD/REDD+, accurate measurement of the amount of carbon stocks is the first step. After initial assessments, systems for subsequent monitoring and reporting of carbon pools need to be put in place. A combination of remote sensing and “ground truthing” methods are generally used for carbon stock assessment and monitoring. Remote sensing involves using satellite imagery to analyze forest cover in a particular area. Ground truthing is the procedure followed to validate remotely sensed data — it involves physically going to the places covered by remote sensing procedures and checking if forests are really there, what their quality is, what species are present and so on. Fragoso directed a study, Project Fauna, which trained local, indigenous technicians to assess carbon stocks and monitor flora and fauna in the Rupununi region of southern Guyana. The results published by Nathalie Butt, Kimberly Epps, Han Overman, Takuya Iwamura and senior author Fragoso showed extreme variation in carbon stocks between the titled lands, indicating the difference in vegetation types and usage patterns. Another pattern was the difference between North and South Rupununi. The two areas are separated by the Kanuku mountains, are geographically distinct, have different soil types, are politically separate, and are inhabited by communities that speak different languages and have different cultural practices. The differences were so stark that the data had to be treated as two separate entities.

As discussed in their paper, the researchers found that uniformly undisturbed control sites had higher carbon densities per hectare than village areas. However, there was no difference in the average tree diameter size between control and village sites, implying that the forests were approximately the same ages. According to the researchers, there was a difference in the amount of carbon per hectare because trees near villages are harvested to some extent.

In Guyana, some indigenous communities have received “titled lands,” and have rights to the forests and aboveground resources within their boundaries. Fragoso and the team included titled lands in their estimations so that landowners can have a better estimate of the carbon stocks of their land. They found rather obvious differences between titled lands, according to how the particular area had been used in the past.

“In general, local technicians were motivated to be as accurate as possible as they had a vested interest in knowing how much carbon is held on their titled lands, now that it has value through the climate finance mechanism,” the authors write.

The researchers assert these patterns drive home an important point: there cannot be a single carbon value for a country’s forests. Carbon values differ according to forest type and usage pattern; for instance, carbon values from undisturbed forests cannot be applied in inhabited community lands. “Differences in carbon densities between forest types is policy relevant, as it can inform both the UN/program bodies, and developing countries, on the value of investing in expensive ‘Tier III’ assessments (satellite imagery and ground measurements),” the authors write.