A Cerekang district resident in a traditional canoe, which is a major mode of local transportation. Photo by Eko Rusdianto.

Home to some 400 fishermen, Manurung village appears unremarkable at first glance: quiet houses along a winding river lined with boats. However, behind the village lies something remarkable: a tract of old-growth forest nearly untouched by human exploitation. Pensimoni Hill stands as a rare outpost of towering trees rising above freshwater springs that provide clean water and life for the villages below.

Pensimoni Hill is sacred land, and according to the locals is where Batara Guru, the first human, stepped foot on the planet. The forest is so highly regarded that nobody is allowed inside of it.

In the modern system of governance, the village head is the recognized manager of the forest. However, according to the traditional culture—which still runs deep here—the forest is maintained by two “Pua”: a man and a woman elected by the village elders through spiritual revelation. The two share responsibility for protecting the forest: the man maintaining the relationship between humans and the creator, while the woman solves issues between humans and the earth. In 2010, the male Pua died, and has yet to be replaced. However, his counterpart, a 70-year-old woman named Sahe, still regulates activities in Cerekang District. Sahe is wheelchair bound, the result of a stroke that also robbed her of the use of the right hand and makes speaking difficult. When Mongabay-Indonesia asked her why entrance to the forest of Pensimoni Hill is banned, she responded simply, “Nobody may enter. Nobody may enter. That is the way it has always been.” According to Sahe, even the poorest resident of Cerekang will seek alternative areas to log if they need the money.

There are eight community forests in Cerekang including Pensimoni, all of which are designated as permanent forests that may never be developed or farmed. The residents of the area live in close harmony with nature, and the forest, the river, and their occupants are all players in their spirituality. In their belief there are three worlds: the upper world, inhabited by god; the middle world, earth; and the underworld, which exists below the water.

The seasonal run of fish, which is the primary source of income for locals, dictates the pattern of life here. The river is considered sacred, believed to be inhabited by spirits of the underworld, and therefore must not be polluted.

“In today’s language, they are called crocodiles, be we call them grandmother,” said Muchsind, a member of the community. “I swim in this river. Occasionally, grandmother will pass by me. As long as we don’t disturb her, she won’t disturb us.”

To this end, the people do not throw their trash in the water, nor do they use soap in it. Instead, they haul water up on land for bathing. 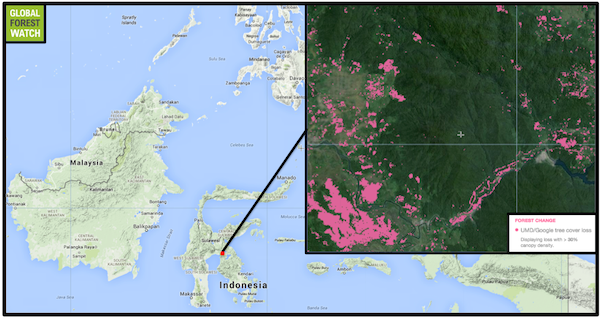 According to Global Forest Watch, the region surrounding Pensimoni Hill lost approximately 2,000 hectares of tree cover from 2001 through 2012, amounting to about 7 percent of its total area. Click to enlarge.

Pensimoni Hill may be protected by local belief, but it is not safe. In the early 2000’s, the high price of hardwoods made it a tempting target for illegal loggers from outside the region. Less than two kilometers from the village, the fringes of the forest have been reduced to bare earth. Not much further away, oil palm plantations continually extend their reach.

“Our forest is everything to us,” the village head, Irwan Jafar explained, “we couldn’t bear to see Pensimoni become an oil palm plantation.”

He and his neighbors are worried this encroachment will soon run them over, and are working hard to develop documentation to make the case that the forests around the village must be protected under customary-use laws. He hopes the regency government will officially recognize the eight tracts of customary-use forest and protect them from development. He hopes this can happen before the sacred forest of Pensimoni Hill is leveled for short-term economic gain.